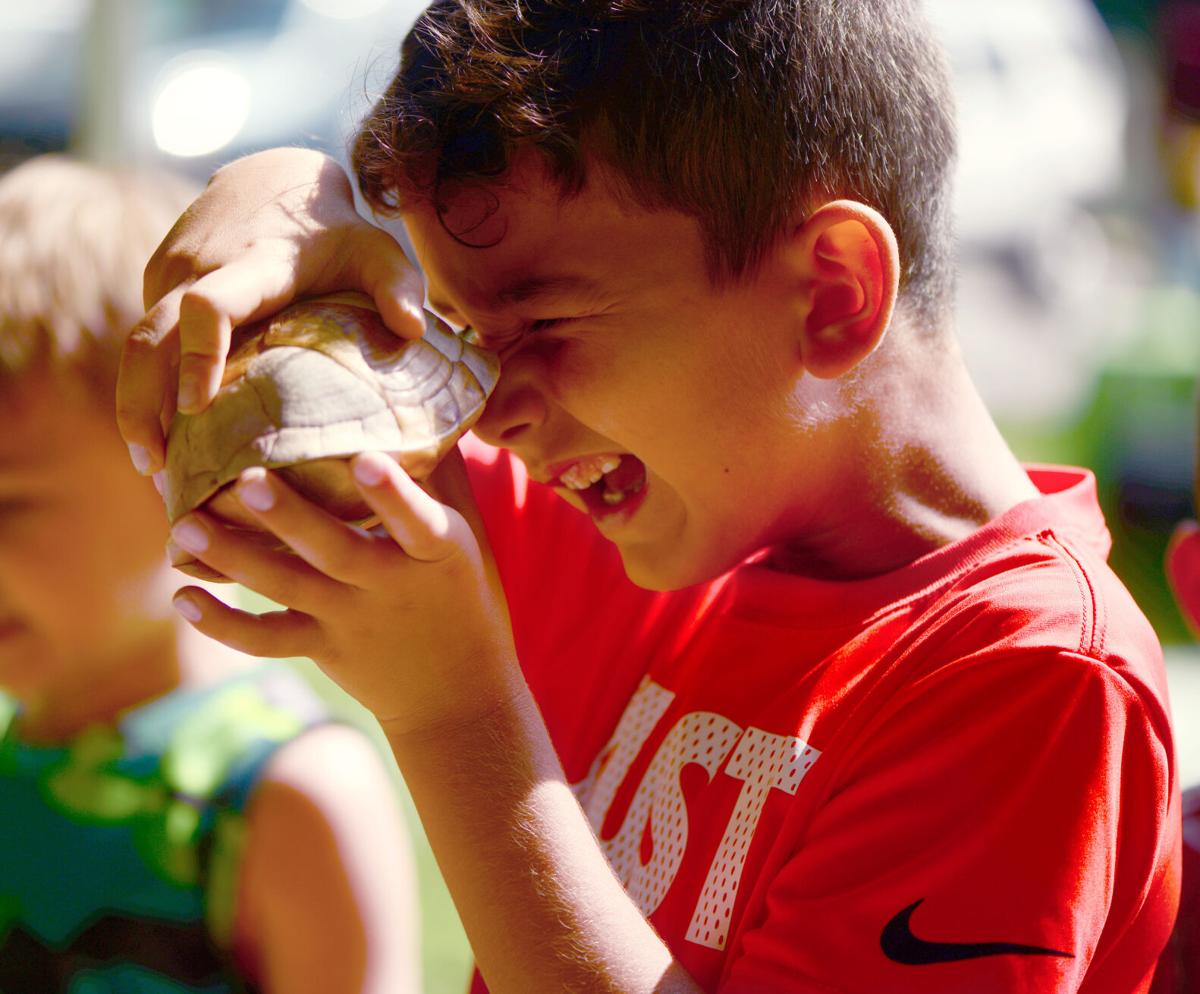 Gatlin Lucas, 7, looks inside a turtle shell during the Water Festival on Saturday at Rock Bridge Memorial State Park. Steve Ferguson, a naturalist, talked about the different native turtle species of Missouri as the children examined the specimens displayed. 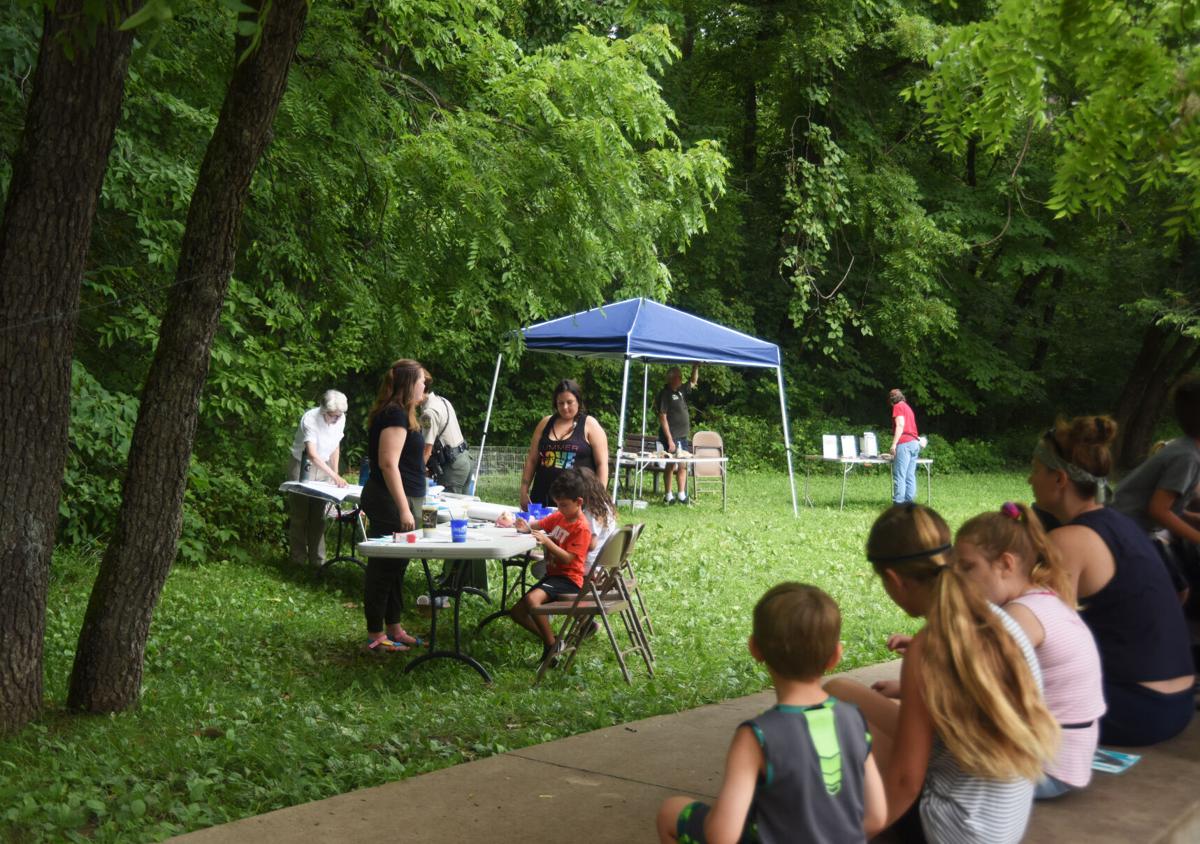 Rock Bridge State Park hosts a water festival at the Devil’s Icebox Trailhead Saturday in Columbia. Children joined volunteers and naturalists for a morning of catching aquatic animals in the stream, seeing turtles and learning about stream ecology. 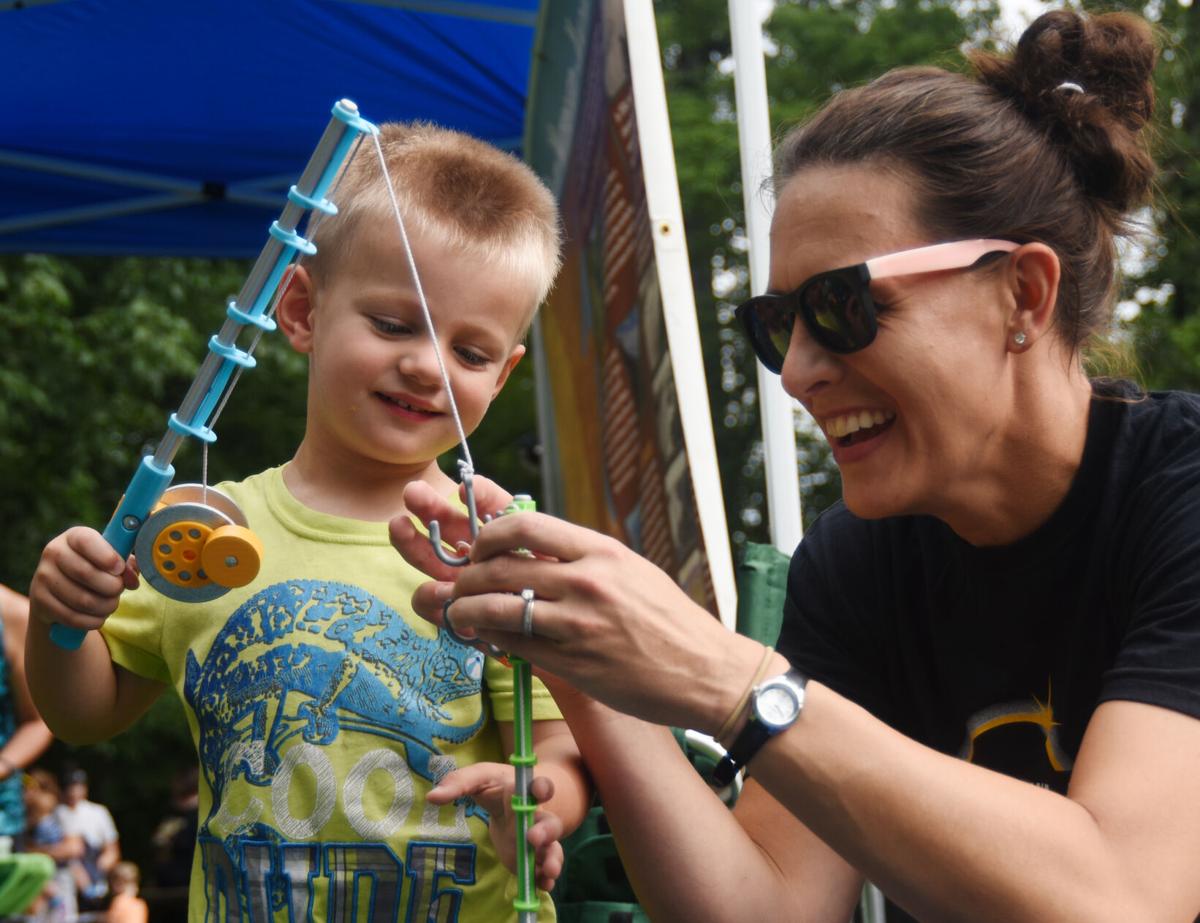 Henry Noe, 2, plays with his mother, Jackie Noe, at the artificial fishing area Saturday at Rock Bridge State Park. “Oh, you caught a fishing pole,” Jackie said as she untangled the fishing poles. “We have a sticker chart, and the week they do something good they get a reward. This (the Water Festival) is their reward.”

LEFT: A child plays at the stream table during the Water Festival Saturday at Rock Bridge State Park. The granules are made up of recycled table tops. The various-colored granules have different weights to mimic the different behaviors of rocks in a stream. RIGHT: A three-toed box turtle sits in an enclosed space during the Water Festival. One of the children decided to name the 25-year-old female turtle Shelly. After the festival, she was to be released back into the stream where she was picked up. 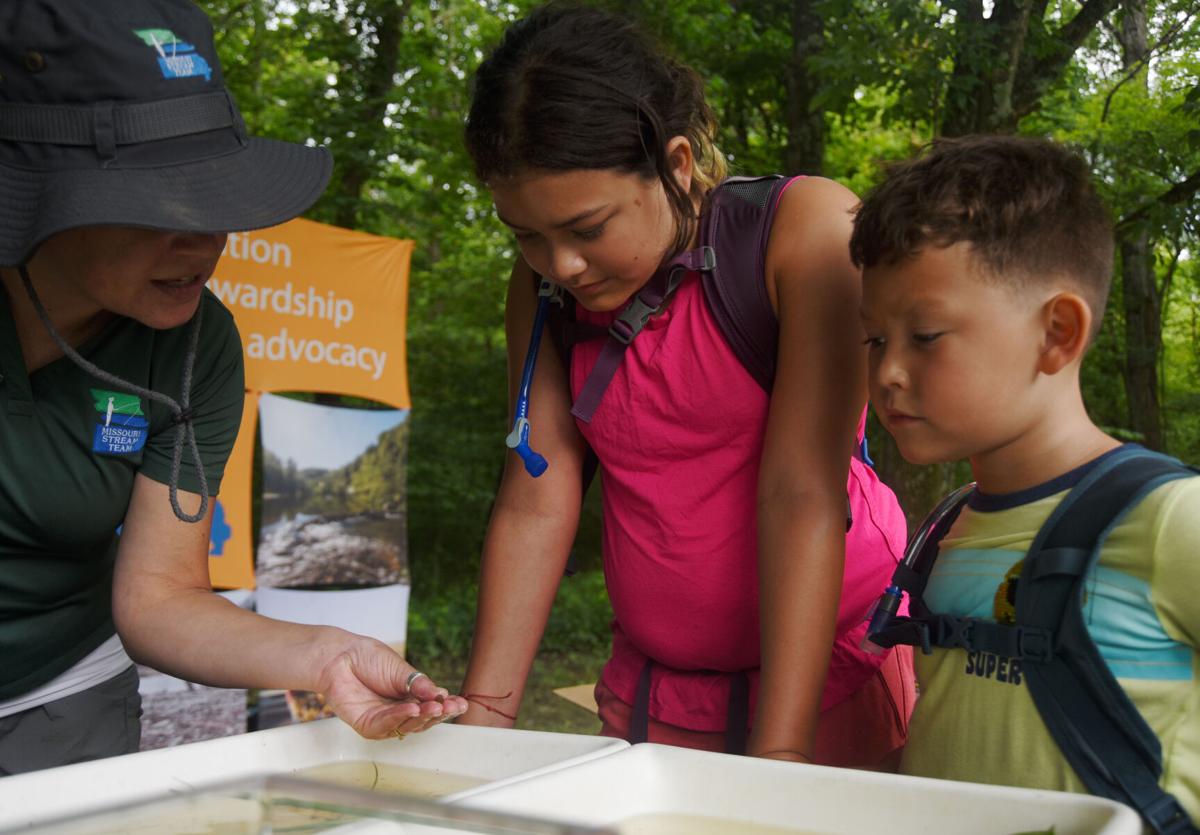 From left, Amy Meier explains aquatic stream life to Ariana Diaz, 11, and Antonio Diaz, 6, at the Water Festival on Saturday. “I didn’t know dragonflies ate mosquitoes and their larvae,” Ariana said. “I thought they ate something else.” 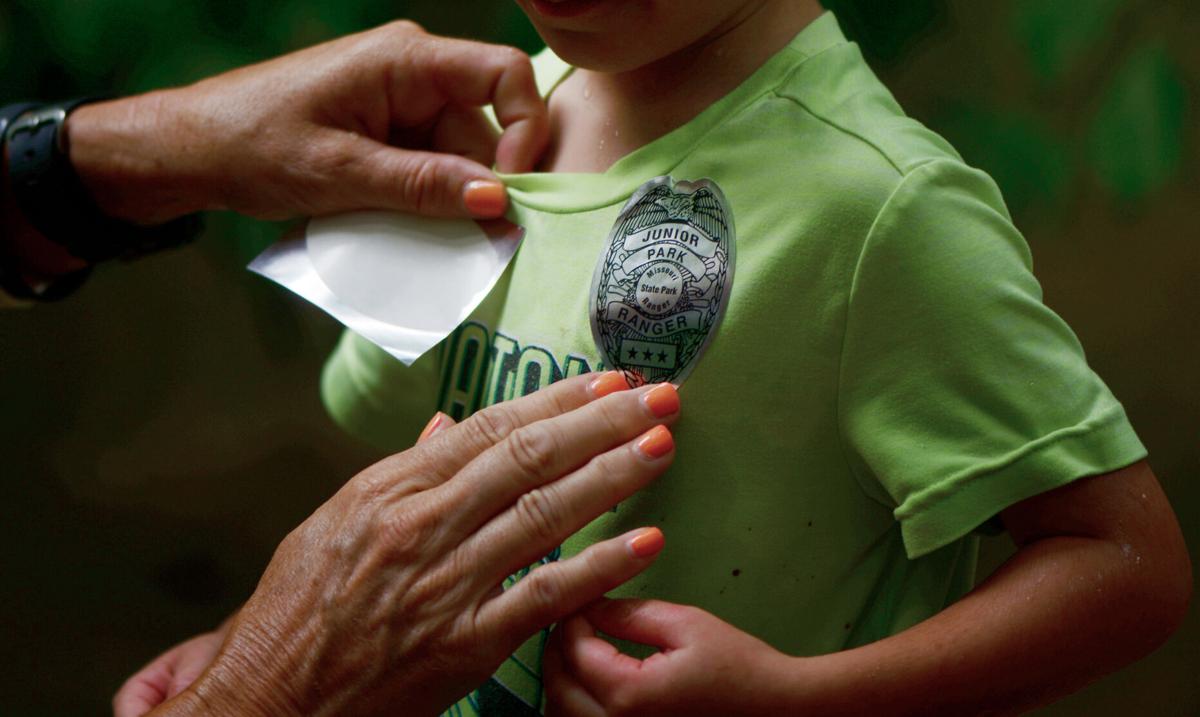 Gary Cokerham, 3, receives a junior ranger sticker from Erika Burns, park ranger, Saturday at the Rock Bridge State Park water festival. Burns said it was important to educate the children about the importance of streams, their ecology and how to help protect them.

Colorful watercolor paintings, made with water from Gans Creek, whip in the wind on a laundry line tied between two trees early Saturday morning. Down the path, children search the creek’s edge for rocks and critters.

The sun beats down on another day at the Devil’s Icebox trailhead, marking the beginning of Rock Bridge Memorial State Park’s 2021 Water Festival.

The annual event educates children and their families about the impact of waterways and the importance of keeping them clean.

Each organization set up its own booth. At one station, children built their own streams and creeks with malleable material and plastic houses to learn about natural topography. Another offered kids’ coloring books about streams. Nearby, volunteers from Missouri State Parks greeted visitors with a three-toed box turtle.

One booth advocated for the Bonne Femme Watershed Project, a proposal for a watershed-based plan that would restore and protect water quality. The current draft of the plan recommends updating the 100-year flood-plain maps and regulations, purchasing and correcting structures that flood and limiting construction near streams.

“They can bite, so don’t stick your finger in there,” Stream Team biologist Amy Meier warned kids poking at the water scorpions.

The exhibit illustrated how water insects frequently act as water quality indicators. Bugs such as scuds and mayfly nymphs get oxygen directly from water — their absence indicates an unhealthy waterway.

Meier coordinates Stream Teams in the northwest, northeast, central and Kansas City regions of Missouri. The organization trains people as stewards of river conservation and frequently cleans waterways. Participants can join a team and even “adopt” a stream or lake access point to care for.

People should be diligent about dumping things in the river, Meier said. Over the past 30 years, more than 13,000 tons of waste has been removed from Missouri waterways.

“We like to connect people to the river,” Combs said. “Get them right down in it to experience it firsthand.”

Payton Reed, 6, visited the festival with her brother and family after they heard about it from Facebook. Her father, Jim, said he wanted to expose the kids to nature and local waterways.

After visiting the River Relief booth, Payton stopped by the creek. When she found a piece of glass in the water, she ran back to the booth to add it to their collection of “river treasures.”

“She got the message,” Malley said with a smile on her face. “It doesn’t always happen that quick!”

Combs said it’s important to engage children in nature early on so they’re passionate about caring for the environment when they’re older.

Water festival will begin at 9 a.m. with activities for children and families to learn about the streams environment.