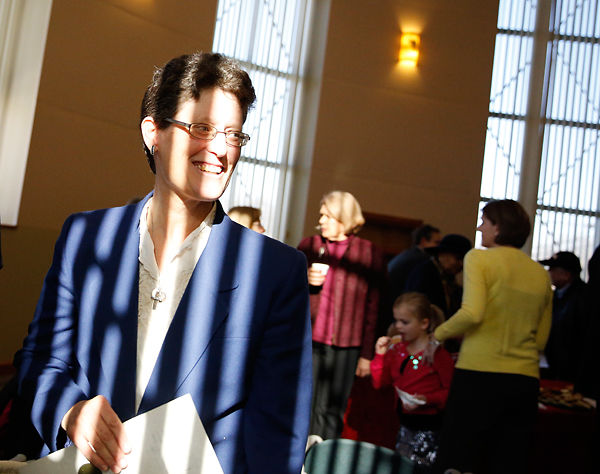 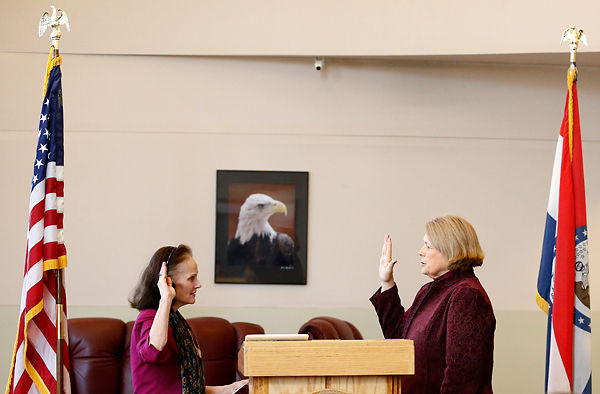 Karen Miller, re-elected in November 2012 as Boone County Southern District commissioner, takes the oath of office during a ceremony at the Boone County Government Center. 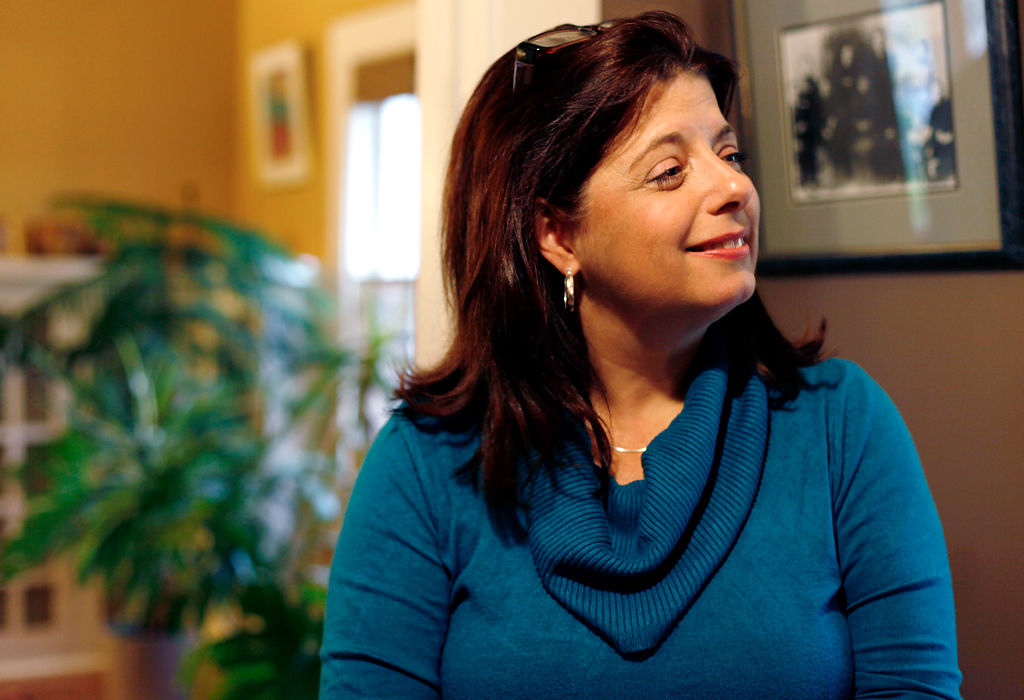 Candidate for Boone County Recorder of Deeds Nora Dietzel speaks with guests at a fundraising party hosted by neighbor Margie Sable on Oct. 12, 2014. Dietzel has worked in the recorder of deed's office for 17 years. 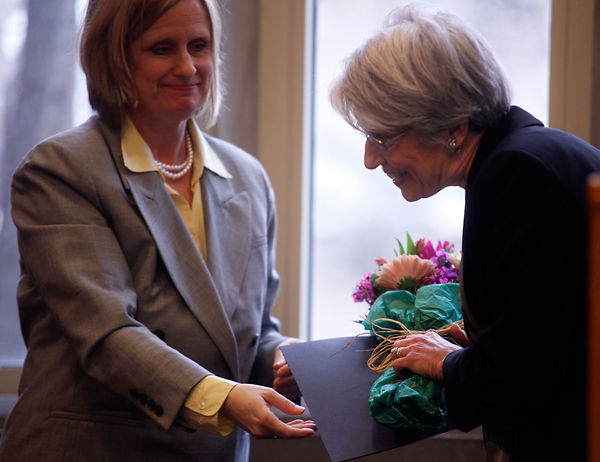 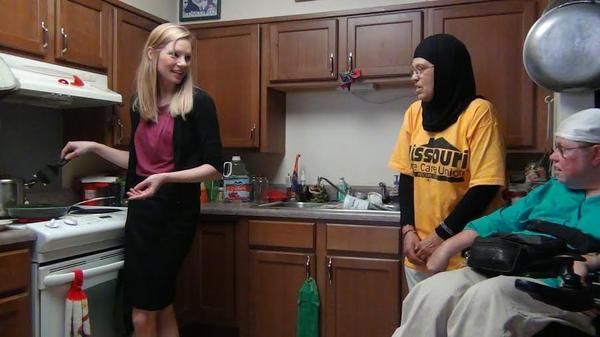 Nicole Galloway meets with attendant Karen Brickey and Marcie Luebbert in Luebbert's home. Galloway spent a day learning how Luebbert's attendants assist her with day-to-day activities and allow her to remain active in the community. Galloway, Boone County treasurer, has been appointed new state auditor.

Karen Miller, re-elected in November 2012 as Boone County Southern District commissioner, takes the oath of office during a ceremony at the Boone County Government Center.

Candidate for Boone County Recorder of Deeds Nora Dietzel speaks with guests at a fundraising party hosted by neighbor Margie Sable on Oct. 12, 2014. Dietzel has worked in the recorder of deed's office for 17 years.

Nicole Galloway meets with attendant Karen Brickey and Marcie Luebbert in Luebbert's home. Galloway spent a day learning how Luebbert's attendants assist her with day-to-day activities and allow her to remain active in the community. Galloway, Boone County treasurer, has been appointed new state auditor.

COLUMBIA — One day in 1996, Vicky Riback Wilson received a surprising call from trusted friend and local politician, Chris Kelly, encouraging her to try something she had not thought of before. Months later, Wilson would become the first woman from Boone County to serve a full term as state representative.

"Boone County officials have been majority female for over 20 years," Wilson said. "That creates a very different dynamic from what you find elsewhere."

In Boone County, seven of 13 elected officials are women. All are white, though Sonja Boone, who is the unopposed candidate for Boone County Public Administrator, is a woman of color. Data from the 2015 Missouri Fact Sheet from the Status of Women in Government shows that as of last year, there were no women of color in statewide elected executive office in Missouri and no women of color from the state in the U.S. Congress.

After Wilson finished her term the next two state representatives from her district, which includes Columbia, also were women. Wilson thinks other women felt more comfortable running for office after seeing her in the job.

"If you grow up and only see one kind of person in a position, your subconscious expectation is that that's who belongs there or that's what it takes to be there," Wilson said. "Once people start to see a particular image for a position, it's much easier to accept the next one."

"I was really fortunate when I served in Boone County because the majority of officials in the courthouse were women. That was very unique," Galloway said. "I saw strong women lead. It made me more confident about running for my position. Not everyone has had the example that I had."

Of the six current Missouri executive branch officials, Galloway is the only woman. When speaking on panels with other officials, Galloway said she frequently gets asked how she handles being a mother and a government official, a question she said her male counterparts never get.

"I'm happy to take those questions if it can help create a more supportive environment of women in government," Galloway said.

Galloway said she has spoken twice at Missouri Girls State, a program that teaches high school girls about what it's like to lead in government positions. Both times Galloway spoke at the program, the high schoolers said it makes a difference to see a woman in government office.

"You need that example to take that first step," Galloway said.

An article on gender perceptions and political candidates published in the American Journal of Political Science in 2011 found that "despite comparable credentials, professional backgrounds, and political experiences, highly accomplished women from both major political parties are substantially less likely than similarly situated men to perceive themselves as qualified to seek elective office."

Boone County Commissioner Janet Thompson worked as a public defender for 25 years before she was encouraged to run for commissioner in 2012.

"Two people who had been in government in Boone County suggested that this was something I ought to try," Thompson said. "I don’t know if I would have thought of it by myself."

Karen Miller, a Boone County Commissioner since 1993, was involved in other political campaigns before running for office. This experience informed her knowledge of what it takes to be elected. When the commissioner position opened up in 1992, she felt she couldn't support any of the candidates running.

"I said, 'I can't support any of them, I could do a better job than they can,' and one of the guys in the meeting said, 'Well, I got the paperwork out in the car — I'll just go get it,'" Miller said. "And he did, and that's just how it happened. It was a fluke. I had not planned on running."

When Miller served as president of the National Association of Counties from 2003 to 2004, she wanted a diverse group of people in the organization's cabinet. She put in place an application process to find the best people for the job. She was disappointed when only white males applied because she wanted people of color and women represented in the cabinet. She took matters into her own hands and recruited two women she felt were qualified.

"We have to change the mindset of women," she said. "Don’t self-select that you are not qualified."

Studies in the gender perceptions 2011 article also found that "not only are women more likely than men to doubt that they have the skills and traits necessary to succeed in electoral politics, but they are also more likely to doubt their abilities to engage in the mechanics involved in a political campaign."

"It's psychological. We have got to break that barrier before we are going to break the rest of the barriers," Miller said.

Miller said people in Boone County have good role models, "so there should be no excuse why they can't find someone who can help them excel wherever they want to go.”

Thompson said representation of women in county government is different in Boone County than in other counties throughout Missouri.

"I mean, you go to county commissioner meetings for the entire state and you can count the women on both hands, easily. There are so few," Thompson said. "To have two women on the county commission here is just stunning."

Nora Dietzel, the Boone County recorder of deeds, was encouraged to run by Betty Johnson, who held the position for 39 years.

Thompson said there is a supportive network of women in Boone County government.

"When you are in that position, you might have one hand forward grabbing the person ahead of you," she said, "But you make sure that there is one hand behind you, so that you reach back and make sure that no one is left behind.”

Reporter for the Columbia Missourian