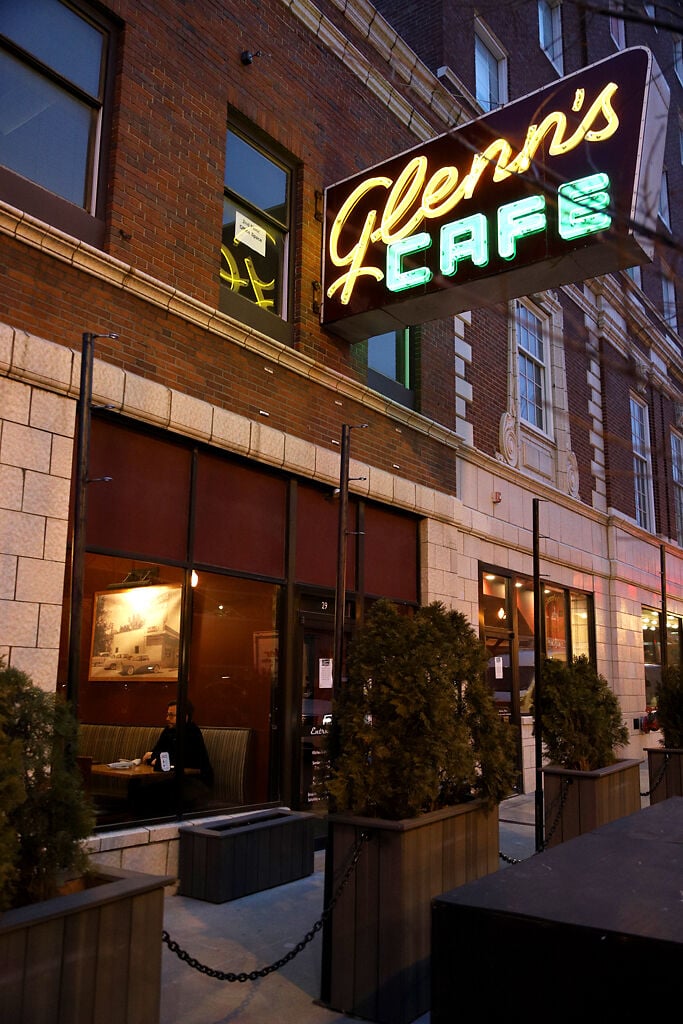 A customer dines in at Glenn's Cafe on Feb. 24 in Columbia. Glenn's Cafe joined other restaurants around town for a Restaurant Week bingo game by The District that encouraged people to pick-up, order, dine-in or try out a new venue. 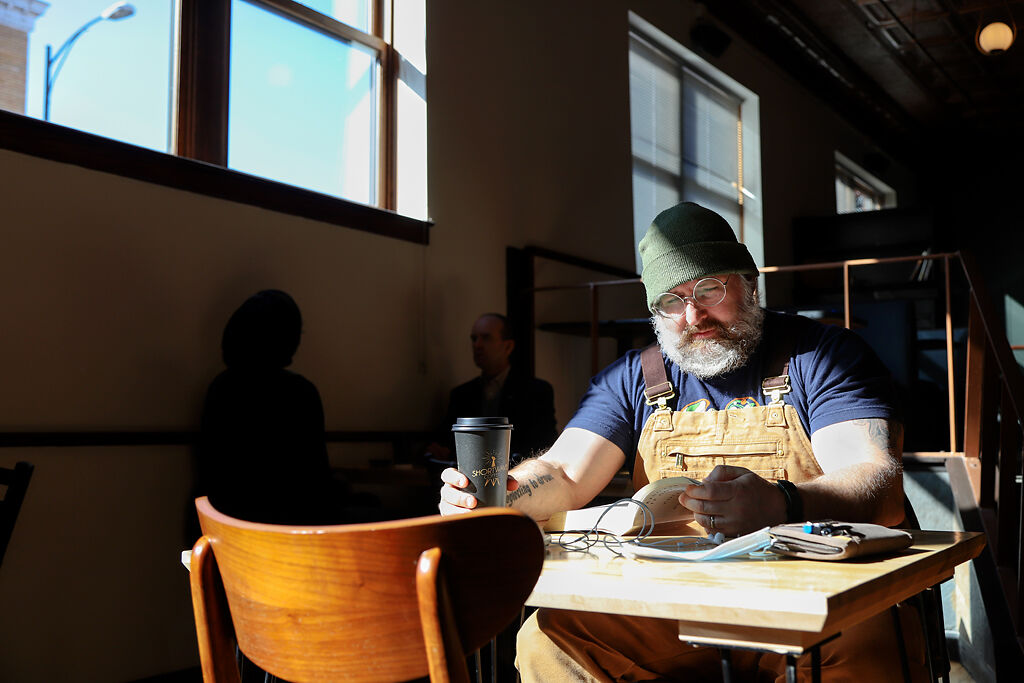 Noah Siela drinks coffee and reads Feb. 26 at Shortwave Bakery in Columbia. Shortwave Coffee soft-opened a second location on Ninth Street in late January that chiefly serves as a bakery. 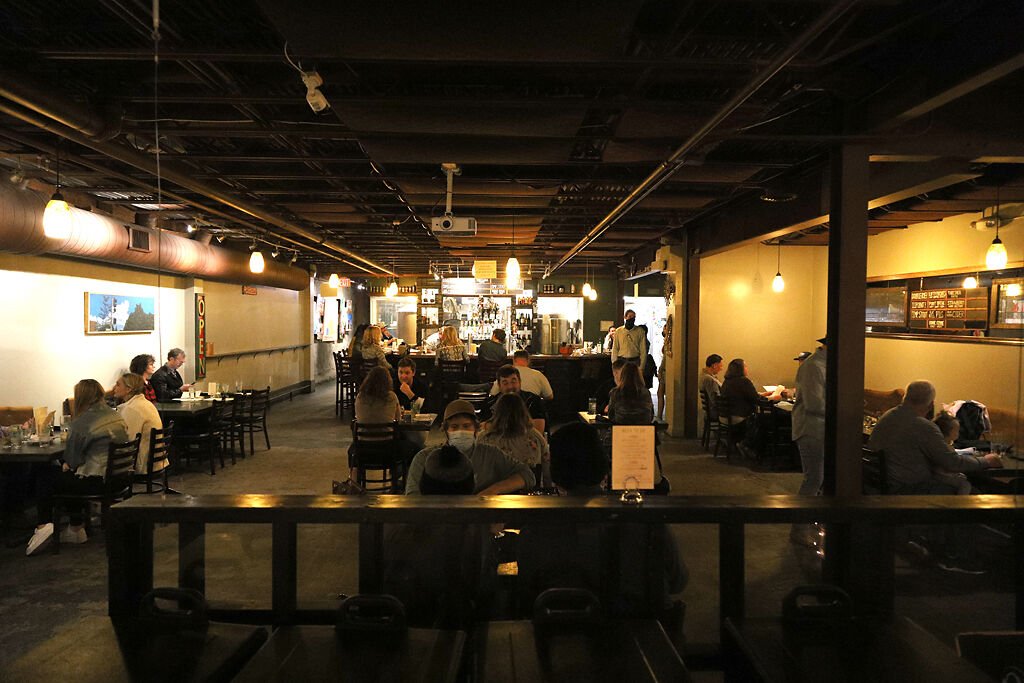 Customers drink and dine Feb. 27 at Broadway Brewery in Columbia. Broadway Brewery added a new bourbon made by Widow Jane to its menu for Restaurant Week and encouraged customers to stop by and participate in the bingo game. 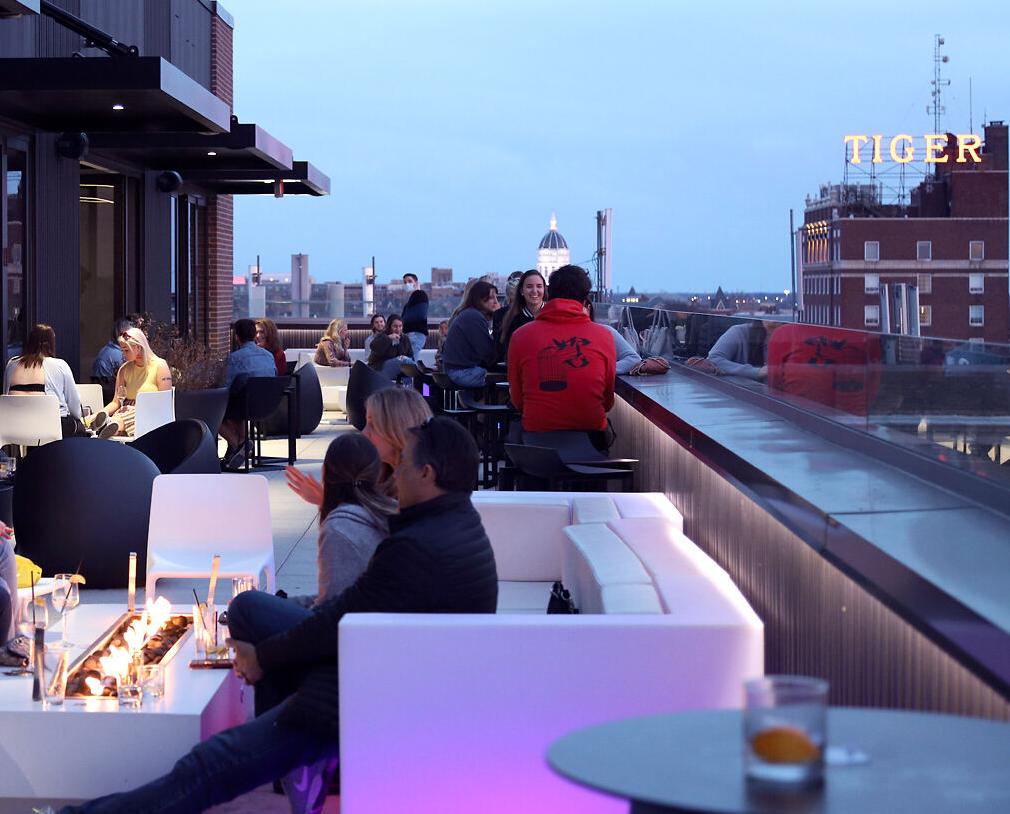 Customers sit outside of Pressed on Feb. 27 in Columbia. Pressed, located downtown, was almost at capacity as afternoon temperatures reached 70 degrees. 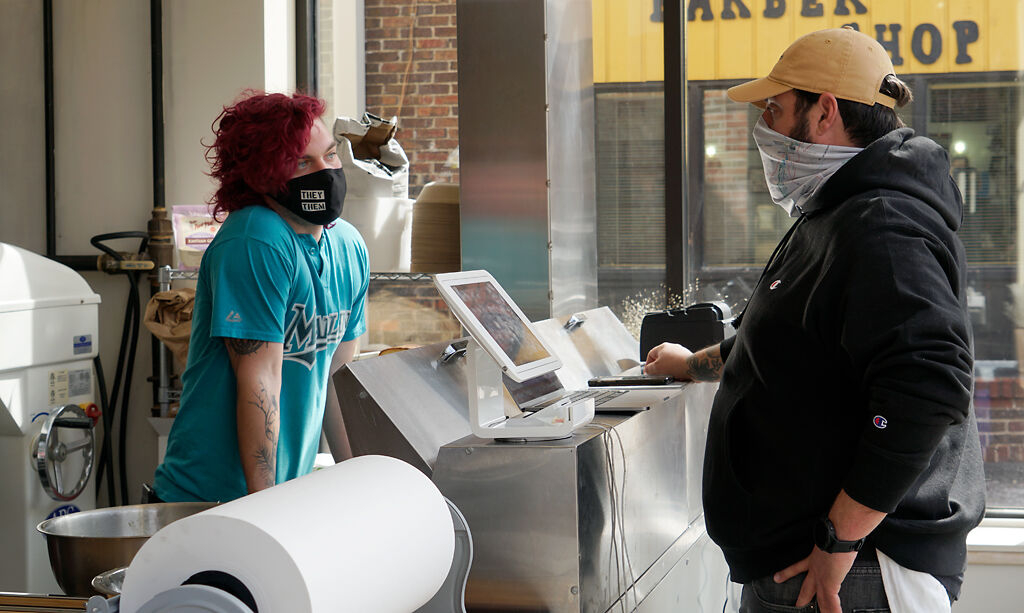 From left, Casey Callans, Strollway Market chef, and Benjamin Hamrah, Strollway general manager, finish up their work Friday in downtown Columbia. The restaurant opened for regular business Tuesday after soft-opening events Friday and Saturday. "We learned a lot of things," Callans said. "It gives us a lot to go off of for the next couple days." 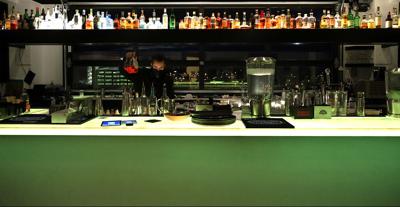 The brick-and-mortar restaurants and bars decorating Columbia during this early March look a bit different than they did last year at this time, as both the world and our community have been faced with new challenges because of the COVID-19 pandemic.

When businesses were forced to adjust to COVID-19 restrictions and protocols last year, many restaurants had to change existing business models in order to stay afloat in a new, socially distanced world. Some found plans that worked, while others were forced to close for good. And, despite obvious hardships, Columbia has still made way for new restaurants.

Casey Callans — working with Beet Box bosses Amanda Elliott and Ben Hamrah and Harold's Doughnuts' Melissa Poelling and Michael Urban — is head chef of The Strollway Market, a deli that serves up fresh soups, salads, sandwiches and more out of the downtown Harold's location.

Callans, who has also worked at Café Berlin and Nourish Café + Market locally, and crew held a soft opening Friday and another Saturday after announcing the "super secret and very limited" events on The Strollway Market's Instagram page.

The Strollway Market officially opened Tuesday and will be open 10 a.m. to 2 p.m. Tuesdays through Saturdays. The deli will only be accepting online orders through its website until further notice.

Pizza Tree owner Amanda Rainey and friend Sarah Medcalf made up another team, one that brought the pop-up shop Goldie’s Bagels to Pizza Tree in August. From 7-11 a.m. Tuesday through Sunday, you can find this New York-style breakfast being served out of the Pizza Tree window at 909 Cherry St. Along with the staple plain bagel with cream cheese, Goldie’s serves some of its own creations, such as the Goldie, a turmeric and black sesame bagel; and cream cheeses like lemon zest and vegan cashew tahini.

Take-out orders, curbside pickup and third-party delivery apps are all things restaurants have had to acquire in order to keep the orders coming. After surviving a long 11 months of empty bar rails, Willie’s officially reopened two weeks ago and announced it would be using LineLeap, an app that allows people to reserve tables at restaurants.

“This will allow us to provide a great experience that limits large gatherings of customers awaiting entry,” the Willie’s Instagram post said.

Guests will be able to use the app to reserve a table at Willie’s for two to three hours at a time. Willie’s releases time slots and tables that are available, and from there guests are able to reserve their spots on LineLeap. Once a reservation is made, everyone in the group must be present in order to receive the reserved table.

A few doors down from Willie’s, in the old Penguin Piano Bar space, is a new tenant: The Gold Bar. The restaurant and bar filled the space in December after Piano’s 10-year run ended in late August because of the pandemic.

With Columbia’s new health order, which went into effect last Thursday, restaurants are allowed a bit more wiggle room, with businesses returning to normal operating hours along with other changes.

Here’s a look at some other recent restaurant news:

The new location was built to be more “coffee-focused” than Shortwave’s other location, which is still nestled comfortably at 915 Alley A, owner Munir Mohammad said.

“We’re packed every day,” Mohammad said. “Our focus now is trying to get the pastry and food menu going as soon as possible.”

Shortwave’s new expanded menu is expected to feature a variety of new items, including baked goods and pastries such as house-made cookies, croissants and pecan rolls, with some savory pastries as well, Mohammad said. The other location still serves as the familiar roastery.

The new location at the corner of Ninth and Cherry Street is open from 8:30 a.m to 6 p.m. every day.

“We’re hoping to expand our hours as we hire more people,” Mohammad said.

Another coffee name in town, Camacho Coffee, recently pivoted from selling its products only online and in grocery stores to opening its first physical location. The 1,250-square-foot space in south Columbia at 4009 Frontgate Drive, Suite 101, will replace the local coffee company’s shared kitchen with B&B Bagel Company.

In other coffee news, downtown Columbia’s Dunkin’, located at 821 Elm St., near Shakespeare’s Pizza, is permanently closed. The coffee and doughnut chain closed its doors downtown earlier this year.

Dunkin’ was added to the list of corporate companies forced to make significant changes because of the COVID-19 pandemic when it announced in its second quarter results for 2020 that it would be closing 800 of its locations, or roughly 8% of all locations, by the end of 2020. The report said the closed stores represent just 2% of the company’s systemwide sales from 2019.

The Starbucks downtown on Ninth Street was also recently closed for a period of time, but it has since reopened for mobile and carry-out orders. Its indoor dining area is still closed.

The scene of local Mexican cuisine has expanded in recent weeks.

On the other side of town, on the Business Loop, is Crazy Good Burritos, a California-style burrito joint that came to Columbia late last year.

Crazy Good Burritos is open through its drive-thru from 7 a.m. to 7 p.m. Monday through Friday and from 8 a.m. to 8 p.m. Saturday, offering a breakfast menu in the mornings.

“A taste of Mexico the whole family can enjoy” is the slogan owners José and Megan Hernandez continue to use to describe their restaurants.

“We may have an updated space, but we're still that family-friendly, go-to neighborhood spot,” Megan Hernandez said. “That's the way we want the atmosphere to feel.”

The Mexican restaurant celebrated the opening of its new place last week with a live mariachi band performance at both its locations in Ashland and Columbia.

Coley's American Bistro is one of many restaurants worldwide that has experimented with virtual brands and/or ghost kitchens, and its Brassy Bird went from initially being a delivery-only chicken sandwich outlet to a pickup operation, too, out of the Coley's location at 15 S. Sixth St.

Cajun Crab House is another outlet that's expanding. With both a seafood restaurant and market in Columbia, Cajun Crab House will soon open another restaurant in Boonville, which will operate out of Yummy’s Donut Palace at 422 E. Ashley Road. The new shop will have a dining room where guests can enjoy its seafood dishes.

Here's a list of some other new restaurants and closures in Columbia:

The Gold Bar restaurant will open in the downstairs area on Dec. 26, while Club GB will have a soft opening Friday.