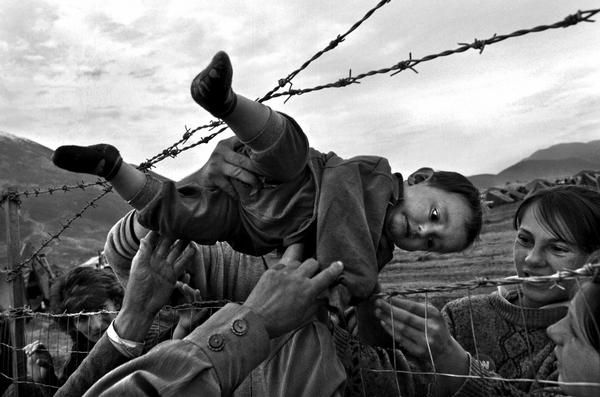 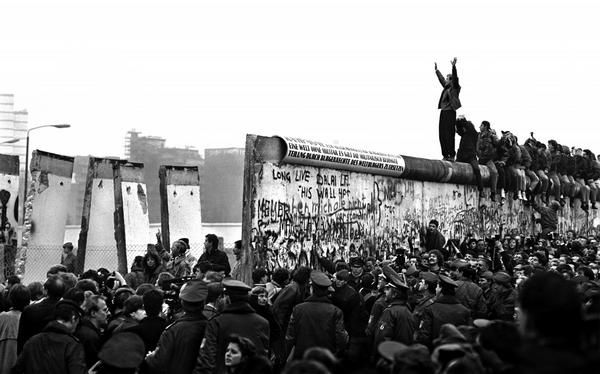 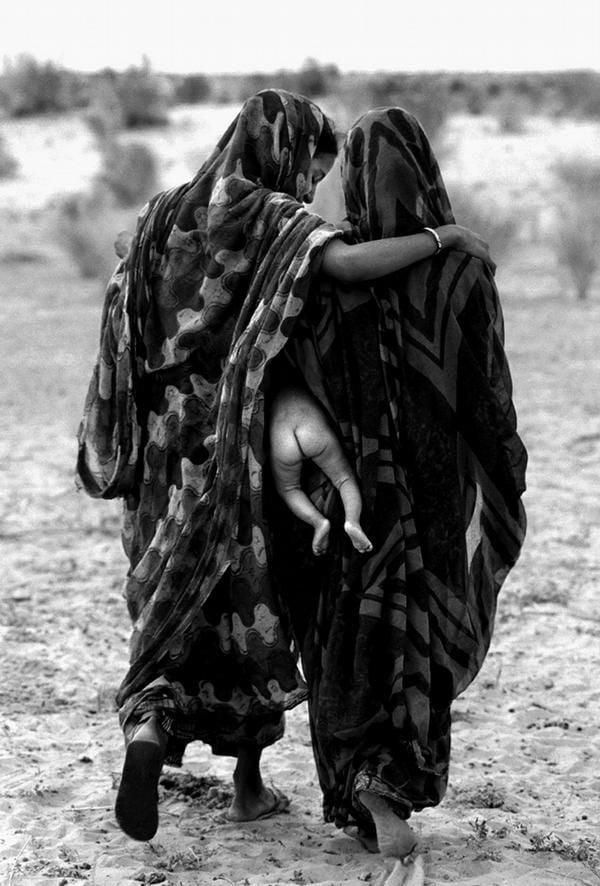 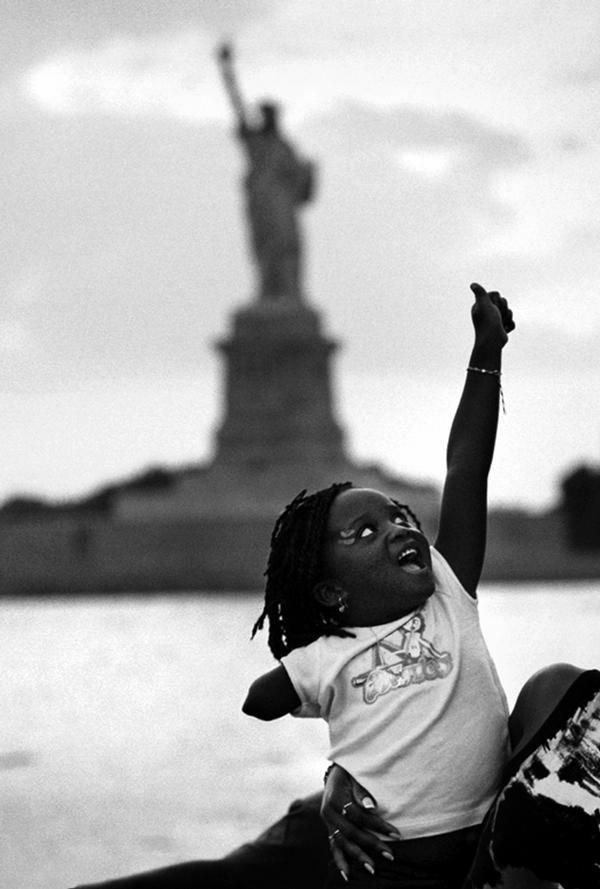 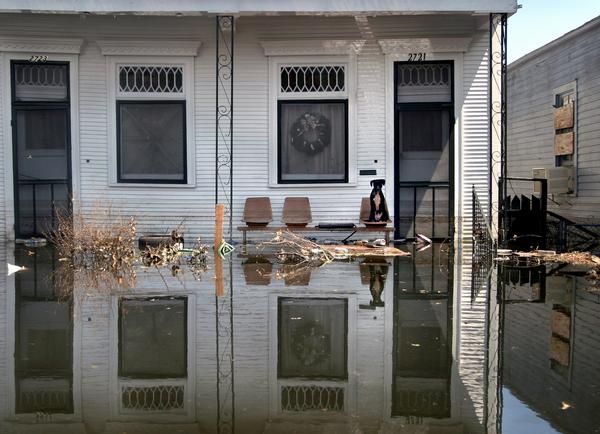 COLUMBIA — In her professional career, Carol Guzy has witnessed the fall of the Berlin Wall and has documented the state of New Orleans after Hurricane Katrina.

Guzy, a four-time Pulitzer Prize-winning photojournalist for The Washington Post, is one of seven recipients of the Missouri Honor Medal this year. The award, which is sponsored by the Missouri School of Journalism, honors journalists and strategic communicators for their career-long service and dedication to the industry.

Guzy's online portfolio contains images from around the world — some of grief and devastation, others of joy and relief.

Below, Guzy highlights five photographs and discusses the stories behind her images.

Agim Shala, 2, is passed through the barbed wire fence into the hands of grandparents at a camp run by the United Arab Emirates in Kukes, Albania. The members of the Shala family were reunited here after fleeing Kosovo. The grandparents had just crossed the border at Morini. The large Shala family left Prizren during the conflict. The relatives who just arrived had to stay outside the camp until shelter was available. The next day, all of the family had tents inside. When the peace agreement was signed, they returned to Prizren to find their homes only mildly damaged.

They came by the thousands. Ragged and weary. Wailing women carrying children with distant stares. The elderly with quivering chins, trying to hold back tears. Some injured. Many terrified. Serbian aggression was unleashed on ethnic Albanians with a vengeance as NATO bombs began to fall that spring. It was called ethnic cleansing.

The flood of humanity into neighboring Albania and Macedonia was massive. Harried aid workers tried to keep up with the flow. Tent camps were set up as refugees waited in limbo for their uncertain future. The camps became small communities with evidence of the tenacity of the human spirit in the strong family bonds that endured the hardships.

With the signing of a peace treaty, NATO arrived in Kosovo to jubilant crowds. As Serb troops pulled out, the liberation of Kosovo was underway. Ignoring warnings of land mines and booby traps, the rejoicing refugees made their way back home. But for many, home was a burned and blackened pile of rubble and mass funerals for loved ones killed. A price dearly paid for freedom.

“Permission will be given at short notice (for) private journeys (to the West).” — Guenter Schabowski, Communist propaganda official

On Nov. 9, 1989, East German leaders made one of the most momentous political decisions in recent memory. The opening of the Berlin Wall marked the end of the Cold War. With the fall of the Berlin Wall came unbridled exultation and the reunification of families and friends long held apart by this hated symbol of communism, division and repression. The first part of the wall removed was at Potsdamer Platz. The crowd bears witness to one of the most important historical events of our time. East Germans poured into West Berlin, many for the first time in their lives tasting freedom.

Two nomadic women carry a baby from their tent in the desert sands of Mali. Desert wanderers, the nomadic Tuareg people of Africa live isolated from society. Their life is one of tradition, spent roaming the Sahara by camel with their meager belongings. They have no television, no toilets, no telephone. Most have never heard of a fax machine, never seen a photograph. It is a life of simplicity spent in the brutal heat of an unforgiving land. A life handed down from generation to generation throughout the centuries. As one young boy said, "The world is where I am."

Some information was obtained from "Nomads by Choice," a three-part Washington Post series by Stephen Buckley.

With the tiny face of an old soul, 4-year-old Memunatu Mansaray bears witness to the atrocities inflicted on society’s most innocent. She throws her one arm up in glee on a ferry ride near the Statue of Liberty during a fundraiser. She testified at a House Subcommittee on Africa hearing on Capitol Hill in Washington, D.C., where the group of amputees from Sierra Leone's civil war gave testimony about their ordeals. People broke down in tears at the sight of such brutality.

Imagine the innocence of a child. Imagine that child trembling in terror as her parents are savagely killed before her eyes, and is then ordered to put her arm on the roots of a cotton tree and watches as it is cut off with a crude machete. Some mercifully faint with the first cut, others bleed to death, and those who survive are haunted for the rest of their lives by the memories. The rebels in Sierra Leone used this particular form of brutality as a means to intimidate the civilian population. The youngest of victims suffered atrocities in a conflict they did not yet even comprehend. They were taken from the harsh life of an amputee camp in Freetown and introduced into another world. Dr. Matthew Mirones, a New York prosthetic manufacturer, read about their plight and was so moved that he decided to start a program to donate artificial limbs to the victims. The first group of eight, which included Damba Koroma and Memunatu Mansaray, arrived in Washington, D.C., in September 2000.

They came in frilly pink dresses and dire expressions. The story of Sierra Leone’s war victims chronicles their physical and psychological rehabilitation, their assimilation into American society and the tenderness that has surrounded and nourished them. The group of eight amputees traveled to the United States by the humanitarian act of a New York doctor with a desire to fit them with limbs and opportunity. They had endured a particular brand of rebel brutality, yet the spirit they maintained in spite of the atrocities profoundly touched their caregivers. Limbs had been amputated, but not vitality. The love that surrounds them transcends both racial and cultural barriers to mend wounds inflicted by man’s inhumanity. These individuals put a face on a tragedy shared by so many in their homeland and highlight the challenges they still face. It is a radiant example of the greater good that can be accomplished by the small acts of a few compassionate hearts that are determined to make a difference — one person at a time.

"The greatness of a nation and its moral progress can be judged by the way its animals are treated."  — Mahatma Gandhi

Faithfully waiting, a dog sits in quiet dignity amid unspeakable tragedy. Katrina’s rampage through Louisiana and Mississippi left in its wake countless lives shattered, thriving communities reduced to ghost towns and precious mementos scattered amid the debris. Family photographs spoke poignantly of the touchstones of life — graduations, weddings and birthday celebrations. Smiling faces hanging on walls covered with mold and fading more with each passing day served as a painful metaphor for the death of a city. In many homes, the display included a tenderly framed image of the beloved family pet.

The tragedy’s most silent of victims were the animals. Thousands of them were abandoned when archaic policy forbade residents to evacuate with their pets. People left food and water, believing they would return in a few days. Some were left behind when helicopters plucked the desperate from rooftops or when buses and boats refused to take companion animals. Or, they were simply left behind. Tied to posts or locked in bathrooms with no hope of survival. Some were shot to death and etched into macabre scenes inside St. Bernard Parish schools meant to provide shelter. Many perished in the floodwaters or died of thirst, hunger or disease. The ones who made it through the storm swam in endless circles in the surreal landscape that was once New Orleans. Some waited patiently on their own destroyed porches for family that never returned.

The largest rescue effort in U.S. history ensued. A realization emerged from the chaos acknowledging the primal depth of the human/animal bond. Folks refused to leave their submerged homes without their helpless friends. Sacrificing pets did not save people.  Volunteers came from across the country. Average folks became heroes — a firefighter from New York who lived through the terrorist attacks on Sept. 11, 2001; a housewife from Minnesota; an antique dealer from Nebraska; a nurse from Baton Rouge. Many left for home only to return again and again, so emotionally moved by the plight of the animals that normal routine seemed insignificant. Power struggles and controversies plagued the various groups, but the common thread was the welfare of the helpless, voiceless creatures that touched their hearts. Many declared this to be the most important thing they will have done.

"It was the most moving and painful experience of my life, and I was changed," volunteer Jessica Higgins said.

First there was the barking. Rescuers broke down doors and smashed windows to save the trapped creatures. As time passed, the barks became weaker. Then there was nothing. It's the "nothing" that made volunteers weep. Things impossible to photograph were the sickly stench and unearthly quiet. No birds, no insects, no sounds. From the silence emerged shadows in the night. They hid under porches covered in toxic sludge and reverted to survival instincts. Rescue workers found the resiliency of the animals a poignant reminder of the profound strength of spirit that transcends adversity. Pets were found alive, locked in homes for more than seven weeks. They still roam the empty neighborhoods, desperately choosing life.

Few dogs were spayed or neutered, resulting in an escalating puppy explosion on the deserted streets. An estimated 90 percent of the rescued dogs have potentially deadly heartworm disease. Few had collars or tags that would have greatly increased the chance of reunification. Only a small percentage had found their people. There weren't merely canine or feline faces filling the shelter crates. Ferrets, snakes, parrots, fish, ducks, pigs, armadillos and even an emu and tarantula made up the menagerie. Tears flowed every day. Tears of sorrow at the pitiful sight of an injured dog’s eyes still filled with trust. Tears of joy streaming down the face of a young boy tenderly reunited with his pooch, Emma. Tears of loss — enough to fill a broken levee.

By almost all accounts, the suffering would have been lessened had authorities included pets in shelter from the storm. For many, leaving without their dearly loved animal companions was as unfathomable as leaving behind their children.

So many lost literally everything — their home, job, friends, community and cherished possessions. For most, all that was left to hold onto was the family pet.

For some, that’s all they needed.