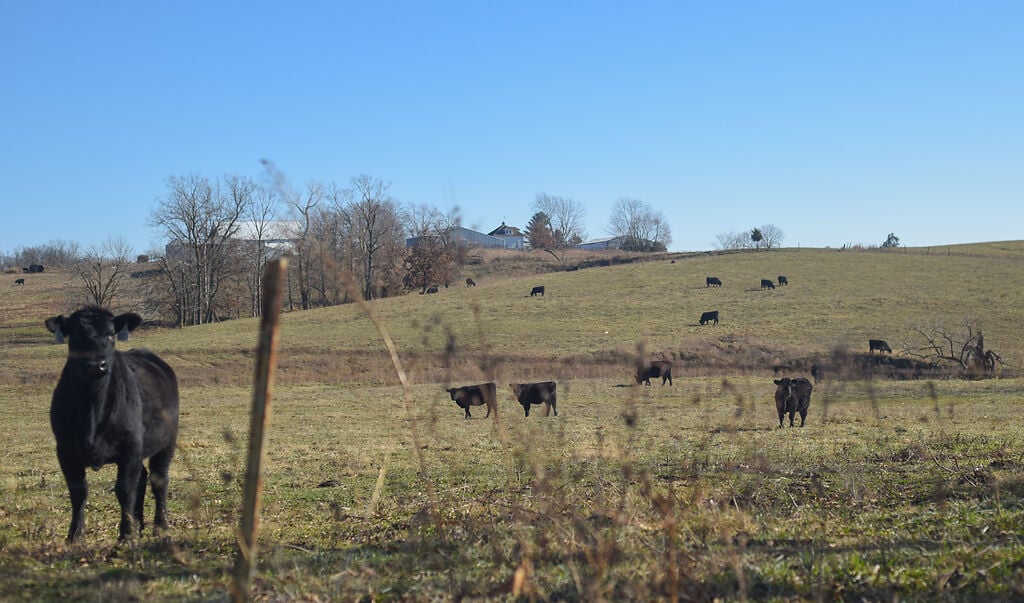 Cows graze on farm land that has been leased out for wind farming last Friday in Howard County. Several landowners in the area have banded together to host wind turbines for a leasing fee. 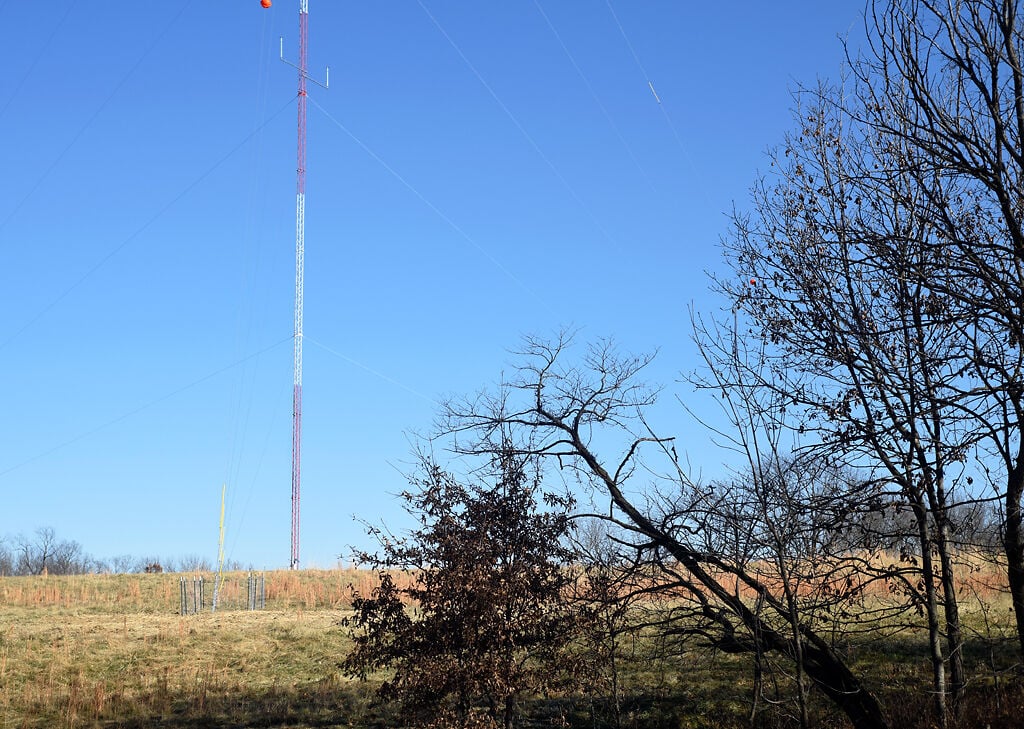 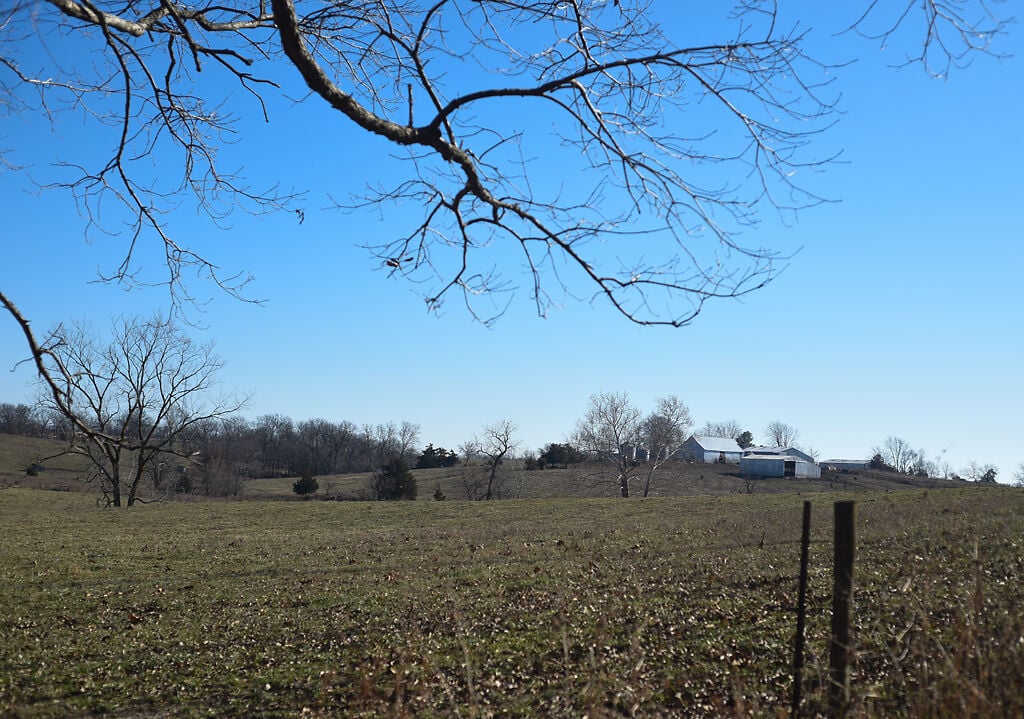 Cows graze on farm land that has been leased out for wind farming last Friday in Howard County. Several landowners in the area have banded together to host wind turbines for a leasing fee.

The drive out of Boone County down Highway 124 is a scenic one.

The winding two-lane highway leads past acres of open fields, dotted with houses and barns so far from the road they look small. Cows graze behind barbed wire fences. Sometimes, you’ll get a glimpse of a horse, a goat or even an alpaca. Trees and telephone poles stretch toward a sky that, on a clear day, seems to go on for miles.

Once you get far enough down Highway 124, something else emerges in the skyline. A tall, candy cane-striped tower overlooks several properties. It’s so thin and so far from the road, it’s hard to see from the highway unless you know what you’re looking for.

That’s a meteorological tower placed by RWE Renewables, a German-based renewable energy company. It’s used to track wind speeds to determine if the area would be a good fit for a wind farm.

In Howard County, 13 landowners have agreed to lease land for this potential wind farm. Altogether, these leases amount to nearly 8,000 acres, a good chunk of which can be seen from Highway 124. With less industry and fewer regulations, Howard County landowners have been willing to sign on to the project in ways many of those in Boone County have not.

Howard County has about 10,000 residents, according to the U.S. Census Bureau. It has one major college, Central Methodist University. Its county seat is Fayette, a city featuring a series of storefronts surrounding a historical courthouse, which doubles as city hall and takes care of all the county’s clerical needs.

Its neighbor Boone County has a population of more than 180,000, several universities and businesses that cluster in Columbia and other cities and towns. 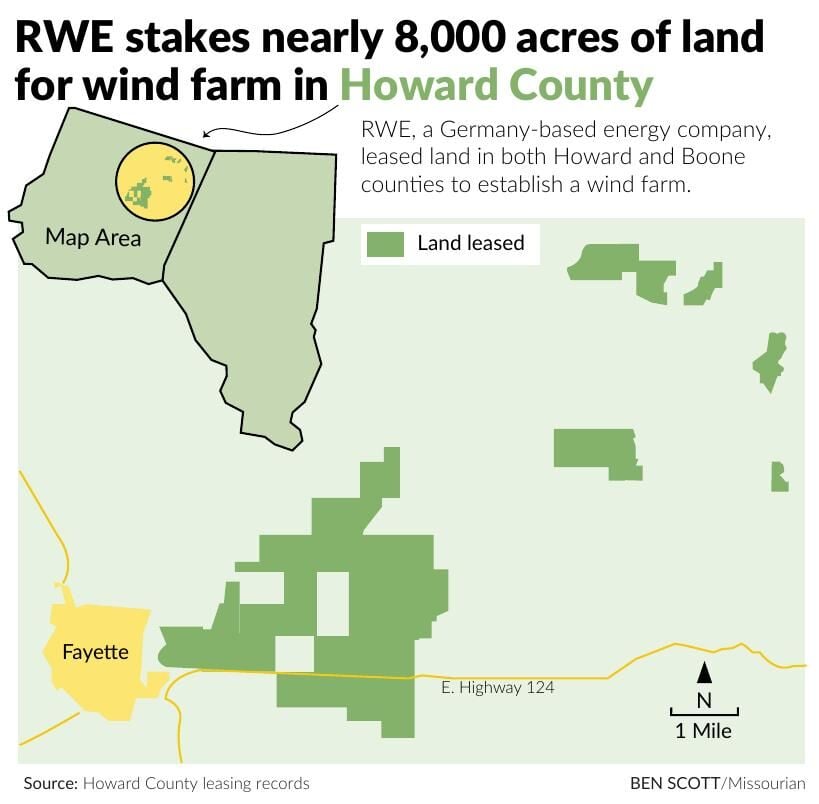 Looking at the two side by side, it makes sense why Howard County landowners have seized the opportunity for a wind farm and nearly doubled the land their Boone County counterparts leased for the same project.

RWE plans to use land in both counties for its wind project, and while some people in Boone County have signed on, the project sparked a debate between those for and against the turbines, with county officials chiming in.

Landowners in Boone County have worried about whether turbines could harm wildlife, become loud and unsightly or create “shadow flickering,” which is when the blades of the turbine create a strobe effect by blocking out the sun, sometimes resulting in nausea or dizziness for residents in close proximity, the Missourian has reported.

Howard County residents share some of those concerns. Presiding Commissioner Jerimiah Johnmeyer said the commission had reservations when first approached about the project.

“I know there are some people against it,” he said. “And we were a little bit concerned in the beginning. I mean, (the company) is not in this area, so we’re very unfamiliar with them.”

On the way to Osage County last year, he drove past a few turbines and decided to see what they were like.

“I mean, we got fairly close to one and it sounded about like an air-conditioning unit in the house, just a little bit of a hum,” he said. “So it wasn’t super noisy like what I might imagine.”

That helped settle his fears. On top of that, he said he thinks RWE is doing a thorough job in environmental studies.

Not everyone in the county is convinced.

“I think it depends a little bit on the type of wind farm you’re going to get,” landowner Kenneth Vroman said.

In Atchison and DeKalb counties, wind projects have been a source of debate. Similar to central Missouri, some landowners were excited about clean energy and extra revenue, while others have experienced ill effects on themselves and wildlife. Weiker visited once on an unrelated trip.

“It was like an orchard up there. I mean, they were one right next to another,” he said.

Back home, he said the company told landowners the turbines will be larger and placed farther apart, hopefully offsetting some of those problems.

However, RWE Communications Manager Matt Tulis said in an email it’s still too early in the process to say what exactly the project will look like.

“Each project is different in terms of wind and topography, and we look to match the turbine type we think will perform best on each particular site,” he said.

Reuben Merideth owns a ranch right next door to Weiker called Merideth Land & Cattle Company. Although Merideth now lives in Arizona, he comes from a long line of area residents. He agreed to lease 706 acres of his land and allowed RWE to build the meteorological tower on a piece of his property.

This wasn’t a decision he or his neighbors went into blind.

“There were several conversations, (which) went back and forth among various landowners in our little vicinity,” Merideth said.

The landowners asked all the big questions: How will a wind farm affect farming? What impact would it have on wildlife? Would it change their livelihoods?

“You know, we had questions and (the company) answered our questions to our satisfaction,” Merideth said.

“I think there’s always skepticism. You know, ‘Who are these people?’” he said. “Neighbors had some questions about just what we were giving up to sign up with this, what we had control over. But at the end of the day, everybody (at that meeting) signed up.”

Boone and Howard counties have varying levels of regulations when it comes to industry.

In Boone County, the Planning and Zoning Commission is working to create specific restrictions for turbines.

Howard County, on the other hand, has no countywide zoning regulations or plans to create any, Johnmeyer said.

“It seemed pretty much like the landowners had enthusiasm for (the project), and I just don’t see where it’s the local government’s job to restrict that,” Johnmeyer said. “I mean, that’s how I personally see it. I don’t think government should restrict landowners from doing what they want.”

Merideth said RWE allowed landowners some control over where turbines would go.

“We said, ‘Well, we don’t want our views blocked. We don’t want to have it next to our house,’” Merideth said. “There was some concern about noise pollution around these things, so we were a little concerned about that, and they allowed us to put some off limits on it. That really satisfied our questions in particular.”

Ron McBee played a big part in organizing some of the landowners, his neighbor Martha Wiegers said.

Although Wiegers leased a comparatively small 180 acres, which likely won’t be enough to build a turbine on her property, she said McBee ensured she would still get paid.

“He wanted me included so that I would at least get something so that when I stare out my window and see those big ugly things, at least I can smile at the check,” Wiegers said.

When asked why he signed, all McBee had to say was that it was for the money.

By the time the project actually gets underway in a few years, Wiegers isn’t expecting it to bother her much. With her and her husband both in their 70s, as Wiegers put it, “We’re ready for the nursing home.”

It shouldn’t bother her family either because she doubts either of her two sons will find themselves settling down in the area.

“They have very happy memories of the farm, but I seriously don’t think that either of them will return to the farm,” she said. “I just don’t know where they’d find a job here. There are no jobs here.”

Fred Weiker, who owns Weiker Angus Ranch, said this lack of jobs could be a reason Howard County’s response was so different from Boone County.

This lack of jobs and other industry probably led landowners to be more willing to sign a lease, Johnmeyer said.

“Farming in general, there’s just not a lot of cash flow in the modern day, and so I think landowners are trying to find alternative ways for revenue,” he said.

The county could get extra revenue as well through property taxes. Johnmeyer said that money could help improve infrastructure or offer more tax revenue to local school districts.

“It’s just endless opportunities, really, to have more revenue,” he said. “We just don’t have a lot of revenue-seeking businesses wanting to come into the county, so an additional revenue source would be greatly appreciated.”

Eventually, that drive down Highway 124 could include big white wind turbines stretching into the sky, their blades turning with the breeze.

“Some of my neighbors don’t want a turbine on their place because they think it’s unsightly,” Vroman said. “Others, it’s not a big deal.”

RWE Renewables says it plans to move ahead. Meanwhile, the county has yet to develop rules for wind farms.