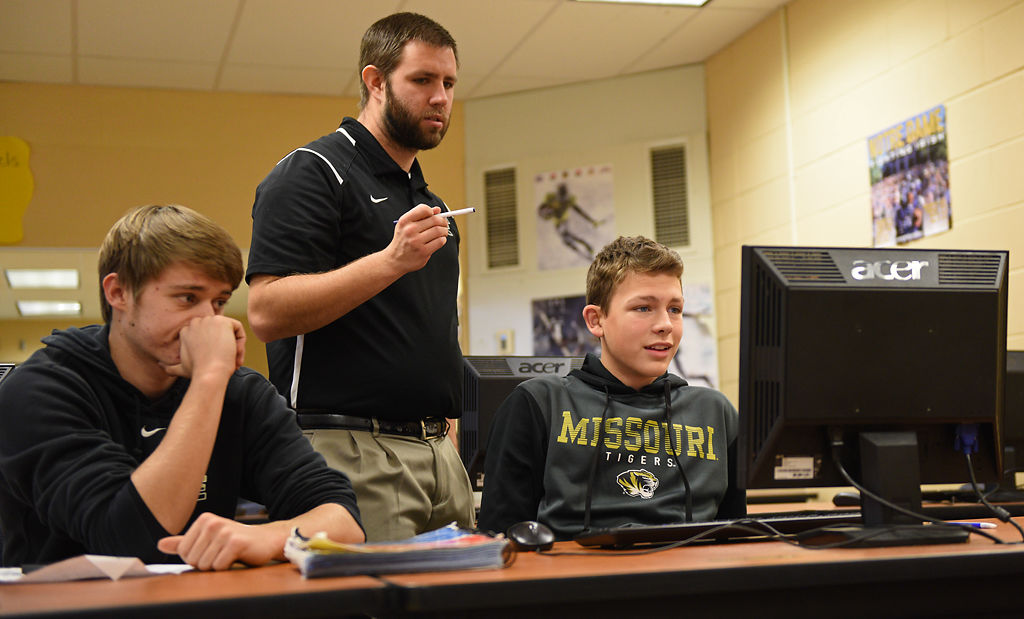 Jack Kindle, left, watches as Kevin Pekkarinen, center, helps Grant Himmelmann with a coding project on Dec. 6 in Fayette. Himmelmann, the statistics keeper for the football team, said that he would like to eventually make an application that would make keeping stats during games easier. 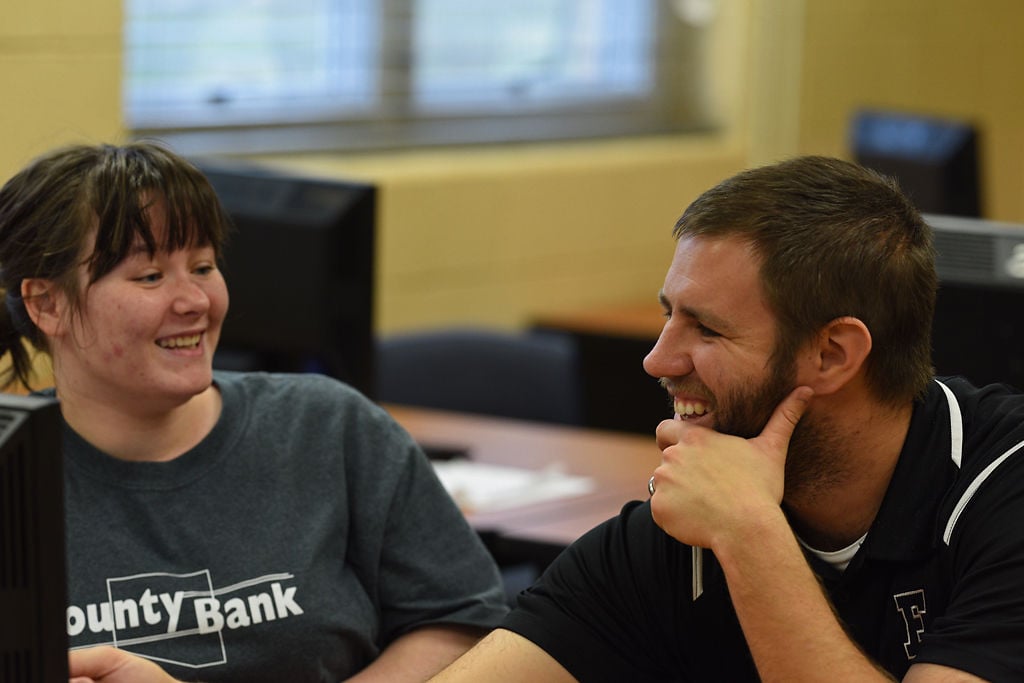 Kaylee Mullins, left, shows off the upside-down Christmas tree she created to her teacher, Kevin Pekkarinen on Dec. 6 during class at Fayette High School. 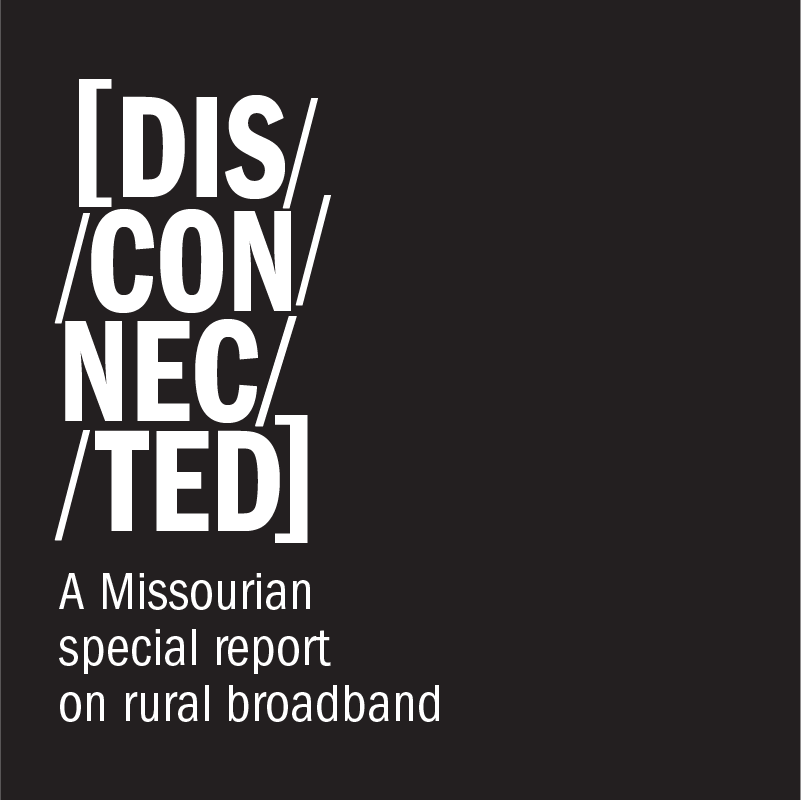 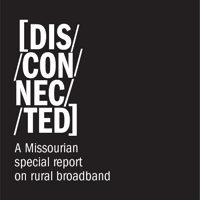 The lack of broadband in rural areas of the state have put Missouri behind and affects residents in many ways. Access the Missourian's full report here.

Jack Kindle, left, watches as Kevin Pekkarinen, center, helps Grant Himmelmann with a coding project on Dec. 6 in Fayette. Himmelmann, the statistics keeper for the football team, said that he would like to eventually make an application that would make keeping stats during games easier.

Kaylee Mullins, left, shows off the upside-down Christmas tree she created to her teacher, Kevin Pekkarinen on Dec. 6 during class at Fayette High School.

FAYETTE — Math teacher Kevin Pekkarinen took on the challenge of starting a computer science course at Fayette High School in the fall of 2017.

Pekkarinen does not have a degree in computer science. He used a professional development program to learn about coding and programming, and how to teach the subjects in the classroom.

He uses a program called CodeHS. It "provided the curriculum, the lesson plans, the quizzes, the problems, you know, everything I use," he said.

"All the kids need is a computer and internet access, and they’re able to ... do everything I ask for them," Pekkarinen said.

According to Jill Wiseman, Fayette School District's director of Curriculum, the district currently has 50 megabits of bandwidth (recently increased from 30). This is enough for the computer science class, which gives students freedom to be creative with technology.

"(Students) use technology in a lot of their classes. Almost every single class, I would assume, by now they have a Google Classroom," Pekkarinen said. Google Classroom is an online application where teachers can post assignments and communicate with students.

Pekkarinen said that his students have been required to get on the internet, log into email and use Google Classroom throughout many of Fayette’s classes during the time he has been teaching there.

Fayette High School’s computer science class has six students. They filed in from a chaotic hallway near the end of an overcast Wednesday in December. They sat in pairs in a computer lab normally used for business classes. On the left sides of their screens they enter code, which contorts and adjusts objects on the right sides of their screens.

Elijah Houston and Josh Williams sat near the front of the class. Williams worked on a maze. The pathways spell out "Josh is rad." Houston’s computer displayed a Magic 8 Ball, which answered typed-in yes-or-no questions with one of six responses.

Question: "Will it rain in Fayette?"

Houston said that he plans on continuing to learn computer science and wants to either learn how to create video games or even build his own computer, which he started trying to do over the summer.

Kaylee Mullins worked on code to create a Christmas tree. She raised and lowered the dimensions for height and width and tried swapping out bits of the code. The tree changed and moved as she narrowed in on the winning strategy.

Grant Himmelmann does statistics for the high school’s football team. His project partner, Jack Kindle, is a quarterback on the varsity team. Himmelmann says that he would like to create an app that makes it easier to record statistics during football games.

Pekkarinen said he shows instructional videos, provides handouts and keeps everyone paced to learn the same concepts at the same times, but for the most part his students work independently. He periodically circulates the classroom to observe and offer advice.

"Just give the kids a chance to be creative and they’ll surprise you," Pekkarinen said.

"The kids I have in my computer science class are all great kids. They’re eager to learn. They’re excited to learn something new."