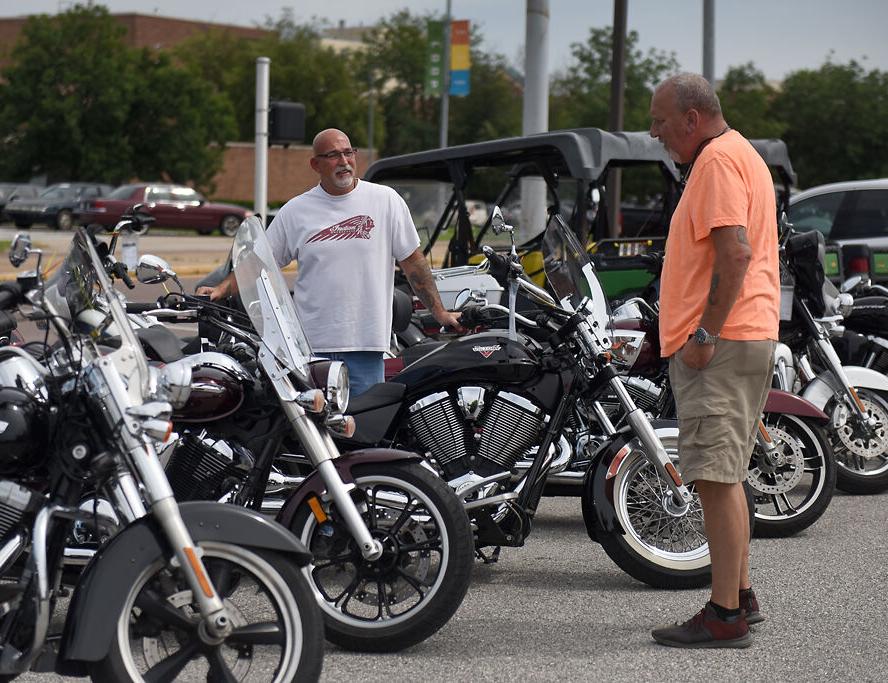 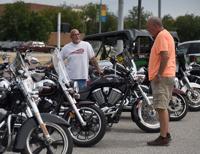 Indian Motorcycle employee Eric Myers, left, talks to Cole Robbins on Wednesday about a motorcycle at Head Motor Company. Robbins returned to look at bikes after a heavy rain ruined his last trip. 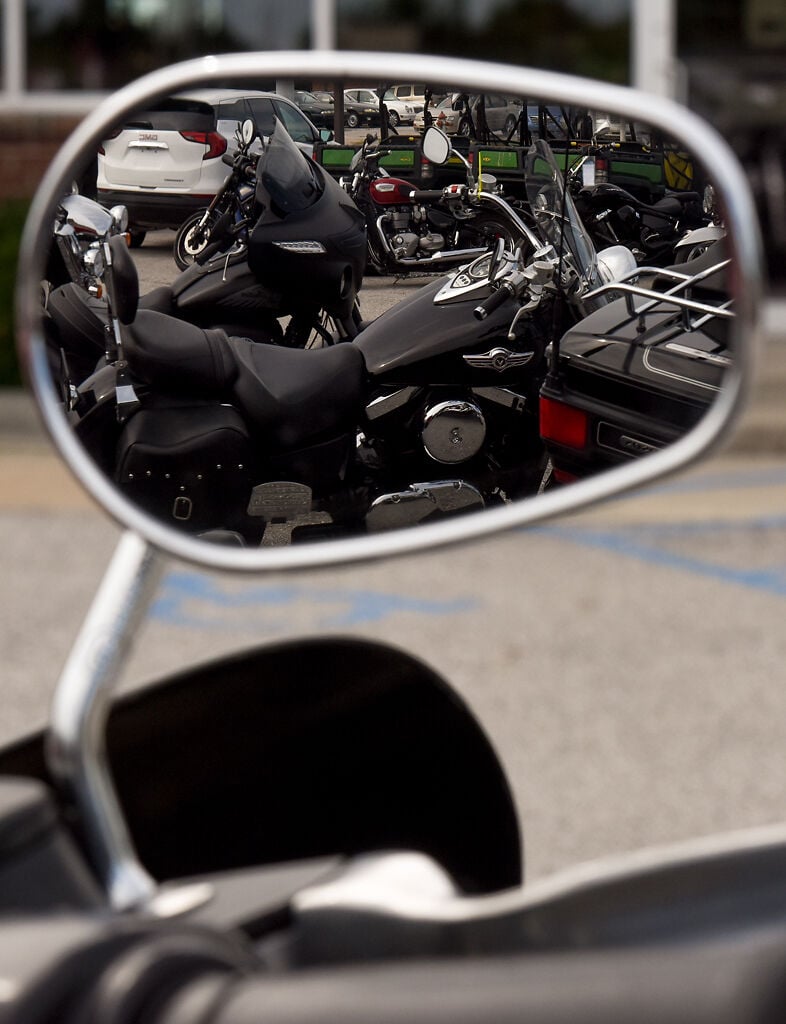 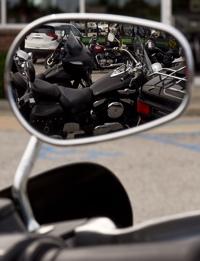 An array of motorcycles are seen in the rearview mirror of a motorcycle Wednesday at Head Motor Company. A recent law passed in Missouri now does not require all motorcyclists to wear helmets. 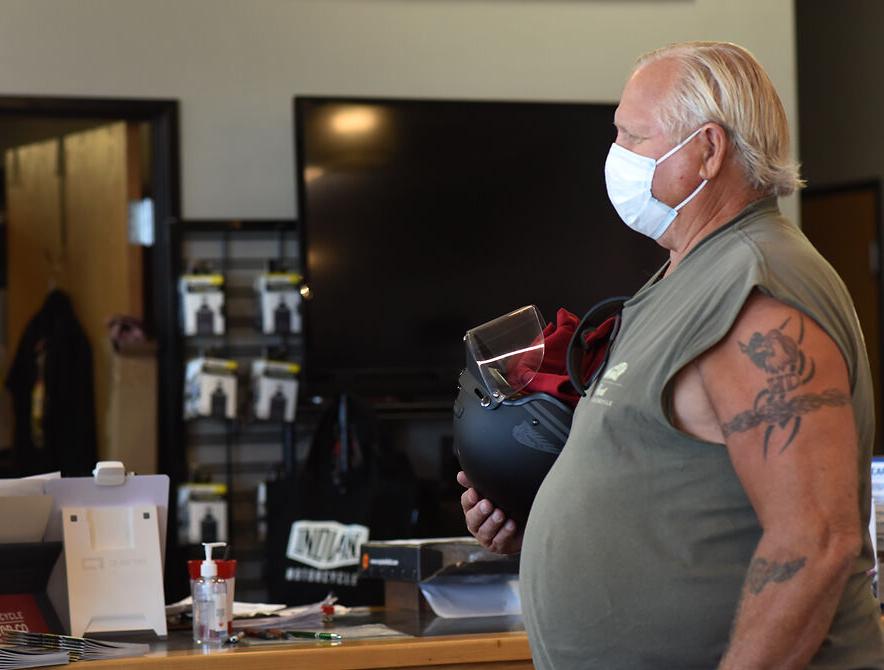 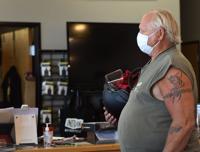 Dick Dye holds his motorcycle helmet Wednesday while waiting for paperwork at Head Motor Company. Dye came in for a new front tire and a recall on his bike. 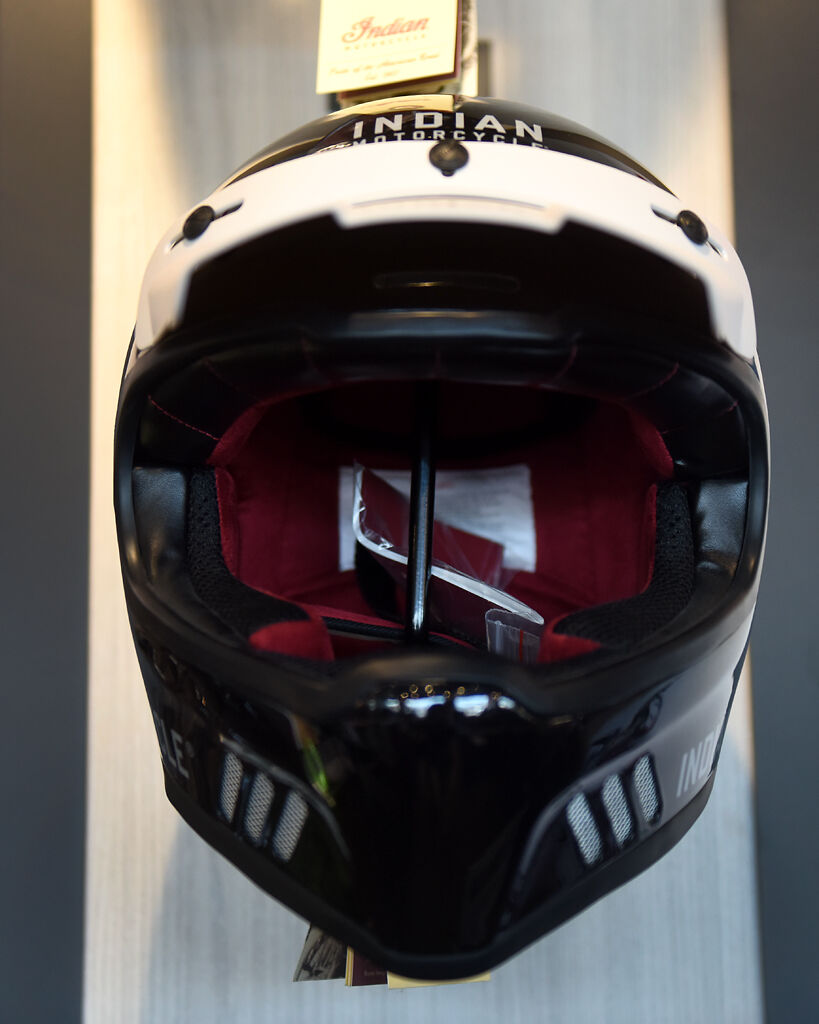 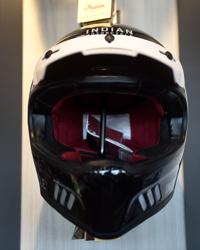 An Indian Motorcycle helmet on display Wednesday at Head Motor Company. A recent law passed in Missouri no longer requires all motorcyclists to wear helmets.

Indian Motorcycle employee Eric Myers, left, talks to Cole Robbins on Wednesday about a motorcycle at Head Motor Company. Robbins returned to look at bikes after a heavy rain ruined his last trip.

An array of motorcycles are seen in the rearview mirror of a motorcycle Wednesday at Head Motor Company. A recent law passed in Missouri now does not require all motorcyclists to wear helmets.

Dick Dye holds his motorcycle helmet Wednesday while waiting for paperwork at Head Motor Company. Dye came in for a new front tire and a recall on his bike.

An Indian Motorcycle helmet on display Wednesday at Head Motor Company. A recent law passed in Missouri no longer requires all motorcyclists to wear helmets.

When Columbia resident Ricky Reeves was killed in a four-vehicle crash on Interstate 70 last Saturday, his death appeared to be the latest statistic in a well-documented line of motorcycle-related deaths in Missouri and around the country.

What set Reeves’ case apart, however, was its status as one of the first instances of a Missouri motorcyclist being killed while legally not wearing a helmet.

“Honestly, I feel like it is the person’s choice,” said Leslie Reeves, his widow. “I know that my husband was killed. I definitely feel like riders should have the ability to make that choice for themselves. ... At least he died doing something that he loved.”

In the case of her late husband, who was struck by multiple vehicles, it’s unlikely that wearing a helmet would have saved his life, Reeves said.

But her view on helmets and choice, which she said her husband shared, nonetheless reflects the complexity of competing values underlying a new state law that went into effect Aug. 28.

Previously, all riders in Missouri were required to wear a helmet. The new law allows them to ride without one, as long as they are 26 or older and have insurance that provides medical benefits for injuries incurred as a result of a motorcycle or motortricycle accident.

It also stipulates that “no person shall be stopped, inspected or detained solely to determine compliance” with that requirement and that “no political subdivision of this state shall impose a protective headgear requirement on the operator or passenger of a motorcycle or motortricycle.”

Similar bills attempting to repeal the law have reached the governor’s desk before: Democratic Gov. Mel Carnahan vetoed a repeal in 1999, and Democratic Gov. Jay Nixon vetoed another in 2009.

After vetoing a broad omnibus bill in 2019 that would have enacted the new helmet law, because of concerns with separate provisions in the bill, Gov. Mike Parson signed a different omnibus package in July containing the new law.

“The research, data and experience show that helmets are proven lifesavers,” said Tara Gill, senior director of advocacy and state legislation for Advocates for Highway and Auto Safety. “Data show that when these laws are weakened, fatalities increase, related costs increase.”

Gill’s organization was active in fighting the law’s passage.

It published op-eds in the state attempting to raise awareness of data showing that motorcycle-related fatalities inevitably increase in states that repeal universal helmet requirements.

After Parson signed the bill in July, Advocates for Highway and Auto Safety issued a statement together with a coalition of Missouri public health advocacy groups.

The statement called the bill’s signing a “deadly decision” in which “common sense was sidelined by the agenda of a vocal minority.”

It also cited data from Michigan, where the percentage of non-helmeted crash fatalities quadrupled after the state weakened its helmet requirement in 2012, and Florida, where fatalities increased by 21% per 10,000 registered motorcycles after the state repealed its universal helmet law.

The Missouri Department of Transportation, in a safety brochure on its website, estimates that the state will see a 38% increase in fatalities as a result of the helmet requirement’s repeal.

MoDOT also estimates an annual economic loss for the state of $9.1 million per motorcycle fatality.

In allowing most riders to not wear a helmet, Missouri joins 31 other states that give some or all riders the right to ride unhelmeted.

Eighteen states and the District of Columbia still require all riders to wear a helmet.

Those who pushed for the law’s passage were consistent in citing the factors that, for them, supersede the strict focus on safety: freedom and choice.

Tony Shepherd, legislative director for A Brotherhood Aimed Towards Education for Missouri, a riders’ rights group, returned to those words repeatedly while advocating for the law.

“We are not outlawing the helmet. We’re giving the people the choice. A helmet is a good safety device — I can’t argue that it’s not,” Shepherd said.

“It rolls down to one word: freedom. We’re just trying to give a piece of freedom to the individual rider.”

Shepherd did not refute the data showing a link between relaxed helmet laws and fatalities, and he acknowledged increased deaths — in relation to what he predicted would be an increase in riders — as a potential cost of the new law.

He, along with ABATE for Missouri, recommends wearing a helmet.

But he maintained that the decision to wear one should be left to the individual and not the government. He also said when riders do away with the helmet, they’re more inclined to practice caution.

Rep. Shane Roden, R-Cedar Hill, who sponsored the original version of the law in the House, echoed Shepherd’s argument.

“One of the things I kept hearing from constituents in my district was that they wanted the choice,” Roden said. “As a motorcycle rider, I appreciated that choice.”

Roden said part of the impetus for the law had to do with economics and practicality, citing Missourians who in the past have chosen to ride in Illinois or Iowa, where there are no helmet requirements, and take their helmets off as soon as they cross the state line.

Those riders, Roden said, spend money on fuel taxes and other goods and services that would otherwise be spent in Missouri.

But Roden, who also wears a helmet, said the broader issue at stake is the government’s role in regulating people’s safety.

“Where do we start drawing the line on what government is responsible for doing?” he asked. “There’s no good reason to jump out of a plane, but parachuters do it all the time.”

“Someone who wants to regulate what you want to do in your life, they’re part of the problem. Live your life, let other people live their life and mind your own business.”

For Gill, the issue is more complex.

“It is a privilege to drive on public roads, and the repercussions of their choice is not limited to the individual,” she said. “When you sustain these injuries, it doesn’t just affect the individual, it’s family, friends, it’s all taxpayers in the state who have to cover medical care and other associated costs.”

It remains to be seen what those costs will ultimately be for the state. But for many Missouri legislators and riders, it’s a cost worth paying.

Though grieving, that’s also the view of Leslie Reeves in the wake of her husband’s death. “He will forever have his knees in the breeze, and that’s something I’ll just have to accept.”