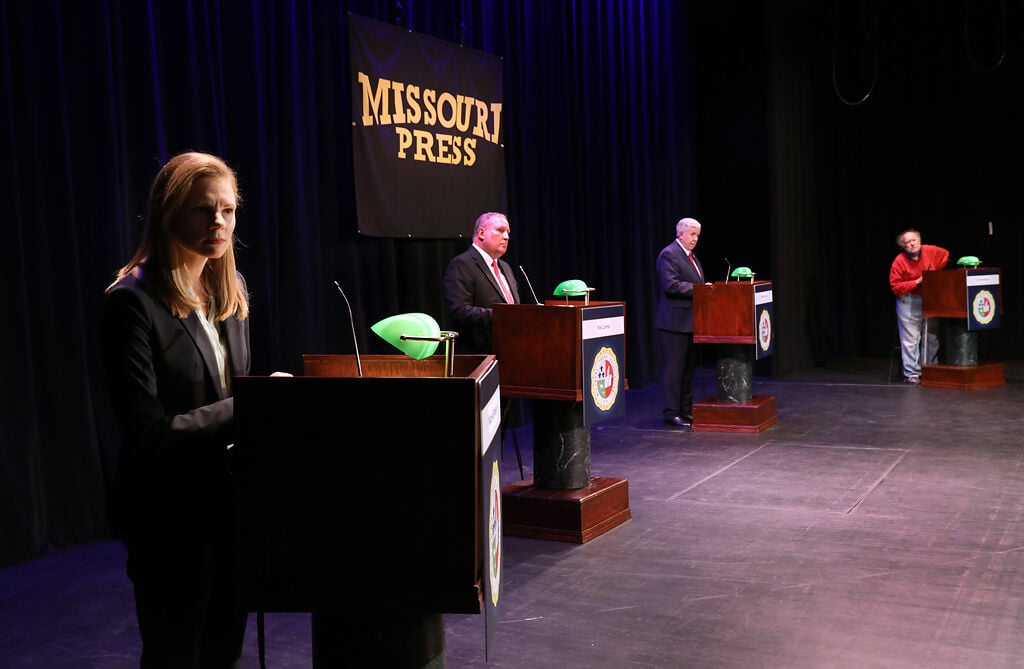 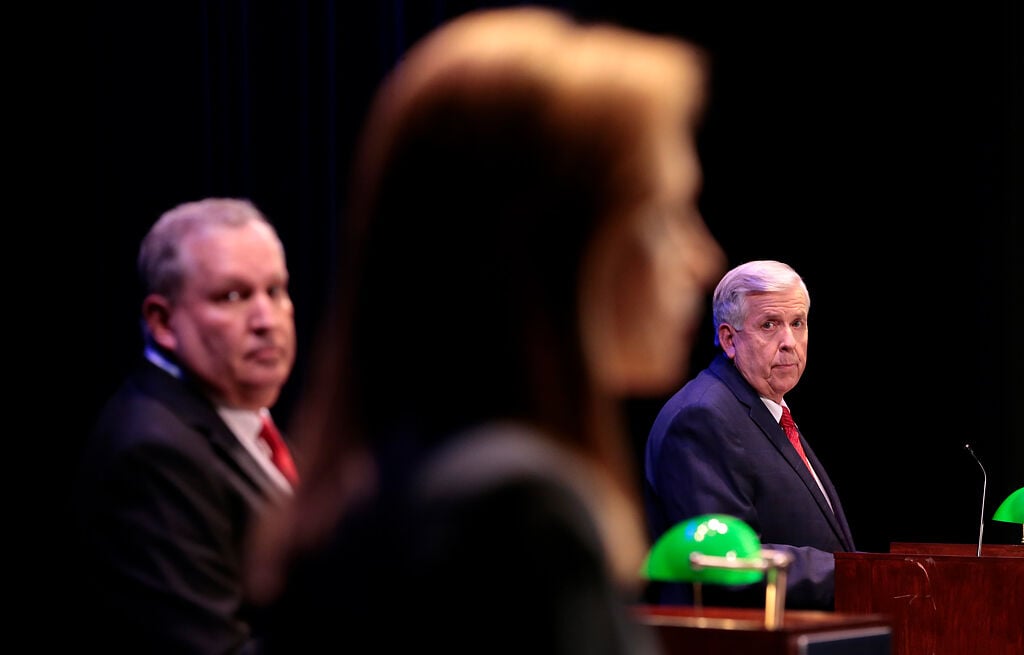 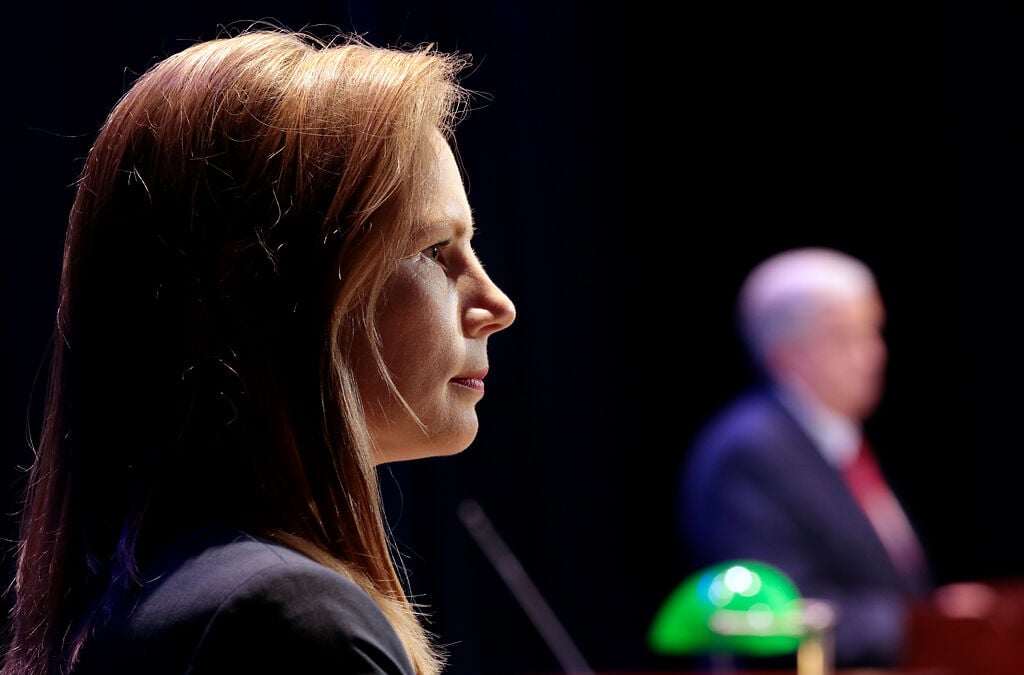 State Auditor Nicole Galloway listens to a question during the Missouri gubernatorial debate Friday at the Missouri Theatre. 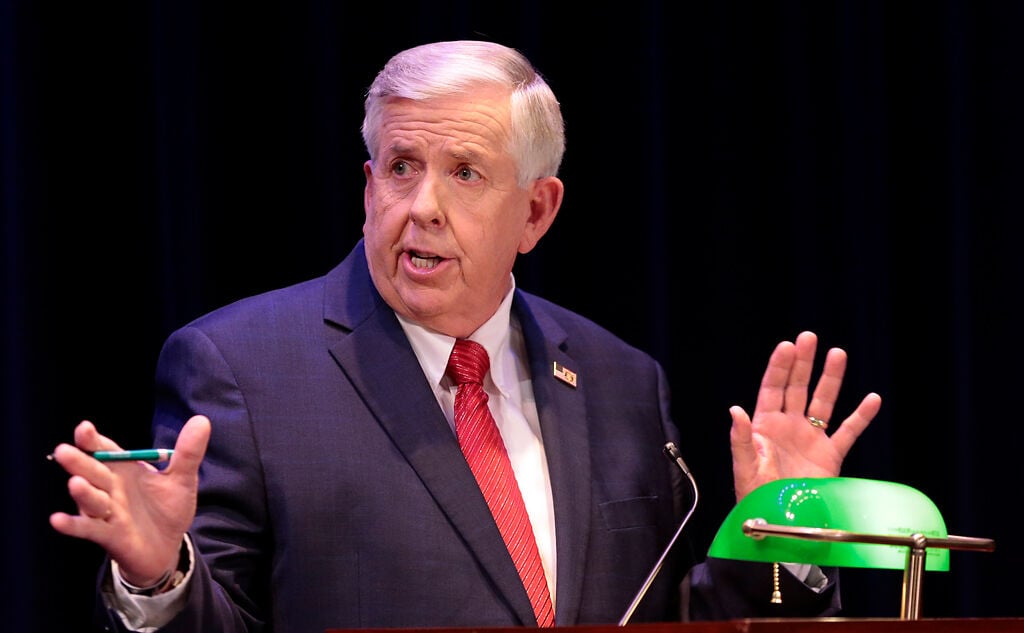 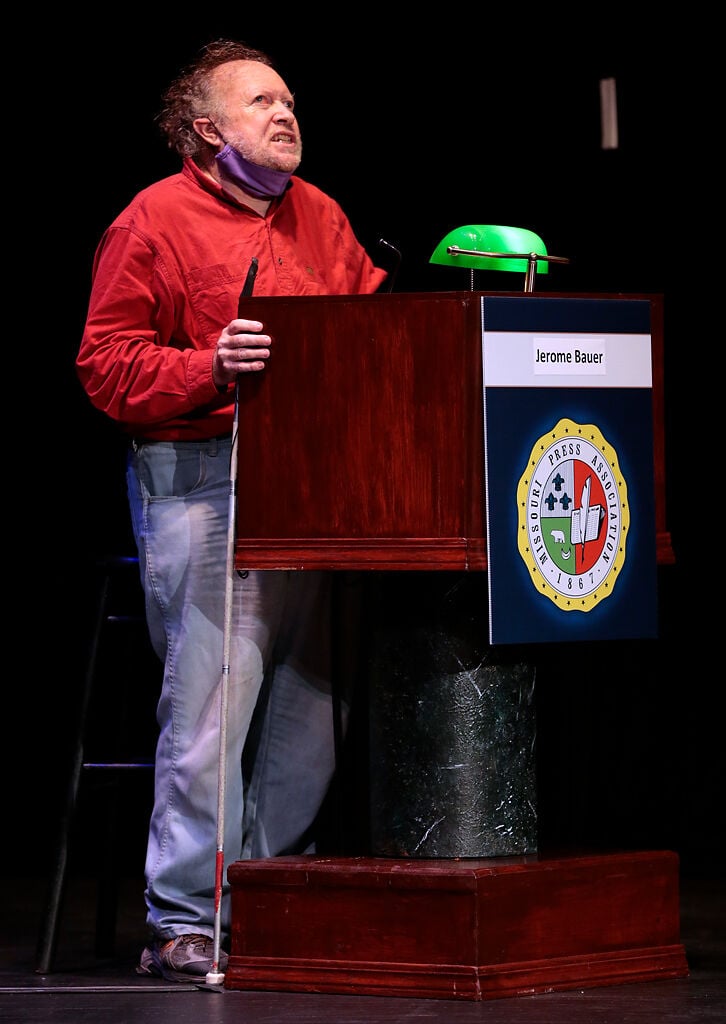 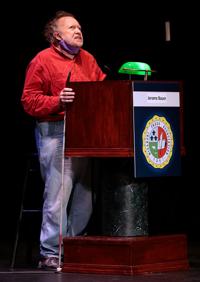 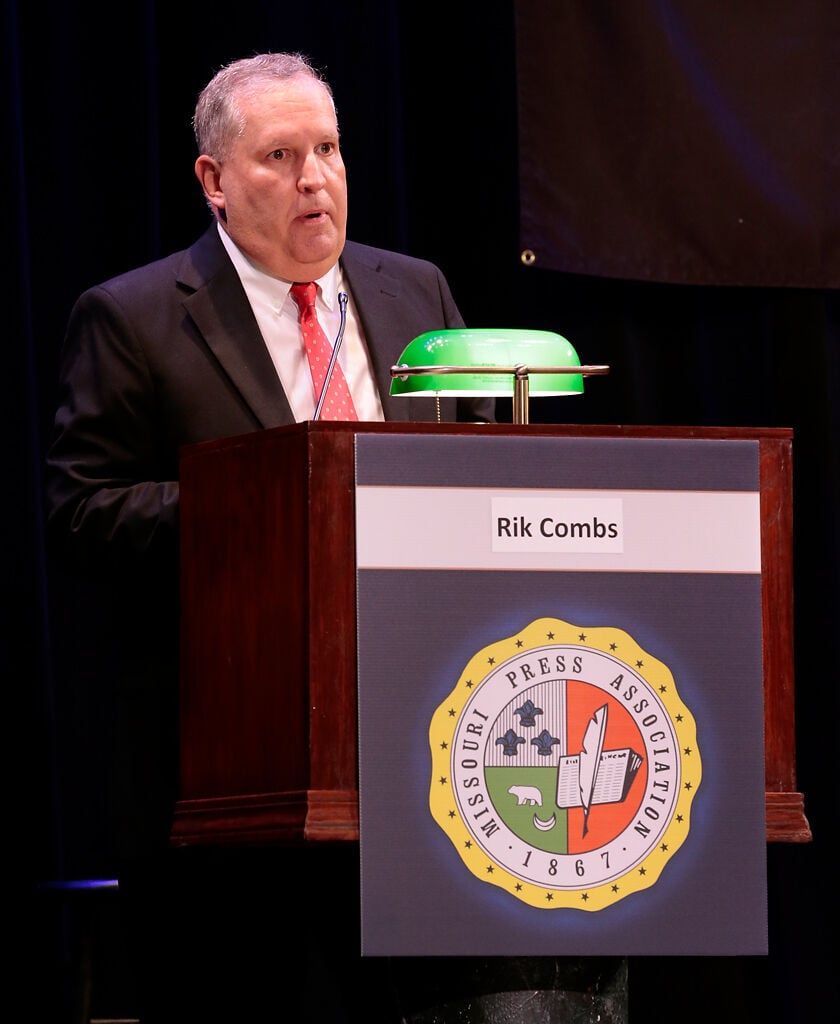 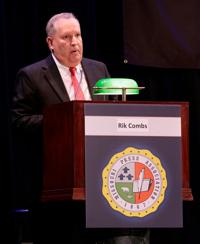 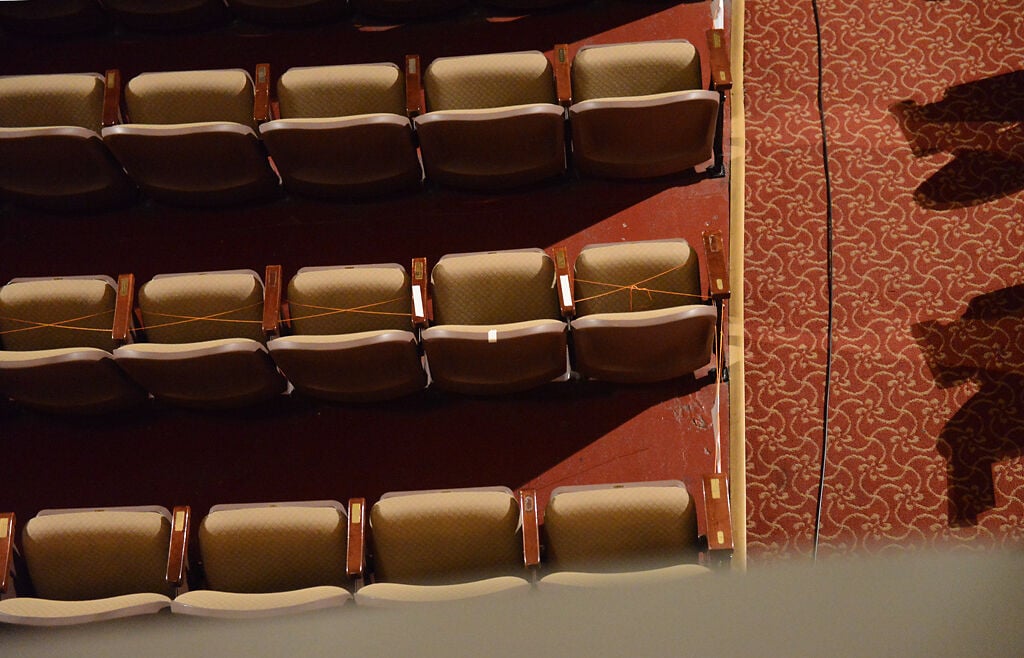 Audience seats are taped off for the Gubernatorial Debate on Friday at the Missouri Theatre. The debate lasted an hour.

State Auditor Nicole Galloway listens to a question during the Missouri gubernatorial debate Friday at the Missouri Theatre.

Audience seats are taped off for the Gubernatorial Debate on Friday at the Missouri Theatre. The debate lasted an hour.

In what was a critical examination of the state’s COVID-19 response, candidates in the race for Missouri governor gathered for the first — and likely only — time for a debate Friday at the Missouri Theatre.

All four candidates — Gov. Mike Parson, a Republican; State Auditor Nicole Galloway, a Democrat; Libertarian nominee Rik Combs; and Green Party nominee Jerome Bauer — shared a stage to affirm their visions of the role of state government. The forum was held at the Missouri Theatre and televised live on KOMU 8 — co-sponsored by the University of Missouri School of Journalism and the Missouri Press Association.

Galloway described Missouri’s federal "Red Zone" status as evidence for a “complete reset” of the state’s COVID-19 response. She emphasized “science-backed, data-driven approaches” to mitigate the spread like a statewide mask mandate, which the governor has rejected since March.

She then described Parson’s plan as “crumbling,” citing Friday’s news that Missouri reported a daily death count of 136.

“When Gov. Parson was asked if he took responsibility for his government's response to this virus, he said no and compared it to car crashes,” she said. “This has been a failed test of leadership.”

Parson rejected Galloway’s comments and continued to characterize his administration’s response as a balanced approach, a partnership between the state and local authorities.

“We've actually reached out to Washington University, MU, the Missouri Hospital Association — the experts in Missouri,” he said, “and put a plan together — the Show Me Strong Recovery plan — with PPE, with testing. And we went from 2,000 tests a week to over 125,000.”

He also added testing would “be available at every school in a couple of weeks.”

Galloway criticized what she said was Parson's inconsistency on masks. "During the week he encourages folks to wear masks, but when he goes to campaign rallies on the weekends he tells folks 'Don't wear a dang mask if you don't want to.'"

Meanwhile, Combs scorned government shutdowns and stay-home-orders, adding that Missouri should have instead looked toward Sweden’s laissez-faire approach and herd immunity.

“I think what we can do is open the state up fully,” Combs said. “I believe that our community would take control and attenuation would help.”

Bauer said the government has a duty to keep the public informed at all times and should be fully flexible and responsive to new facts.

“The politicians shouldn’t be the ones at the podium when we’re talking about public health issues,” Bauer said, “because in any given room, half the people didn't vote for the politician.”

Another key segment of the debate hinged on issues of racial justice. There have been large protests across Missouri, and the nation, in response to the police killings of George Floyd, Breonna Taylor and several others.

Galloway accused Parson’s campaign of using racial division and stereotypes to attack her and her supporters. Parson said his campaign has never run a negative advertisement against Galloway or her supporters.

The conversation then shifted into issues of rising violent crime, especially in metropolitan areas.

Parson touted achievements from the legislature’s special session on crime, especially changes to the state witness protection program. However, Galloway pointed out concerns over funding for that program and said the session was largely a failure — with only two out of five bills passing into law.

Parson then accused Galloway of seeking to defund the police, citing her support of Massachusetts Sen. Elizabeth Warren’s presidential campaign and Cori Bush, the Democratic candidate for the U.S. House of Representatives in St. Louis City who defeated longtime incumbent Lacy Clay in the August primary. Though Galloway has not called for defunding of police, Warren and Bush at times have.

Galloway responded that she does not support defunding the police, but rather supports increasing funding for social work and other programs that can help take the police out of situations they are not well equipped for.

“There is only one person on this stage who has actually defunded the police, and that is Gov. Parson when he cut $1.8 million from our state police force earlier this summer,” Galloway said.

Parson said he did not know what Galloway was referring to, but state budget restrictions from July show that $1.8 million was cut from the budgets of the state highway patrol and capitol police.

After the debate, Parson's campaign responded that restrictions are not "cuts."

"The administration asked every department to identify any expenditures they could pause as state government tightened its belt during the COVID-19 response and these were the items the department specifically identified," according to the campaign.

"That means providing a good education for children in K-12 and higher education," she added.

"It's so unfortunate that the governor had to cut $100 million dollars from our higher education budgets this year after it was restored by the legislature," she said, adding that "$230 million was cut from our K-12 education."

Parson said the actual cut was smaller, and was done "because everybody in Missouri had to tighten their belts with what we were doing through with a pandemic," he responded. "Government doesn't get a free pass on that, and we were up front with how they were going to implement that."

Bauer is in favor of the Medicaid expansion requirement passed by voters in August, and said he is on Medicaid currently. He received an adverse action notice two years ago and nearly lost his access to the program.

“I managed to get it straightened out at the last possible minute, but not everybody is so lucky,” Bauer said. “Health care is a human right.”

Galloway said she plans to save money for the state of Missouri through Medicaid expansion.

“I know it can be implemented in a fiscally responsible way without raising taxes or cutting other accounts,” Galloway said.

She cited independent studies, stating that “Medicaid expansion in Missouri is budget-neutral and in the long run saves our state billions of dollars.”

On the other hand, Parson said implementing Medicaid expansion will be a major expense for the state.

“Anytime there’s an expansion in state government, it is never free,” Parson said.

He was unclear about how much Medicaid will cost, but estimated about $200 million per year.

Combs agrees, but does not want to increase taxes for citizens.

“When you start looking at the money that it’s going to cost the state of Missouri, that’s got to come out of somewhere,” Combs said. “No new taxes would be my pledge on that.”

After the debate, Bauer reminded voters that the Green Party regained its ballot status in Missouri four years ago. He also asked Missourians not to settle for Galloway or Parson if they don’t feel confident about their proposals, and instead vote for third parties, even if they are unlikely to win, as growing support could help a third party "become a major party."

"I never view any vote as wasted, because a vote's a special thing, and you don't owe your vote to any person or any party," he said. "If we just have a two-party system, that's very bad for the country."