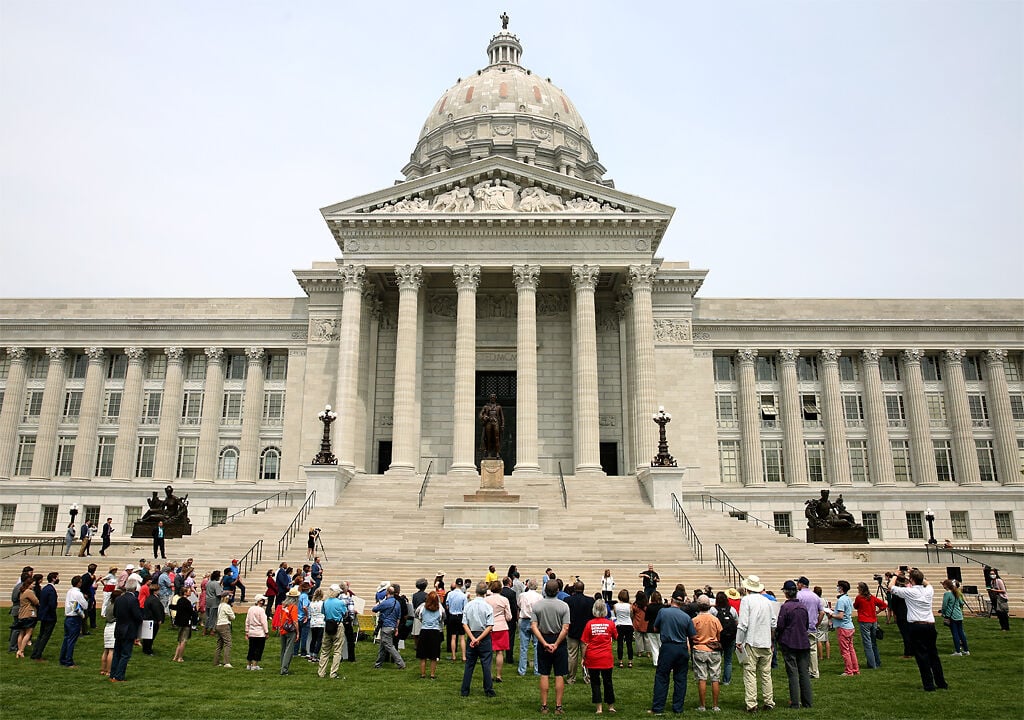 Around 100 people attended the Rally to Save Missouri Healthcare on Tuesday outside the Capitol in Jefferson City. Missourians approved Medicaid expansion in August, and Gov. Mike Parson had a line for it in his proposed budget. The current budget, still being debated in the Senate, does not include funding for Medicaid expansion. 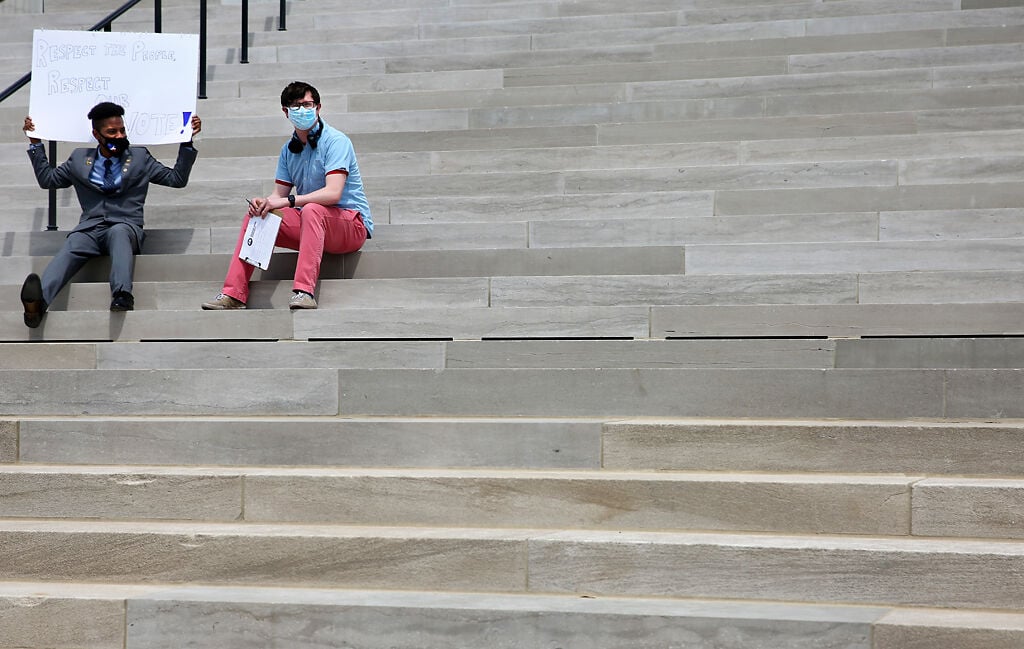 Rep. Rasheen Aldridge, D-St. Louis, and Alex Johnson await the start of the Rally to Save Missouri Healthcare on Tuesday outside the Capitol in Jefferson City. “Missouri voters voted on this. It’s a done deal,” Johnson said. “Now it’s about whether lawmakers will do what the Constitution requires of them.” 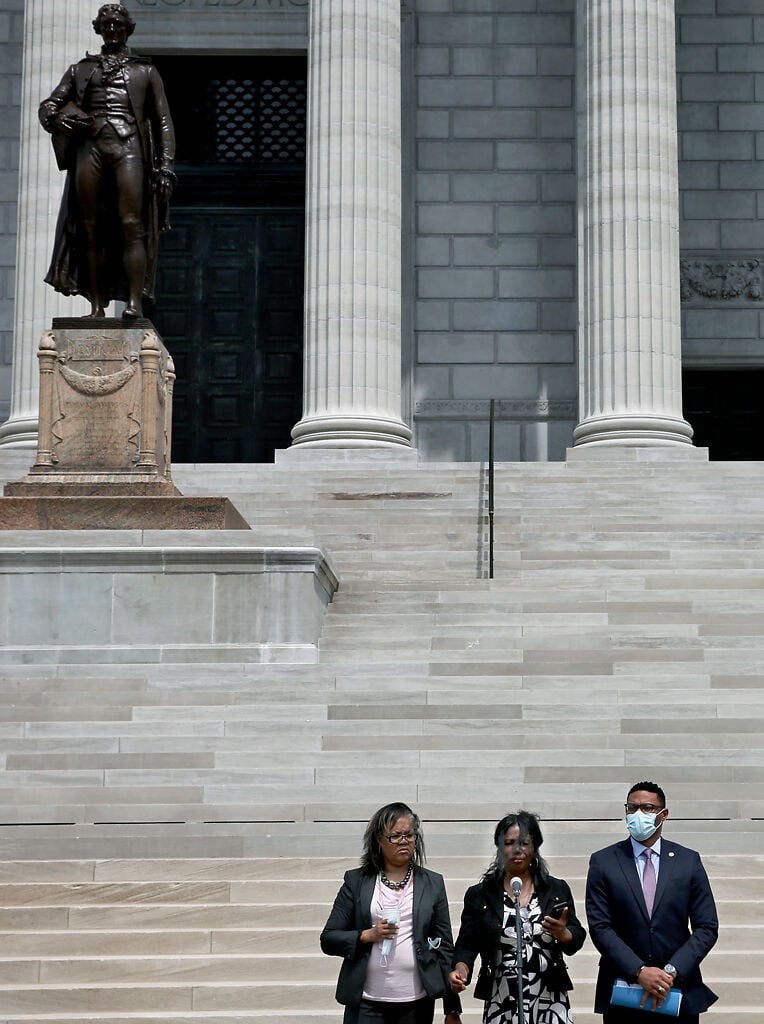 From left, Sen. Barbara Anne Washington, D-Kansas City; Sen. Karla May, D-St. Louis; and Sen. Brian Williams, D-University City, speak during the Rally to Save Missouri Healthcare on Tuesday outside the Capitol in Jefferson City. The trio represents three of the four Democrats on the 14-person Senate Appropriations Committee, which handles the state’s budget. 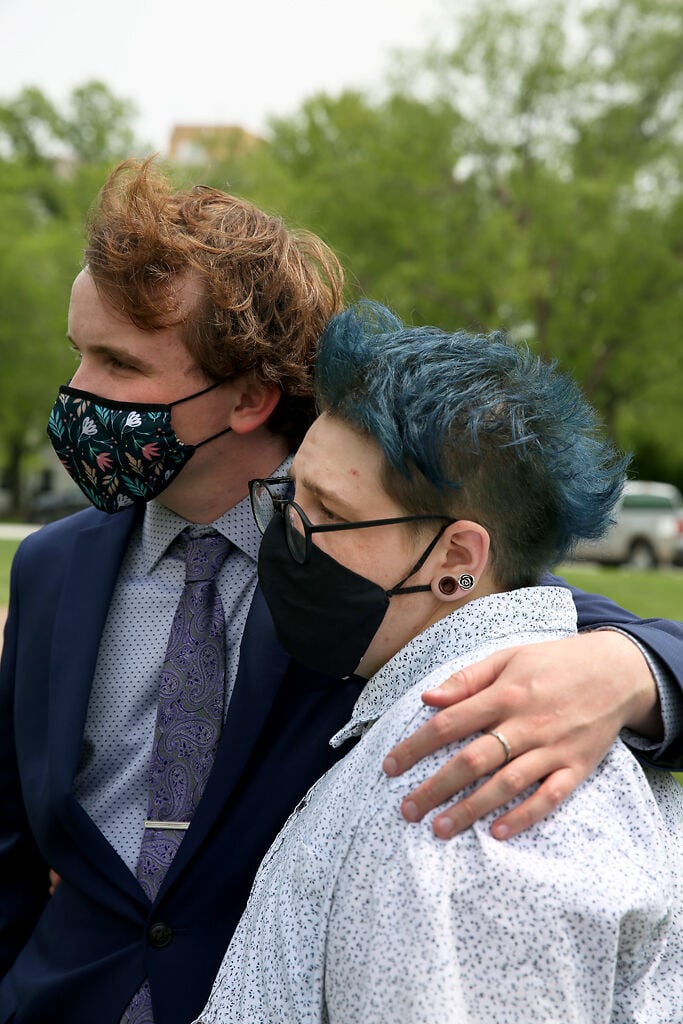 ABOVE: Andrew Bennett, left, puts an arm around Avery Schuck on Tuesday during the Rally to Save Missouri Healthcare outside the Capitol in Jefferson City. Both raised their hands when a speaker asked the crowd if anyone had ever not received medical attention due to an inability to pay for it. LEFT: Around 100 people attended the Rally to Save Missouri Healthcare on Tuesday outside the Capitol in Jefferson City. Missourians approved Medicaid expansion in August, and Gov. Mike Parson had a line for it in his proposed budget. The current budget, still being debated in the Senate, does not include funding for Medicaid expansion. 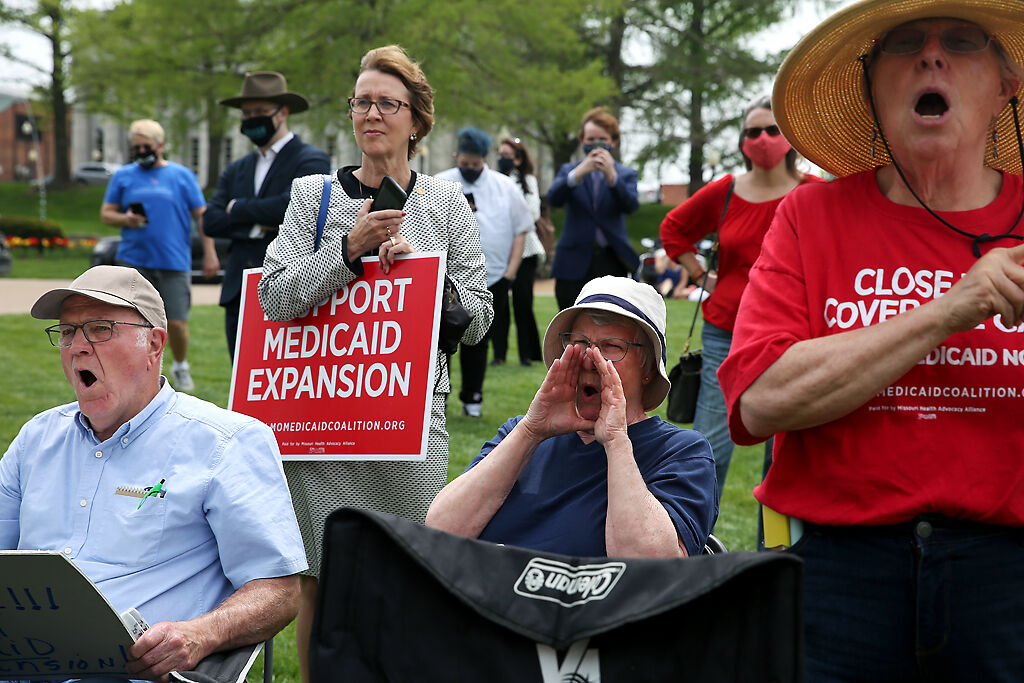 From left, Ken Horgan, Maxine Horgan and Barbara Nyden yell “Boo!” after a lawmaker noted Missouri’s low ranking in health care compared to the rest of the U.S. Missouri currently ranks 42nd in health care, according to U.S. News & World Report. “Health care is a right for the people,” Nyden said when asked why she attended the rally. “Health care is an obligation for the society.”

JEFFERSON CITY — Approximately 100 Missourians in support of full funding of Medicaid expansion rallied outside the Capitol on Tuesday, just a day before state lawmakers are expected to take action on the issue.

Missouri House Democrats organized the event to emphasize what they call “the will of the people.” Medicaid expansion was approved by Missouri voters in the 2020 August primary elections. That initiative amended the Missouri constitution to include Medicaid expansion, but did not explicitly require the legislature to fund it.

Republican lawmakers have blocked efforts to fully or partially fund expansion, potentially leaving millions of federal dollars on the table.

Among those who spoke at the rally was Melinda Hillie, who said her experience finding adequate health care in Missouri has been a “nightmare.”

Hillie said she has Type 2 diabetes, along with a host of other illnesses that have resulted from lack of access to quality health care after losing insurance due to a career change. At $200 per vial of insulin and a recommendation of several injections per day, Hillie said affording treatments has been a struggle.

“I just don’t want anybody else to have to go through the hell that I went through these past seven years,” said Hillie. “ ...You know, every day I have to fight to stay alive, and all I wanted was health care. All I wanted was insurance, and I wasn’t given that option.”

Because the 2020 ballot initiative amended the Missouri Constitution, the Department of Health and Human Services is required to move ahead with the expanded program, whether or not the legislature allocates funds.

Gov. Mike Parson, who opposed expansion, has said he would respect the constitutional amendment. He proposed full funding for state expansion, but House Republicans cut out that funding in late March.

Now, the funding plan is in the hands of the Senate, where it will be debated this week. The legislature has until May 7 to send its final funding proposal for Medicaid to Parson, along with all other state budget bills.

Whether lawmakers provide half of the funding needed to expand Medicaid or no funding at all, the final decision will likely be made in court.

“This fight is going to go all the way to the Supreme Court of Missouri if we need it to,” said Rep. Barbara Phifer, D-St. Louis.

At the rally, doctors, faith leaders and Democratic lawmakers framed the funding of Medicaid expansion as a moral imperative.

“Republicans on these committees have made it their habit of pitting the poor, the sick, minorities and women against each other by limiting state resources,” Rep. Ashley Bland Manlove, D-Kansas City, said. “And today is the most egregious example of that in years.”

They also sought to poke holes in the Republican argument that the expansion would cost the state too much money, citing the federal government’s agreement to provide a 90% match for the program and additional funding available from federal COVID-19 relief leading to record state surpluses.