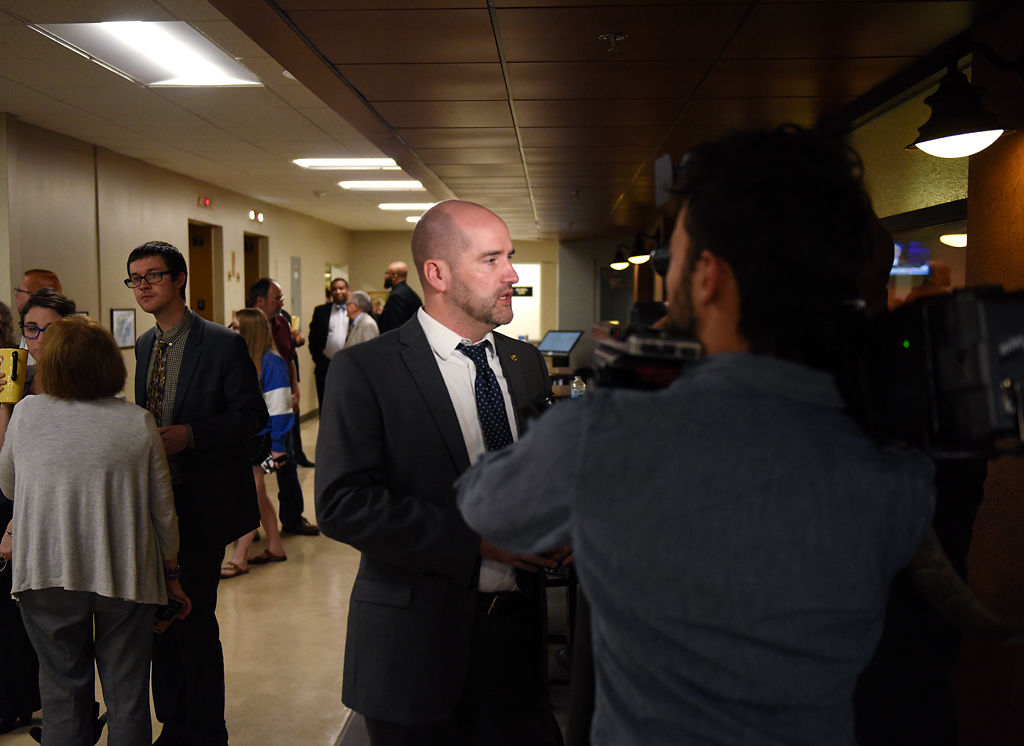 Rep. Greg Razer, D-Kansas City, speaks with journalists after the review of a report done by a House special committee Wednesday in Jefferson City. Gov. Eric Greitens criticized the report before its release, calling it a “political witch hunt” in his statement to the press. 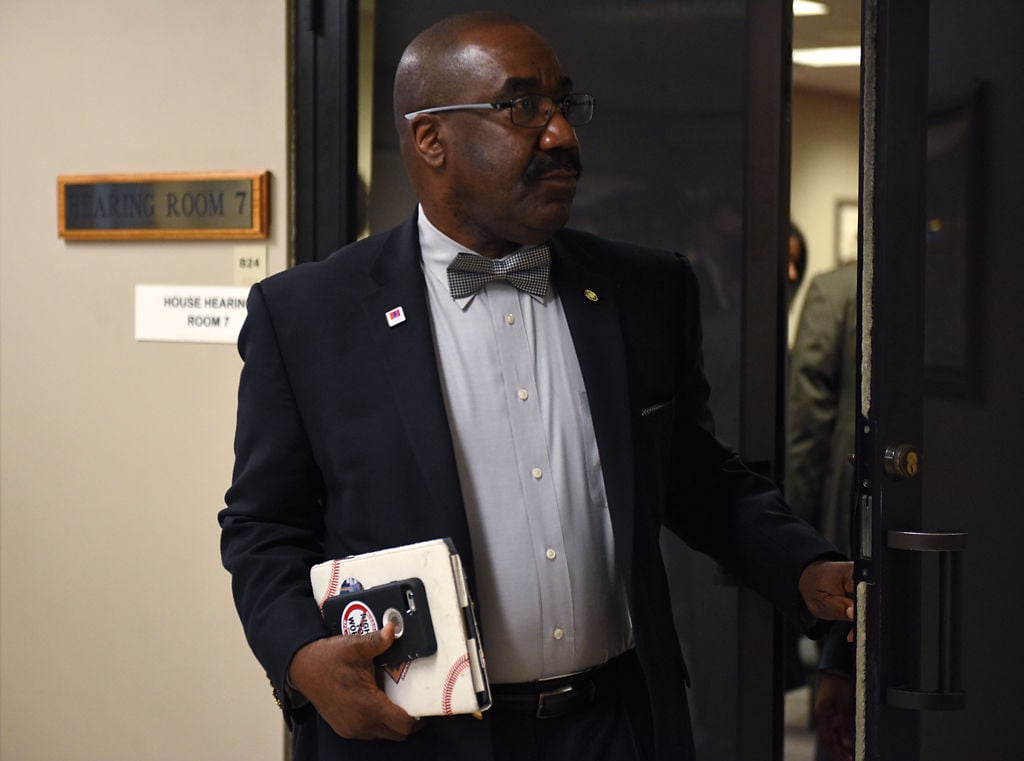 Rep. Jerome Barnes, D-Raytown, exits a hearing room at the end of a caucus held by a special committee reviewing the content of the investigative report into Gov. Eric Greitens’ indictment on a felony invasion of privacy charge Wednesday in Jefferson City.

Rep. Greg Razer, D-Kansas City, speaks with journalists after the review of a report done by a House special committee Wednesday in Jefferson City. Gov. Eric Greitens criticized the report before its release, calling it a “political witch hunt” in his statement to the press.

Rep. Jerome Barnes, D-Raytown, exits a hearing room at the end of a caucus held by a special committee reviewing the content of the investigative report into Gov. Eric Greitens’ indictment on a felony invasion of privacy charge Wednesday in Jefferson City.

JEFFERSON CITY — As an intense and hectic day wound down at the Capitol, it was hard to keep track of how many lawmakers called for Gov. Eric Greitens to resign.

The sentiment was shared by many Republicans and Democrats after a special House committee released a highly anticipated report detailing the governor’s affair with his hairdresser.

The report includes interviews from the woman and other witnesses with detailed encounters between her and Greitens; she alleges the encounters were at times violent and not consensual.

House Democrats and Republicans met separately in caucus Wednesday afternoon — Democrats behind blacked out, closed doors in the Capitol basement and Republicans off-site at the Missouri Farm Bureau — to review the report.

A few female Democratic lawmakers were seen leaving the room, quickly making their way to the restrooms with their heads hung low, on the brink of tears.

When the Democrats disbanded, many of the lawmakers agreed that they think the governor should resign.

Rep. Greg Razer, D-Kansas City, reiterated a statement he's made in the past.

"I think that when the people of Missouri see this report, though, that there’s really no question left," Razer said. "This man does not need to be in the governor’s mansion, signing these bills, so I hope he resigns and puts the state out of this trouble."

Rep. Karla May, D-St. Louis, said the government has been operating under a "cloud of misconduct."

“One thing I do agree with is that everyone needs their day in court,” May said. But she added, “I think that Missourians also deserve something different from their governor.”

Rep. Joe Runions, D-Grandview, said it was clear to him what the governor should do.

“My heart goes out to his wife and kids for having to endure all this turmoil. He needs to resign, bottom line,” Runions said.

“The time has come for the governor to make a decision, or the legislature will be forced to make one in the best interest of the state and its citizens,” Rep. Nate Walker, R-Kirksville, said. Walker has previously said Greitens should resign.

After the report's release, Congresswoman Hartzler echoed the sentiments of other Republicans, saying the following in a statement:

“The report issued today concerning Governor Greitens and his behavior surpasses disturbing. It is disgusting," Hartzler said. "This is not behavior befit for a leader in Missouri or anywhere else for that matter."

When asked about some of the explicit information in the report, Rep. Bob Burns, D-St. Louis, said: "A man doesn't do that. A man serves his family, serves his country, serves his state, works hard for his family, praises God. This man clearly is nothing about that, but I pity his mom, his dad, his children and his wife because his children some day are going to have to live through this and know what he did.”

“I felt like if I wanted to experience that kind of stuff… I would go to a pornography theater. I’d heard enough, and if that was one of my daughters or one of my relatives that I felt was credible, 'extremely angry' would be an understatement,” Cookson said.

“It’s frustrating for us. I feel bad for his family, and we have to move forward as a state,” Plocher said. “I continue to work hard… I just want to keep working.”

Sen. Dave Schatz, R-Franklin, said the revelations in the testimony are nothing new.

"I don’t think that there’s information that hasn’t really been out there in the public right now," Schatz said. "I don’t think anything new was revealed in the report."

Sen. Maria Chappelle-Nadal, D-St. Louis, who said she’s been sexually harassed three times in the Capitol, hopes this will lead to better legislation on sexual harassment and violence. She said she had to take a break from reading it because of how disturbing it is.

“As a person who’s been in that situation, it’s triggering,” she said.

"Gov. Bruce Rauner of Illinois had donated to Governor Greitens, had Gov. Greitens star in a commercial," Turner said. "I think it is incumbent upon everyone to call upon Governor Greitens to do the right thing and step down."

Members of both the House Republican and Democratic leaderships held press conferences and took questions one hour after the report was released. House Speaker Todd Richardson, a Republican, said the testimony in the report was "beyond disturbing" and praised the special committee on their work so far in the investigation.

While Richardson called for the legislature to wait until the committee completes its investigation, House Minority Leader Gail McCann Beatty, D-Kansas City, called for the resignation of the governor and supported impeachment.

“I think he has lost all credibility within the legislature. He is losing his credibility amongst the folks that are living in Missouri,” McCann Beatty said. “Without credibility, he can’t lead. He can’t walk around business as usual like none of this is happening.”

Several lawmakers are specifically calling for impeachment if Greitens does not resign.

"The House Investigative Committee’s Report contains shocking, substantial, and corroborated evidence of wrongdoing by Governor Greitens," Attorney General Josh Hawley wrote in a statement. "The conduct the report details is certainly impeachable, in my judgment, and the House is well within its rights to proceed on that front. But the people of Missouri should not be put through that ordeal. Gov. Greitens should resign immediately."

Lawmakers must be able to focus on the business of government, said Rep. Peter Merideth, D-St Louis.

“As far as I’m concerned, there is only one place we can go from here, and that is removing this governor from office,” Meridith said.

“We have to continue doing the work of the people. I’m not going to pretend that that’s not the case,” he said. “However, I also don’t want to be passing, for example, a 450-page tax bill that’s complicated and dangerous when the public’s eye is not on that. The public’s eye is on this. That’s a dangerous time to pass big policy.”

“When people come forward and share their stories, we should listen to them and we should believe them, and I believe her,” Stevens said. “I found the content of it really disturbing. You know, I’ve called on him to resign before and I still stand by that, and I think that if he doesn’t resign… We should move forward very swiftly with the process of impeachment, and that should be a priority in the last five weeks of the session.”

Rep. Jerome Barnes, D-Raytown, said, “For the good of the state, I think Eric Greitens should resign immediately. If he doesn’t, it would be the duty of the House of Representative to restore dignity to the executive branch of the state government.”

Some lawmakers weren’t ready to make a decision.

Though Rep. Deb Lavender, D-Kirkwood, has called on the governor to resign, she said she doesn’t believe making a motion for impeachment is the right path to take at this time.

Rep. Dean Dohrman, R-La Monte, said: “Here’s the way I look at it: I think that at this point it’s an incomplete process because we know more will come out in the trial, and the governor will have the chance to speak, so I think that due process has to work out.”

Rep. Sara Walsh, R-Ashland, would not return requests for comment throughout the day, but she posted her thoughts on Facebook after the reports were released, calling the information “disturbing” and “graphic.”

“Richardson has outlined a clear process of calling a special session to ensure we have time to review all the facts that will lead us to a conclusion,” Walsh said in a Facebook post. “We have a responsibility entrusted to us by the Constitution and the House collectively will take action based upon the evidence.”

I have read the official report from the Republican led Missouri House investigation, including the sworn testimony. It is clearly time to put the interests of the people of Missouri first. The Governor should resign.

I believe her. #moleg

The Governor has to resign period!!! I have tried to let the process play out, but after hearing those horrible details smh! It’s time to go! I don’t do politics, I’m here for the people! I am pissed!

The governor's serious sexual misconduct and efforts to attack the victim have brought shame on Missouri. As I did on day one, back in January, I'm calling for the governor to resign. If he doesn’t resign, the House should impeach him. #moleg #mogov https://t.co/yo2OIJwcV1

My statement on today's report from the House Special Investigative Committee. #moleg pic.twitter.com/062ZqfLhHK

Governor Greitens troubling conduct is an insult not only to my moral values, but also to the values of millions of Missourians.Read my full statement below. #MOLeg #MOGov https://t.co/urrqwG6KCu pic.twitter.com/KMPxRKTqvF