Roadblocks to suing companies and reforms to keep more people out of prison are among dozens of new laws governing Missourians.

Thanks to another new law, five Boone County men who were killed in the Afghanistan or Iraq wars will be honored with signs on Stadium Boulevard.

But several abortion restrictions that also were scheduled to start Wednesday, including a ban on abortions after eight weeks, now won’t because a federal judge blocked implementation while a legal battle continues.

Here are some of the more than 80 new laws that are going into effect:

In some rural areas of Missouri, courts have forced inmates to pay “board bills.” In other words, inmates have had to pay room and board to remain in jail.

Some, like George Richey of Appleton City, have been re-incarcerated due to an inability to pay the debt. While in jail once again, the inmates would acquire even more debt.

“I’m on disability. I make $600 a month,” Richey told the Missourian in November. “When you’re on a fixed income, that’s pretty hard on your budget. They just keep hounding me for the money.”

The new law, created through House Bill 192, establishes that a person cannot be re-incarcerated solely because of a failure to pay his or her board bills.

Three months after his birth, Simon Crosier died from complications related to Trisomy 6, a life-threatening developmental disorder. Without consent of Crosier’s parents, a “do-not-resuscitate” order was placed on his chart.

“If you were a parent and you had a child with a congenital defect, as difficult as it would be, you want to be informed,” Rep. Rory Rowland, D-Independence, said in February. ”You want that doctor to tell you the good, the bad, the ugly.”

Saddened and inspired by Simon’s story, Missouri legislators voted unanimously to pass House Bill 138 to prohibit any health care facility, nursing home, physician, nurse or medical staff from having the power to make such a decision without the written or oral consent of a parent or legal guardian.

One of Gov. Mike Parson’s largest priorities of the 2019 legislative session was to secure state funding to repair 215 Missouri bridges.

Senate Concurrent Resolution No. 14 supports the issuance of $301 million in bonds by the Highways and Transportation Commission for bridge repair and construction. The bond agreement will be paid out of the state general revenue over a seven-year period.

Sen. Dave Schatz, R-Sullivan, who sponsored the bill, said that the biggest challenge was to secure matching federal funding for the Missouri River Bridge in Rocheport.

In a statement released by Parson’s office, it was announced that Missouri would be receiving an $81.2 million Infrastructure for Rebuilding America grant from the U.S. Department of Transportation to build the Rocheport bridge.

This federal grant will allow the Missouri Department of Transportation to complete the $240 million project to build a new six-lane structure to replace the old four-lane structure. The existing bridge will be used throughout the construction of the new structure.

MoDOT Communications Director Sally Oxenhandler predicted that construction will not begin until 2021.

The bond money from SCR 14 will free up $301 million for the repair of many other bridges statewide.

Several bills that impact a plaintiff’s ability to sue businesses for damages, commonly known as “tort reform,” were passed during the session.

Senate Bill 7 will limit out-of-state residents from filing lawsuits in Missouri by requiring plaintiffs to have standing in the court where they plan to sue. The bill also restricts the ability of multiple plaintiffs to sue jointly.

Senate Bill 30 states that with lawsuits to recover damages, the failure of a plaintiff to wear a safety belt can be used as evidence of negligence.

Senate Bill 514 includes a provision — taken from the language of the vetoed House Bill 399 — that adds therapeutic care for developmental or physical disabilities to the insurance coverage mandate for autism spectrum disorders. This mandate will become applicable to policies issued on or after January 1, 2020. State Rep. Chuck Basye, R-Rocheport, worked for several years to get the legislation enacted.

Additionally, the bill states there will be no limit on the number of visits an individual with autism spectrum disorder may make to an autism service provider.

Senate Bill 89 establishes that the director of the Department of Revenue will revoke the driver’s license of anyone whose negligence caused them to strike a worker, utility worker or highway worker in a designated work zone. A person’s license will also be revoked if his or her vehicle strikes an emergency responder in a designated active emergency zone.

Honoring those lost in war 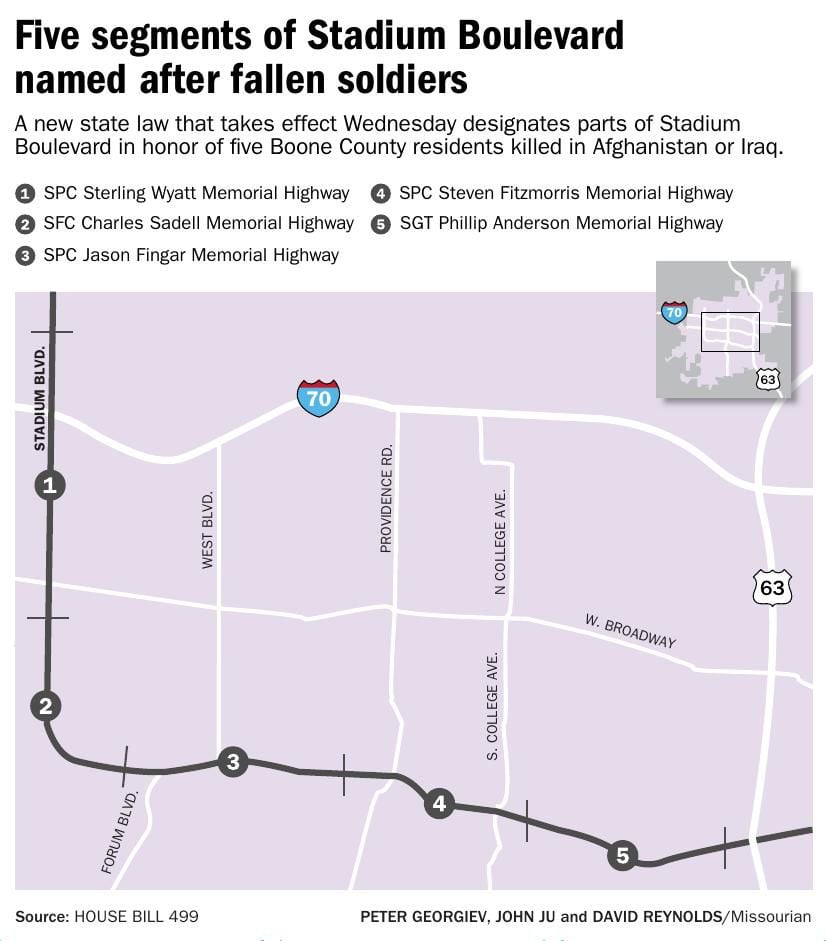 “It’s just a way to honor the sacrifice,” Basye said. “The families are the ones who suffer the most and have to live with the loss of someone they love dearly. And so, to have that remembrance there, I think that’s a way of honoring their son and the sacrifice.”

Signs will be placed along the highway from Audubon Drive to the intersection of State Highway E and Aaron Drive to indicate the sections of the highway that are assigned to each war veteran.

Missouri lawmakers passed House Bill 126, otherwise known as the “Missouri Stands for the Unborn Act.” The new law states that an abortion shall not be performed at or after 8 weeks of gestation, with the exception of medical emergencies.

The law does not, however, include an exception for cases of rape or incest.

A U.S. district judge put much of the new legislation on hold Tuesday, awaiting the result of a legal challenge. He allowed one part of the bill to stand: a ban on abortions based solely on race, sex or a diagnosis indicating the potential for Down syndrome.

If the rest of the law goes into effect, doctors who violate the eight-week ban will be guilty of a class B felony, be subject to the suspension or revocation of their professional licenses and could face up to 15 years in prison.

However, the bill states that a woman who has an abortion will not be prosecuted for conspiring to violate the law.

In response to the passing of the bill, multiple critics of the bill pushed for referendums, hoping to put the law to a 2020 vote and overturn it. In order to put the issue on the 2020 ballot, 100,000 signatures were needed. But critics could not begin to collect signatures until Secretary of State Jay Ashcroft certified a ballot title.

The No Bans on Choice Committee and Missouri’s American Civil Liberties Union sued Republican Secretary of State Jay Ashcroft on Aug. 22 — less than one week before the bill was to become law. The critics’ attorneys said that Ashcroft had delayed certifying a ballot title in order to prevent them from acquiring enough signatures. Ashcroft has pushed back, blaming the law’s opponents for starting the process too late.