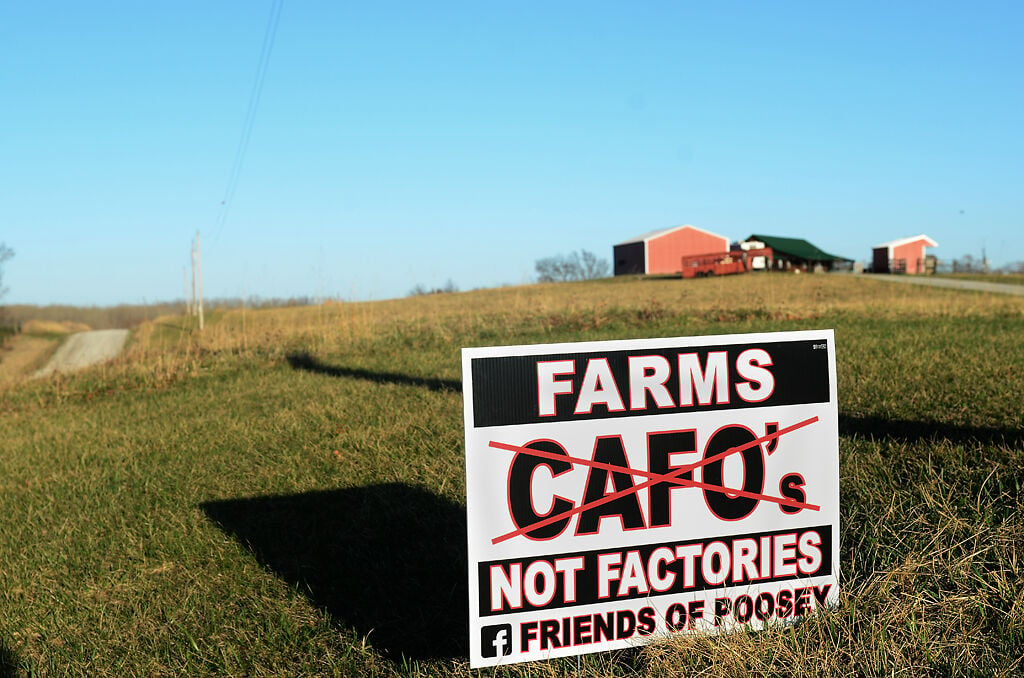 Bert Wire’s farm sits behind a “Farms not factories” sign. Wire’s property is just down the street from a CAFO site, roughly 2,200 feet. 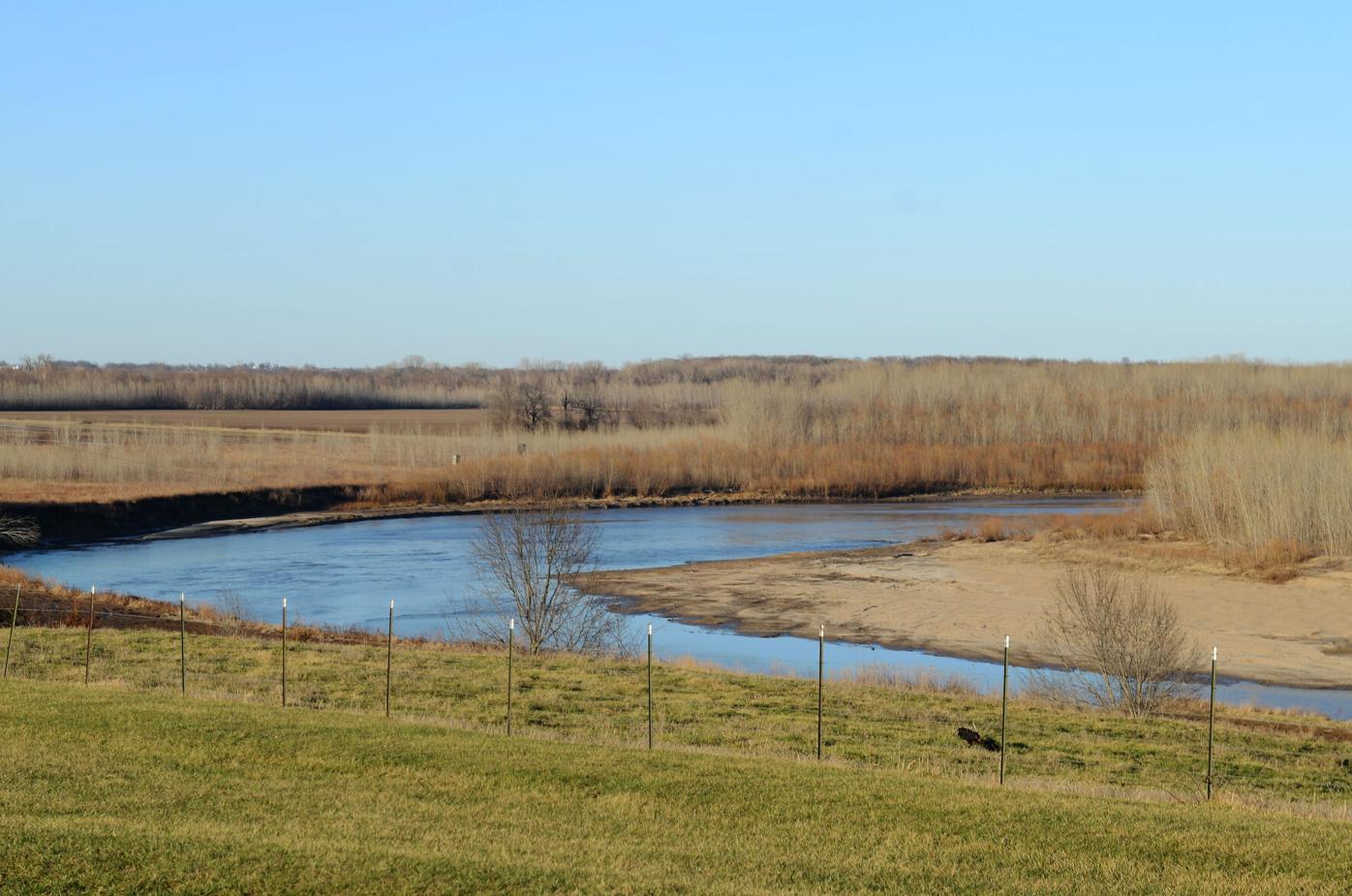 The Thompson River sits next door to the permitted CAFO site in March in Chillicothe. Neighbors of the site fear that pollution will spread from the pond into the creek on the property, which feeds into the Thompson and Missouri rivers.

Bert Wire’s farm sits behind a “Farms not factories” sign. Wire’s property is just down the street from a CAFO site, roughly 2,200 feet.

The Thompson River sits next door to the permitted CAFO site in March in Chillicothe. Neighbors of the site fear that pollution will spread from the pond into the creek on the property, which feeds into the Thompson and Missouri rivers.

JEFFERSON CITY — Legislation that would limit individuals authorized by state law to inspect animal agriculture facilities is headed to the desk of Gov. Mike Parson.

However, bills designed to restrict foreign ownership of agricultural land failed to advance, as did a bill that would limit the authority of some state natural resource commissions to set their own fee structures and enforce state rules stricter than those on the federal level.

Rep. Kent Haden, R-Mexico, has carried the ag inspections legislation for three years. Haden said the bill limits unnecessary government oversight and reduces threats to biosecurity on large farms, according to previous reporting by the Missourian. The legislation was widely supported by agriculture industry groups.

Corinne Bromfield, a veterinarian with UM Extension specializing in biosecurity for swine facilities, says that some viruses that “used to walk in on four legs, now walk in on two.” In other words, humans can unknowingly carry deadly viruses to concentrated animal facilities, such as Porcine Reproductive and Respiratory Syndrome Virus (PRRSV). The swine industry has documented more than $600 million in annual losses due to the virus.

Missouri does not have statewide biosecurity protocols at farm facilities, Bromfield said, but many producers have financial incentives to keep their pigs virus free.

Haden also says the bill clears up confusion around who has the right to inspect agriculture activities by limiting inspection authority to representatives from the Missouri Department of Agriculture, the Missouri Department of Natural Resources, the local county sheriff or other federal or state agencies that oversee the production of eggs, dairy products or the raising of livestock or poultry.

But Melissa Vatterott, food and farm policy director for the Missouri Coalition for the Environment, said confusion about state regulations is not a compelling justification for this legislation.

“There is an assumption in American law that producers know the parameters within which they function,” Vatterott said. “I think informed business operators, which is what any farmer is, need to abide by the health and safety regulations that their local government believes is important for that local community. This legislation just makes that more difficult.”

The legislation would prohibit local health officials from inspecting facilities within their jurisdiction, unless individual producers offer their consent. To some, the bill is an extension of the controversial Senate Bill 391 signed into law in 2019, which prohibits local health ordinances that are more strict than statewide regulations for concentrated animal feeding operations (CAFOs). That legislation is being challenged in court by the Cedar County Commission and the Cooper County Public Health Center.

The bill also limits who can testify regarding activities related to agricultural facilities in a criminal or civil case.

The legislation “pertains to ‘livestock’ operations, specifically,” Vatterott said. “It is clear this is meant to continue to limit regulation or knowledge of what goes on in CAFOs despite the scientific evidence that these operations pose numerous health, safety and environmental concerns.”

An omnibus bill that would have modified certain aspects of various statewide natural resources commissions’ operations will not become law this year.

Among the many items in the legislation was wording that would have weakened the regulatory powers of the state’s Hazardous Waste Management Commission, prohibiting it from enforcing state rules stricter than federal regulations. It also would have expedited the expiration of certain natural resource commissions’ authority to set their own fee structures. Opponents of the bill said such a move could endanger the financial stability of the Department of Natural Resources.

Other sections of the bill would have affected the Public Service Commission, the Missouri Clean Water Law, the motor vehicle emissions inspection program and oversight of anhydrous ammonia.

Three bills to limit the acquisition of Missouri farmland by foreign entities were introduced during this legislative session, marking a bipartisan effort to curb foreign interests in rural regions of the state. None made it through either legislative chamber, likely due to strong pushback from agricultural industry groups such as the Missouri Pork Association and Smithfield Foods, despite having the support of the Missouri Farm Bureau.

According to the Missouri Science and Technology Policy Initiative, a non-profit organization that provides informational testimony to state legislators, Missouri has approximately 324,600 acres of foreign-owned agricultural land, and ranks 30th in the country for foreign-held agriculture lands.

Foreign ownership of farmland was banned in Missouri in 1978, but that ban was lifted in 2013 when Missouri lawmakers slipped language into an omnibus bill that opened up 1% of the state’s farmland to foreign entities, according to previous reporting by the Missourian.