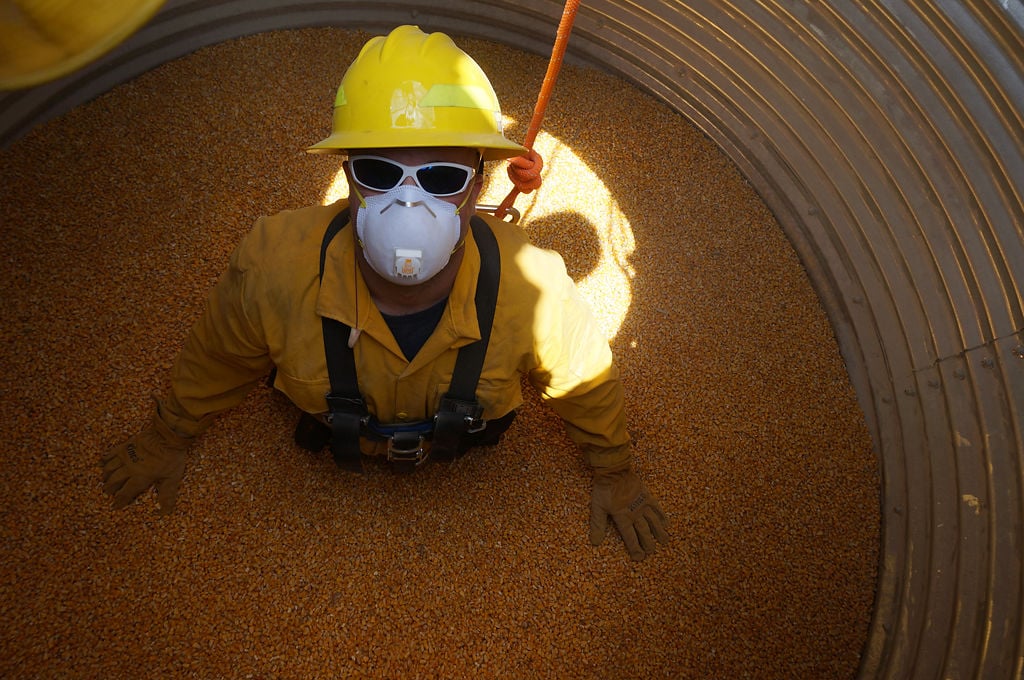 A member of the MU Fire and Rescue Training Institute stands in a simulated grain elevator during a training exercise. The grain engulfment rescue course educates Missouri emergency responders on the hazards associated with grain bins and grain entrapment, and provides the necessary knowledge and skills to enable them to safely perform a grain engulfment rescue using available resources. 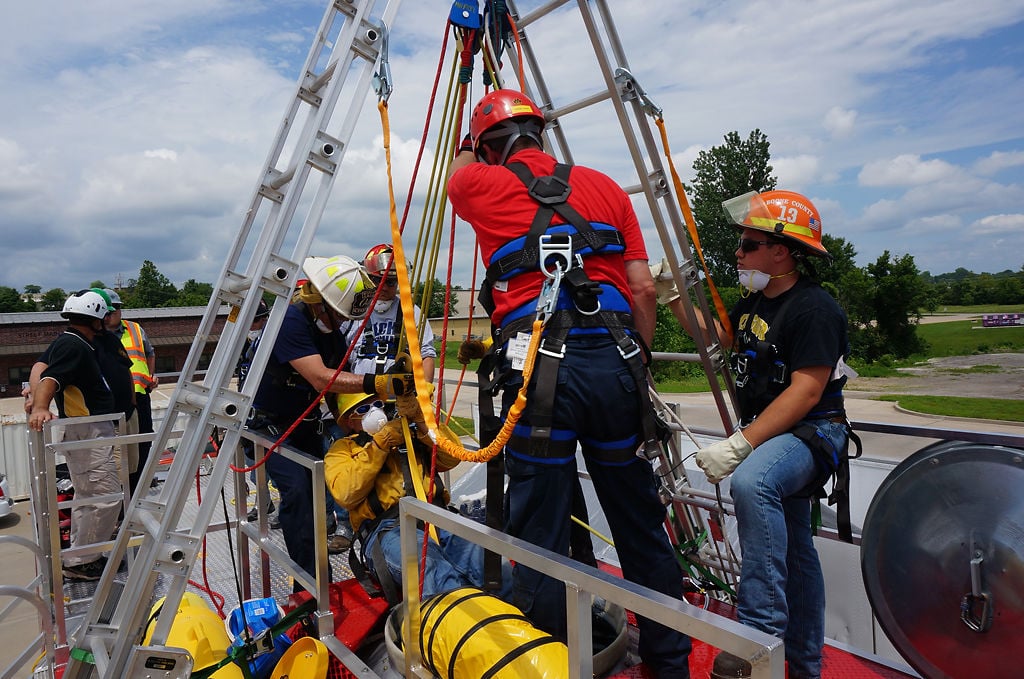 Trainees and instructors simulate a grain entrapment scenario as part of a class at the MU Fire and Rescue Training Institute. The simulator was acquired in 2015 with the help of a grant from the U.S. Department of Homeland Security and FEMA’s Assistance to Firefighters grant.

A member of the MU Fire and Rescue Training Institute stands in a simulated grain elevator during a training exercise. The grain engulfment rescue course educates Missouri emergency responders on the hazards associated with grain bins and grain entrapment, and provides the necessary knowledge and skills to enable them to safely perform a grain engulfment rescue using available resources.

Trainees and instructors simulate a grain entrapment scenario as part of a class at the MU Fire and Rescue Training Institute. The simulator was acquired in 2015 with the help of a grant from the U.S. Department of Homeland Security and FEMA’s Assistance to Firefighters grant.

Bob Haworth, fire chief of the volunteer fire department in Belgrade, described the scene of the accident with one word: blood.

A man working on a bulk feed truck at a local feed store was caught in an auger, and it ripped off his leg just below the knee. The man was able to climb out of the truck, and his co-worker used a belt as a tourniquet and called 911.

When Haworth arrived, a trail of blood a foot wide had spilled down the side of the truck, he said.

"I would not wish anyone to see that," Haworth said. "Because I honestly don't know how much he had lost, but there was blood everywhere."

When the air ambulance arrived, the helicopter did not even stop running. The man was loaded and flown to a hospital about 90 miles away in St. Louis. Miraculously, he survived and is now a volunteer for the same fire department that saved his life, Haworth said.

Incidents like this don't always have a happy ending. Farm and agricultural work is a dangerous profession, especially in rural areas where health care is sparse.

When a farmer experiences a traumatic injury, every second it takes to get to a care facility is critical, but those care facilities are becoming fewer and farther between as rural hospitals close. According to Hospital Industry Data Institute statistics, the average distance traveled by rural hospital patients who did not survive illness or injury — either on the way to a care facility or at the facility — was 32.1 miles, compared to 9.1 miles for non-rural hospital fatalities.

The status of health care in rural parts of Missouri paints a bleak picture for farmers who live and work in such a dangerous profession. On top of working under constant risk of injury and death, farmers have very few options when it comes to the types of care they can receive. And, when and if that care is available, patients can be billed exorbitant costs.

According to the Centers for Disease Control and Prevention, about 243 agricultural workers in the country suffer lost work time every day because of injuries, and 5% of those injuries result in permanent impairment. The CDC reports that 417 farmers and farm workers died in 2016 from a work-related injury, a fatality rate of 21.4 deaths per 100,000 workers.

The CDC also estimates that every day, about 100 agricultural workers suffer a lost-work-time injury.

Dave Dillon, Missouri Hospital Association spokesman, who also served as the former deputy director of the state Department of Agriculture, said the farming industry is, by nature, extremely dangerous. There's potential exposure to chemicals and burns.

Farmers who operate dangerous equipment can get caught under tractors, suffocate in grain storage bins or get tangled with an auger. In animal agriculture, particularly with the large amount of cattle farms in Missouri, farmers can get trampled, kicked or stomped.

"For us, the real question is, if one of these bad things happen, then it becomes 'how quickly can we get to care?'" Dillon said.

In rural Missouri, Dillon said, access to most services — whether going to the grocery story or getting a diesel truck filled up — takes longer compared to an urban area because of the geography. But access to care is a life-or-death situation versus a trip to the grocery store.

"What we find is that it's more and more difficult for emergency care, as we see some hospitals close, to have those individuals have local access," he said.

The closure of a rural hospital can send ripples through a community, particularly a community that relies on such a dangerous industry like farming. Six rural hospitals have been shuttered in Missouri over the last five years, with three closing between 2018 and 2019, according to data from the Cecil G. Sheps Center for Health Services Research at the University of North Carolina at Chapel Hill.

The hospitals ranged in size from the 100-bed Twin Rivers Regional Medical Center in Kennett, which closed in 2018, to the 15-bed I-70 Community Hospital in Sweet Springs, which closed this year. With the closure of a hospital, an injured person would have to add more time and distance to travel to the next closest center.

After the closure of Twin Rivers Regional Medical Center, Kennett-area residents are expected to travel a total of more than 1 million additional miles to receive hospital care, according to the Missouri Hospital Association.

According to association, 37% of Missouri’s population is rural, approximately 2.2 million people. However, only 9% of licensed Missouri physicians practiced in rural areas in 2014, and the number of rural physicians has declined by 15% since 2011, according to Hospital Industry Data Institute statistics. 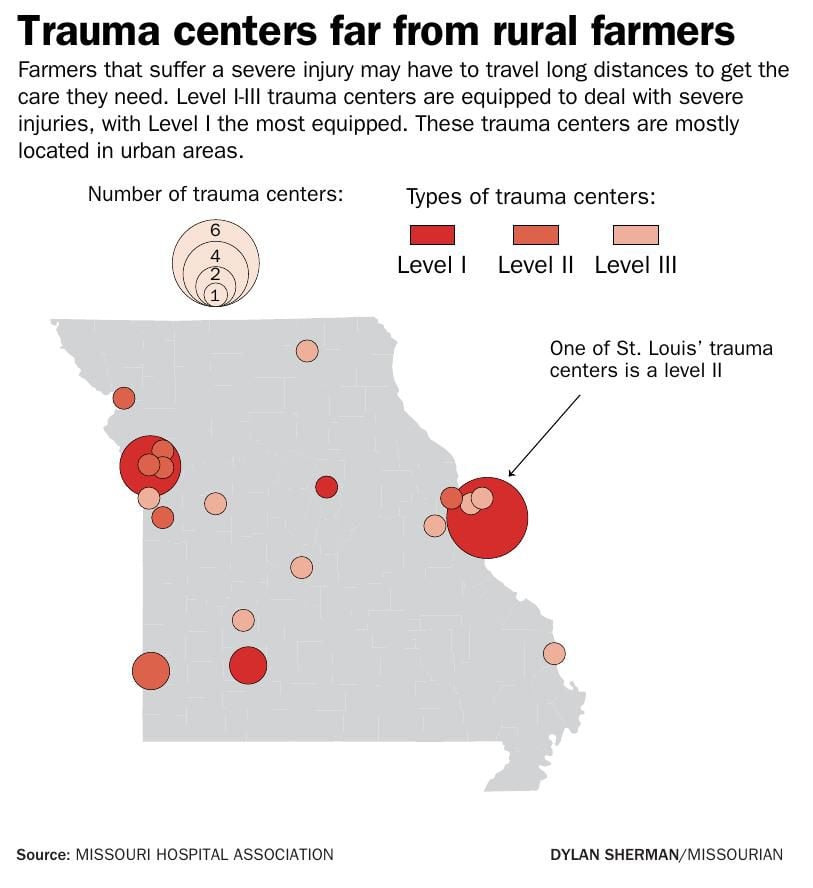 Dillon said he would like to see more support for a system where small rural hospitals are the first point of care for patients in rural Missouri. That way, patients can get stabilized before they are transferred to a higher-level hospital.

"Even without closures, rural residents travel farther to get care. You have to. It's the way rural Missouri is built," Dillon said. "But, in an emergency, it makes a big difference."

When Steve Kimker slipped off his tractor in 1996 and cracked his ribs and sternum, he had to drive himself to the nearest hospital 18 miles away.

It was a snowy day on Kimker’s family cattle farm in Bourbon, and he was riding a Ford 4000 tractor, unrolling a hay bale to feed his cows. About 8 inches of snow covered the ground.

The bale spun out of the tractor, and Kimker moved his foot to the clutch to stop, but it slipped. The tire climbed on top of the hay bale, and the tractor began to tip. Kimker tried to jump off, he said, but because it was wet, he wasn't able to get entirely off. The backside of the tire landed on his side and back.

He was able to walk back to his house and drive himself to the hospital in Sullivan.

Tractors are the leading cause of death and injuries that lead to disabilities on farms, according to a study by the U.S. Department of Agriculture. Most deaths are caused by the tractor tipping over on top of its operator.

Often, when an incident on a rural farm occurs, volunteer firefighters are the first to arrive. In fact, the National Fire Protection Association estimates that 65% of the nation’s fire departments are made up of volunteers.

Kraig Bone owns a company in Cadet that trains volunteer fire departments to respond to large machinery accidents on farms.

In Missouri's case, after narrowing the data down to focus on agricultural incidents, more than 700 incidents could be considered farm-related in 2016. These incidents included vehicle injuries, search and rescues and other medical assists.

When an accident happens in a remote area and an urgent response is needed, air evacuation is often the best option for patients in time-critical situations.

Missouri has 13 providers of air ambulance services with rotary aircraft scattered over 36 bases, according to a report released in January by the Missouri Department of Insurance, Financial Institutions and Professional Registration.

The largest of those companies is Air Evac, an independent company founded in 1985 in West Plains with 141 helicopter air ambulance bases across 15 states; 13 are in Missouri.

The Missouri Hospital Association partners with Air Evac, and the company was responsible for 3,570 air evacuation transports in 2017, about a third of all air ambulance transports in the state that year.

The company owns its own helicopters, crew quarters and hangers and employs its own pilots and crew members.

Shelly Schneider, public relations manager for Air Evac, said the first thing someone should do after an accident is call 911. Air Evac promotes a practice of "early activation," where emergency medical service workers or other medical professionals call their company and let them know of the situation.

Although air ambulance services can greatly reduce a patient’s time before receiving medical care, the cost can be exorbitant.

Air ambulance companies billed Missourians nearly $25.7 million for services in 2017 alone, an average of nearly $20,000 per individual, according to the January report. The Government Accountability Office reported in 2017 that the median cost for helicopter air ambulance service doubled from around $15,000 to about $30,000 per transport between 2010 and 2014.

Because the air ambulance industry has very high fixed-costs compared to "per trip" costs, patients are charged for even short flights that can run to tens of thousands of dollars, the report noted.

Air ambulance reimbursement rates are fixed by Medicare and Medicaid, and providers that participate in these programs have to accept these rates as payment in full. They cannot "balance bill" patients for amounts charged over the reimbursement rates.

One of the ways companies like Air Evac have tried to limit these high costs is through membership fees. Air Evac's parent company, Air Medical Group Holdings, also oversees the AirMedCare Network. People can become members of the network for $85 a year per household, and Air Evac flights are then covered by whatever the member's insurance company pays.

According to the St. Louis Post-Dispatch, air ambulance memberships are frequently advertised in rural areas, and the 126,000 members of the Missouri Farm Bureau get a discounted rate if they choose to buy an Air Evac membership.

Independent companies like Air Evac have become more popular in certain areas because they reduce the risk of paying high fees, said Jaclyn Gatz, vice president of safety and preparedness. When an uninsured patient is flown via medical evacuation, a number of air ambulance providers will use aggressive collection strategies, such as placing liens on homes or garnishing wages, according to the January report.

"Any time you’re on an aircraft, it's going to be expensive," Dillon said. "A big determining factor is how much your insurance covers. If you've got a fairly gold-plated insurance plan, it may cover a lot of or all of medical transport. If you don't, then you may be exposed to significant costs for that medical transport."