The state’s top law enforcement official has requested the claims of civil rights violations against the state and five state employees related to Carl DeBrodie’s death be dismissed, according to court filings.

DeBrodie, who was mentally disabled, was found dead in a Fulton storage shed, encased in concrete, after he had a seizure and was left to die in a bathtub, according to court documents. Two officials who were required to make face-to-face visits filed false reports about making contact with DeBrodie after his death.

Attorney General Josh Hawley submitted a motion Tuesday to dismiss the claims against the Department of Mental Health and employees who oversaw its division of developmental disabilities. DeBrodie’s mother, Carolyn Summers, and sister-in-law, Carol Samson, had no standing to sue the state, Hawley argued.

“Even if true, (their) allegations are not adequate to establish that the State Defendants have violated Mr. DeBrodie’s constitutional rights because they do not show a causal connection between their alleged conduct and Mr. DeBrodie’s death and, even if such a connection were shown, the alleged conduct is not egregious, outrageous, or shocking to the conscience,” the court document reads, referring to an earlier case that found official misconduct must be “shocking to the contemporary conscience” to be considered a constitutional violation.

The mental health department and its employees are part of a long list of defendants the DeBrodie family included in its lawsuit.

Earlier this month, five people — at least two Second Chance employees — were arrested in connection to DeBrodie’s death. Three have pleaded not guilty in the case, according to the Associated Press.

Before DeBrodie was left to die in a bathtub, employees at Second Chance Homes, where he lived, forced him to fight other residents, according to court documents.

Also, Second Chance employees continually canceled state-mandated meetings DeBrodie was supposed to have with his local case manager, according to the Fulton Sun. That information came after the newspaper requested documents from the Action Plan Tracking System, which the Department of Mental Health uses to track issues that “require action,” according to the department’s website.

DeBrodie’s case manager “went to Second Chance every month, but admitted she didn’t always see Carl,” Julia Kaufmann, the director of Callaway County Special Services, told the Sun. “She was told that at times that he was out on outings, but you should always go back.”

In their complaint, DeBrodie’s family allege the state failed to establish policies and practices that ensured the health and safety of people such as DeBrodie.

In his filing, Hawley pushed back, arguing the state had no role in his death and had no reason to suspect DeBrodie was in danger.

“No affirmative conduct of the State Defendants created a danger to Mr. DeBrodie,” the motion reads. “The state is alleged simply to have licensed and certified Second Chance Homes as a residential care facility and to have contracted with Second Chance Homes and other entities to provide services for Mr. DeBrodie. These alleged activities are insufficient to create any liability on the part of the (state).

Last year, lawsuits against the state cost taxpayers about $23 million, according to a report Hawley released in February. 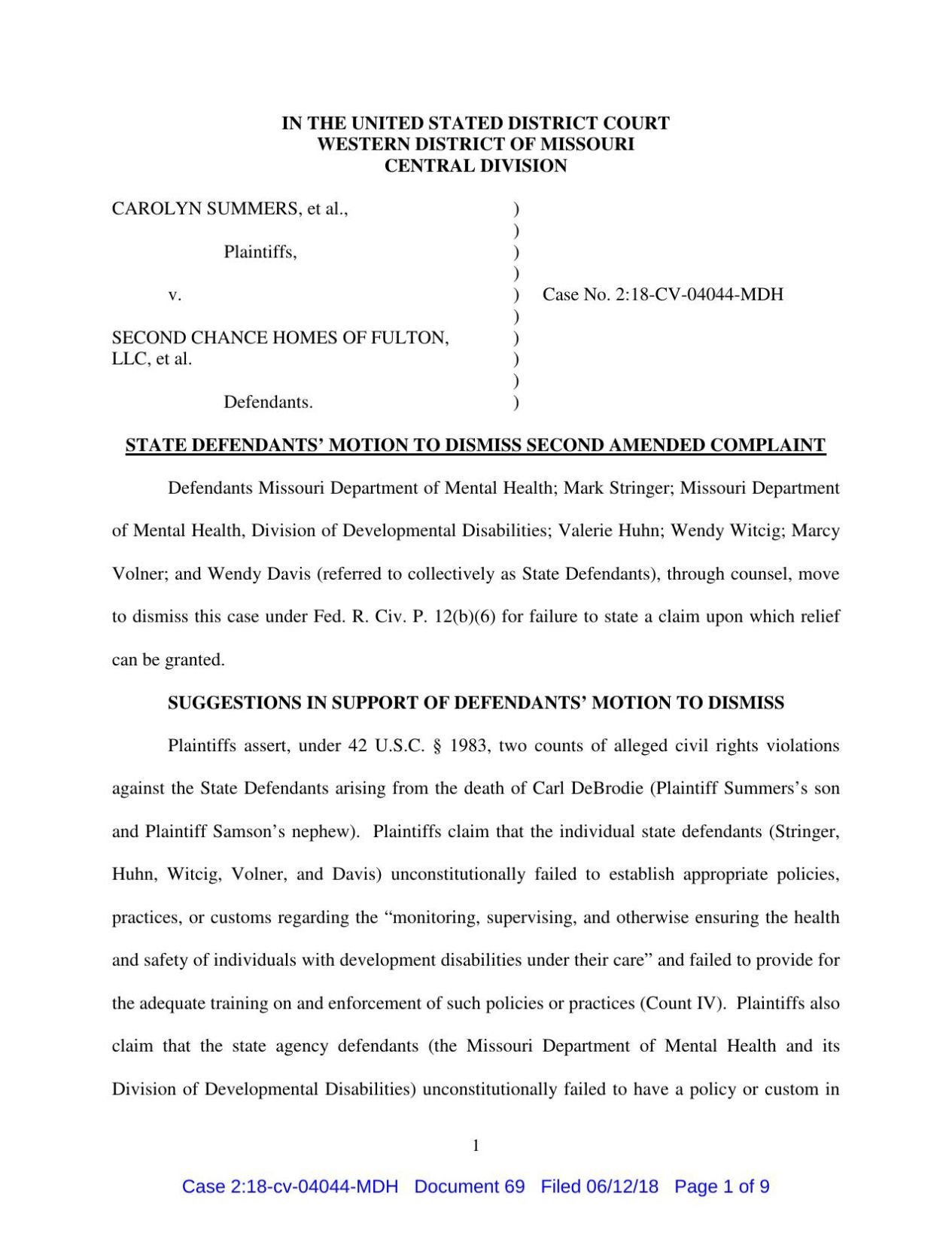