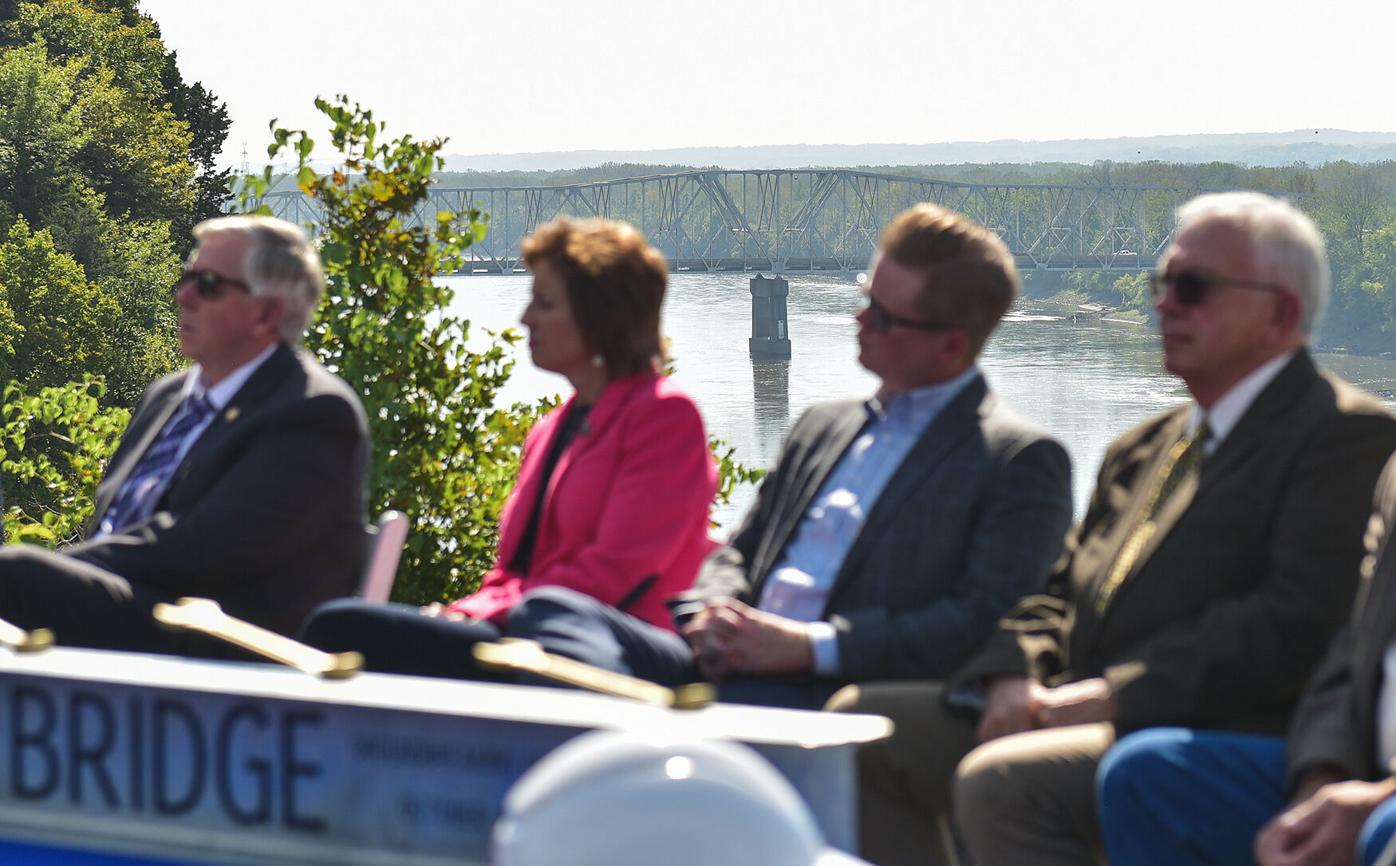 From left to right, Gov. Mike Parson, U.S. Rep. Vicky Hartzler, state Sen. Caleb Rowden and Boone County Presiding Commissioner Daniel Atwill listen to Missouri Department of Transportation Director Patrick McKenna speak with the I-70 bridge behind them Tuesday at Les Bourgeois Vineyards Bistro in Rocheport. Supporters and those involved in the project came to celebrate the start of construction on the replacement bridge. 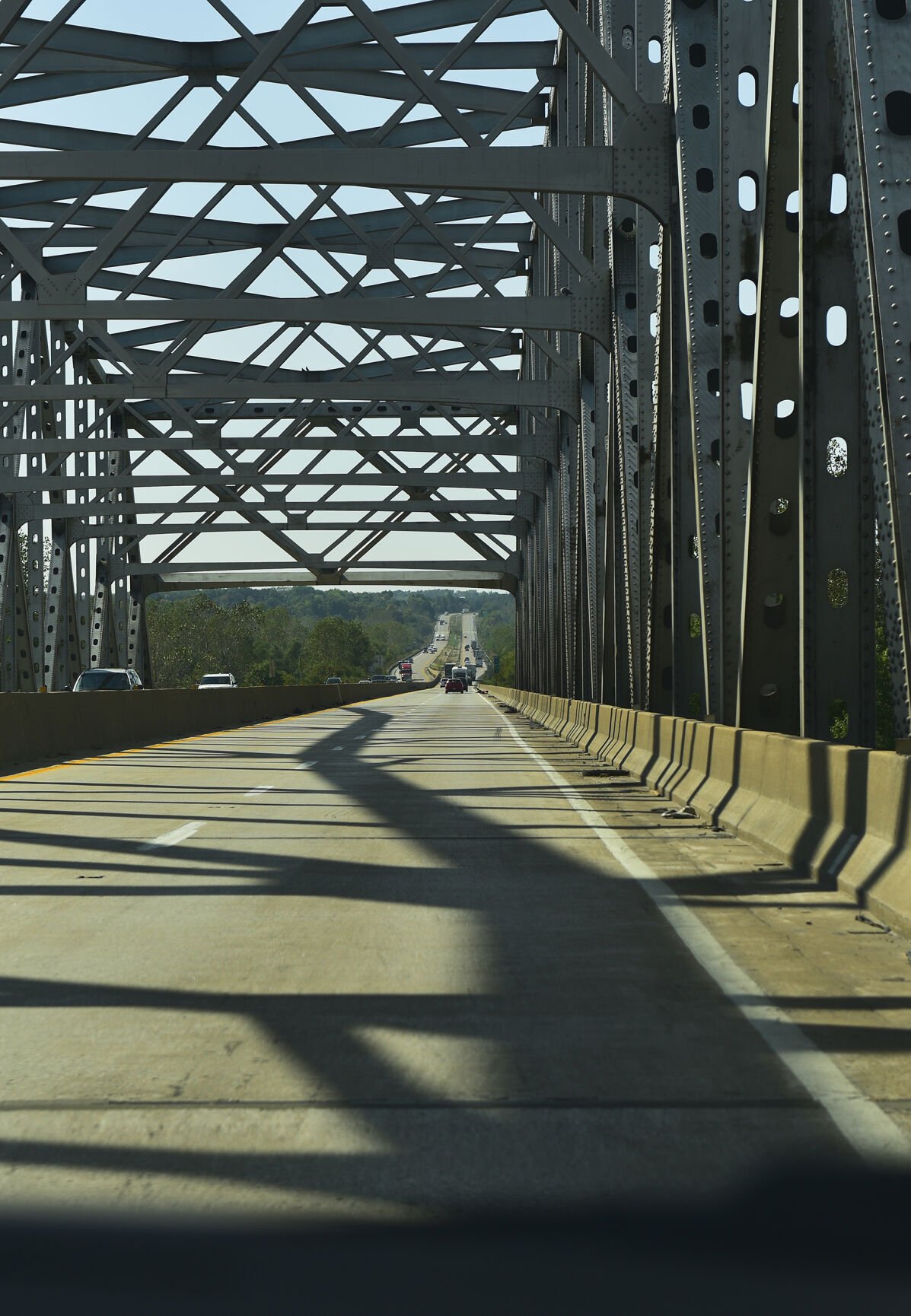 Shadow on I-70 Bridge on Tuesday at Les Bourgeois Vineyards Bistro in Rocheport. The new bridge will address safety issues with the current one. 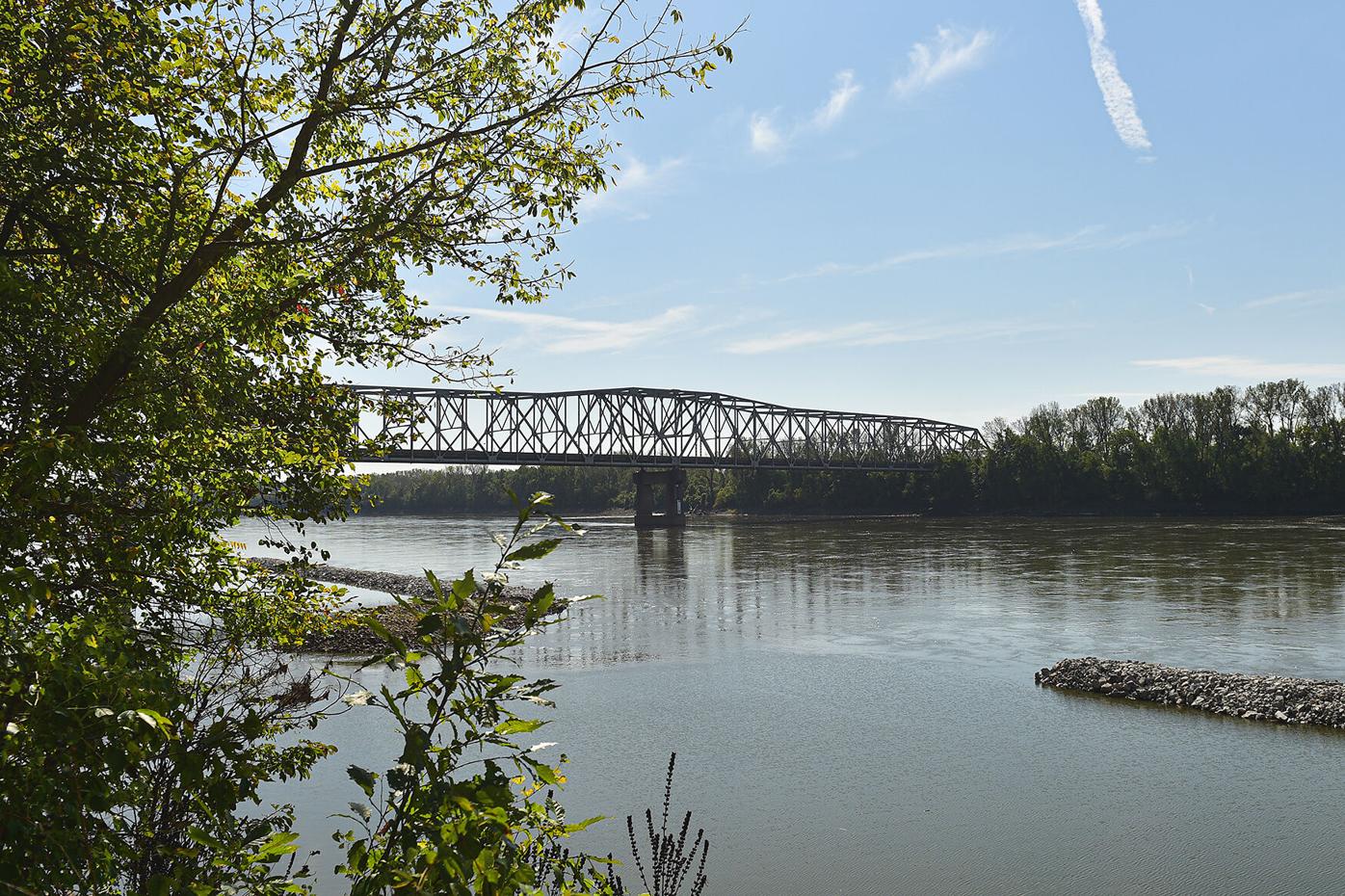 The I-70 bridge stands connecting Boone and Cooper counties over the Missouri River on Tuesday at Les Bourgeois Vineyards Bistro in Rocheport. The bridge was originally built in 1960. 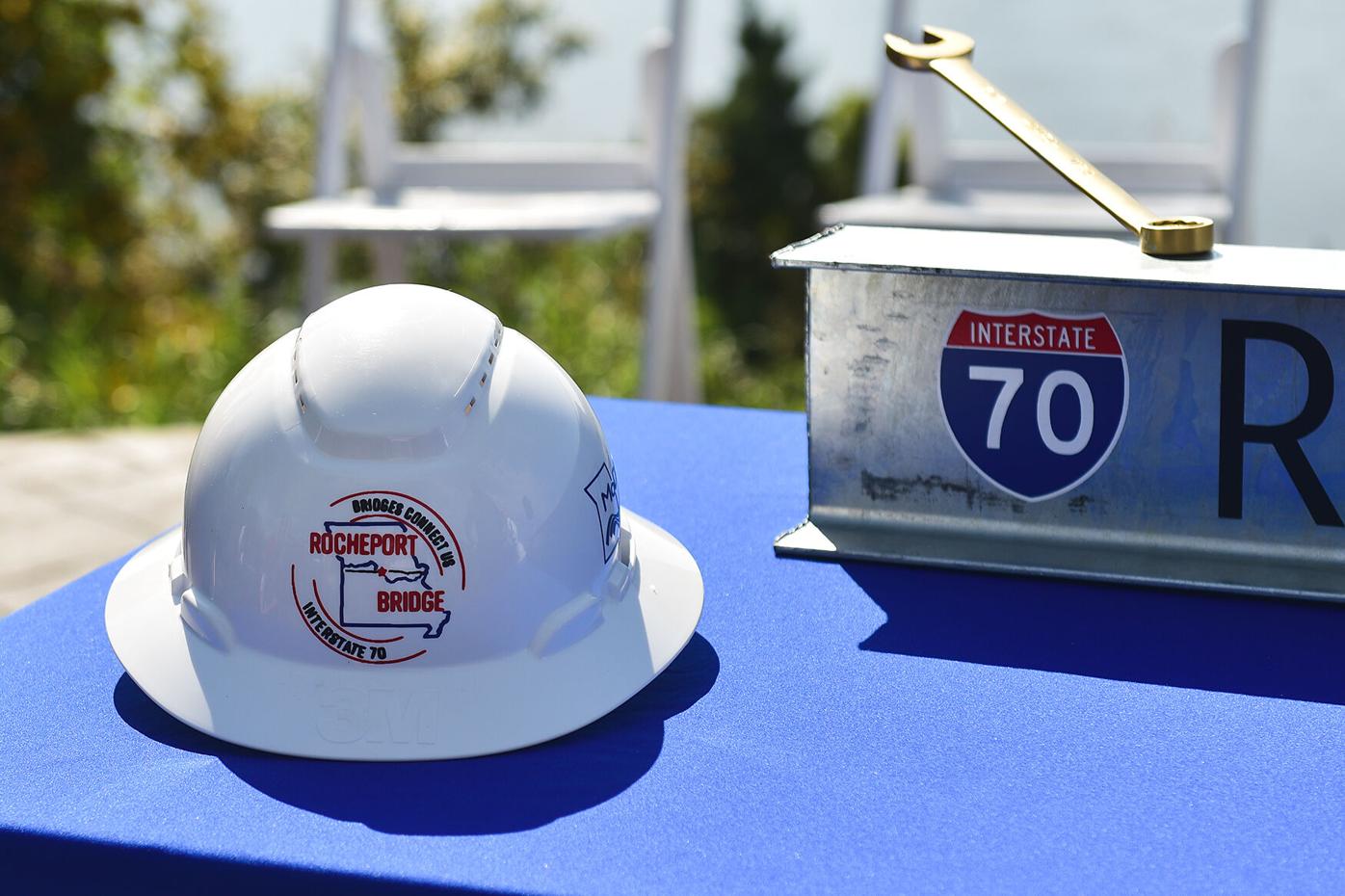 A commemorative hard hat lies on a table Tuesday at Les Bourgeois Vineyards Bistro in Rocheport. MoDOT received an $81.2 million INFRA Grant in 2019 for the project. 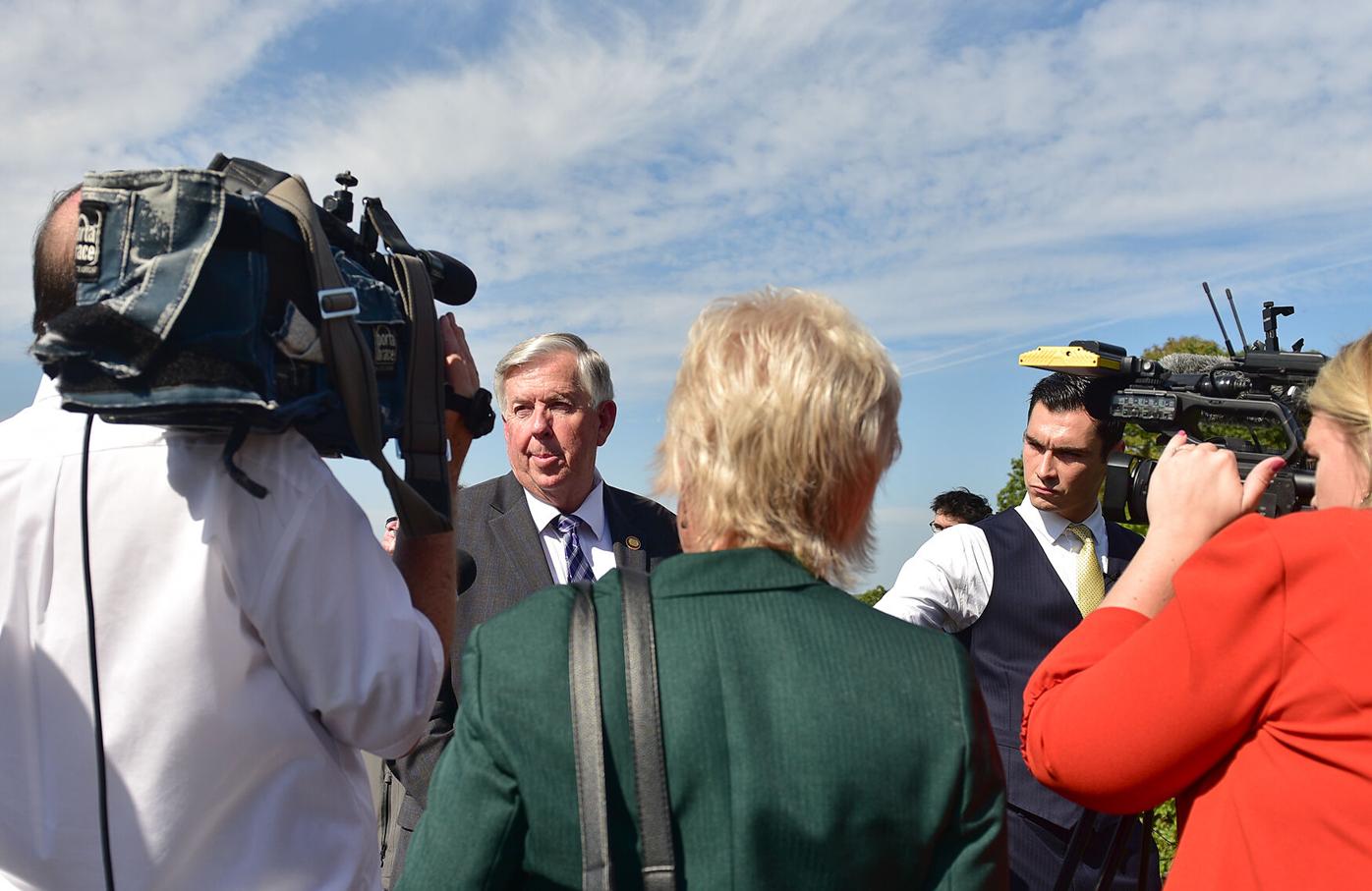 Gov. Mike Parson talks to the media after the I-70 Bridge groundbreaking ceremony on Tuesday at Les Bourgeois Vineyards Bistro in Rocheport. Two bridges will be built as part of the project. One bridge will have eastbound traffic, and one will have westbound traffic. 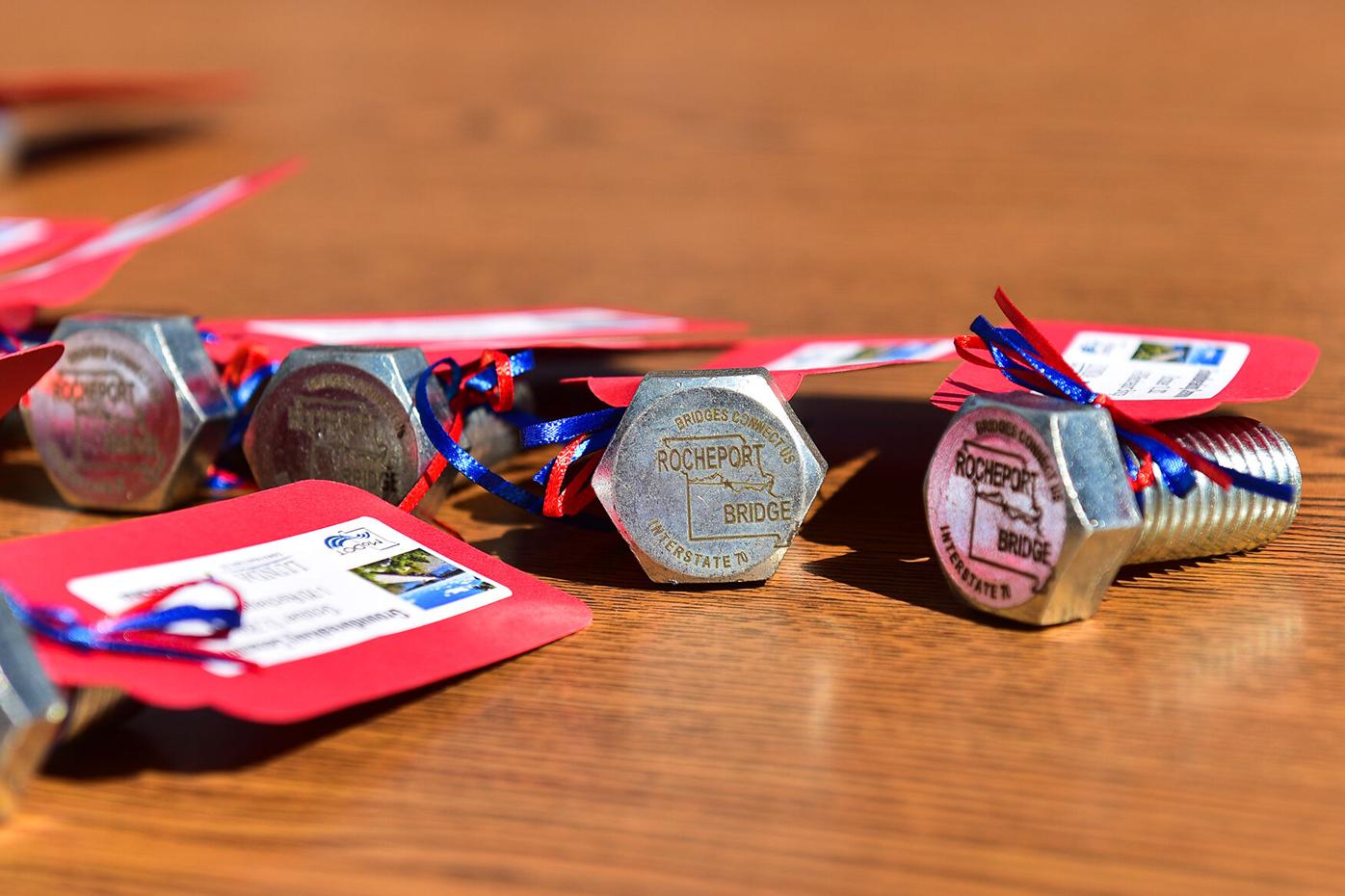 Commemorative bolts lie on a table Tuesday at Les Bourgeois Vineyards Bistro in Rocheport. It is estimated the entire bridge project will cost about $240 million. 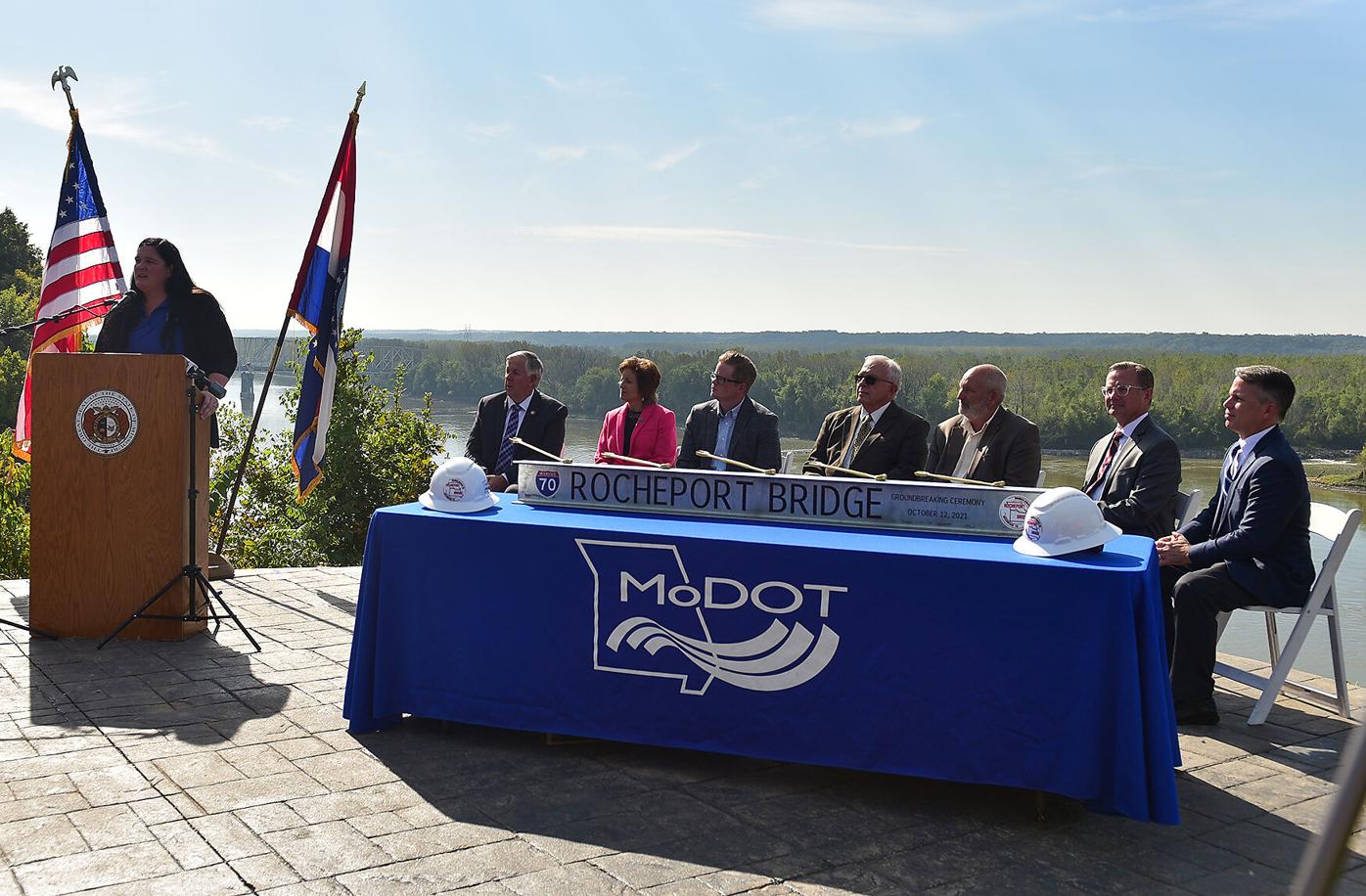 Speakers listen to Project Director Brandi Baldwin speak at the groundbreaking ceremony of the new I-70 bridge Tuesday at Les Bourgeois Vineyards Bistro in Rocheport. The overall Rocheport bridge replacement construction project is estimated to be completed by 2024.

The project director for the I-70 bridge replacement at Rocheport stood with a wrench in her hand Tuesday, alongside a lineup of Missouri lawmakers and other officials.

“Righty tighty,” said Brandi Baldwin, as she turned a bolt on a ceremonial I-beam to mark the start of nearly three years of bridge construction.

In unison, the group turned their wrenches as cameras snapped photos to preserve the moment for Missouri Department of Transportation history.

Baldwin and top state brass, including Parson, U.S. Rep. Vicky Hartzler, state Sen. Caleb Rowden and MoDOT director Patrick McKenna, joined the “ceremonial tightening of the bolts” as part of a groundbreaking that signaled the beginning of a project that will be ready to open in the summer of 2024.

The I-70 Rocheport bridge, built in 1960, carries 12.5 million vehicles each year, according to MoDOT. Trucks carrying goods to all 48 contiguous states will cross it within just two days.

The bridge is now rated in poor condition, prompting concerns that weight restrictions might be imposed. Given its age, state authorities determined that replacement was the best course of action.

Once completed, the new bridge is set to last 100 years, Baldwin said. Estimated cost is around $240 million, with $81.2 million coming from MoDOT’s largest competitive grant ever, the Infrastructure For Rebuilding America Grant, according to the governor’s office.

But officials touted the bridge’s economic benefits and hours of traffic delays that will be avoided by not trying to maintain the existing bridge.

Don Baragary, presiding commissioner of Cooper County, said recent successful negotiations to bring Kawasaki Motors — and more than 250 new jobs — to Boonville can be attributed to the appeal of the new bridge connecting his side of the river with Columbia.

“That clinched the deal for us,” Baragary said.

The commissioner called Columbia a “bedroom community” for Cooper County, referring to Columbia as merely a home to Cooper County’s workforce, drawing a laugh from the crowd.

Columbia Mayor Brian Treece described the bridge as an investment.

“What a great day for Columbia and mid-Missouri,” Treece said.

The city contributed $2 million to the project, which McKenna called “astounding”.

“I’m not a mayor that likes to spend taxpayer dollars outside our city limits,” Treece said. “But then you start thinking about the backlogs, you know, eight hours back to Kingdom City or to Boonville, and pretty soon it was pretty clear how that was going to pay off.”

Early stages of the project are already in motion, with MoDOT crews now working on the lanes of the existing bridge. The department is awaiting permits from the U.S. Army Corps of Engineers, expected any day now, that will allow work to begin in the water.

MoDOT reevaluated the environmental impacts of the project in March after changes were made to the plans. Officials found that the project is not expected to create a significant impact on plants or wildlife.

The report did find, however, that more than 42 acres of wetlands will be impacted, compared to an original estimate of 8 to 10 acres. The increase can be attributed to the additional need for access roads and staging areas.

Several endangered and threatened species are known to live in the general area of the project as well, including bats, fish and other wildlife. MoDOT, working with the Fish and Wildlife Service, must keep an eye out for these species to avoid harm.

“We’ll keep our eyes peeled,” Baldwin said. “I think our biggest thing we have to watch out for is migratory birds, and that’ll really come into play when we demo the existing structure.”

Under the Migratory Bird Treaty Act, the project’s commotion must not disturb the nests of protected species when there are eggs or young dependent on a nest. That period tends to fall during late spring and early summer and, given the project’s multi-year timeline, will be of concern to the department throughout construction.

Running buffalo clover, a plant species once named extinct and thought to be native to the area, was not found in a survey and declared not at risk by the report. Since early August, the clover has enjoyed “recovered” status, with 175 different populations occurring across six different states, according to the Fish and Wildlife Service.