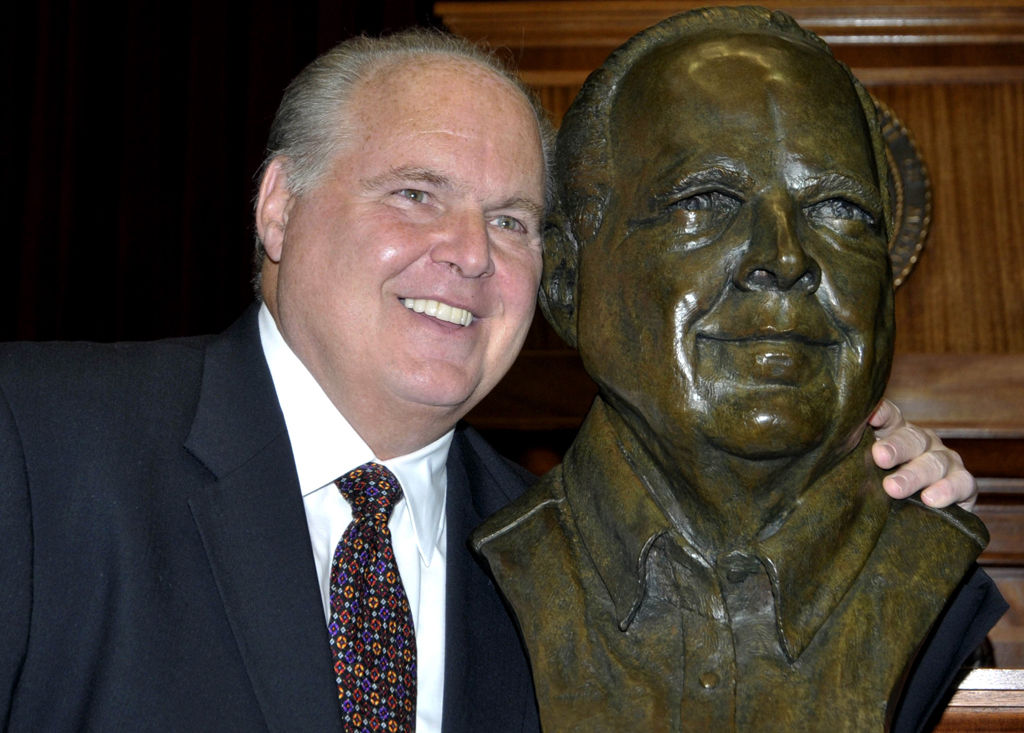 In this file photo, Rush Limbaugh poses with a bust made in his likeness for the Hall of Famous Missourians just outside the House chamber. Limbaugh bust displayed at Missouri Capitol 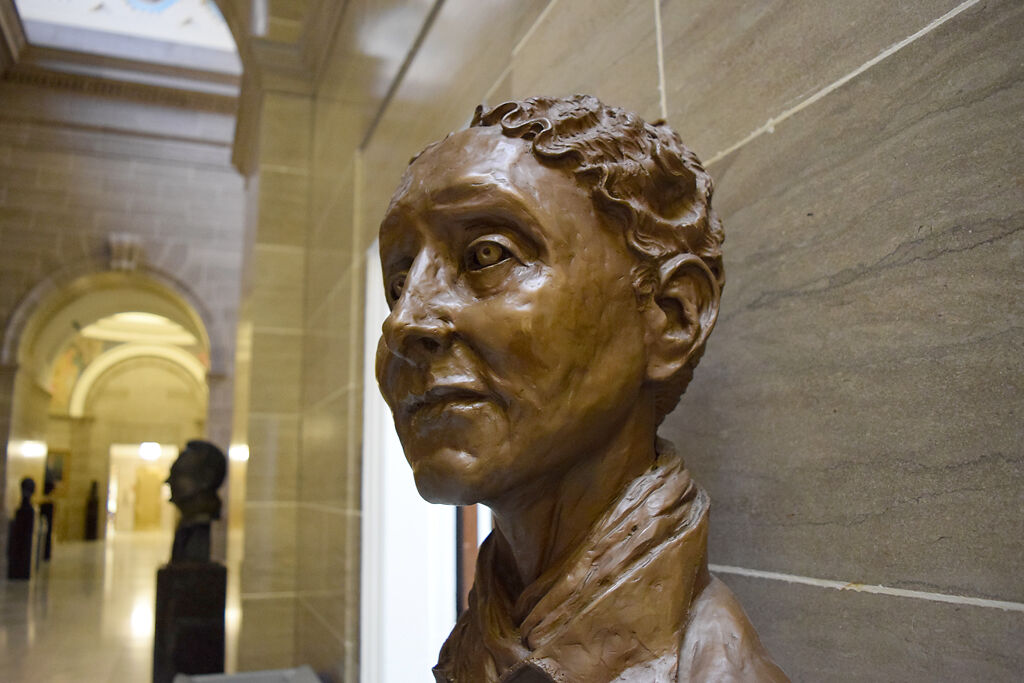 {span}A bronze bust of 19{/span}{sup}th{/sup}{span} century suffragette Virginia Minor stands in the Hall of Famous Missourians on the third floor of the rotunda at the Missouri State Capitol in Jefferson City. Minor was inducted on Sept. 10, 2014, after a coalition of Missouri women lobbied for her addition.{/span} 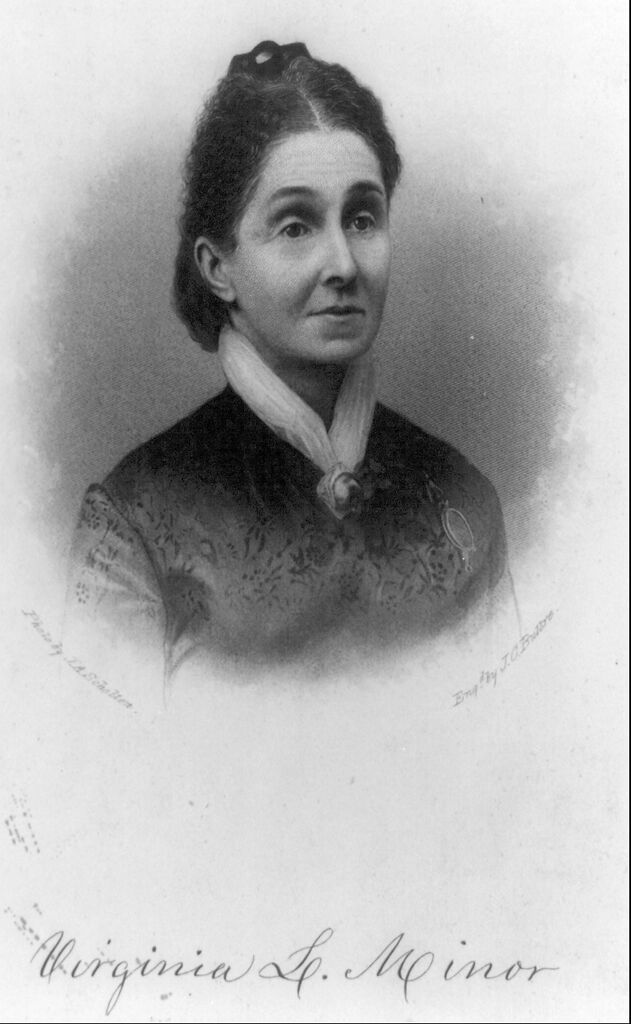 In this file photo, Rush Limbaugh poses with a bust made in his likeness for the Hall of Famous Missourians just outside the House chamber. Limbaugh bust displayed at Missouri Capitol

{span}A bronze bust of 19{/span}{sup}th{/sup}{span} century suffragette Virginia Minor stands in the Hall of Famous Missourians on the third floor of the rotunda at the Missouri State Capitol in Jefferson City. Minor was inducted on Sept. 10, 2014, after a coalition of Missouri women lobbied for her addition.{/span}

State legislators are trying to establish a Rush Limbaugh Day to honor the conservative radio talk-show host, who died Feb. 17.

If the bill passes, it wouldn’t be the first time lawmakers have honored Limbaugh. In 2012, they installed a bust of the controversial pundit in the state Capitol’s Hall of Famous Missourians.

That action incensed a coalition of Missouri women so much that it launched a two-year lobbying effort to install a bust of 19th-century activist Virginia Minor, who battled to give women the right to vote.

The addition of Limbaugh was so controversial that a camera was placed on his bust so that no one would deface it. The usual public ceremony became a secretive one hosted by then-Speaker of the House Steven Tilley — but not for long.

“When we found out, we were furious,” Mary Mosley said.

Mosley was a Columbia branch member of the American Association of University Women and served as a co-leader in the Missouri Women’s Network project of lobbying for another female inductee, who would be the eighth woman, as opposed to the 36 men. Today, there are nine women and 39 men in the Hall of Famous Missourians.

Shirley Breeze, a Ferguson-Florissant branch member of the AAUW and Mosley’s partner in the growing project, also recognized a heightened need for more women in the hall after Limbaugh’s induction.

“We were just so irate that there were only so few women represented and all those men — including Rush Limbaugh,” Breeze said. “So, we just couldn’t keep our mouths shut.”

Mosley and Breeze got to work on rallying as many women as they could to vote for Minor, a 19th-century suffragette, as soon as the speaker of the house announced his plan to let the public give input for the upcoming induction through an online vote. By then, the speaker of house was Tim Jones. Regardless of the vote, he would decide which individual would be chosen.

The Missouri Women’s Network was a necessary and powerful tool in enlisting the help of women across the state to change the number of women from seven to eight. Those involved were the National Organization for Women, AAUW and the Business and Professional Women of Missouri — which is now Business Women of Missouri.

During the two years leading up to the Sept. 10, 2014, induction day, Mosley and Breeze were at the Missouri State Capitol at least once a week to talk to staff, attend meetings and continue in their lobbyist roles.

“If you want to know what’s really going on in the state of politics you need to be in the Capitol,” said Mosley, who has stayed involved in the National Organization for Women and now resides in Idaho as the president-elect of the Boise branch of the AAUW.

MU History Department chair and professor Catherine Rymph stressed how important it became in the 1970s for professional historians to get the accomplishments of women recognized. According to Rymph, very few women would have been found or acknowledged in halls of fame or museums 50 years ago.

The Missouri women of AAUW and beyond noticed a similar sentiment still established in the Hall of Famous Missourians. And they were astounded that a figure as prominent in women’s rights — especially at the national level in U.S. politics — as Virginia Minor wasn’t already included.

“It’s not the Missouri part of her story that’s important,” Rymph said. “It’s that she tried to vote and they didn’t let her, and she took it to the Supreme Court.”

Mosley and Breeze also took their plea for Virginia Minor’s recognition farther when they created a “1,000 Strong” campaign to raise money for the bust sculpture. Virginia Minor hadn’t won the most votes, but the speaker of the house still decided to induct her. He did not, however, decide to host the annual golf tournament that typically funds the inductee’s bust.

Women across the state got behind the idea of 1,000 Missouri women donating $10 each. The coalition raised all $10,000 and enough extra to cover the costs of the base and catered reception on induction day — two additional fees they were also unaware of.

“There was so much enthusiasm in the women’s community,” Mosley said. “And women came out of the woodwork.”

Because so many women across the state were involved, Mosley wanted to include as many as she could on the day of the induction. Pat Shores, a Ballwin-Chesterfield branch member of the AAUW at the time, took a bus from St. Louis with other women to attend the event.

“We’re not a frivolous group,” Shores said. “We do things that make a difference for Missouri families.”

The bill to honor Limbaugh every year on Jan 12, his birthday, was heard earlier this month in a Senate committee, but no vote was taken.

It would not create a new state holiday, and schools, government offices and banks would remain open.

It would, however, encourage “appropriate events and activities to remember the life of the famous Missourian and groundbreaking radio host.”