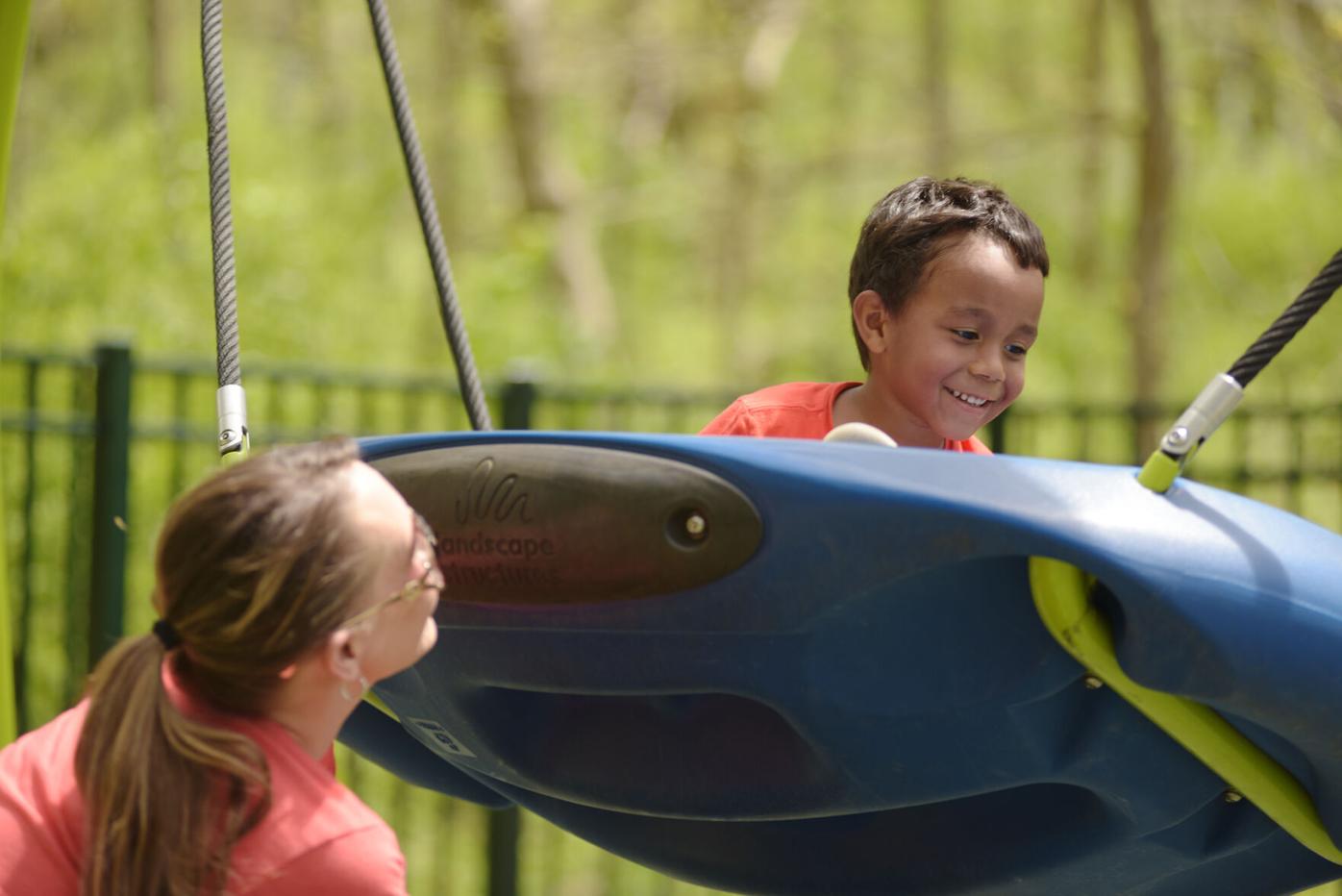 Brandie Coxson pushes her son Lukas on the swing at Woodridge Park on May 1 in Columbia. Coxson is waiting on overdue child support. “Lukas and I won’t need the money when Lukas is an adult. The money is needed now,” Coxson said. 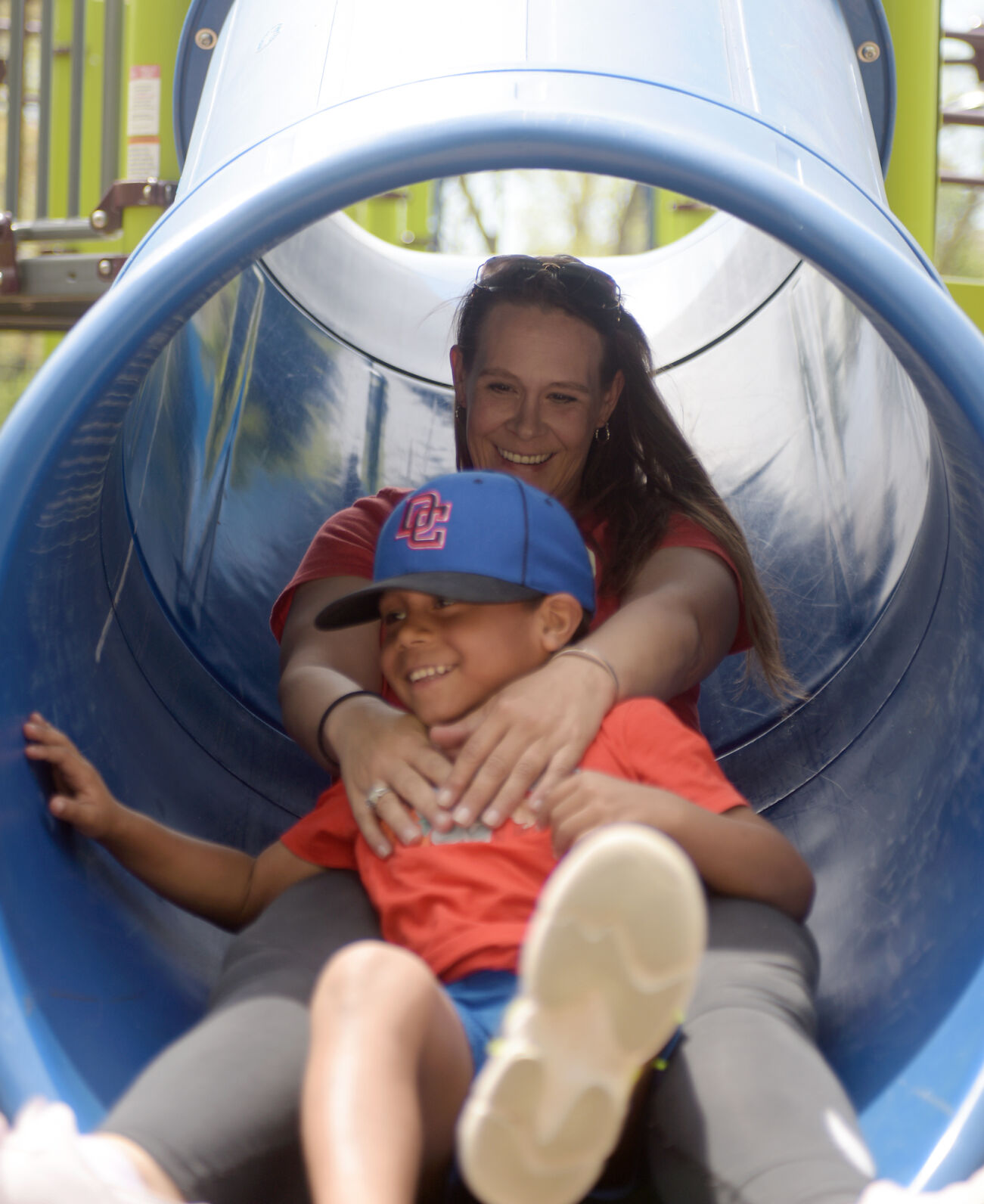 Brandie Coxson and her son Lukas laugh down the slide at Woodridge Park on May 1 in Columbia. In the U.S., past-due child support totaled $114.6 billion in 2017, according to the Office of Child Support Enforcement. 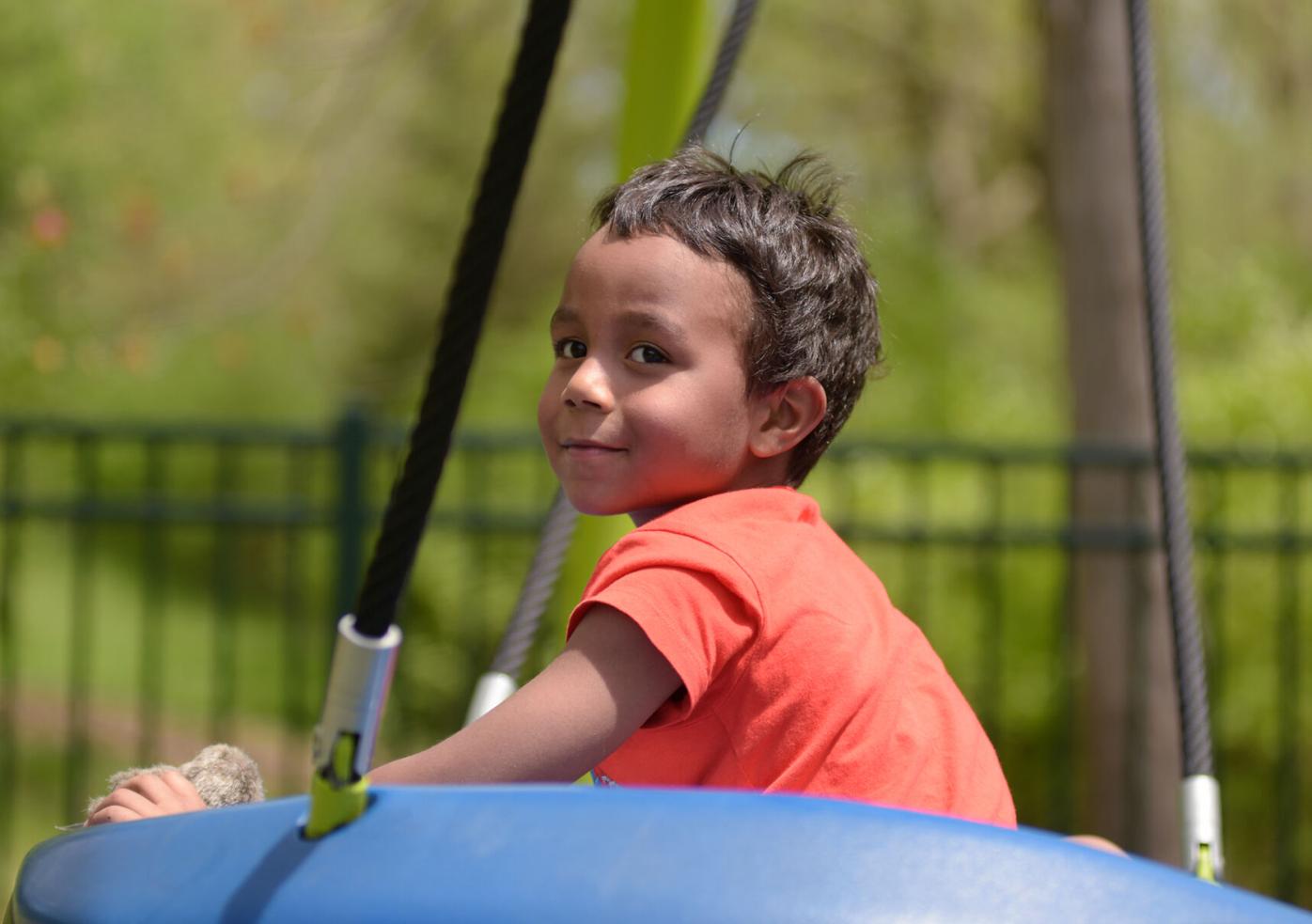 Lukas Coxson looks at his mom at Woodridge Park on May 1 in Columbia. “Everybody just says, ‘Well, we’re waiting,’” Brandie Coxson said. “But the only person out of everybody who’s waiting that it affects is my 5-year-old.” 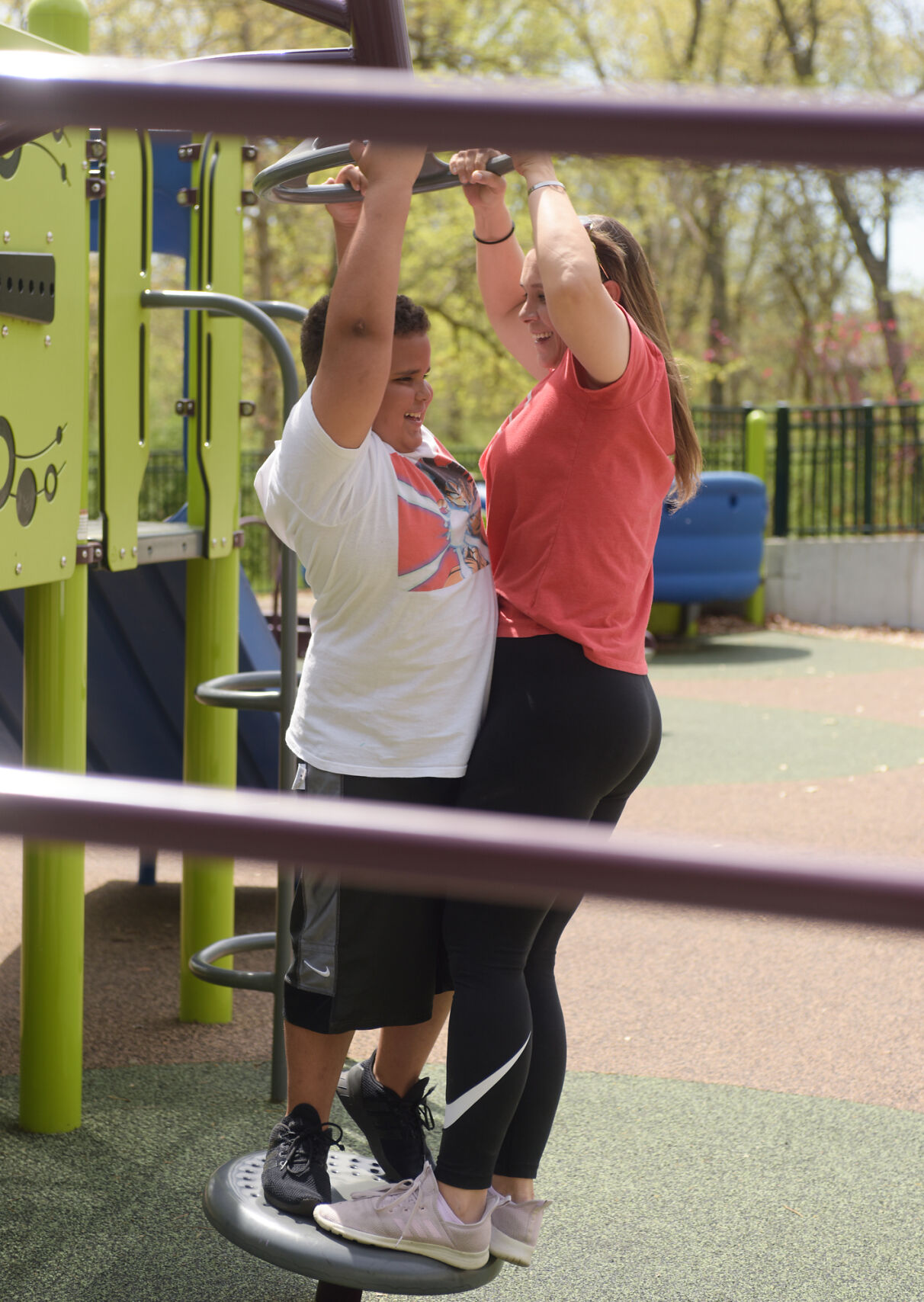 Brandie Coxson and her son Eric play at Woodridge Park on May 1 in Columbia. Coxson has two sons, Eric and Lukas.

Brandie Coxson pushes her son Lukas on the swing at Woodridge Park on May 1 in Columbia. Coxson is waiting on overdue child support. “Lukas and I won’t need the money when Lukas is an adult. The money is needed now,” Coxson said.

Brandie Coxson and her son Lukas laugh down the slide at Woodridge Park on May 1 in Columbia. In the U.S., past-due child support totaled $114.6 billion in 2017, according to the Office of Child Support Enforcement.

Lukas Coxson looks at his mom at Woodridge Park on May 1 in Columbia. “Everybody just says, ‘Well, we’re waiting,’” Brandie Coxson said. “But the only person out of everybody who’s waiting that it affects is my 5-year-old.”

Brandie Coxson and her son Eric play at Woodridge Park on May 1 in Columbia. Coxson has two sons, Eric and Lukas.

This is the first of two parts about Missouri’s dysfunctional child support system and its impact on parents and children.

Brandie Coxson thought her ex-partner was excited for the birth of their son. The couple had been together for about four years, and though the pregnancy wasn’t planned, she said he had been a good father to her other kids.

In the end, Coxson gave birth to Lukas alone.

The experience was traumatic. After that, Coxson knew her ex would likely never initiate a relationship with their son. She filed for child support in Boone County as soon as she could.

After years of dealing with the system, she’s had calls to the department dropped, waited on hold for countless hours and left requests with her caseworker that have gone months with no response, she says. She’s had to explain her case over and over to whomever answered the phone. Her ex has been charged with felony nonsupport, and she’s waited years for a verdict while still not receiving the $200 a month she’s supposed to get.

Interviews with 10 parents who are owed or owe child support present a picture of dysfunction in a system that is a presence in the lives of many. In Missouri, there are about 306,000 child support accounts. Each represents two parents and the children they had together. At the beginning of this year, nearly 190,000 of those cases had past-due payments. That’s 62%.

The goal of the child support network is to try and get payments to custodial parents, the parent who has custody of the child, so they are better able to care for their kids. The system is not always achieving the desired result.

Coxson has grown increasingly frustrated because, in her mind, there’s a time limit to her need. Her son is 5 years old, and they need the money now more than ever.

“Lukas and I won’t need the money when Lukas is an adult. The money is needed now,” Coxson said. “I’m living in an efficiency hotel room to be able to afford just the common life things. That’s just the truth.”

In their one-bedroom room, Coxson said she’s moved in all the belongings of her two sons that will fit and put most of her belongings in storage. Toys are stacked up in bins, superhero capes lay draped across a lamp, and basketball-goal hampers hang from the closet door.

Coxson now works full time as a home health nurse but for a while couldn’t afford day care and had to work when her mother or sister could look after the boys. While $200 a month might not seem like a lot, it goes a long way when money is tight.

“It could pay for one week of day care and then an extracurricular activity for the month. It could pay for a new pair of shoes ... . I could buy $200 worth of groceries,” Coxson said. “I have already downsized my life because even on a nurse’s salary, I can’t afford … everything.”

Many single parents struggle to make things work with less money. A little over one-fourth of single parents live in poverty, according to 2018 Pew Research.

The growing dollar signs attached to child support highlight the importance of collecting money that struggling parents need, but it’s not the only issue in the child support system.

While juggling the kids and her job, Coxson has to worry about when child support will answer the phone. Her No. 1 complaint with the child support system has always been reaching someone who knows about her case. She’s been told there is a child support worker dedicated to her case but has never spoken to that person.

“I’d grade them zero out of 10 stars. You can never get ahold of anybody; you have to call an 800 number and sit on hold,” Coxson said. “You have no contact with your worker; you don’t know anything about what’s going on.”

For example, she said, she put in a request that her worker answer a question months ago and still hasn’t heard from them. Calls to the child support information line to speak to a representative are often dropped or never answered at all.

John Ginwright, the director of child support enforcement in Missouri, said the department had outsourced its call center but has recently had to ask regular staff to answer calls, so long wait times and dropped calls should end soon.

Parents said they’ve had trouble contacting the department for years.

This lack of contact and transparency makes Coxson feel like just a number on a sheet of paper at the bottom of a large pile. She feels she must keep calling to ensure someone is paying attention to her case out of the hundreds each case worker has to deal with.

“The problem is that when you’re a custodial parent, your case doesn’t get worked unless you work it, so you are the one who is doing all of the footwork for everything,” Coxson said. “You’re waiting the 30 days out for the employer not to send the payment, then you’re calling the caseworker back and saying, ‘It’s been over 30 days; what are you going to do now?’”

This kind of case load is common, according to former child support enforcement worker Stephanie Wilkison. She worked as an enforcement officer specifically for military families, so she has experience handling cases in every state in the country.

Wilkison said Missouri is one of the slower states and, like most states, handles cases in a way that creates confusing bureaucracy.

“Every part of your case is kind of handled by a different person,” Wilkison said. “They don’t know your full case. They don’t know the whole history of it, so they’re a little slower to help people.”

In the years since Coxson’s ex was first charged with felony nonsupport in 2018, most of the time on the case has been spent on the public defenders’ waitlist.

In March, Coxson’s ex was more than $5,000 behind in child support payments. A felony nonsupport case can be brought when the noncustodial parent is either more than $2,500 behind in payments or hasn’t made a payment in more than a year.

As of this month, Coxson’s ex had made eight payments in the last 13 months, amounting to about $1,200. Two of those payments were intercepted from his tax return and stimulus check. That’s less than half of what the court ordered him to pay.

But the most successful ways to help custodial parents aren’t the ones the child support department or the justice system have been using.

For Coxson, she doesn’t care how her case is decided, as long as she can care for her son.

“Everybody just says, ‘Well, we’re waiting,’” Coxson said. “But the only person out of everybody who’s waiting that it affects is my 5-year-old.”