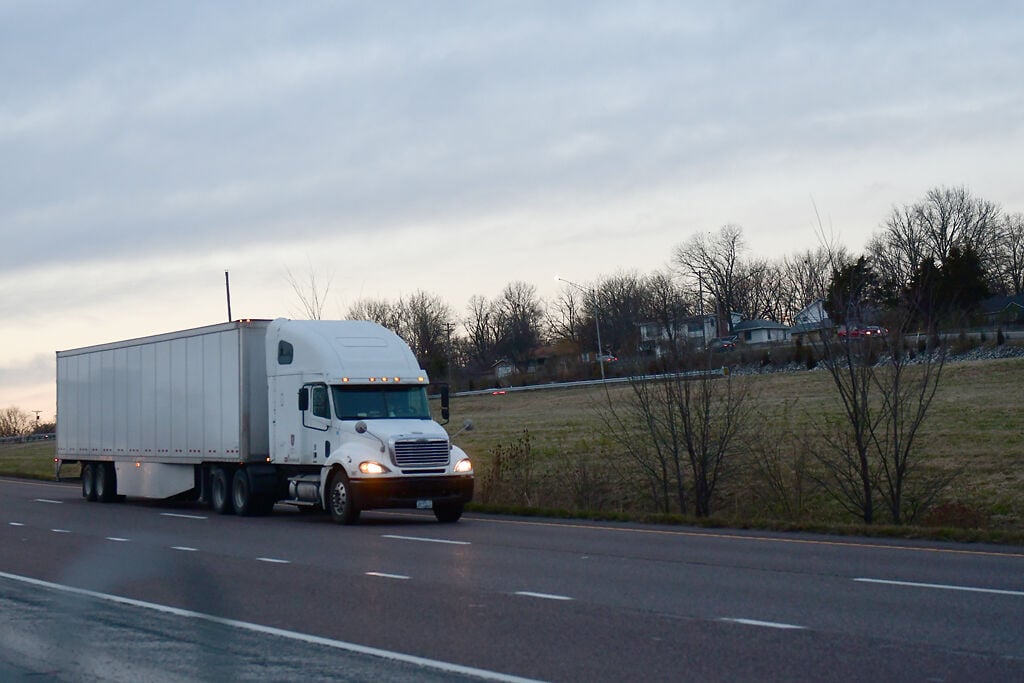 A semi-truck drives east on I-70 toward St. Louis in early December. Missouri has 1,380 miles of interstate highways, which gives it a No. 5 ranking nationally. 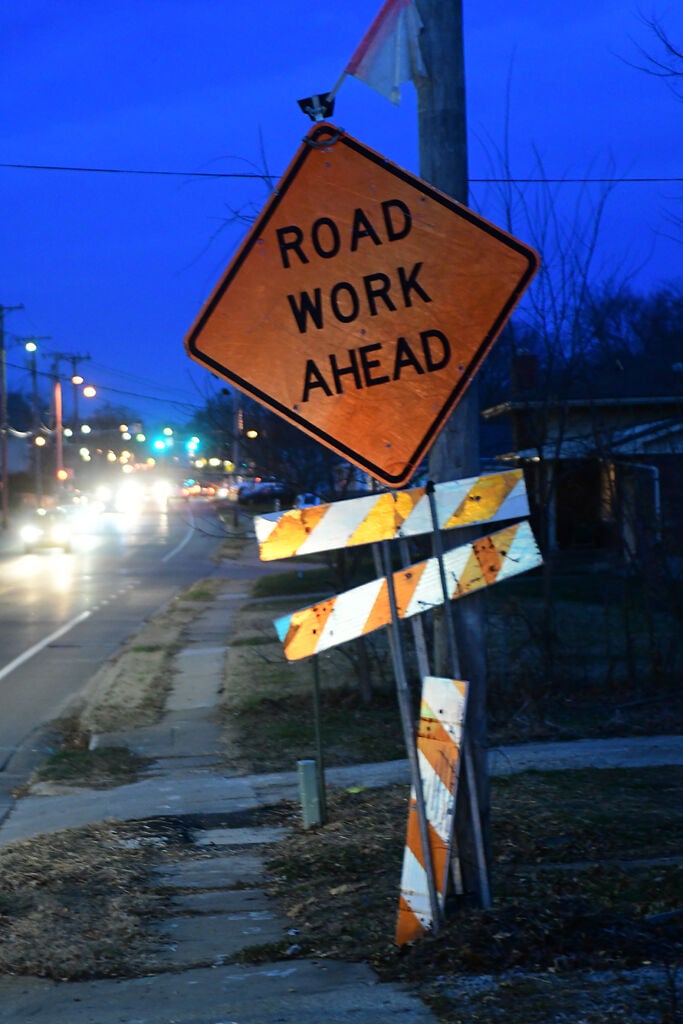 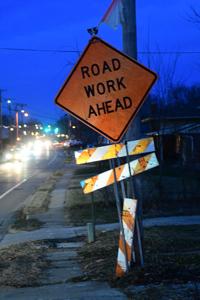 A road construction sign warns drivers to slow down due to road work on Garth Avenue in Columbia. According to a study done in February by AutoWise.com, Missouri ranked first in the nation in complaints about potholes.

As the COVID-19 pandemic shut down businesses and limited demand for travel during the spring and summer, the Missouri Department of Transportation faced a potentially dire loss of revenue.

Funds from MoDOT’s three main sources of revenue — motor fuel taxes, vehicle sales taxes, and license and registration fees — were all down.

The motor fuel tax, which can account for upwards of 45% of total state transportation revenue, dropped significantly because of the roughly 50% reduction in traffic statewide that lasted for months, MoDOT Director Patrick McKenna said.

Because of the way the department operates, much of its construction work is locked into multi-year contracts. While halting construction projects may alleviate costs in the short term, it would only increase costs in the long term.

“It doesn’t make a lot of sense to stop things that are going on if you can avoid it because that could add 20 to 25% to the cost of the overall project work, and, of course, when you stop the work, it’s not getting done,” McKenna said.

All this left MODOT in an extremely precarious position at the beginning of the summer. Funding was dropping, and the department lacked significant flexibility to make changes to its spending.

Priority No. 1, according to McKenna, was to preserve projects that had already begun or were already under contract. This left two main areas where MoDOT could reduce its spending: employees and investment in, or commitment to, future projects.

The department instituted a hiring slowdown and a furlough program called “shared work.” 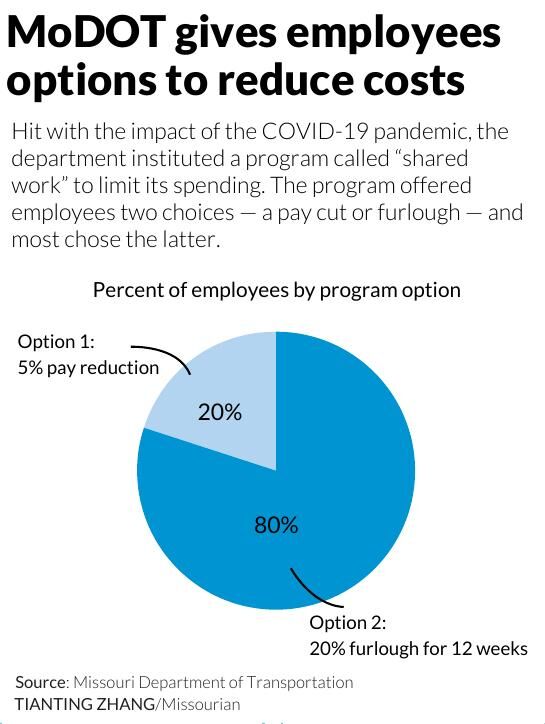 “About 80% of our team took a 20% furlough for 12 weeks, and the other 20% of the team took a 5% pay reduction,” McKenna said. “We were able to stop the pay reduction after four weeks because, as we got into July and into August, we had some stabilization of traffic volume and revenue.”

Overall, the furlough program saved about $14 million. The hiring slowdown saved several million dollars as well, McKenna said. In addition, the department pushed back or canceled planned purchases of equipment and materials, which saved almost $20 million.

Through these actions, McKenna hopes MoDOT has been able to weather the storm of revenue loss. He said the savings managed to cover the $40 million that was initially lost.

The department is again advertising contracts for the construction projects that were delayed — about 300 contracts worth $60 million.

“Our efforts have proven out to be, you know, kind of reasonable and balanced,” McKenna said. “We’ve advertised virtually all of the construction projects that were deferred, and so we’re somewhat back on track.”

Despite the revenue shortfalls and other impacts of the pandemic, MoDOT is on track to have its best year of construction in a decade, McKenna said. In fact, by September the department was about $150 million ahead of the 2019 numbers from that point in the year.

“We’re feeling a lot better today than we were six months ago, I can tell you that much, even though we’re still in the midst of a pandemic and things could change,” McKenna said.

While COVID-19 has not significantly delayed MoDOT’s plans, McKenna said improving those numbers is not currently among them.

“Frankly, we’re not funded to improve those conditions,” McKenna said. “We’re barely holding the system together as it stands right now. We do not have funding for system improvement. We’re on an asset management and preservation basis where we’re getting a little further behind every year.”

McKenna attributed this inability to improve road conditions to outside forces, such as inflation and increased fuel economy of cars, and he suggested that legislators had not properly responded to those forces.

“The fact that the primary revenue source, the state gas tax, hasn’t been raised since 1996, it should come as no surprise to anyone that we can only buy about half the construction equipment and materials we could buy in 1996,” he said.

At 17.24 cents per gallon, Missouri has the second lowest fuel tax in the nation, outdone only by Alaska, according to the Tax Foundation.

Tom Crawford, president and CEO of the Missouri Trucking Association, said truckers tend to notice which states fund road upkeep and which ones do not.

“MoDOT does a pretty good job with the limited resources they have of trying to keep our roads in a safe condition, but there are some things they can’t keep up on and aren’t able to keep up on as frequently when they’re running short of funding,” Crawford said. 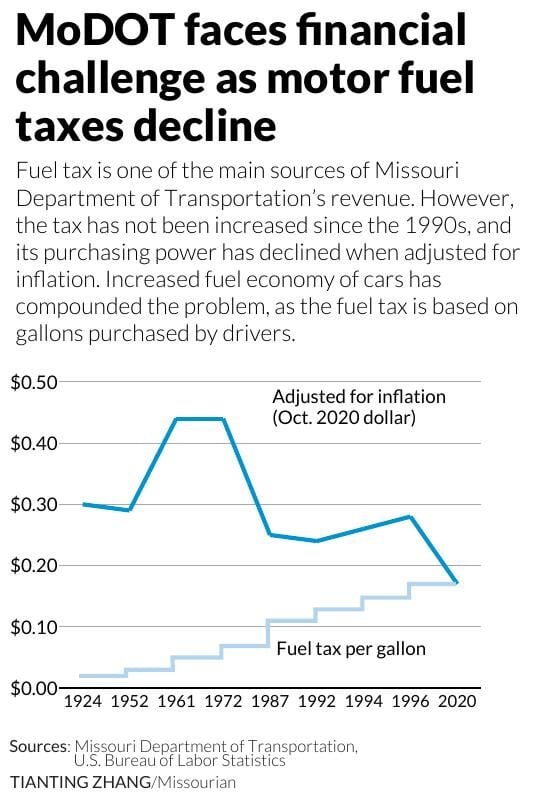 He said the trucking industry would be supportive of new funding for the department so the necessary work of road upkeep and improvement could be done.

Funding shortfalls are especially concerning during this time of year when the weather changes, Crawford said.

“We’re starting to enter that time of year where the temperatures change and you get freezing and thawing,” he said. “And so you see some things popping up this time of year. They may not be able to respond to those quite as quick.”

This steady deterioration of Missouri’s roads doesn’t just create a less comfortable ride for truckers and travelers, it can create significant safety hazards.

Chunks of concrete, rubber or asphalt can come loose and be kicked up by tires, risking them hitting other vehicles, Crawford said.

“They get thrown by tires, either commercial tires or just regular tires, bouncing around hitting windshields or damaging vehicles,” he said. “I mean, that’s a safety issue and can cause loss of control.”

Even as budget shortfalls from COVID-19 are not as dire as once feared, he said the lack of funding still puts MoDOT in a position of having a hard time fixing those kinds of issues.

“Being able to address those proactively is probably not something they’re able to do as well as they have been in the past,” Crawford said.

The poor state of Missouri’s roads can also have a serious impact on the movement of goods by truckers. According to 2017 data from the Bureau of Transportation Statistics, more than 70% of all freight in America was transported by trucks driving on roads.