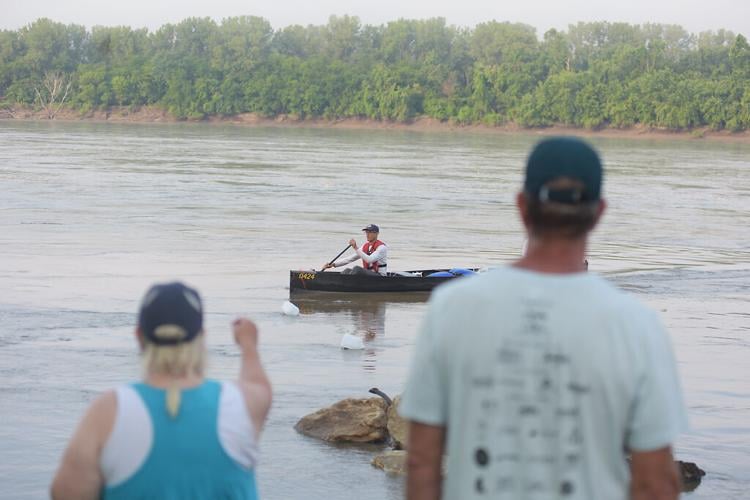 Edoh Amiran paddles to shore during The 16th Annual Missouri American Water MR340 on Wednesday at Cooper’s Landing in Columbia. Amiran is participating in the Men’s Tandem Division with his partner, Liam Price. 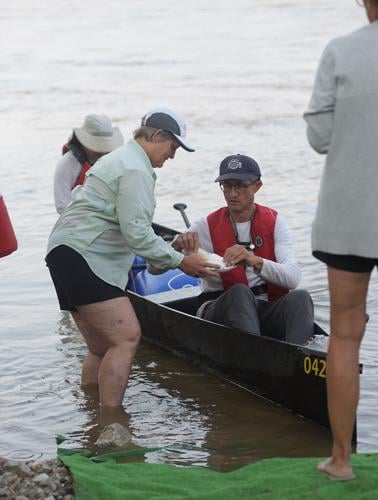 Veronica Wisniewski hands her husband, Amiran, a breakfast burrito while taking a break during the 16th Annual Missouri American Water MR340 on Wednesday at Coopers Landing in Columbia. Amiran and his wife traveled from Lynden, WA to compete. 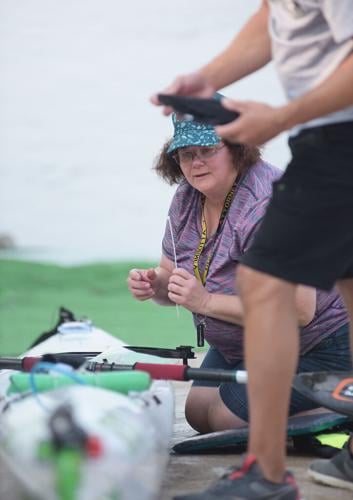 Shelia Hansel, team captain to kayaker David Carlson, works on the boat while Carlson rests during the 16th Annual Missouri American Water MR340 on Wednesday at Coopers Landing in Columbia. “His favorite snack during the race—Pringles!” she exclaimed. 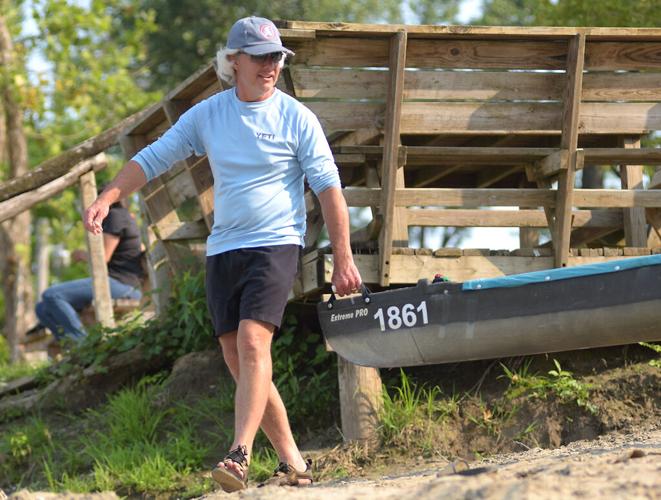 Mike Basler helps to turn his son’s kayak around during the 16th Annual Missouri American Water MR340 on Wednesday, at Cooper’s Landing in Columbia. His son, Jack, is competing for his second time in the Men’s Solo Division. 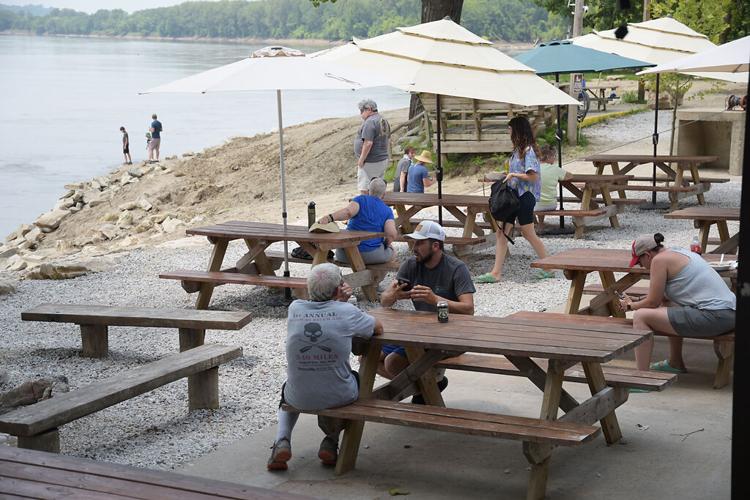 Spectators look out onto the Missouri River during the 16th Annual Missouri American Water MR340 on Wednesday at Coopers Landing in Columbia. The MR30 is the world’s longest non-stop river race. 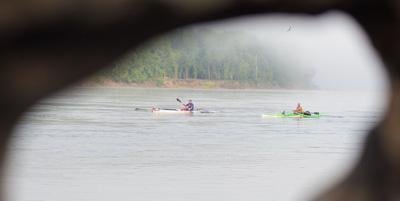 "Everything hurts, man," said Michael Lauterbach as he stepped out of his canoe Wednesday at Cooper's Landing, a break stop on the 16th annual Missouri American Water MR340.

Lauterbach had stopped at Cooper's Landing around noon en route from Kansas City to St. Charles in the “world’s longest nonstop river race.”

A total of 522 paddlers are making the 340-mile trip this week in kayaks, canoes, outriggers, paddleboards and other watercraft.

They started at 7 a.m. Tuesday and have 85 hours to complete the endurance race. Last year, only two-thirds of boats were able to finish in the time allowed.

Cooper's Landing is 197.5 miles downriver from Kansas City, close to the halfway point in the race.

On Wednesday, the stop was littered with recreational vehicles and tents set up by paddlers' support crews as they prepared to supply their racers with food and water. Besides support crews, MR340 volunteers and spectators milled around the area helping out as needed.

Because solo paddlers and teams were taking breaks at Cooper's Landing, a stream of boats steadily moved past the campground on the river bank most of the day.

Paddlers look forward to the stops as a chance to refill supplies, eat and stretch their legs. Many have been on the river since 7 a.m. Tuesday.

"It's a chance to normalize your body," said Michael Lauterbach's brother Nathan about the Cooper's Landing stop.

"We've been in the boat for over 24 hours now and everything sort of numbs out. So this is a time for us to move around," Nathan Lauterbach said.

The brothers are competing in the Men's Tandem Division. Nathan seemed more upbeat and positive about the trip so far, while his brother was busy bandaging the blisters on his hands. They conferred with members of their support crew about equipment they needed at the next stop in Jefferson City.

"I think we're making good time. From here on out, I think it gets easier," said Nathan. "The daytime is hard because it's hot and the sun beats down on you. There's a little headwind on the river that's nice because it cools you down."

"The night battle is where it's at," Michael chimed in. "The day's are sweaty but at night, when you hear coyotes howling along the river, that's really special."

After a couple more minutes of rest, the Lauterbachs got back into their canoe and pushed off.

They were in fifth place Wednesday in the men's tandem division. Readers can track their progress alongside other paddlers on the Race Owl website.

'The fever for kayaking': 12th annual Race to the Dome kicks off despite rain

Lightning and hypothermia were among the risks for the race, which benefits Missouri River Relief.