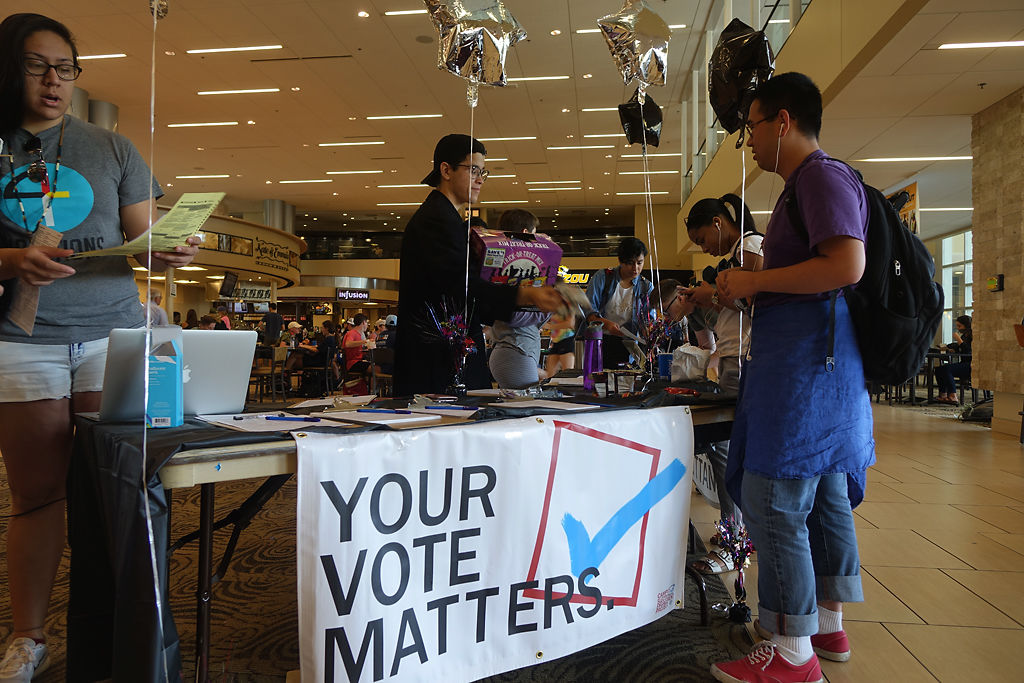 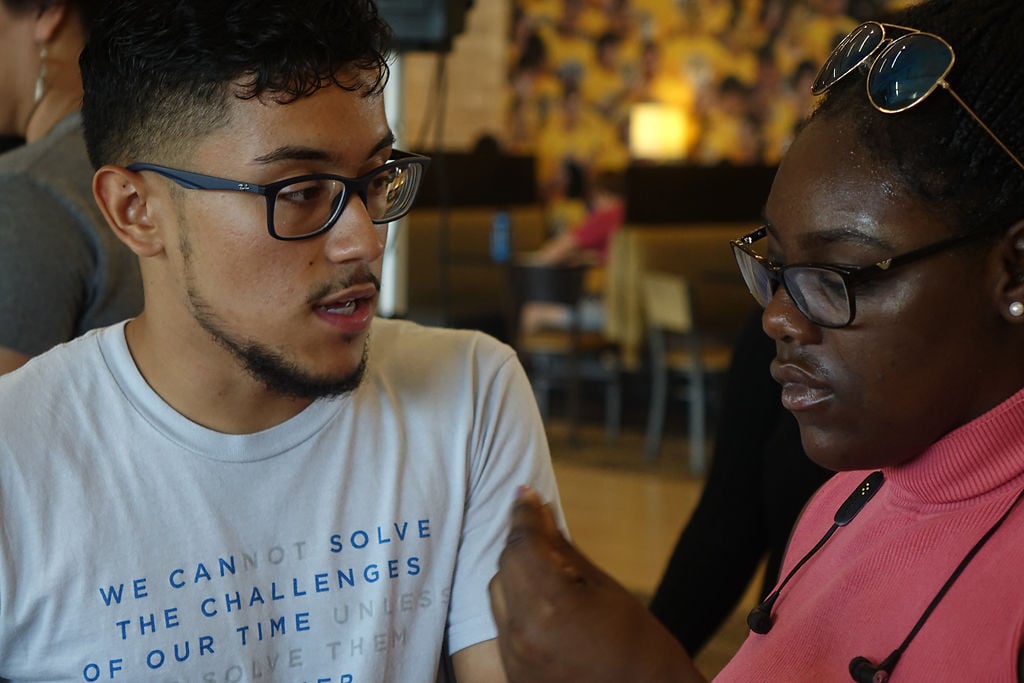 Mizzou Association of Latin American Students President Daniel Serres, left, briefs Legion of Black Collegians and Missouri Students Association Senator Beatrice Nkansah, right, on Monday regarding running the voter registration drive called When We All Vote in the MU Student Center. The event was a part of a week-long collaboration between ALAS, LBC and the Mizzou Asian American Association to encourage voting.

Mizzou Association of Latin American Students President Daniel Serres, left, briefs Legion of Black Collegians and Missouri Students Association Senator Beatrice Nkansah, right, on Monday regarding running the voter registration drive called When We All Vote in the MU Student Center. The event was a part of a week-long collaboration between ALAS, LBC and the Mizzou Asian American Association to encourage voting.

With Missouri’s voter registration deadline looming, the When We All Vote pop-up on Monday launched a week-long effort to encourage participation and promote awareness of what will be on the November ballot.

“We’re taking it a step further than just registering people and answering questions,” said Daniel Serres, president of the Mizzou Association of Latin American Students. “We’re also starting conversations in our own communities about why it’s important to vote so that, leading up to the midterm elections, people are civically engaged and are educated about the things that are on the ballot this year.”

The event — a collaboration between ALAS, the Legion of Black Collegians and MU’s Asian American Association — was part of the When We All Vote nationwide initiative.

Serres previously interned for the Obama Foundation Community Leadership Corps and saw how interested young people are in fixing issues in their community. Seeing that students in his community back at MU had questions about the voting process, Serres felt it was a good idea to start a When We All Vote similar initiative here.

“Showing a united front across campus,” Serres said, “and just literally having conversations with people about what they care about and how a vote can affect, that is why we wanted to do this initiative this year.”

About 50 people registered through the pop-up, and the event organizers helped answer many questions about absentee voting in different states, Serres said. He said ALAS, LBC and AAA will be posting videos to their social media accounts throughout the week in which student community leaders explain their thoughts on why people should vote.

Beatrice Nkansah, a senator for LBC and the Missouri Students Association who helped run the pop-up, said she sees When We All Vote as an opportunity to help students like her.

“I just turned 18 a couple months ago, and so I had no idea how to vote,” Nkansah said. “I’d like to just go ahead and just push forth efforts for those who don’t know how to vote so they can get registered.”

This is exactly what Serres hopes student organizations can accomplish with efforts like When We All Vote in the long run.

“There’s just a lot of questions that college students don’t necessarily have the answers to,” Serres said. “Putting together some type of website or resource that we can hand out to students about absentee ballot voting or voting here in Boone County is ... something that we’re all gonna definitely work on in the future.”

For Nkansah, the ultimate goal of the When We All Vote campaign is twofold.

This will be Heredia’s first time voting. Despite being motivated to express his beliefs through his vote, Heredia said there’s one thing he isn’t too excited about.

“Eh…,” Heredia said. “I just don’t want to wait in line. That’s the only thing I’m not looking forward to.”