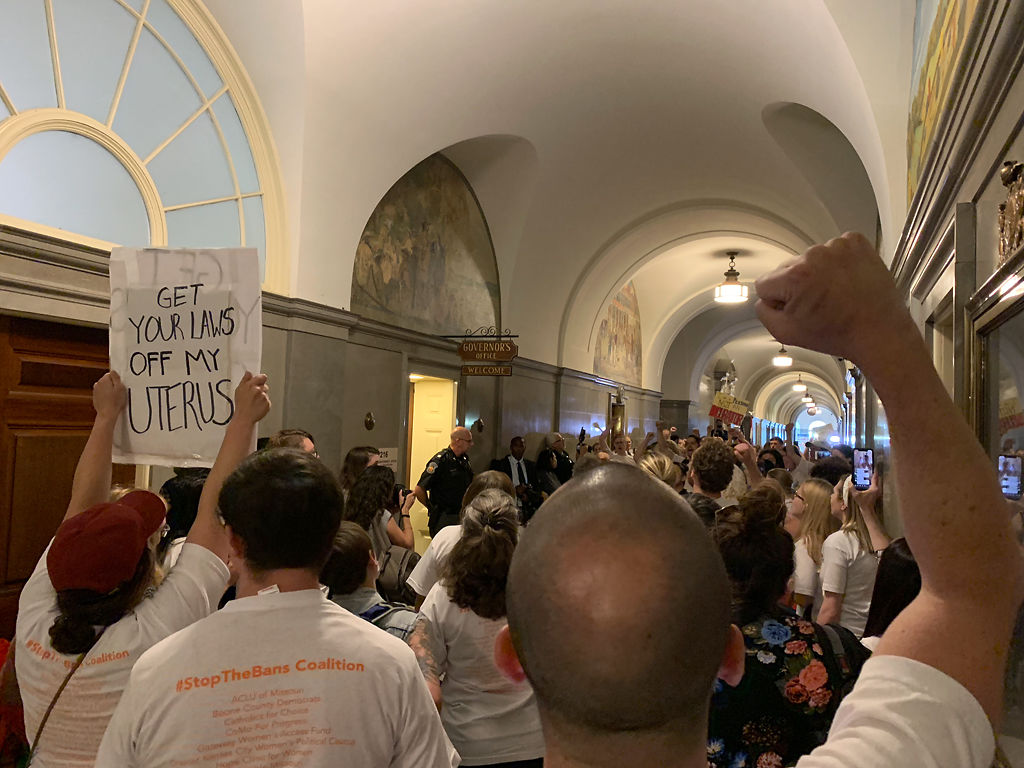 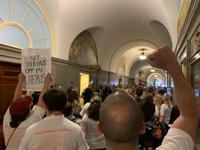 Protesters gather outside the governor’s office chanting “veto" Friday at the Missouri State Capitol. After House Bill 126 passed the chamber 110-44, it was sent to Gov. Mike Parson’s desk. 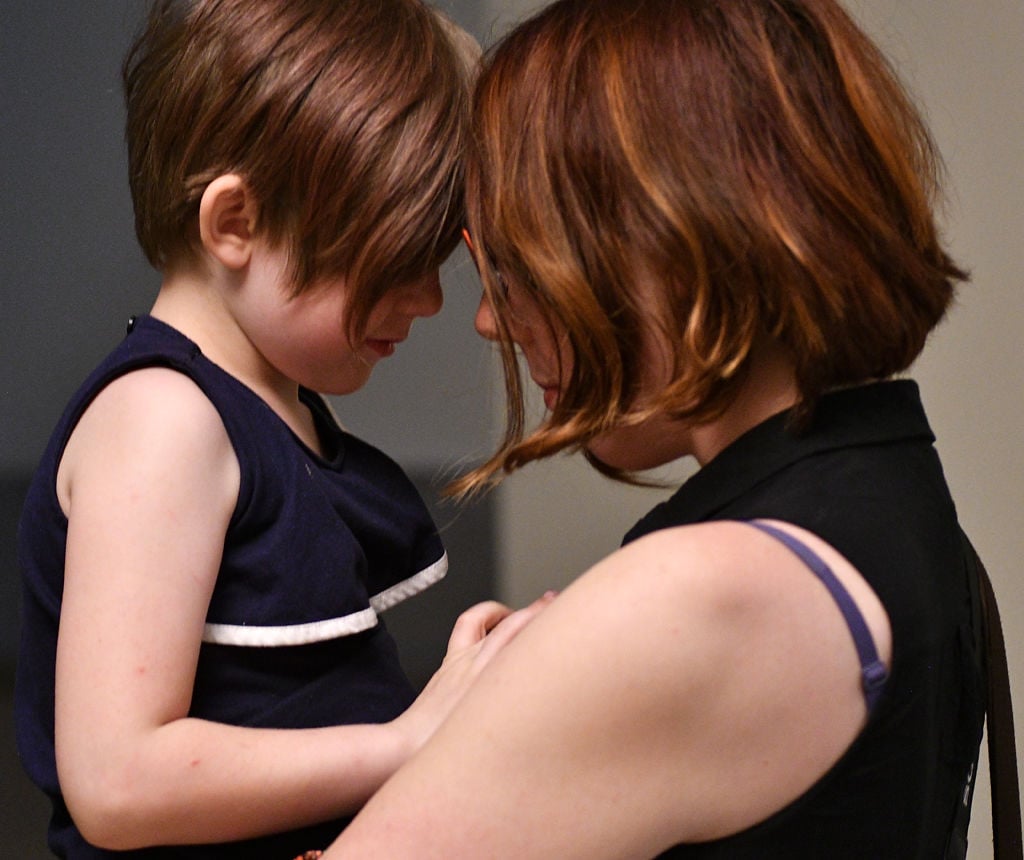 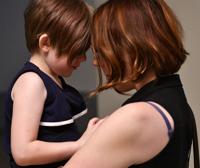 Charlotte Monroe, 5, and her mother, Renee Brochu, embrace Friday in the Missouri State Capitol after protests over an abortion bill in Jefferson City. "I brought my daughter to show her I was fighting for her future," Brochu said. 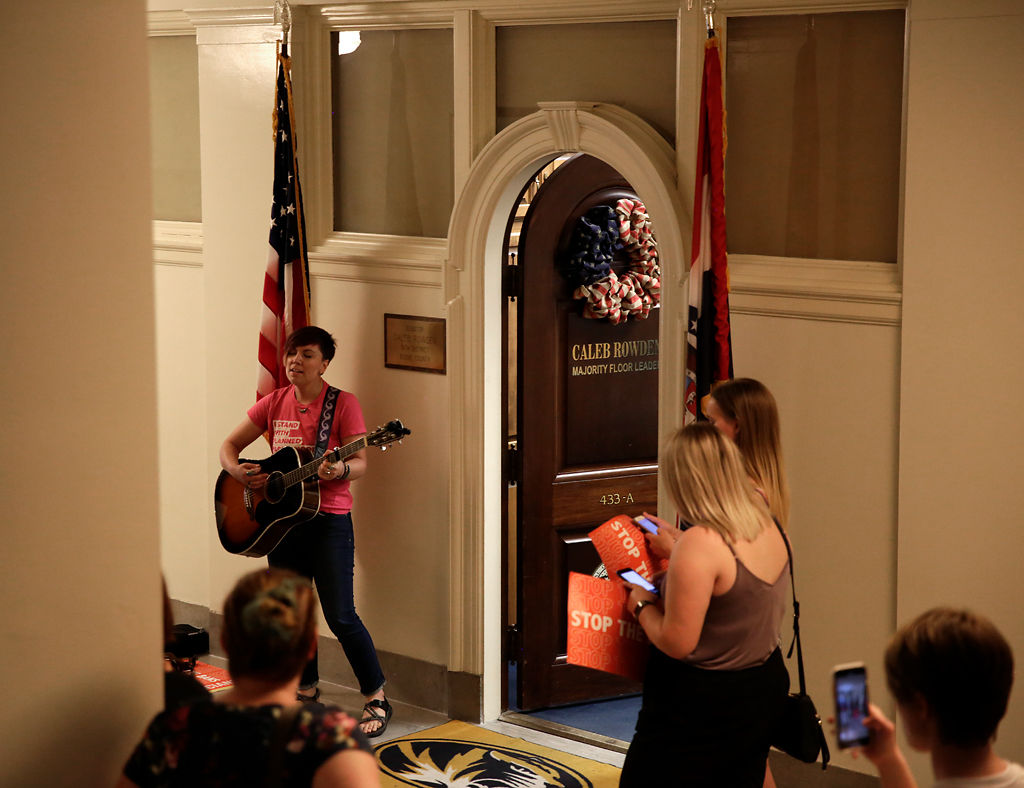 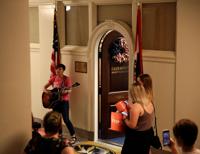 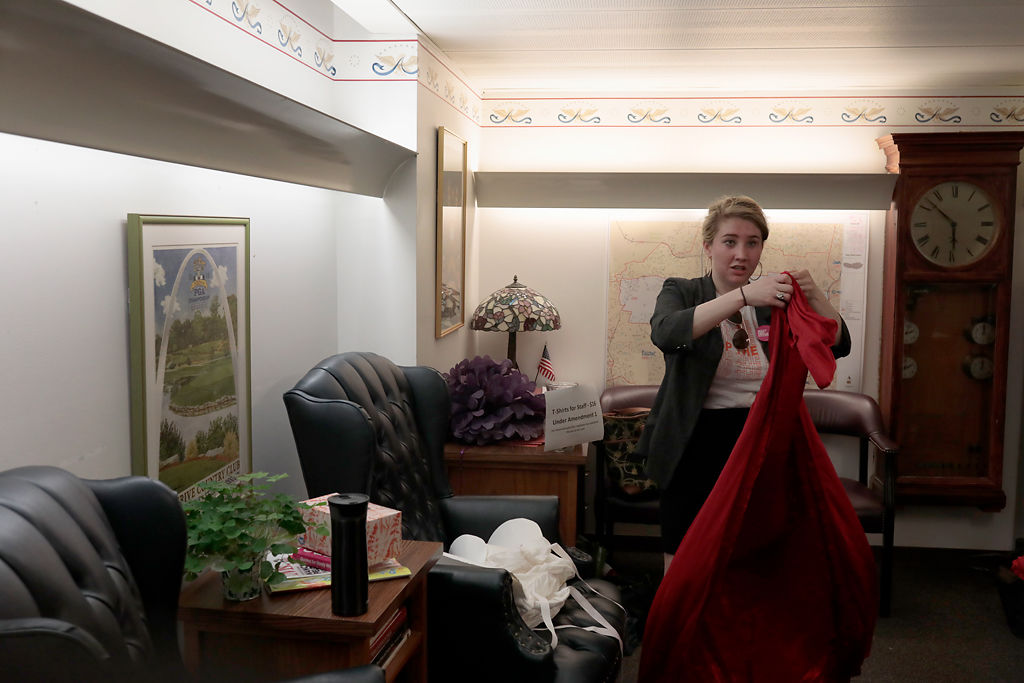 Cortney Bouse folds up her "Handmaid's Tale" costume in the Missouri State Capitol after a protest of the passage of abortion legislation in Jefferson City on Friday. 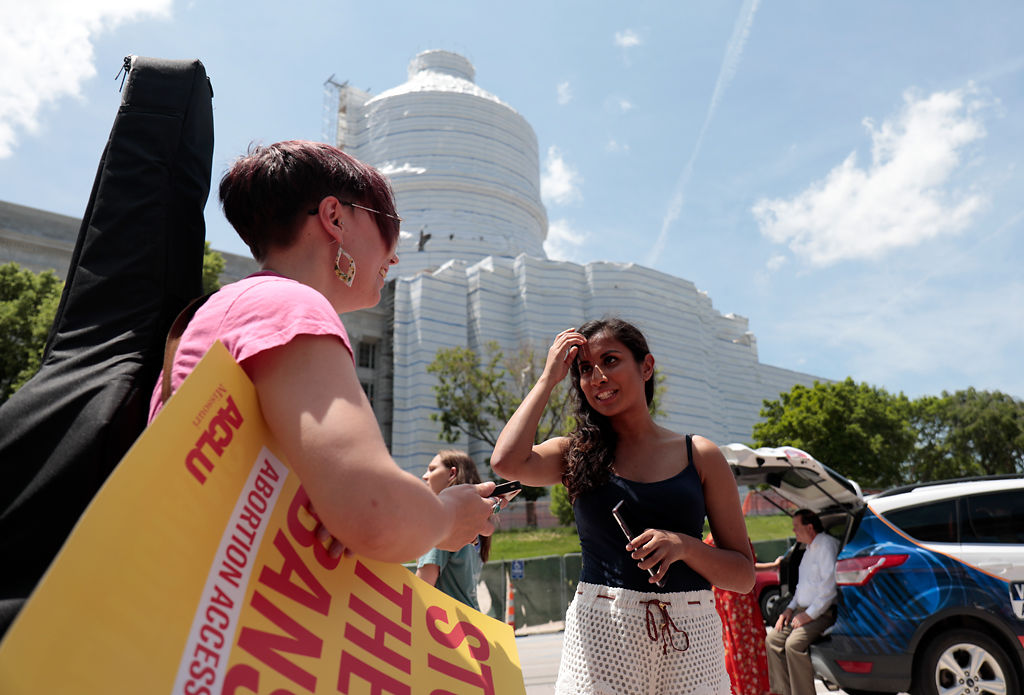 Violet Vonder Haar, left, and Najeebah Hussein talk at a protest after the passage of abortion legislation at the Missouri State Capitol in Jefferson City on Friday. Vonder Haar is a musician in Columbia, and Hussein is an MU alum taking a gap year before law school.

Protesters gather outside the governor’s office chanting “veto" Friday at the Missouri State Capitol. After House Bill 126 passed the chamber 110-44, it was sent to Gov. Mike Parson’s desk.

Charlotte Monroe, 5, and her mother, Renee Brochu, embrace Friday in the Missouri State Capitol after protests over an abortion bill in Jefferson City. "I brought my daughter to show her I was fighting for her future," Brochu said.

Cortney Bouse folds up her "Handmaid's Tale" costume in the Missouri State Capitol after a protest of the passage of abortion legislation in Jefferson City on Friday.

Violet Vonder Haar, left, and Najeebah Hussein talk at a protest after the passage of abortion legislation at the Missouri State Capitol in Jefferson City on Friday. Vonder Haar is a musician in Columbia, and Hussein is an MU alum taking a gap year before law school.

JEFFERSON CITY — Once signed by the governor, Missouri will join the ranks of states like Alabama and Georgia as having one of the most restrictive abortion laws in the country.

The bill would ban abortions at eight weeks with the exception of medical emergencies.

Gov. Mike Parson said he will sign the bill and that he supports all of it, including the lack of any exception for rape or incest.

“I think all life has value, and I’m going to stand up for the people who don’t have a voice,” Parson said.

Despite some changes made to the bill in the Senate, Schroer said the bill's current language is nearly identical to what the House agreed to previously.

"Should a child, a life inside a mother's womb, be killed due to the actions of its parents?" Schroer asked. "Should we kill them merely because it'll be an inconvenience to the parents or unwanted? The simple answer is no."

Rep. Peter Merideth, D-St. Louis, stressed that the bill isn't just an eight-week ban. If Roe v. Wade were overturned, the bill would place an outright ban on abortion in the state from the moment of conception.There would be no exception for the health of the mother or viability of the child, he said.

"If the baby is without organs that are appropriate, you are forced to continue to grow that baby inside of you," Merideth said. "Forced to grow it, potentially killing you, while that baby is suffering, because you are no longer allowed to have an abortion without committing a Class B Felony."

Rep. Crystal Quade, D-Springfield, has previously spoken about her own trauma from abuse. She expressed sadness that, while colleagues have approached her in the hallways to apologize for what happened to her, her story didn't change votes.

"I hope every time you see me, every time the rest of you see me in this hallway, that you think of the story that I told you of my trauma from my abuse," Quade said. "That abuse does not define me, but it is me. I think about it every day. I relive it in my most intimate moments with my very own husband. When you each see me in this hallway, remember what you're doing to little girls who were like me. Because that abuse is me, and you simply don't care."

Many audience members seemed to share these emotions. Several people held their fists high in solidarity as abortion-rights lawmakers spoke. There were several outbursts, including clapping, and eventually, audience members rose to their feet, shouting a chant of "when you lie, people die," which echoed through the House chamber. They were escorted from the room for their actions.

They then headed to the governor's office, their chants echoing throughout the rotunda, as Capitol police watched.

Tears were shed by lawmakers on both sides. Rep. Keri Ingle, D-Lee's Summit, read a letter to her daughter, Hattie.

"I came here to fight for your rights," Ingle read. "Rights your brother will never have threatened. Rights to make the most intimate, intricate decisions anyone can ever make and that no one should be making on your behalf."

"I will teach you how to defend yourself physically, how to hold keys between your knuckles, how to spot someone following you, how to watch your drink, how to lock your door the second you enter your car, how to look for warning signs in men you thought you could trust," she read. "All things I will never have to teach your brother."

Rep. Barry Hovis, R-Cape Girardeau, discussed his experience handling rape cases in his police department. He said the majority of sexual assaults are "date rapes or consensual rapes." He later apologized to media, saying he didn't mean to use the phrase "consensual rape."

Another lawmaker corrected him down.

"To stand on the floor and say, how could you make someone look at a child from rape or incest, and to care for them, I can say how we can do that," Rehder said. "We can do that with the love of God that he puts in our hearts for those children."

She had a child when she was 16, and she lived through poverty and homelessness without much help from her family, she said.

"I do care for those who go through poverty after they are born," Rehder said. "I've lived it."

She said this bill is the right thing to do.

Rep. Mary Elizabeth Coleman, R-Arnold, said that no matter what age you are, she believes your life has value. She raised children while a law student, and believes having children doesn't stop you from achieving your goals.

"It is saying that if I don't have the ability to kill my child, that I as a woman cannot obtain whatever dreams and beliefs I may have," Coleman said. "It's saying my economic opportunities will be limited if I do not pay that price with the blood of my child. It's saying that if I do not listen to the men that stand behind me and say, 'This is inconvenient, let me help you pay for your abortion,' that my life has no value."

Though having previously supported the bill, Rep. Shamed Dogan, R-Ballwin, voted no. He said he's heard from his constituents that the bill goes too far in not giving exceptions for rape or incest.

One of the protestors who came to the Capitol, Claire Sherman, said she started crying after she heard that HB 126 passed.

"It starts here," Michele Mallette-Sherman, Claire Sherman's mother and fellow protester, said. "Where does it end?"

Organizations have already begun giving statements on the bill's passing. NARAL Pro-Choice Missouri, an organization that fights for "reproductive freedom," according to its website, released statements condemning the ban.

The group's president, Leah Boersig, issued a statement against the bill.

“Let’s call this bill exactly what it is: a near total ban on safe, legal abortion," the statement read. "This cruel bill would ban abortion before most people know they are pregnant — with no exceptions in cases of rape, incest or human trafficking. It does absolutely nothing to improve the lives of women and families in Missouri; rather it robs women of the right to make deeply personal decisions about their body, life and future.”

Caitlyn Rosen and Galen Bacharier contributed to this report.