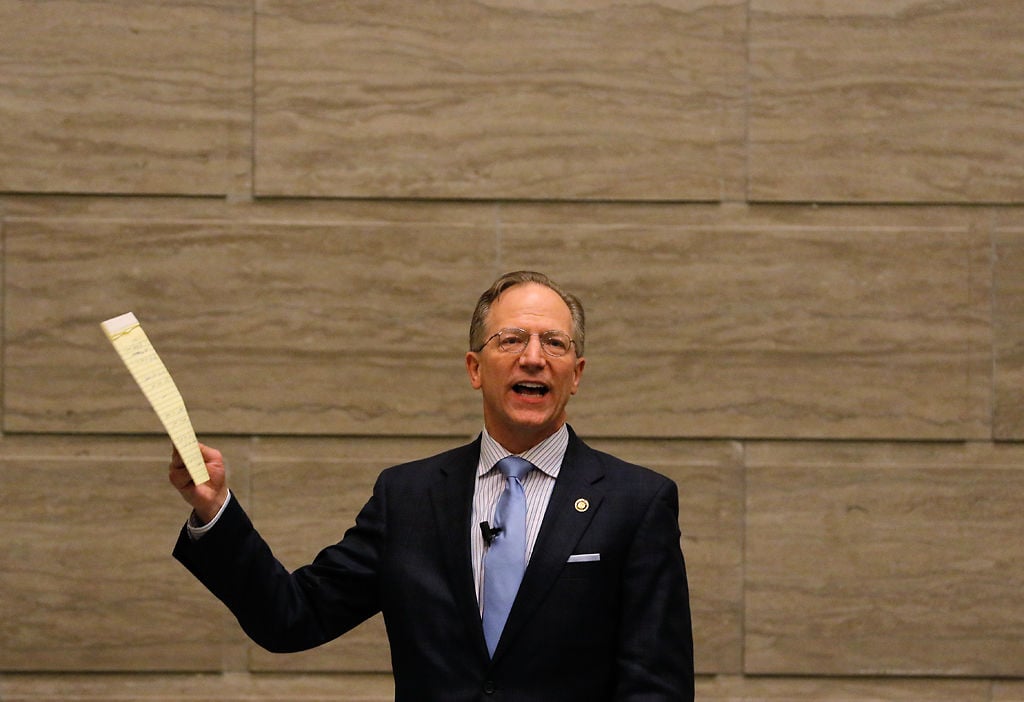 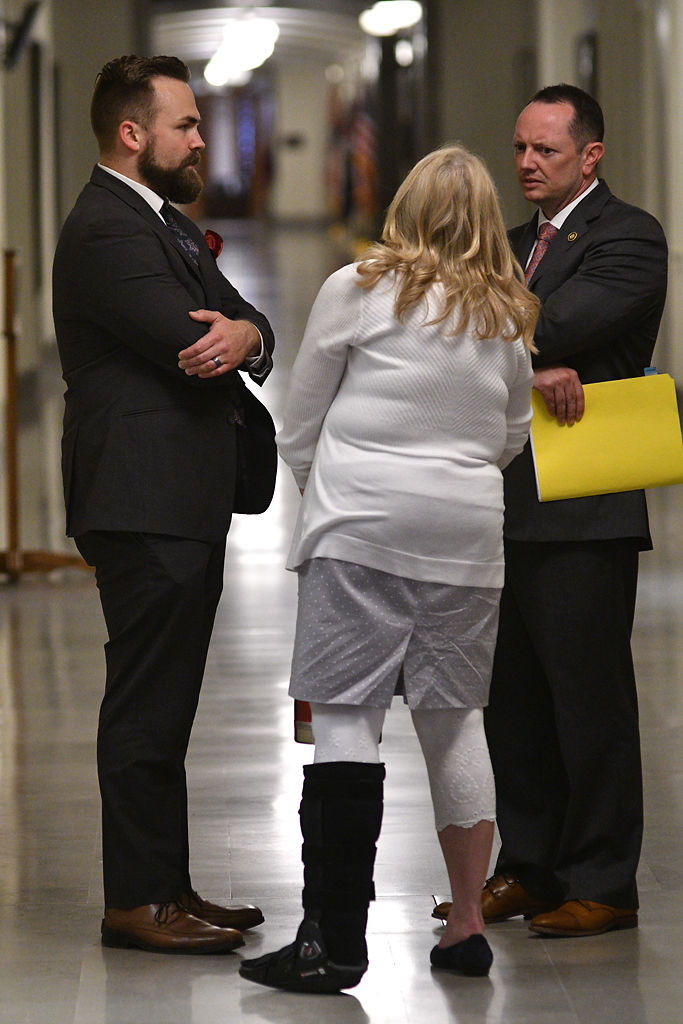 From left, Rep. Nick Schroer, Sen. Jeanie Riddle and Sen. Eric Burlison talk in the hallway Wednesday at the Missouri State Capitol building in Jefferson City. Schroer is the sponsor of House Bill 126. 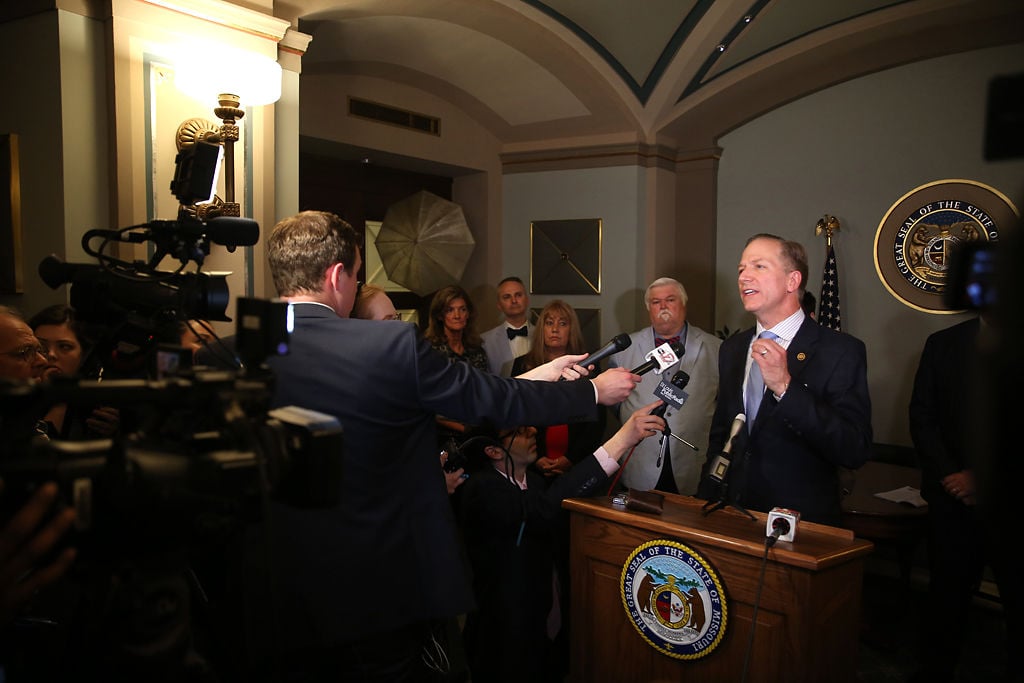 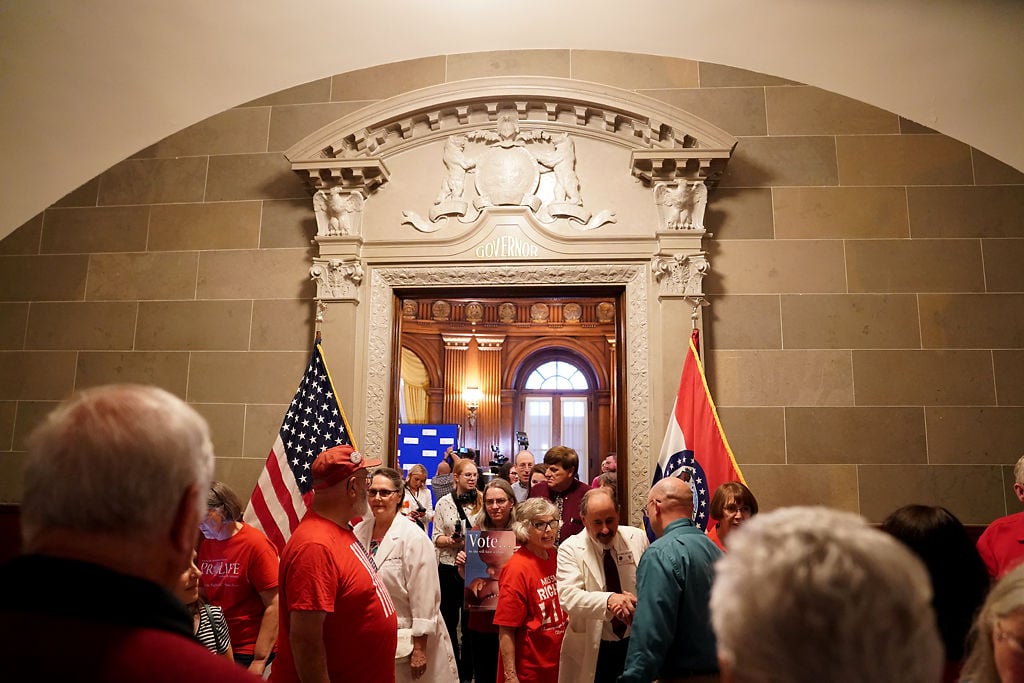 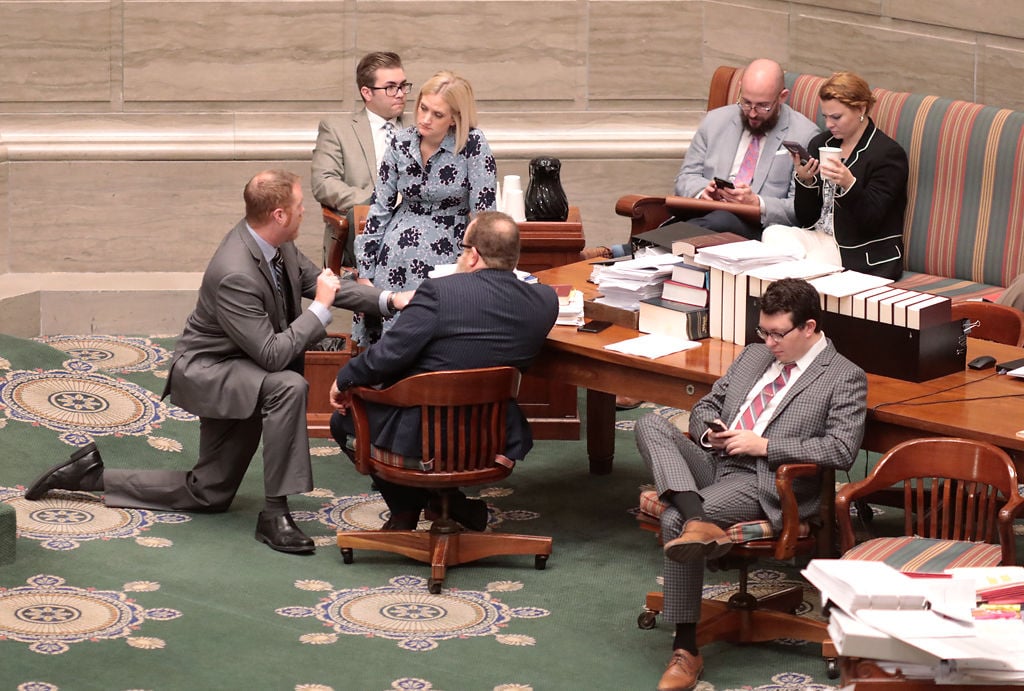 Senators gather Wednesday at the edge of the Senate floor during a filibuster on abortion legislation in Jefferson City. The filibuster started Wednesday morning and finally came to an end early Thursday, with the Senate voting 24-10 in favor of the Missouri Stands for the Unborn Act. 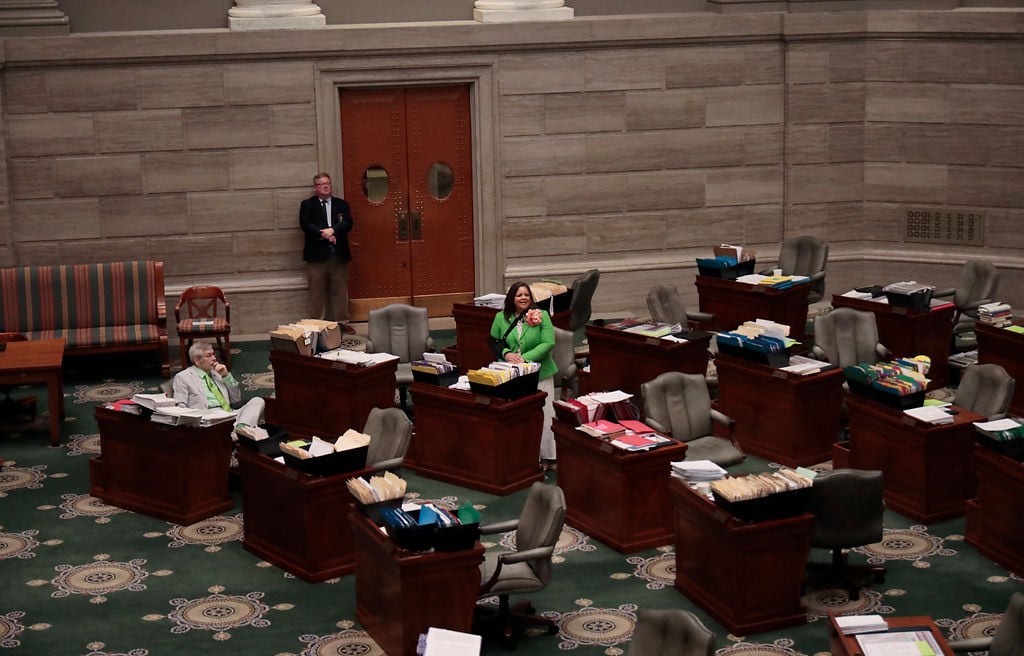 Sen. Kiki Curls, D-Kansas City, stands Wednesday in the Missouri Senate. Lawmakers began filibustering an anti-abortion bill Wednesday morning before it was passed Thursday. If signed into legislation, it would be one of the strictest in the country. 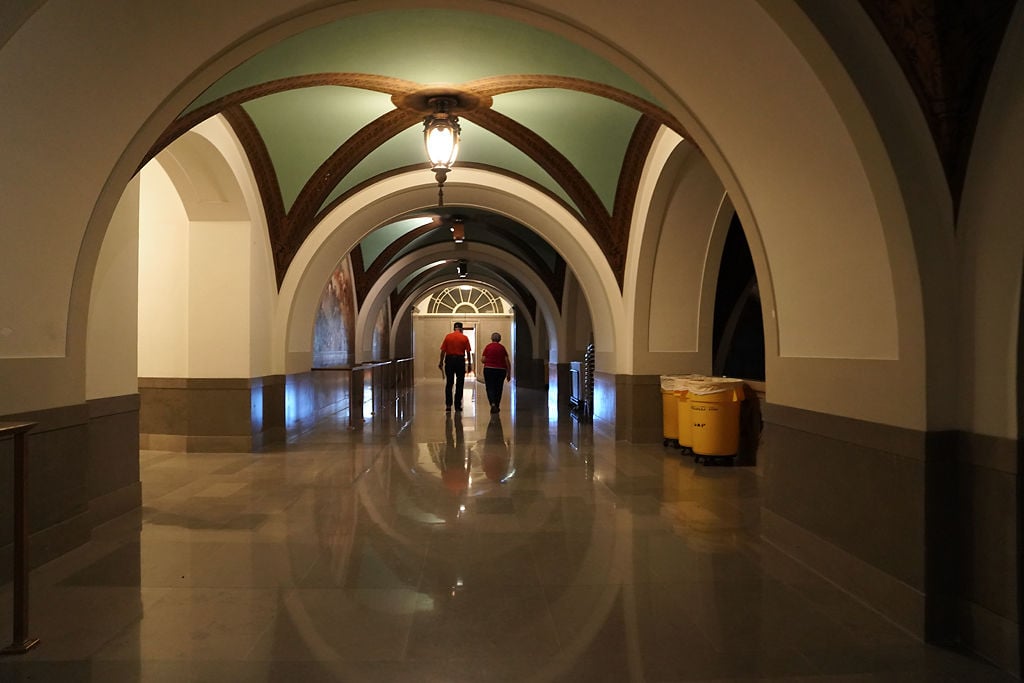 Two supporters of the house bill wander through the halls of the Missouri State Capitol on Wednesday in Jefferson City. 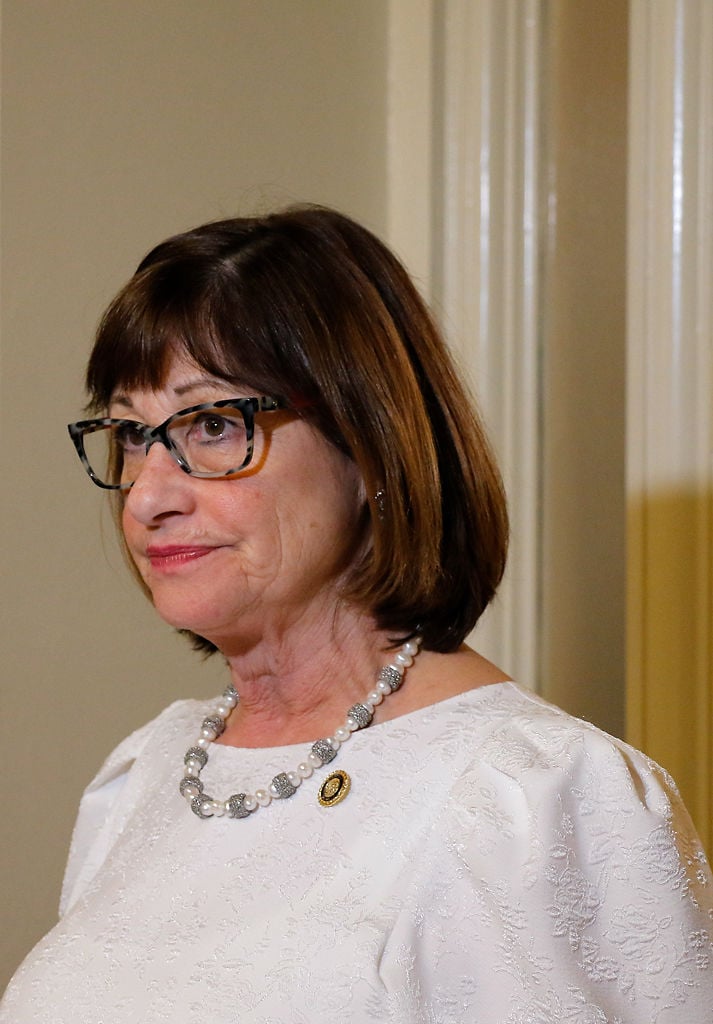 Sen. Jill Schupp, D-St. Louis, speaks at a news conference after the the Senate voted to approve a substitute version of HB 126 on Thursday at the Missouri State Capitol in Jefferson City. 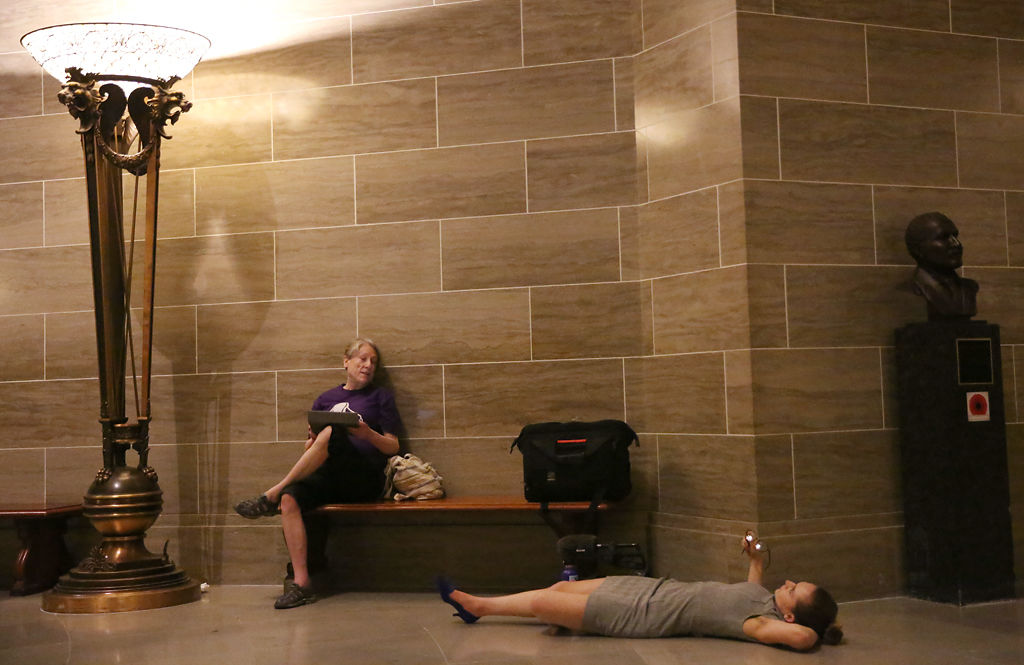 Megan Casady lies on the ground while Sue Gibson sits nearby late into Wednesday night at the Missouri State Capitol. The women had been at the capital since 10 a.m. and noon, respectively, waiting for results on HB 126. 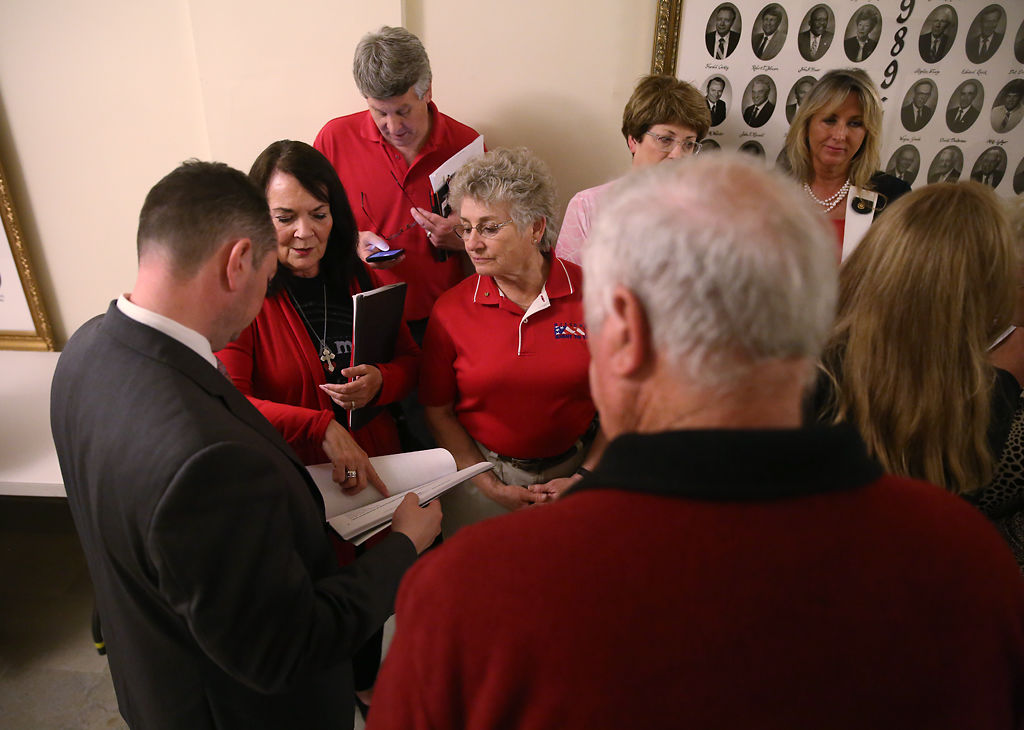 Sen. Eric Burlison, R-Battlefield, left, meets with Kathy Forck, center, and Therese Sander, right, on Wednesday night at the Missouri State Capitol building. Both women are anti-abortion activists. Forck is with Team P.L.A.Y. (Pray, Legislation, Action, You) while Sander is with Missouri Right to Life. 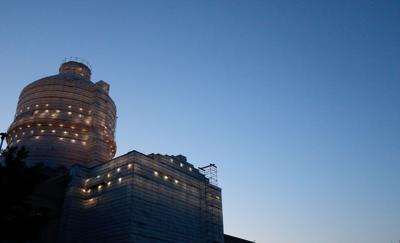 JEFFERSON CITY — Hours of contentious negotiations ended early Thursday morning when the Missouri Senate voted 24-10 in favor of the “Missouri Stands for the Unborn Act,” which would place new limits on abortions in the state.

A number of changes were made to the bill to end a Democratic filibuster. But even with those revisions, House Bill 126 would become one of the most restrictive abortion laws in the nation when signed by Gov. Mike Parson, who held a rally in his office surrounded by anti-abortion advocates Wednesday evening to push for its passage while Democrats were holding up progress with a filibuster.

The bill must go back to the House for a final vote before the session ends at 6 p.m. Friday.

Sen. Bob Onder was the only lawmaker to speak on the bill when the Senate reconvened, calling the new version “a shadow of what it once was.”

“We should be ashamed of ourselves, what we’re doing today,” Onder said. “We had a chance to move strongly to protect innocent human life and we gutted significant portions of the bill.”

Onder said he would still vote for the bill because “it’s better than nothing.”

Sen. Bill Eigel, R-Weldon Spring, said he was disappointed with the changes but still declared victory.

“We passed the most comprehensive pro-life bill in the history of the state,” Eigel said.

Sen. Cindy O’Laughlin, R-Shelbina, said Onder wanted a “pure bill,” but that the caucus is overall satisfied with the compromises. Provisions that did not survive this session will come back in the following years for discussion, O’Laughlin said.

Among the changes, the revised bill changes the ban on abortion from being based on heartbeat or brain function detection to being a straightforward eight-week ban, with the exception of medical emergencies — but no exception for rape or incest.

Sen. Jill Schupp, D-Creve Coeur, expressed her disappointment in the lack of this exception, saying it was unacceptable. Schupp and other Senate Democrats voted against the bill, but the changes made in hours of negotiations Wednesday stopped them from filibustering it.

The adopted version of the bill does include something Onder and other abortion opponents wanted. It now includes provisions that give tax credits to those donating to pregnancy resource centers, which provide support to encourage women to keep pregnancies to term.

Anti-abortion lobbyist Samuel Lee said the bill has kept the key components passed in the House, and has the added benefit of the tax credits.

“This will be an incentive for more people to donate larger amounts of money to Missouri’s 72 pregnancy resource centers,” Lee said.

The bill's abortion ban was initially tied to the fetal heartbeat, as opposed to the revised eight-week ban. Lee said there are benefits to that.

“It doesn’t require a physician to make that determination, it just says at eight weeks abortion will be prohibited,” Lee said.

Earlier on Wednesday, during a rally in his office, Parson called limiting abortion “the will of the people.”

Many elected officials in Republican states, including Missouri, have championed the idea of passing legislation that can be appealed to the U.S. Supreme Court in an effort to overturn Roe v. Wade.

But House Speaker Elijah Haahr, R-Springfield, said Missouri’s bill is not “designed for a challenge. This is the type of legislation that is designed to withstand a challenge.”

The bill contains a “trigger” section, which would go into effect if the U.S. Supreme Court were to overturn Roe v. Wade and would outlaw all abortions except those performed in the case of a medical emergency.

The bill also includes a provision that would require, in addition to written parental consent, written notification to be sent to the other parent or legal guardian prior to a minor receiving an abortion in some cases.

The bill also outlaws abortions performed on the basis of sex, race or Down syndrome status, though it was changed in Wednesday's negotiations to state that those factors must be the sole reason for the abortion, according to Onder.

When the Senate debate began around 11 a.m., the  chamber was lined with pro-abortion rights activists wearing bright pink “I stand with Planned Parenthood” shirts and anti-abortion lobbyists and groups.

Parson kicked off the day with a tweet: “It’s time to make Missouri the most Pro-Life state in the country! Thanks to leaders in the House and Senate, we are one vote away from passing one of the strongest #ProLife bills in the country — standing for life, protecting women’s health, and advocating for the unborn.”

Schupp worked in tandem with other Democratic Senators to filibuster the bill.

Schupp, choking back tears, read the testimony of a father whose child was diagnosed with a fatal fetal anomaly. He urged the body to allow parents the opportunity to abort babies in such cases.

Sen. Lauren Arthur, D-Kansas City, said she hoped that the legislature would take up other important pieces of legislation as well. The abortion debate is widely expected to shut down progress in the Senate.

“I’m hopeful that as a body, we believe in the institution, and we believe in working through this so that we can get to those other items, and we’ll see how today goes,” Arthur said.

Anna Lewis contributed to this report.