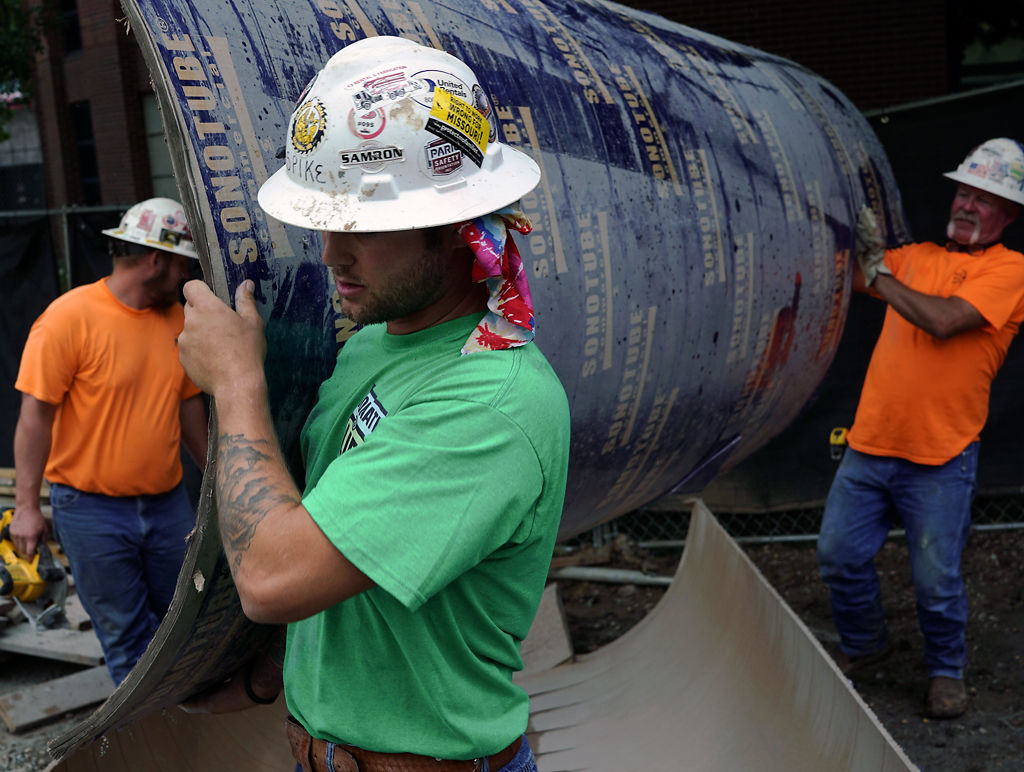 Grayden Pretz, front, clears out space on site for more work Thursday in Columbia. Pretz works for Pro Construction services and is helping build the new Center for Missouri Studies. 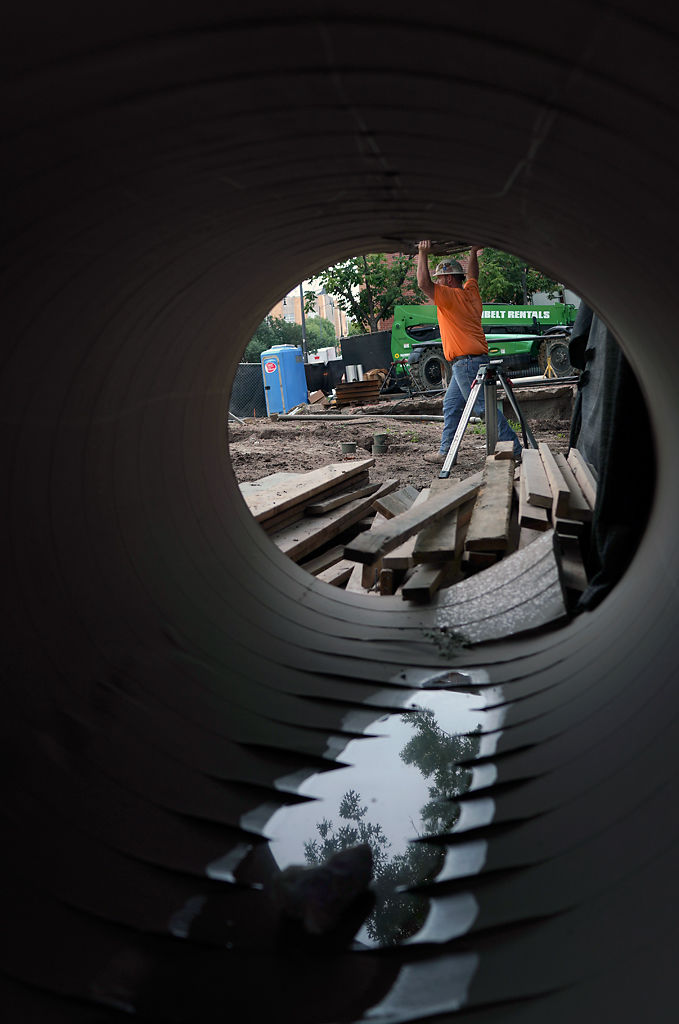 Workers from the Carpenters Local 945 union are supplying the new Center for Missouri Studies with electric, chill water, domestic water and telecom on Thursday. 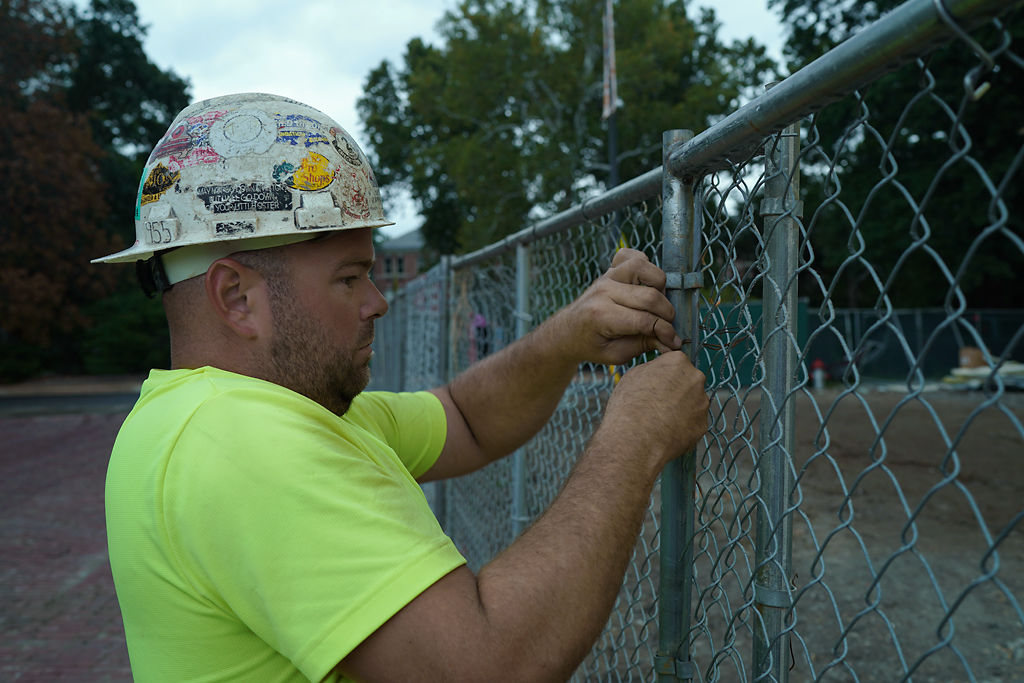 Cory Hoescher locks up the fence for the Center for Missouri Studies before rain hits on Thursday. Hoeshcher takes wire and twines it together till it is tightly shut. 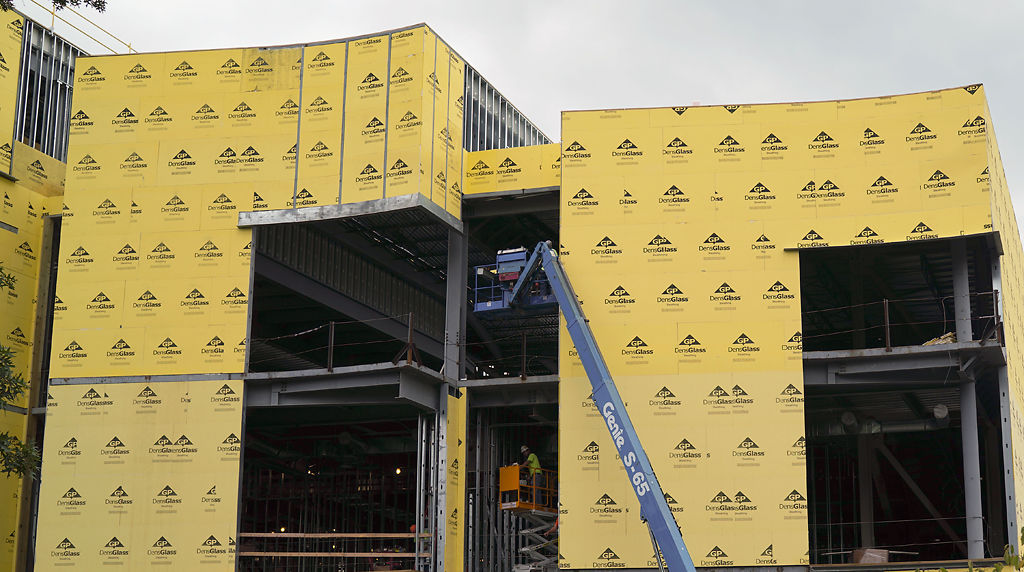 Construction continues on the Center for Missouri Studies by Pro Construction and the Carpenters Local 945 union on Thursday. The building is located on Elm Street between Sixth and Seventh street. 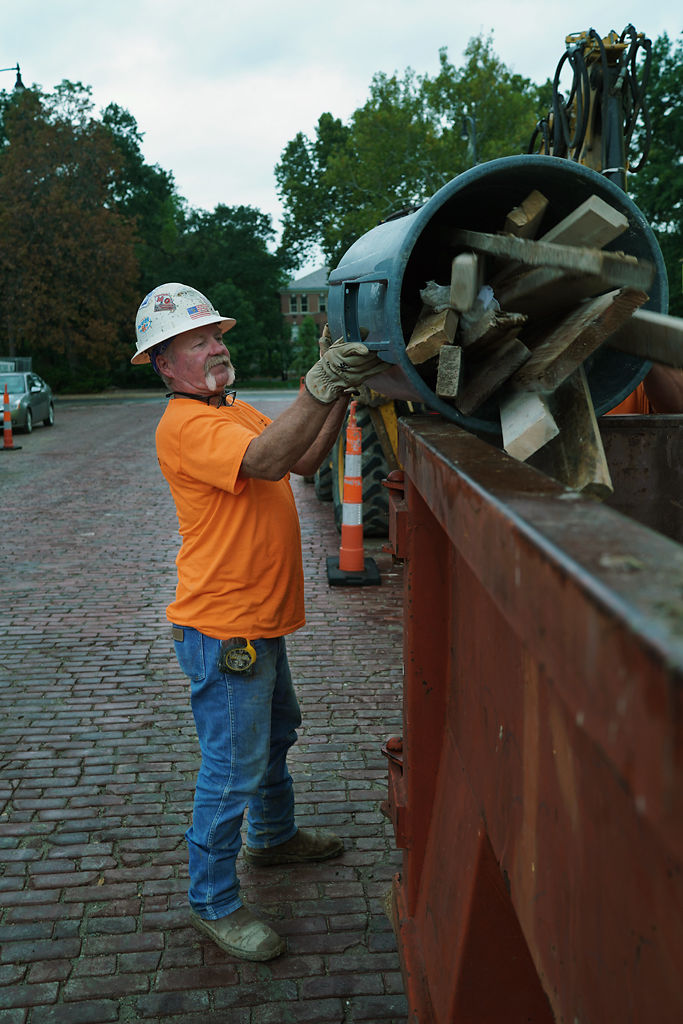 Steve Jurgensmeyer clears debris into a dumpster Thursday on Seventh Street. Jurgensmeyer is a union worker with Carpenters Local 945 and the job superintendent with Pro Construction Services.

Grayden Pretz, front, clears out space on site for more work Thursday in Columbia. Pretz works for Pro Construction services and is helping build the new Center for Missouri Studies.

Workers from the Carpenters Local 945 union are supplying the new Center for Missouri Studies with electric, chill water, domestic water and telecom on Thursday.

Cory Hoescher locks up the fence for the Center for Missouri Studies before rain hits on Thursday. Hoeshcher takes wire and twines it together till it is tightly shut.

Construction continues on the Center for Missouri Studies by Pro Construction and the Carpenters Local 945 union on Thursday. The building is located on Elm Street between Sixth and Seventh street.

Steve Jurgensmeyer clears debris into a dumpster Thursday on Seventh Street. Jurgensmeyer is a union worker with Carpenters Local 945 and the job superintendent with Pro Construction Services.

Earlier this year, Gabelsberger, a member of Carpenters Union Local 945 in Jefferson City, had an additional job to do: He campaigned against “right-to-work,” which he felt was just as vital for putting food on the table.

“Your livelihood and your family’s livelihood depends on it, so you make time for it,” Gabelsberger said.

On Aug. 7, Gabelsberger and 939,972 other Missourians — 67 percent of voters — voted “no” for Proposition A, preventing the right-to-work law that former Gov. Eric Greitens signed in February 2017 from taking effect.

Over the past several decades, the U.S. labor union movement has seen a significant decline in membership, MU law professor Rafael Gely said. According to Gely, about one-third of the U.S. labor force was either unionized or represented by labor unions in the mid-1950s. Now, Gely said, it’s close to 10 percent.

After this period of decreasing union power, union workers see the victory over Proposition A as a sign of unions’ refusal to die away.

“It shows that the labor movement is energized,” said Eric Scott, a field representative for Laborers’ Local 773, “and ready to stand up and fight back.”

Laborers’ Local 773 comprises public-sector workers who would not have been affected by Proposition A, but both public- and private-sector unions worked in support of the anti-right-to-work campaign.

“If you disregard the importance of our public sector, like our teachers, our firefighters, our police officers,” said Quiema Spencer of Kansas City’s Pipe Fitters Local 533, “then you care quite a bit less about the construction workers.”

“I felt that it was a personal attack on people who dedicated their lives to doing these kinds of necessary jobs,” Spencer said. “We must cooperate because we are all protected by our collective bargaining.”

Scott said the Proposition A voting results showed that most Missourians — not just Democrats or union workers — see the benefits of increased union collective bargaining power.

“It’s clear that support for unions and for collective bargaining is a bipartisan issue,” Scott said. “There’s no getting around the fact that the past few decades have not been very kind to labor, but I think the defeat of Proposition A shows that the tide may be turning and that we may be hopefully in for a new era of growth in the labor movement.”

Others, however, are not so optimistic. Given the current supermajority of Republicans in the Missouri legislature, many union workers worry lawmakers will just pass another right-to-work law.

“They can run this legislation right back through in January again if they choose to,” said Jason Verslues, a business representative for Carpenters Union Local 945 from Jefferson City. “Even though the people voted against it and made a statement that the people don’t want it, I don’t think that the politicians who are in place care. I think they’re just gonna do whatever they want to do anyway.”

According to the St. Louis Post-Dispatch, Rep. Bill White, R-Joplin, said “he does not expect legislative leaders to push for the issue after it was dumped by voters.” White told the Post-Dispatch that he’ll likely file a right-to-work bill next year but that he doesn’t expect it to move past a committee hearing.

Gely acknowledged the Missouri legislature could pass another right-to-work law and put it on the ballot, but he said he thinks the overwhelming defeat of Proposition A might cause lawmakers to consider carefully the timing of such a move.

“Was the margin of victory such that it will send a message to the other side that labor is a force that has to be taken more seriously when we are deciding public policy?” Gely said. “Perhaps the 2-1 is such that politicians will be more careful now and might be less likely to come back and try to reenact the right to work.”

This possibility of future right-to-work legislation, however unlikely, has union workers looking to November.

“It all depends on the midterm elections,” Gabelsberger said. “If we have politicians that are willing to listen to the citizens of Missouri and what they say, we might be in great shape. But labor is always gonna have an uphill battle because, in their opinion, we’re insignificant — even though they sure do like the buildings that we build them.”

Although the future of collective bargaining is uncertain, the anti-right-to-work campaign brought union leaders another benefit: increased political involvement among members.

“Politics, for construction workers, traditionally is not really a thing we think about on a day-to-day basis,” Spencer said. “The excitement I see from our members in knowing that they have a voice and a choice to overturn things that don’t sit right with them is very exciting and encouraging.”

Spencer hopes union workers have gained an understanding of how politicians’ decisions can affect them directly but also the power workers have to affect those decisions.

“It makes you more aware of, you know — they have the power to make these new laws and change things for us out here,” said Steve Jurgensmeyer, a Carpenters Union Local 945 member who was working on a job in downtown Columbia last week. “Luckily, we were able to speak our vote and shut it down.”

Washington University law professor Marion Crain said she was most intrigued by the way in which groups against the measure framed issues associated with right-to-work. She said that by focusing on widespread issues and not just appealing to union workers, the movement was able to draw significant support.

Jeremy Cady, state director for Americans for Prosperity-Missouri, also said he was impressed by the mobilization effort against right-to-work but still remains optimistic for proponents of the legislation.

“The unions dumped $20 million of out-of-state union money into Missouri, and they pushed their message much harder than those that were supporting right-to-work,” Cady said. “I think a lot of their messaging was misleading and is unfortunate, but we will continue educating Missourians on the truth of right-to-work, of what it really does and what it really means.”

In order to prevent union power loss in the future, Spencer said she and other union members will focus on educating the public, just as they did during the campaign against SB19, the Missouri legislature’s designation for the right-to-work bill.

“Right-to-work is an incredible, egregious misnomer,” Spencer said. “Everyone has the right to work, but that wasn’t really the issue. So we just have to make sure that we’re better prepared and that the people of Missouri are educated and understand what these policies mean. SB19 means nothing to most people.”

When there is inevitably another attempt to pass right-to-work legislation, Crain said unions’ best plan of action is to do what worked to defeat Proposition A.

“The effort to try to frame workplace issues in terms of public interest, the larger public interest, that is certainly here to stay,” Crain said. “To avoid a sort of portrayal of labor as a special interest group, advocating only for its members’ own benefits, it has to turn to this kind of strategy. It’s the only way there’s going to be any traction with a wider number of people who aren’t union members and who don’t come from union families.”

Union members have already chosen their next challenge after the Proposition A vote. On Monday, according to The Associated Press, public-sector workers filed a lawsuit against HB1413, a law that places certain restrictions on public-sector unions, and a minimum wage increase measure called “Proposition B” will appear on the ballot in November. For Spencer, however, these are just small battles in a larger war.

“The fight will continue,” Spencer said. “I feel like we can’t relax and these things will continue to happen. And so we just have to be prepared to face them when they do.”