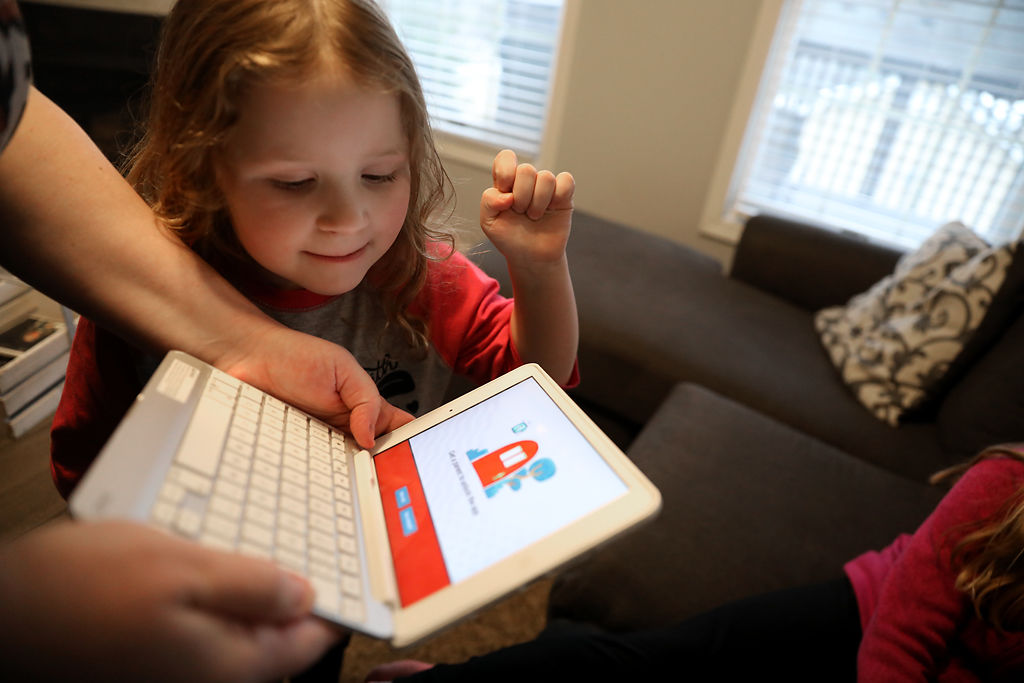 Kensington McCann, 5, looks at a tablet that her mother, Katrina McCann, opens for her to watch videos on YouTube Kids on Feb. 22 in Columbia. Katrina has two children, Emerson McCann, 10, and Kensington McCann. Katrina said that she does not intentionally limit the time that her children use tablets. Both of her children have other forms of entertainment and activities besides watching tablets and screens. Kensington McCann, 5, watches an educational video on a tablet on Feb. 22 in Columbia. Katrina McCann, Kensington's mother, said she wants moderation in the education of her two children. Her children were able to watch educational videos, read books and draw on tablets. 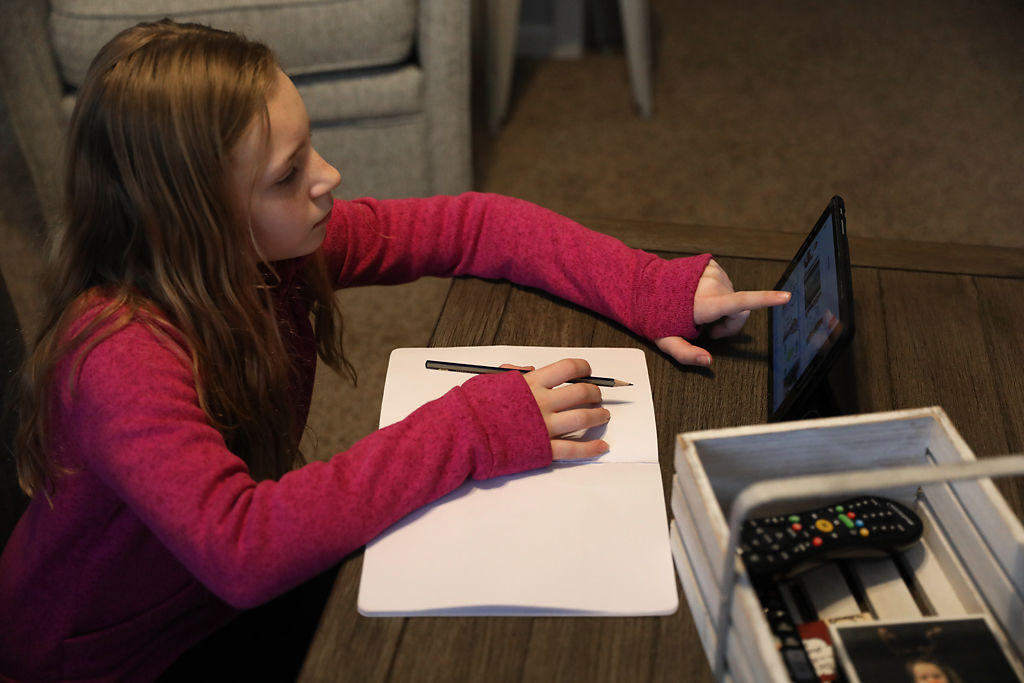 Emerson McCann, 10, draws and clicks on a tablet on Feb. 22 in Columbia. Katrina McCann, Emerson's mother, said Emerson loves reading and a tablet is beneficial in reading due to its portability.

Kensington McCann, 5, looks at a tablet that her mother, Katrina McCann, opens for her to watch videos on YouTube Kids on Feb. 22 in Columbia. Katrina has two children, Emerson McCann, 10, and Kensington McCann. Katrina said that she does not intentionally limit the time that her children use tablets. Both of her children have other forms of entertainment and activities besides watching tablets and screens.

Kensington McCann, 5, watches an educational video on a tablet on Feb. 22 in Columbia. Katrina McCann, Kensington's mother, said she wants moderation in the education of her two children. Her children were able to watch educational videos, read books and draw on tablets.

Emerson McCann, 10, draws and clicks on a tablet on Feb. 22 in Columbia. Katrina McCann, Emerson's mother, said Emerson loves reading and a tablet is beneficial in reading due to its portability.

If your child is 2 to 5 years old and is looking at screens for more than an hour a day, that’s too much.

That’s the view of the American Academy of Pediatrics, which advises no more than that amount of time looking at any screen — TVs, tablets or cellphones — per day.

And yet preschoolers watch an average of 4 1/2 hours of television daily, the Academy reports. That figure doesn’t even include that 30 minutes on your iPad waiting at a restaurant, or another hour watching a movie on your laptop driving the family to and from your parents’ house outside town.

One risk of this startling reality is the negative impact screen time is having on children’s eye development. Myopia, or nearsightedness, a sometimes serious eye condition, is now considered a worldwide epidemic. And the increasing use of screens is playing a part.

Cases of myopia in children have doubled in the U.S. in the past 50 years, according to a 2016 study from the Keck School of Medicine and the National Institutes of Health. Commonly resulting in the blurriness of distant objects, myopia can put a person at a greater risk for a number of vision loss conditions.

One Columbia optometrist has no doubt that the cause of the myopia increase is the rise in screen exposure. Sahba Jalali, the clinical director of Advanced Vision, said research has linked the rise in screen time to worsening vision.

“We know for a fact that the vision of youngsters is changing at a much faster rate than it used to because children tend to be inside more, outside less and utilize screen time more,” he said.

Maggie Cardonell, who is a pediatric ophthalmologist with MU Health, has also been concerned about the long-term effects of increased screen time on her young patients’ eyesight. While most parents are aware of common issues such as eye strain and dryness, she often has to educate them on other potentially permanent effects, she said.

“I often explain to families that what is more concerning is that recent studies are suggesting that ‘near work,’ whether it be spending time on phones, or computers or playing video games, or whether it be reading or writing, may be at least one component contributing to the worldwide myopia epidemic,” she said.

By 2050, it is predicted that half of the world’s population will be nearsighted, according to a study published by the National Institutes of Health. Of those five billion people, one billion will suffer from high myopia, a greater than average amount of nearsightedness, which can cause thinning of the retina. This can lead to retinal detachment and pathological myopia, the most extreme forms of nearsightedness, which sometimes result in “devastating vision loss,” according to the Institute for Control of Eye Myopia in Children. 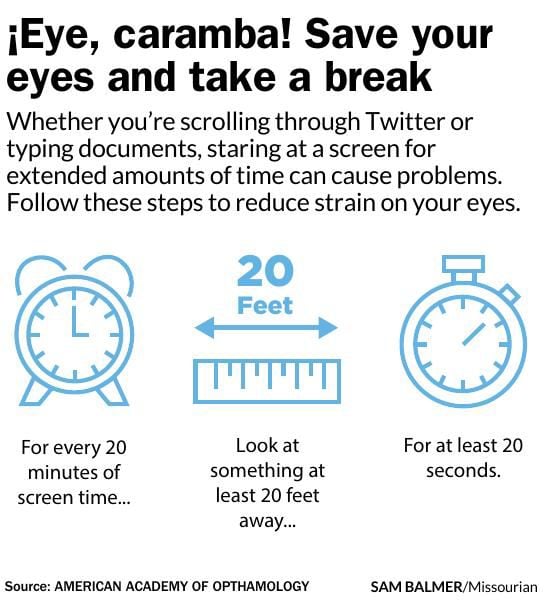 The rapid increase in cases of myopia has Cardonell worried about the risk for many other eye conditions associated with the condition.

Cardonell said that while many studies offer evidence that near work — activities such as screen-time and reading — is a major contributing factor to myopia, the reason remains mostly unknown.

“There are multiple hypotheses,” she said. “Scientists are looking for a definitive answer.”

One of the most important ways to reduce the risk of myopia, she said, is to spend quality time outdoors during daylight hours. Studies have confirmed that kids who spend more time outside are less likely to become myopic, she said. But even that is becoming more difficult. Cardonell knows from personal experience in medical school that it’s impossible to avoid screen time in the digital age, especially for students required to do work on screens.

“It’s often really hard to talk to parents and the students about how they limit this time,” she said, “because education is a huge priority as well.”

One Columbia mother, Katrina McCann, who has two daughters who use screens daily, points out that some schools allow screen time while in class and give the students tablets to take home as well.

“At school now, they give screen time, like ‘bring your tablet day’ and media lab,” she said. “How bad can it be? Why are they doing it at schools, too, if it’s that bad for you?”

“Being able to know, use and apply technology is an imperative skill set for 21st century learning,” she said.

Devices are used as tools to complement the curriculum being taught by teachers, not as the main source of education, she said.

“We also only have students for approximately 35 hours out of 168 hours in a week,” she said. “A majority of their time is spent outside of school. So it must be a partnership with families in order to address concerns about excessive usage.”

In general, kids are born with hyperopic eyes, meaning they are far-sighted, Cardonell said. While in a hyperopic state, an image develops behind the retina, making it blurry, according to the National Eye Institute. Through a process called emmetropization, the eye developes until images come into clear focus on the retina, she said. But, sometimes the eye continues to grow, causing light to be focused in front of the retina, resulting in nearsightedness.

Jalali agrees that while screen use is an issue for all ages, it can be particularly sensitive for kids from 2 to 6 years old whose vision development is most vulnerable. During that time, the brain and eyes are learning to communicate with each other; disrupting this communication leads to various eye conditions later in life.

For Jalali, eye strain is one of three major concerns stemming from excessive screen time.

The second: Ultraviolet light emitted from screens can add to the development of serious conditions.

The third: When people look at screens for more than 15 or 20 minutes, they start to blink less, which can cause irritation and inflammation.

Jalali said he treats tear volume and tear quality issues, also known as dry eye, in young children more now than he did 25 years ago.

“That leads to burning eyes,” he said. “It leads to redness. It leads into more irritation. It leads to more inflammation of the eye.”

Parenting & what the experts say

For McCann, her daughters’ tablets are often a saving grace. She’s a stay-at-home mom who runs out of ways to find time for herself and what she needs to do. She does not limit screen time for her children, but ensures they are involved in other activities as well.

“I don’t think TV or watching your tablet is the worst thing,” she said. “I feel like a lot of times as parents to get through the day to day, it’s all about surviving.”

McCann’s daughters, who are 5 and 10 years old, each have their own tablet, which they often use when they get home from school and before bed. The girls watch different kinds of videos on Youtube Kids, a modified version of the video-sharing website, as a way to wind down from school or from the day.

The number of snow days this winter has been challenging for McCann, whose husband is in the military and often deployed. With few opportunities for outdoor activities, she often feels overwhelmed with both of her children at home. The tablets provide quick and quiet entertainment.

“On snow days, I’ve been babysitting people’s kids who have to go to work,” she said. “I say (to their moms) bring their tablet. It’s an easy way to entertain them.”

Her daughters’ pediatrician has never recommended a limit on screen time, McCann said.

Cardonell recommends the “20-20-20” rule to her patients’ parents when discussing limitations on screens. Every 20 minutes a child, or adult, should take a break for at least 20 seconds, and look at something at least 20 feet away.

“Children likely need reminders,” she said. “Setting a timer can be helpful. Remind them to blink when watching screens and really encourage time outdoors, free from screens while it is still light outside.”

Jalali agrees kids should spend more time in sunlight, wearing sunglasses, of course, to protect their eyes from UV light. He recommends a 30-minute time limit on screens for his younger patients.

“The key is frequent breaks from the computer,” he said. “That’s what studies show.”

Eye strain, migraines, and back pain, oh my! It's the virtual life

Optometrists and physical therapists are seeing evidence that home is where the hurt is for people who haven't quite made the right ergonomic changes to their work spaces.