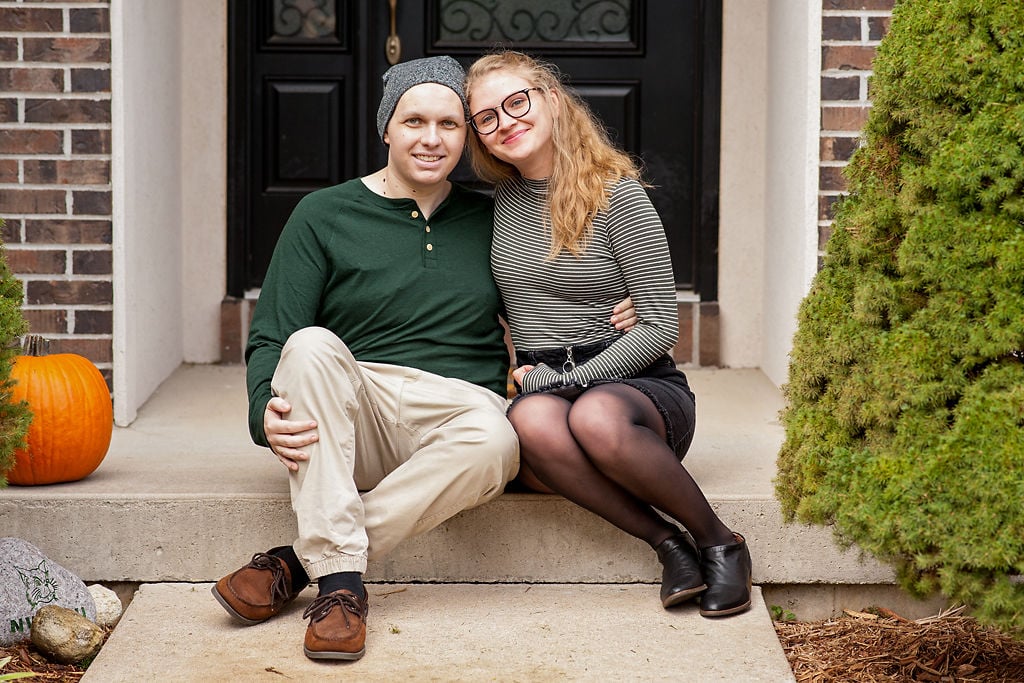 Cooper Moss and his wife, Kaitlyn Ard Moss, wrap their arms around each other for a photo on their front doorstep. The two wed Nov. 26 in Columbia. 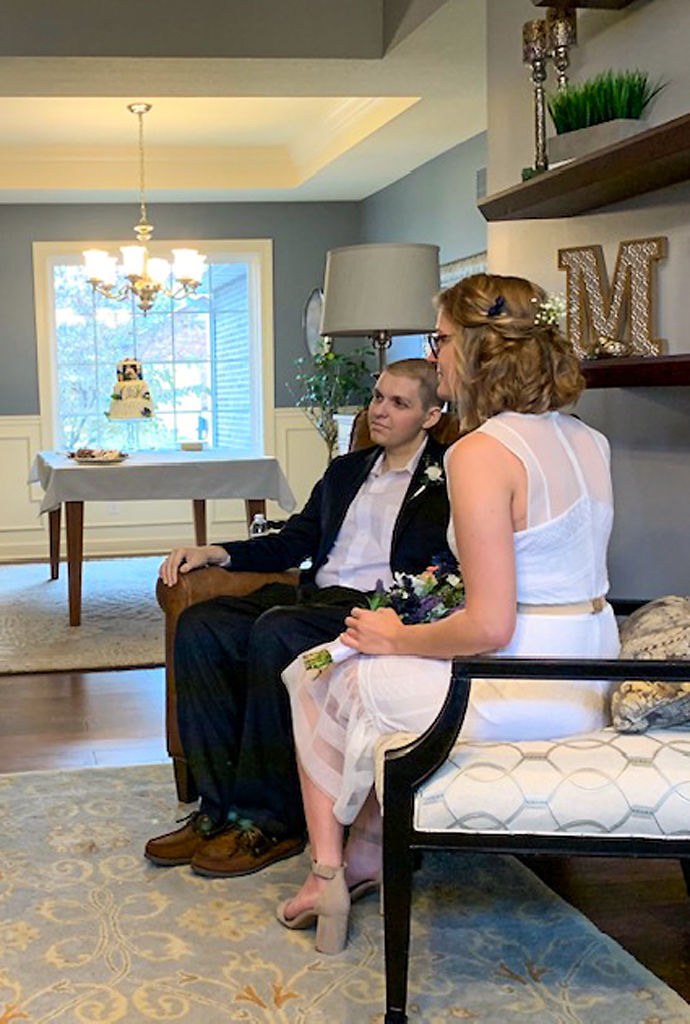 {div}Cooper Moss and his wife Kaitlyn Ard Moss sit together on their wedding day. “I was so surprised,” Kaitlyn said of the proposal. The two wed a week later on Nov. 26 in Columbia. {/div} 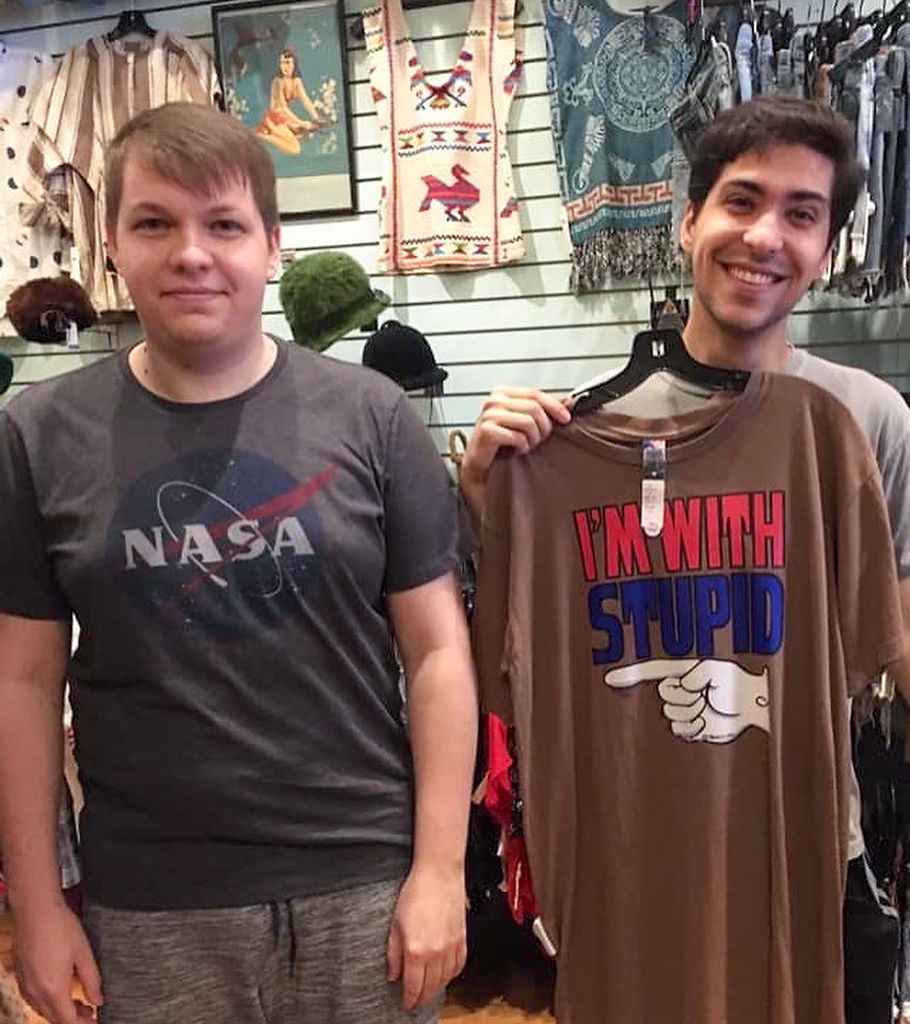 Ethan Moss holds up an “I’m With Stupid” t-shirt pointing at his brother, Cooper Moss, at a gift shop.

Cooper Moss and his wife, Kaitlyn Ard Moss, wrap their arms around each other for a photo on their front doorstep. The two wed Nov. 26 in Columbia.

{div}Cooper Moss and his wife Kaitlyn Ard Moss sit together on their wedding day. “I was so surprised,” Kaitlyn said of the proposal. The two wed a week later on Nov. 26 in Columbia. {/div}

Ethan Moss holds up an “I’m With Stupid” t-shirt pointing at his brother, Cooper Moss, at a gift shop.

Cooper Lane Moss was always the lighthearted one in the room, always bringing a laugh to those in his company. An avid gamer and former passionate percussionist in Rock Bridge High School’s marching band, Moss, 23, died Thursday, Dec. 5, after his battle with soft tissue sarcoma.

“Whatever Coop was going through or doing, he would always have a sense of humor about everything,” his mother, Nancy Moss, said.

Cooper was born Dec. 5, 1996, in Columbia. Following in the footsteps of his older brother, Ethan Moss, and his father, Steve Moss, Cooper joined the Boy Scout Troops 4 and 708 and earned the rank of Eagle Scout. Cooper was also active in several musical groups at Rock Bridge High School like the marching band, concert band and the wind ensemble, where he played the vibraphone and a variety of others in the pit. He graduated in 2015.

Cooper attended Moberly Area Community College and Missouri State University before moving to Texas for a year to be near friends he met through gaming.

As he grew older, Steve Moss said Cooper’s interests included gaming, a hobby he picked up after Pascale’s Pals charity gave him a laptop while in the hospital.

“Gaming was a big passion of his,” Nancy Moss said.

Nancy said the Make-a-Wish Foundation brought the Moss family to Seattle, where Cooper took part in a gaming tournament.

Gaming had also brought Cooper many of his friends, including his wife, Kaitlyn Ard Moss, 21. In 2017, Cooper visited his friends he met online in Texas for a New Year’s Eve party, where he met his wife.

The two married Nov. 26, 2019, within a week of the proposal. When Cooper had brought the idea up to his mother, the two immediately looked on Pinterest for rings, Nancy said.

“We didn’t really have a plan, but we made it happen,” she said.

Nancy said the ring includes diamonds from one of her favorite aunt’s ring. The family put together the ring, cake, flowers, decorations and a dress just in time before Thanksgiving.

“Best wedding I’d ever been to,” his sister, Maia Moss, added.

Throughout his six-year battle with cancer, a recurring family tradition was to eat Lucky’s pizza during hospital stays.

“He was a massive foodie,” Kaitlyn said. “He loved to cook; he loved to try new recipes and watch videos about cooking.”

Nancy recalled a night recently where Cooper was hungry and wanted sushi. Maia and his mom were watching videos about cooking when Cooper leaned over and said, “I want that now,” his sister said. The two made a late-night Hy-Vee run and got some sushi rolls.

“He did his happy food dance,” Nancy said.

Cooper died surrounded by his family in the hospital Thursday, Dec. 5, eating Lucky’s pizza that night.

The Moss family is planning to host a “Shindig for Cooper” on Saturday, Jan. 11, to celebrate him.

“He wasn’t really a funeral guy or celebration-of-life guy,” Steve said, “so in true Cooper fashion, it’s going to be called a ‘Shindig for Cooper.’”