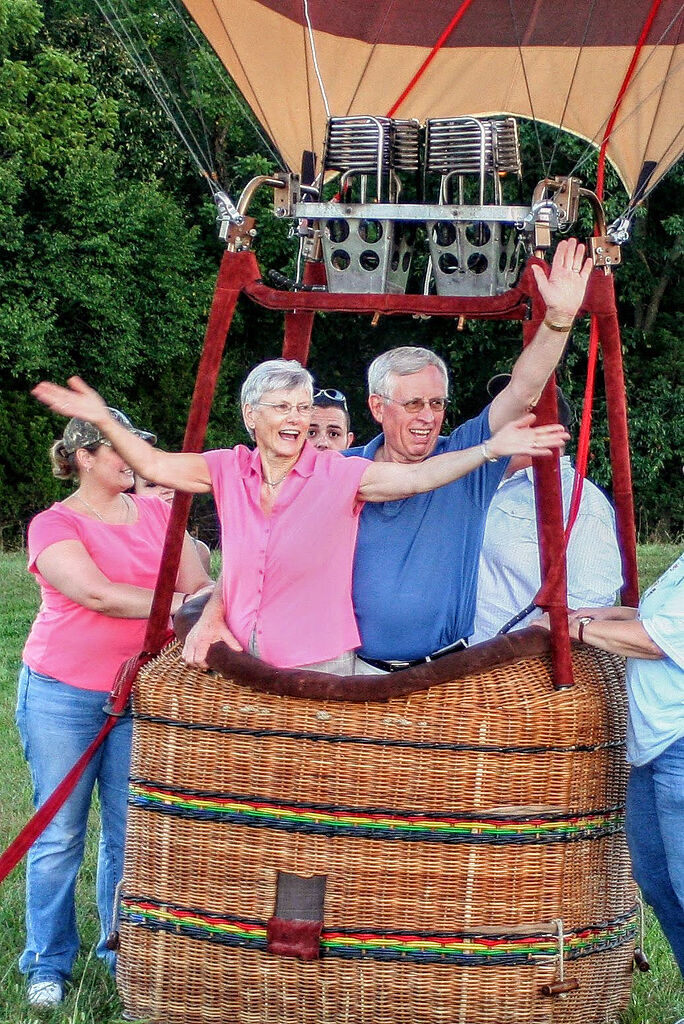 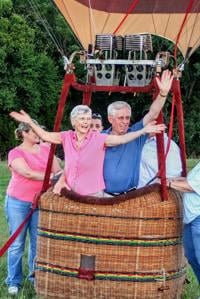 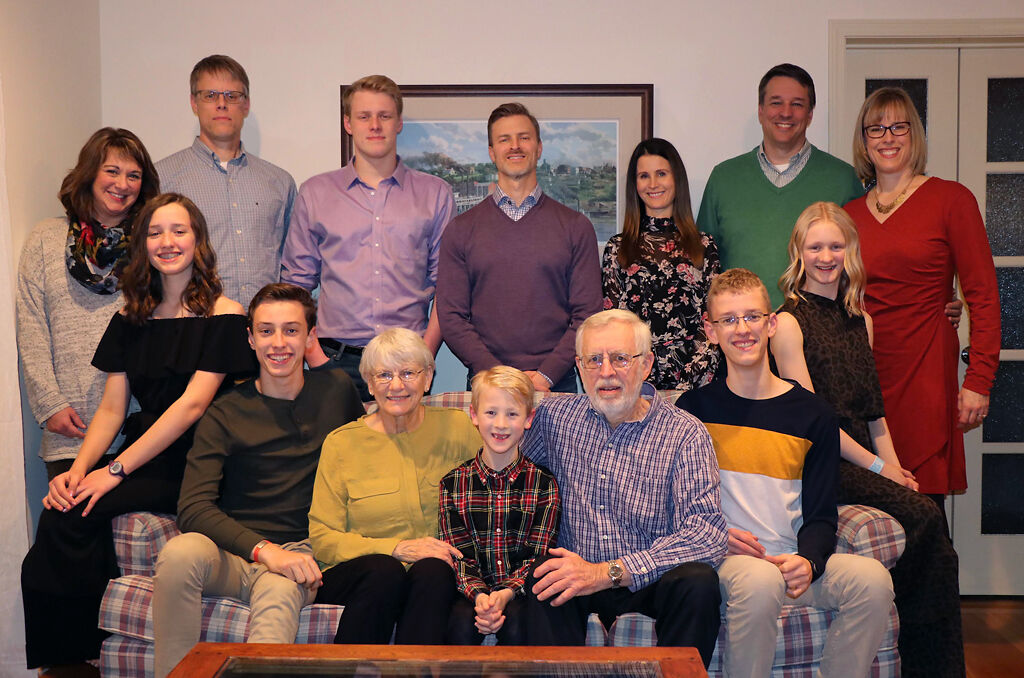 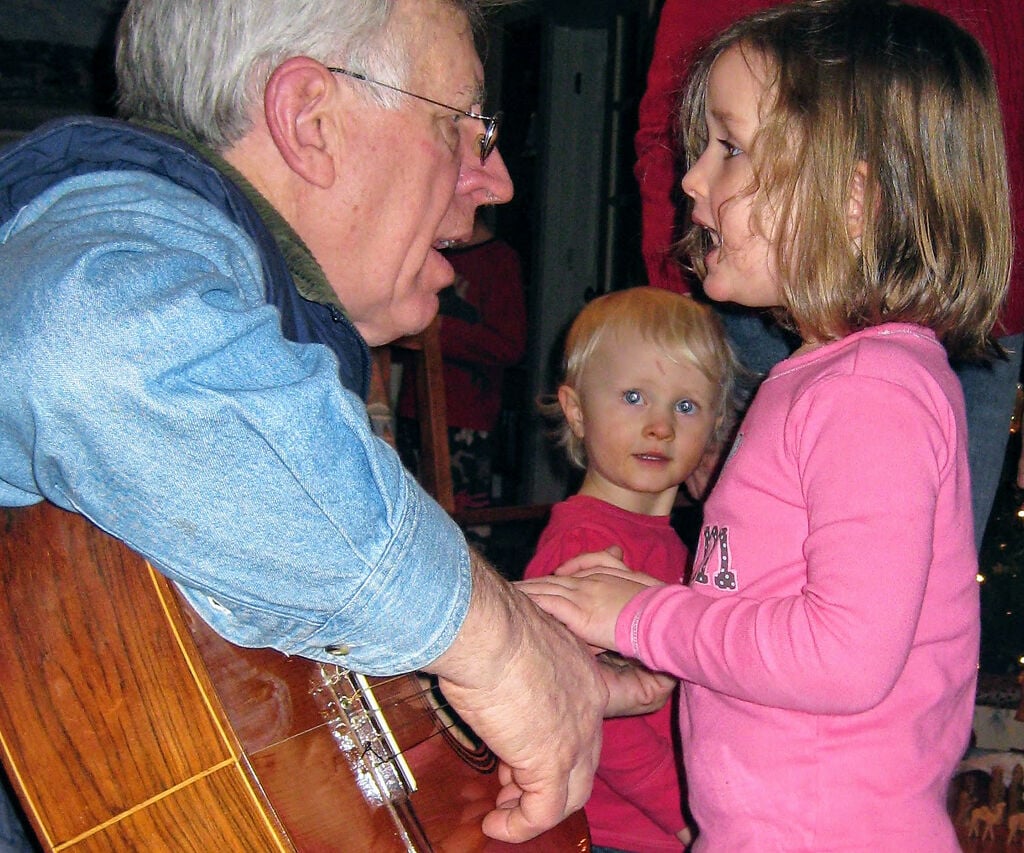 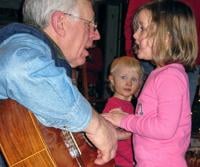 Granddaughter Eleanor Laufenberg, sings with her Papa, while granddaughter, Gwyneth Brown, looks on. 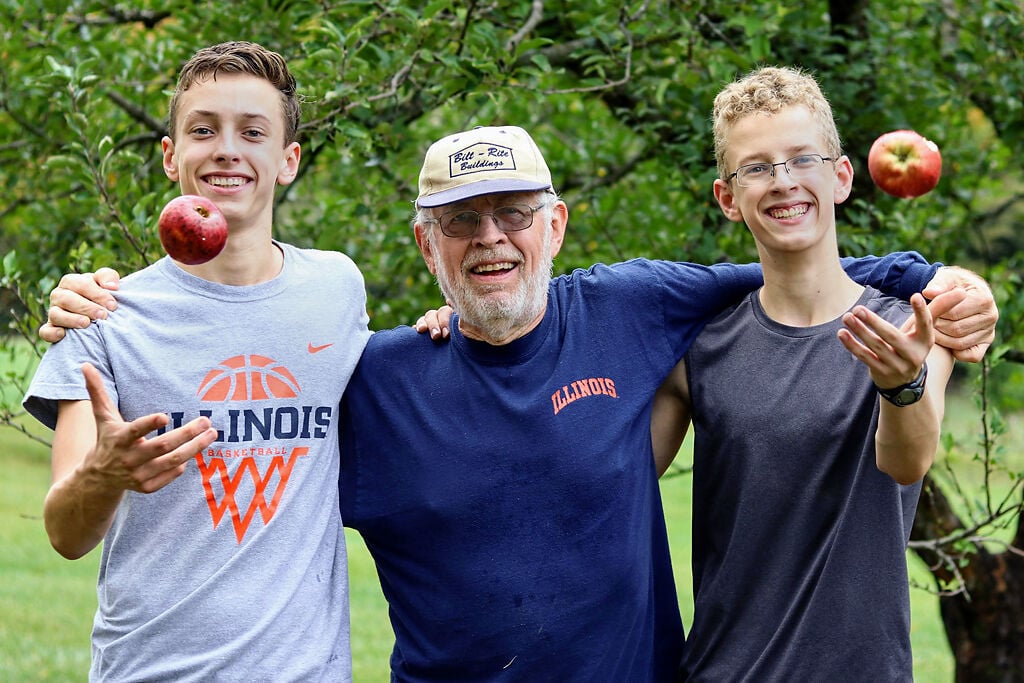 Gordon Brown with his Grandsons, Henry, left, and Sam Laufenberg in his apple orchard on his farm. 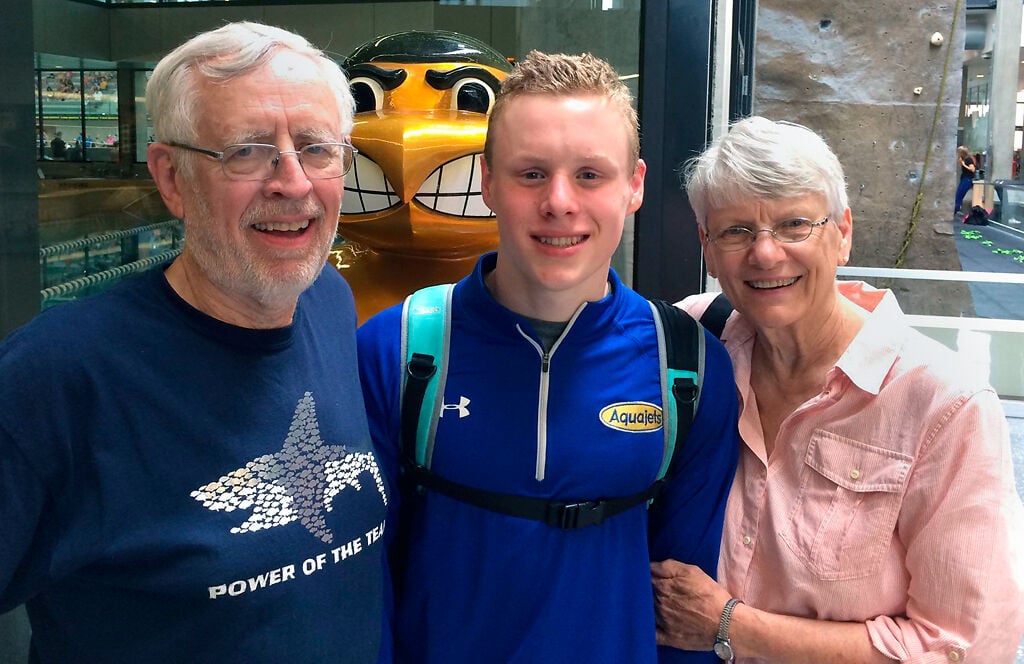 Granddaughter Eleanor Laufenberg, sings with her Papa, while granddaughter, Gwyneth Brown, looks on.

Gordon Brown with his Grandsons, Henry, left, and Sam Laufenberg in his apple orchard on his farm.

Sarah Laufenberg has a collection of dolls from all over the world, brought to her by her father, Gordon Brown. They’re souvenirs of the 27 countries he visited in his life’s mission to improve the world.

In his 30-year connection with MU, he brought new perspectives to the Department of Health Management and Informatics, said Patricia Alafaireet, director of applied health informatics.

He served as an officer in the Army from 1962–65, and also worked as a federal compliance officer for the federal government during the summer of 1966. He also worked with the World Health Organization for two years from 1970-72 in Cali, Colombia.

In 1972, he accepted a faculty position at Penn State University before coming to MU in 1979.

“He was an avid reader, and enjoyed exploring emerging concepts and extracting those that he thought could applied to his particular field,” Laufenberg said.

In his 80s, he still attended a weekly book group meeting with contemporaries at the Trinity Presbyterian Church, Laufenberg said.

His attraction to new ideas made him an excellent problem solver, Laufenberg said.

For example, when he was chair of the Department of Health Management and Informatics, one of his biggest challenges was budgetary, Hicks said.

Brown successfully set up a consultant group with the faculty. The group helped local health care organizations do community surveys to learn the characteristics of the populations in their service areas and a variety of other service projects for community organizations. The consultant project generated revenue for the department, helping to ease the financial strain. It also provided important services to local communities.

Saunders said Brown liked to play “the what if” game.

One of his ideas was making the Golden K Kiwanis club a partner with the Center for Urban Agriculture.

Brown had recently worked with Saunders on a home garden mentoring program, coming up with ways to help older farmers or people in agriculture pass their knowledge on to younger generations.

His daughter remembers the energy her father put into the family farm just outside of Columbia when he came home after work.

“My father wouldn’t plop down on the sofa after work,” she said. “He would do whatever needed to be done on his farm with my mom, taking care of things such as moving cattle, mending fences, mowing our 5-acre yard or cutting wood.”

She said her parents often worked until after dark. But they loved it, she said.

Brian Hensel, assistant teaching professor and alumnus of the MU Health Management and Informatics program, is a former student and a good friend of Brown.

He said Brown made a fundamental and positive difference in his career, encouraging him to maintain a focus in health administration. After Hensel completed his doctorate, Brown helped him get accepted into a postdoctoral fellowship at MU that would build on his experience and training.

“I believe this was critical in enabling me to do something I love to do, which is teaching in health administration,” Hensel said.

Alafaireet, also a former student of Brown, said she once saw him stand up and talk about important theories for four hours without a pause.

“Well, he didn’t always do that to us because we all got tired,” Alafaireet said. But his ability to summon all his knowledge in that way impressed her.

Brown’s work as a federal compliance officer took him to the Deep South in 1966. His job was to enforce the Civil Rights Act of 1965 and identify hospitals that weren’t complying with integration mandates and making such hospitals did not receive Medicare funding, Laufenberg said.

It was this early experience in his adulthood that made him realize the importance of treating people equally and with dignity.

Traveling was an important part of his life. He worked in 27 countries and visited 45, including many developing countries, helping to improve health systems.

In the last 10 years of his life, he participated in a teaching program in Saudi Arabia where he insisted that his classes include women.

“There are other universities that are doing these international programs at that time, but some of them are entirely composed of men,” Laufenberg said. She said she was proud of her father for seeing an opportunity to promote gender equity there.

After his diagnosis, Laufenberg and her two brothers took turns staying with their parents and helping with health care logistics and the farm. He is survived by his wife, Kathleen Brown, of 53 years. He is also survived by his brothers Gary, James and Jerald Brown.

Laufenberg, who is a founding member of Academy High, an independent high school in Champaign, Ill., said she learned a lot from her father. “He taught me the importance of learning and education, the importance of hard work, and probably most importantly, the importance of treating everyone with kindness and consideration and love.”

Gordon served for 30 years as MU professor and chairman of the Department of Health Management and Informatics.