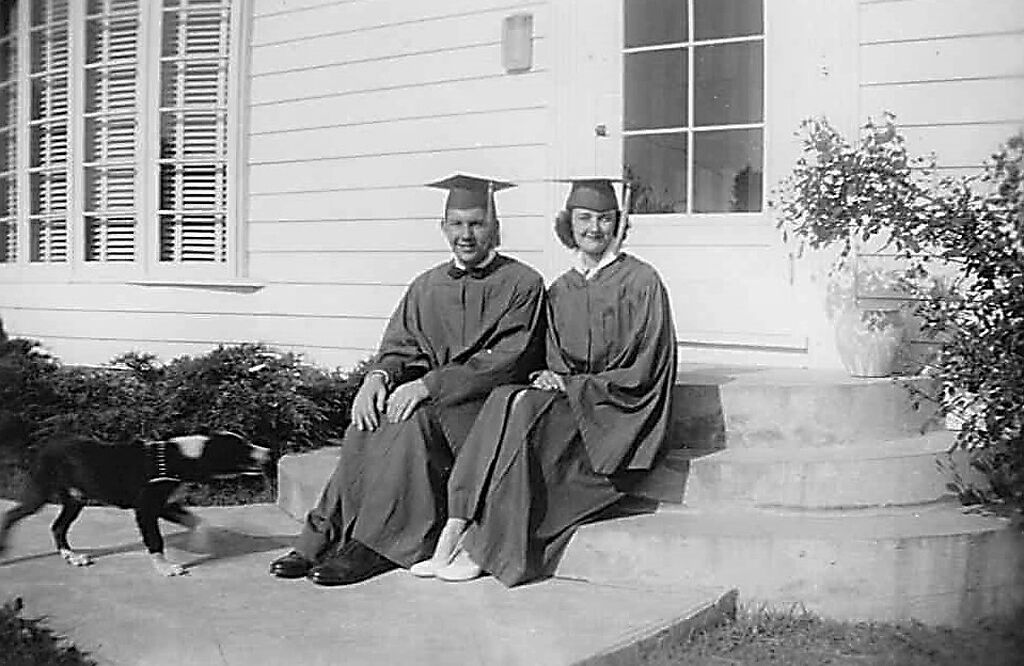 Linda and Tom Atkins pose on Hickman High School graduation day in 1952. They met in kindergarten, began dating in 9th grade and married in 1956. 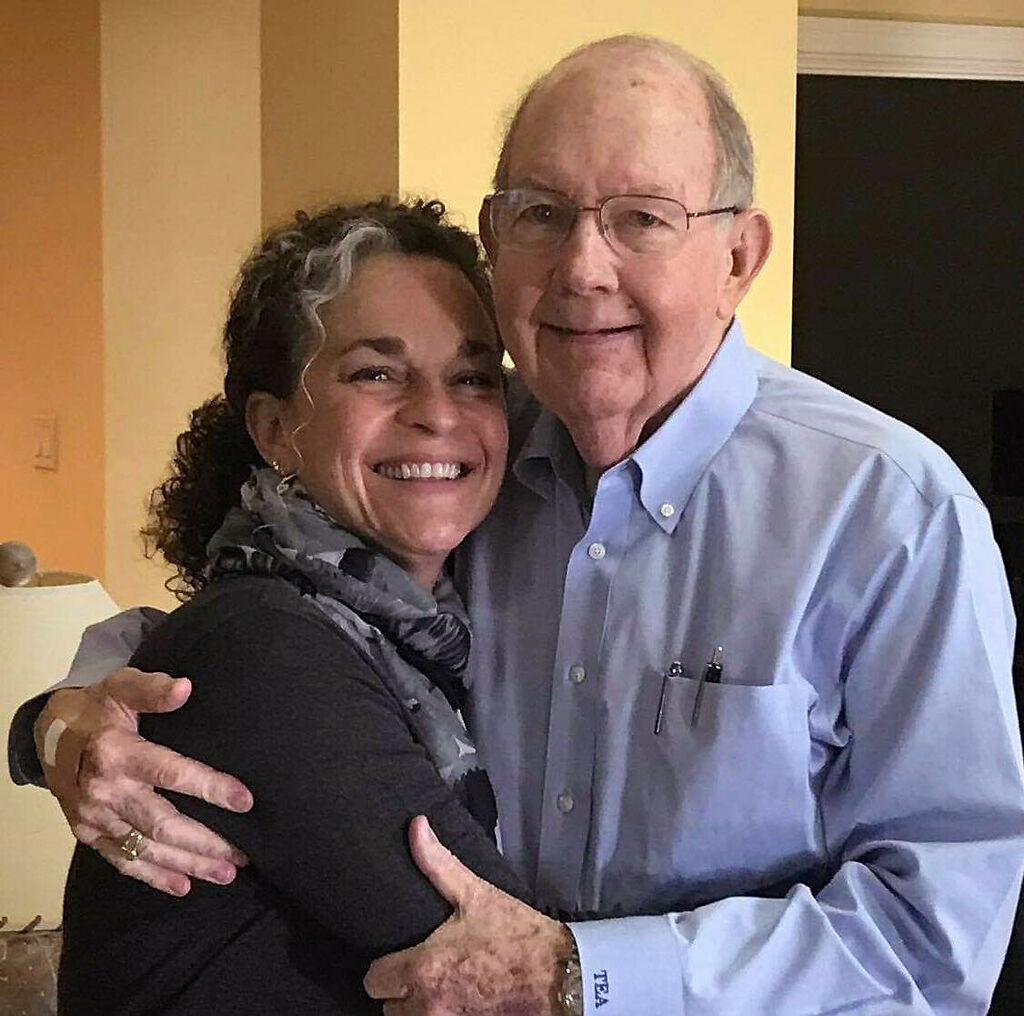 Tom Atkins and his daughter Mindy hug during Thanksgiving in 2017. 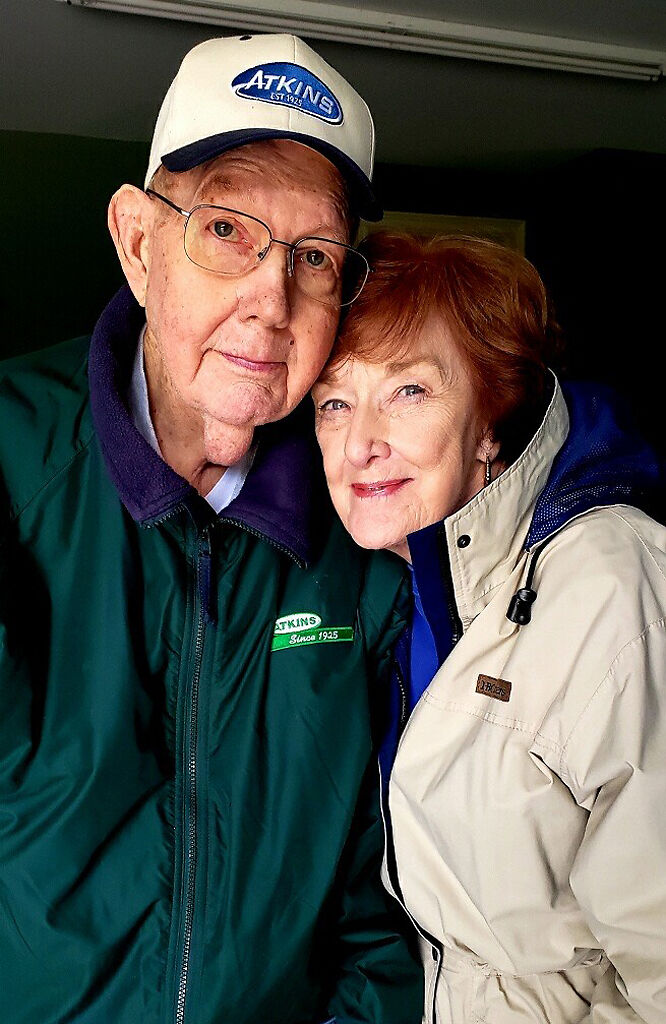 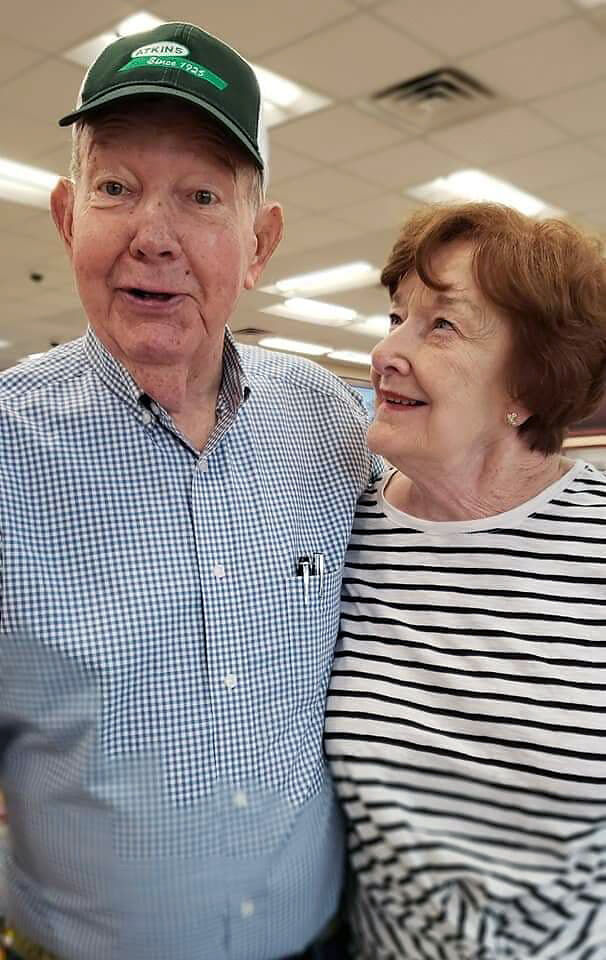 Tom and Linda Atkins pose on their 63nd wedding anniversary in 2019. Tom, in his usual form, is seen telling a story. 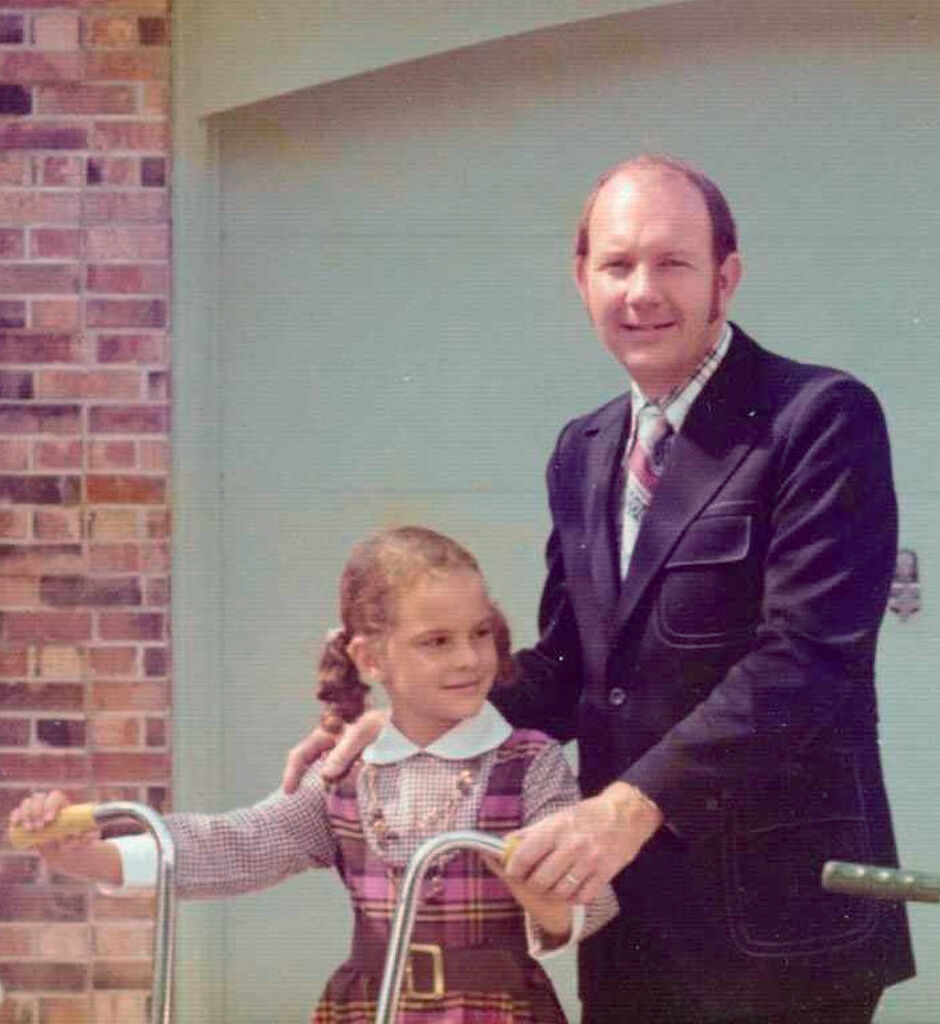 Tom Atkins, in his suit and ready for work, enjoys some time with his daughter, Mindy Atkins Wickersham, in the early 1970s at their home. 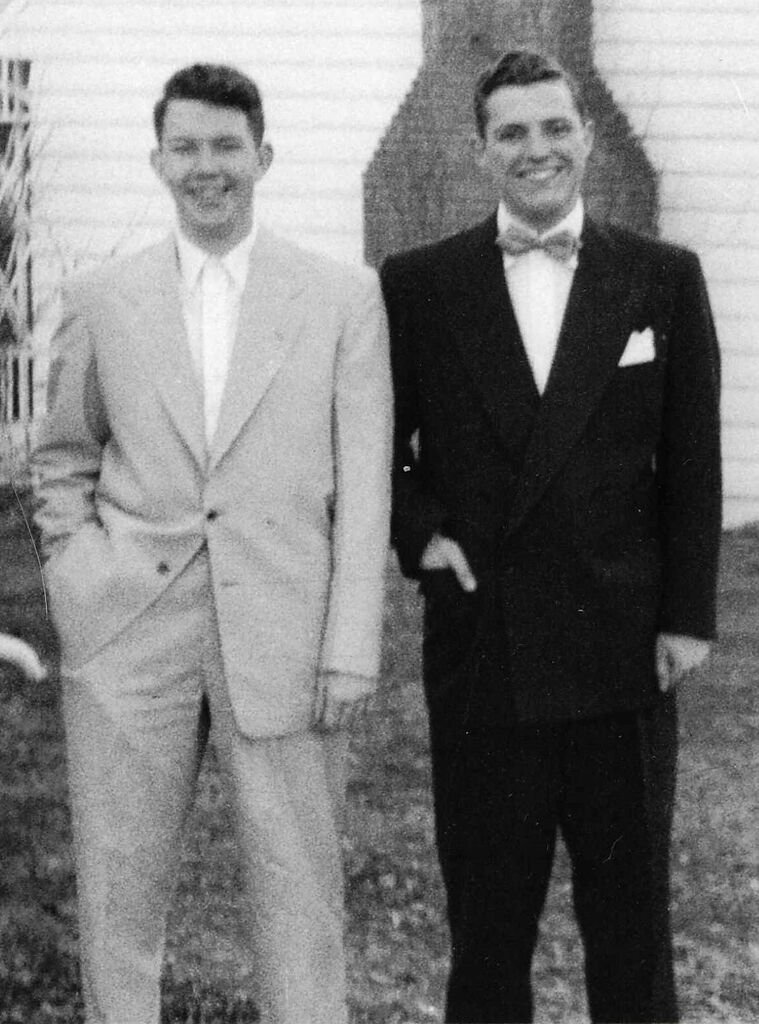 Tom Atkins poses with his cousin Jerry McCauley. They were 10 days apart in age and developed a lifelong friendship.

Linda and Tom Atkins pose on Hickman High School graduation day in 1952. They met in kindergarten, began dating in 9th grade and married in 1956.

Tom Atkins and his daughter Mindy hug during Thanksgiving in 2017.

Tom and Linda Atkins pose on their 63nd wedding anniversary in 2019. Tom, in his usual form, is seen telling a story.

Tom Atkins, in his suit and ready for work, enjoys some time with his daughter, Mindy Atkins Wickersham, in the early 1970s at their home.

Tom Atkins poses with his cousin Jerry McCauley. They were 10 days apart in age and developed a lifelong friendship.

Tom Atkins was a man who, through his work ethic, magnanimous philanthropy, imagination and thoughtful heart, encouraged his family and others to “go bigger.”

His daughter, Mindy Atkins Wickersham, said both her parents encouraged her to “go see the world, go experience other cultures and other people and other environments. That was a repetitive theme.”

Her father, she said, would often say, ‘Go get bigger. Go get bigger than you are right now.”

Mr. Atkins grew up in Boone County and Columbia, attended Hickman High School and later studied business at MU. While in college, Mr. Atkins joined Phi Delta Theta fraternity, where he formed lifelong friendships and made an impact on younger fraternity members.

Jim Carney was a freshman when he joined the fraternity and met Mr. Atkins, who was a junior at the time.

“I was very impressed with him because, as a freshman, your eyes are wide open,” Carney said. “You don’t really know much about what’s happening, but when somebody appeals to you, is a very nice person and takes an interest in you personally, it impresses you.”

After college, Mr. Atkins pursued a life of entrepreneurship, working for his family’s business, now known as Atkins Building Services and Products, and advising friends and peers in their business ventures. As a businessman, Atkins was a visionary. He was able to conceptualize big ideas and see them through.

His son, Scott Atkins, said his father “liked pushing things to the limit, intellectually and ideawise.”

“He was a big idea guy, meaning he’d come up with a big idea and it would be hard to accomplish, but he wasn’t afraid to talk about it and try to get there,” Scott Atkins said.

Mr. Atkins had a strong work ethic and attitude that allowed him to get stuff done. He led with dignity and respected those he worked with.

“He was really good about leading people,” Scott Atkins said. “He’s very good about giving other people credit and not necessarily taking credit.”

“I don’t think he wanted to succeed at your expense,” he said. “Tom felt that a good deal had to be good for both people.”

Mr. Atkins was deeply involved with the communities that shaped him. He made sure throughout his life to give back to Boone County, Columbia and MU.

Dave Griggs, who was active with Mr. Atkins in Columbia Chamber of Commerce affairs and other ventures, said he was a “good friend.”

Griggs said Columbia was so good to Mr. Atkins and his family and their businesses that “it was just natural” that he wanted to make the city a better place.

“And that, in Columbia, obviously involves the university ... It’s a critical asset in our community,” Griggs said. “He wanted to make sure it was strong and secure in the future. And that’s part of growing up here and really caring about our community.”

Mr. Atkins was a former chair of the UM System Board of Curators and, more recently, had been a prominent fundraiser and donor to MU’s NextGen Precision Health Institute.

Wickersham said her father would talk about how much MU, the city and the county had benefited him.

Mr. Atkins and his family donated 80 acres near the Central Missouri Events Center to the county and the city for the development of what is now Thomas E. “Country” Atkins Jr. Memorial Park, home to several baseball fields.

Aside from the work he did for the community and his business, Mr. Atkins made sure to dedicate time, energy and love to his family. Atkins’ friend Roy Eichelberger said he admired Mr. Atkins love for his wife, Linda Atkins, and their two children.

Mr. Atkins made it a point to invest and express genuine interest in the lives of people he met. Wickersham said he often reminded his children to “invest yourself in another person’s story.”

Tom led a long and influential life in Columbia and Boone County and was considered a pillar of this community.