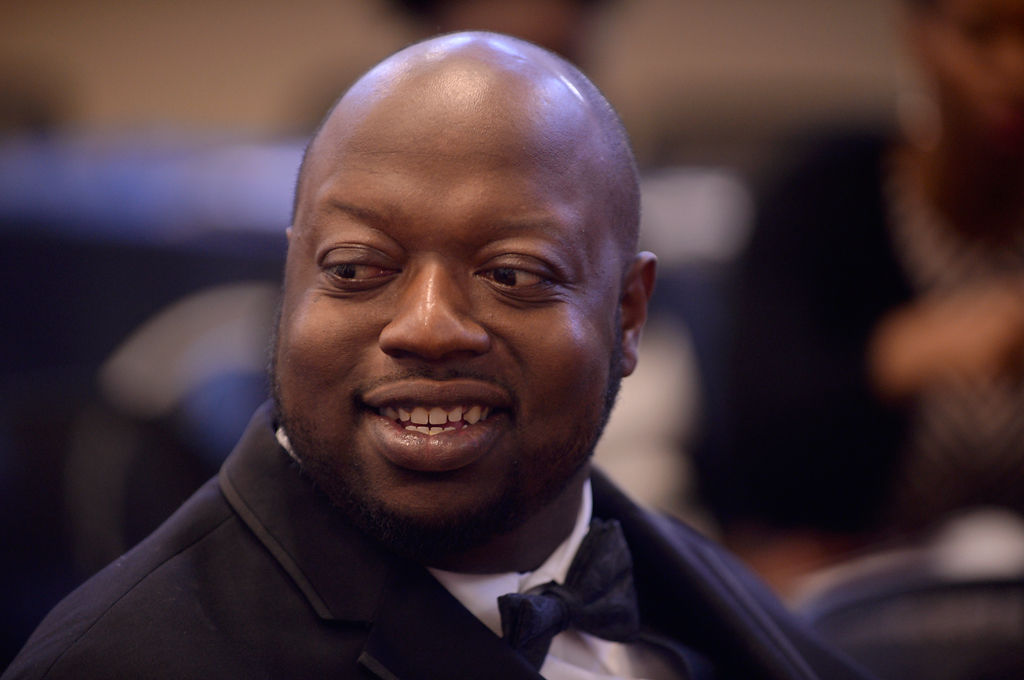 Kentrell Minton talks to Sherman Brown on Feb. 6, 2016, during Youth Empowerment Zone’s Black Men Rock, an event awarding Black men for their leadership in the community. Minton won the R.E.A.L Humanitarian Award based on his work with the Everybody Eats program, which was originally started by Almeta Crayton, who died Oct. 21, 2013. 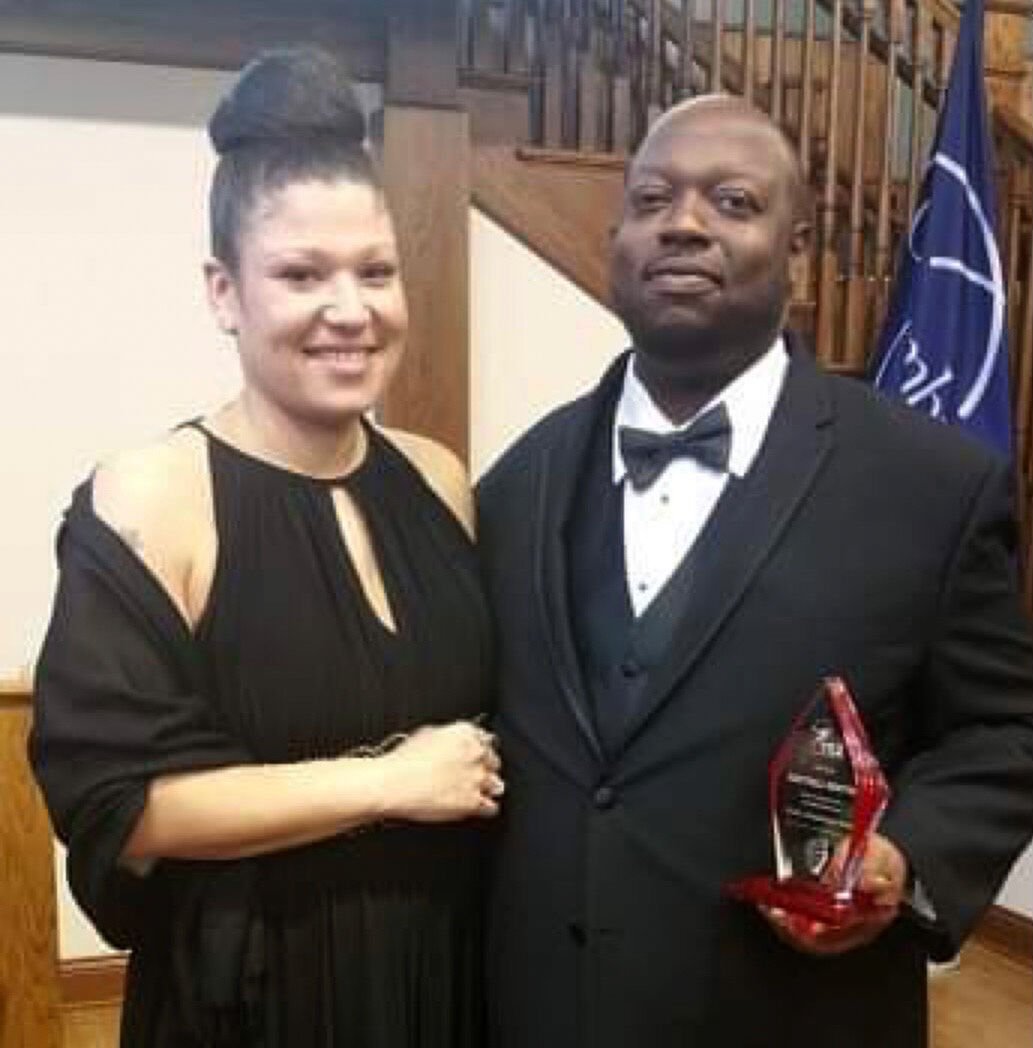 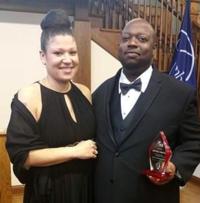 Kentrell Minton and his wife, Amber Minton at the Black Men Rock ceremony in 2016. 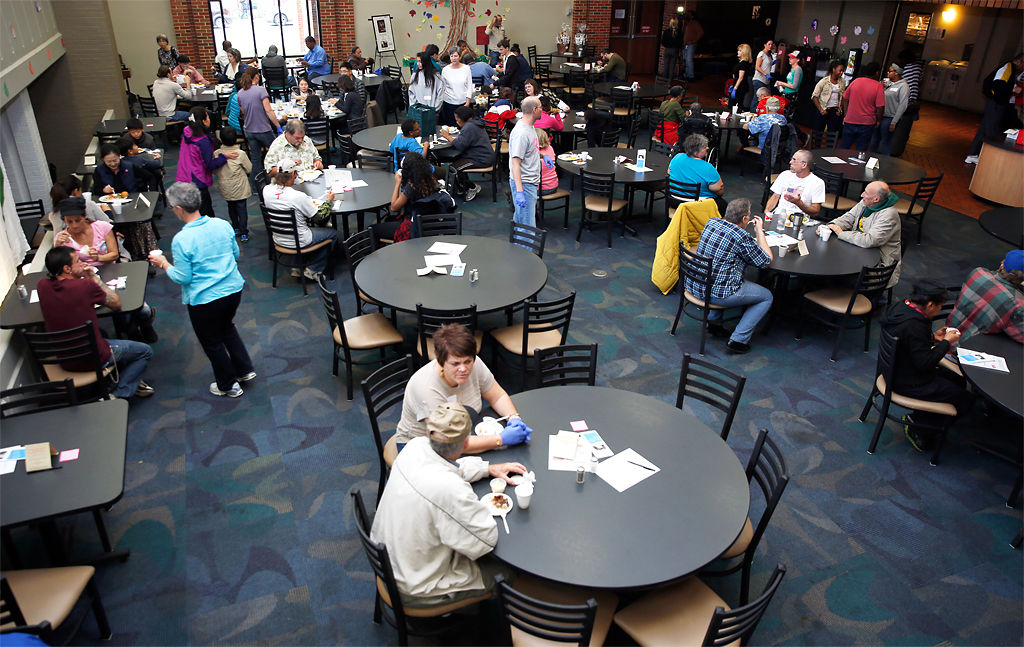 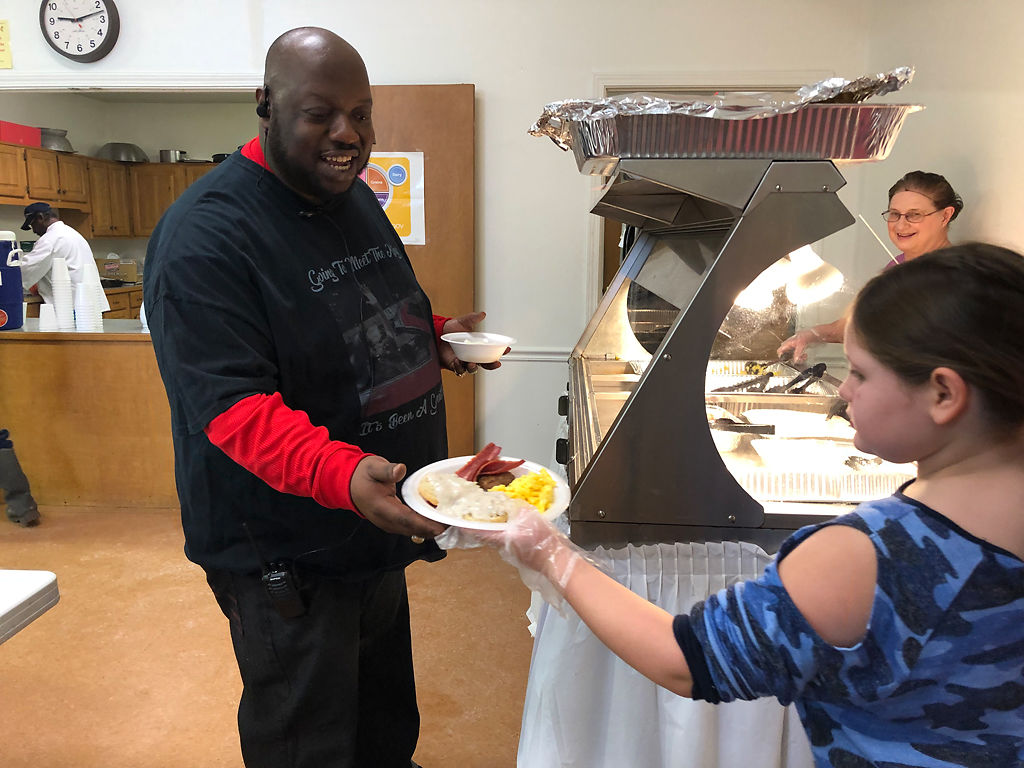 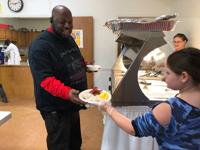 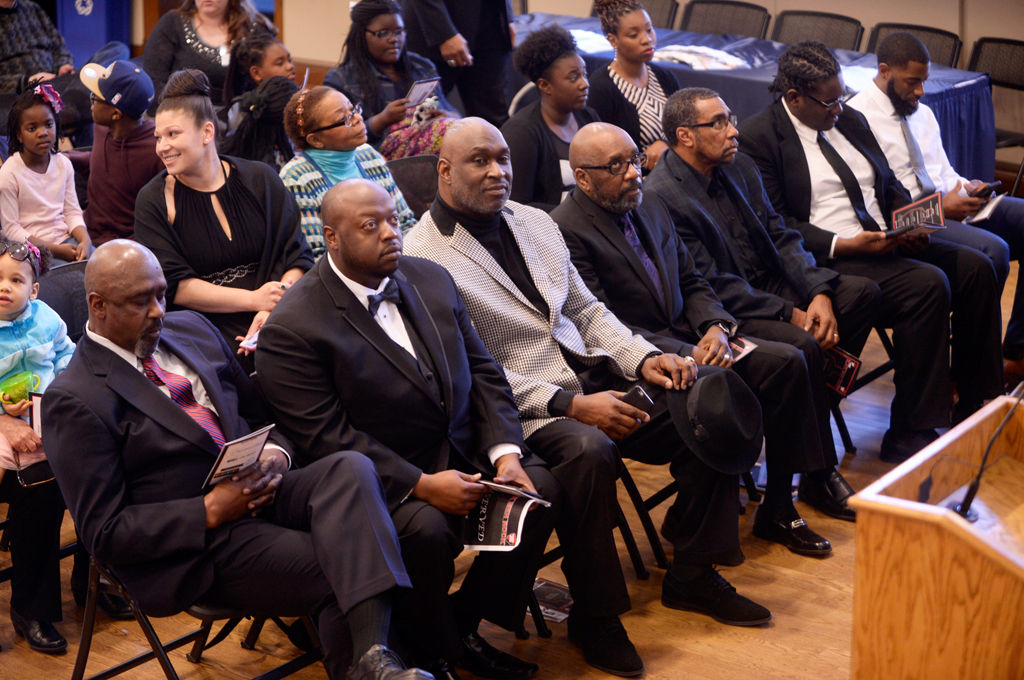 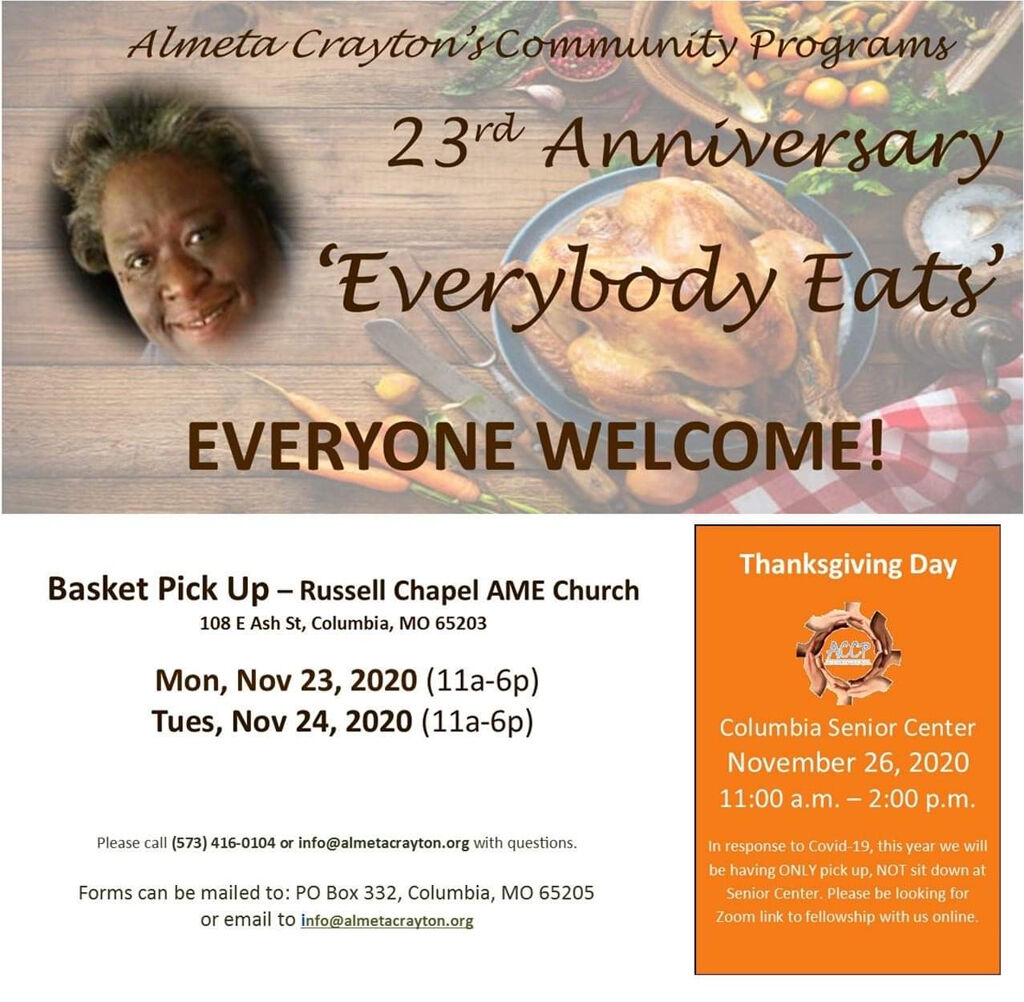 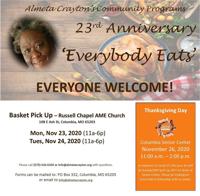 Almeta Crayton's Everybody Eats will continue this year, despite the pandemic. 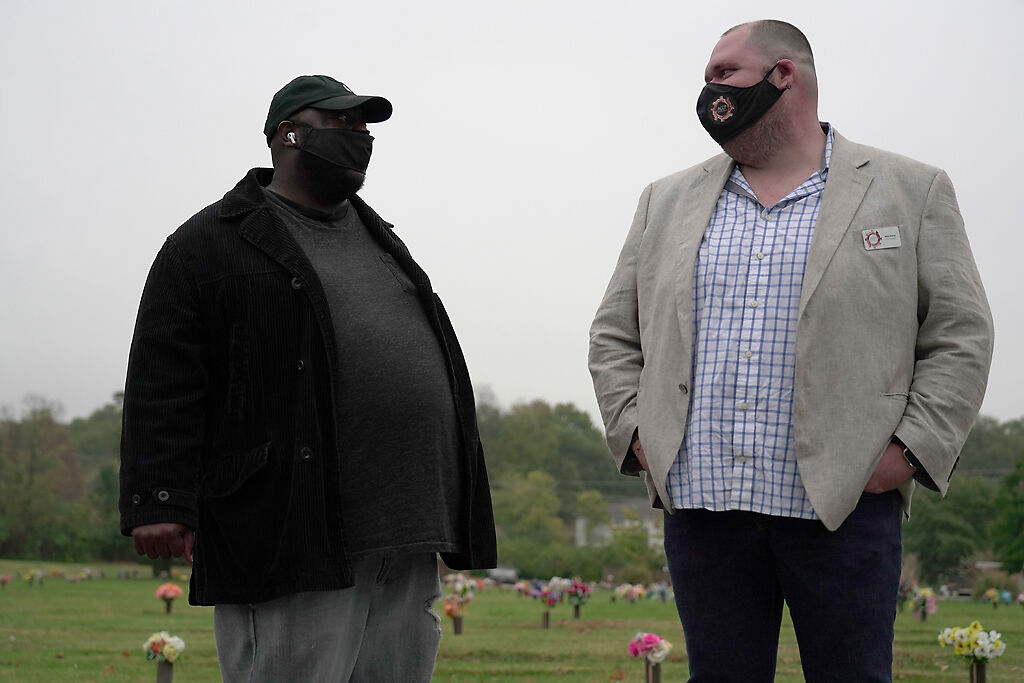 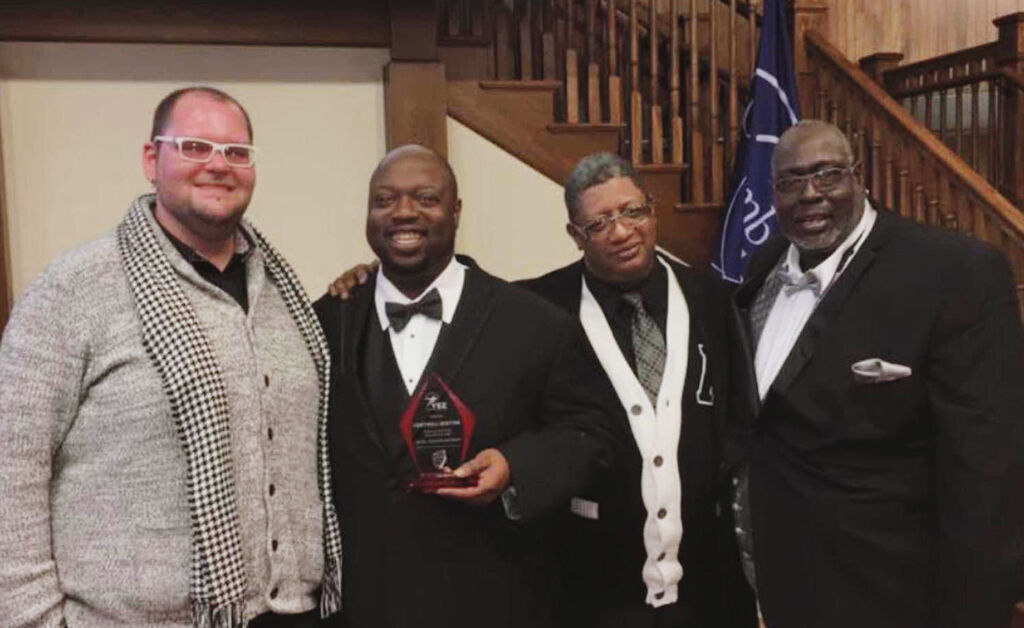 Kentrell Minton talks to Sherman Brown on Feb. 6, 2016, during Youth Empowerment Zone’s Black Men Rock, an event awarding Black men for their leadership in the community. Minton won the R.E.A.L Humanitarian Award based on his work with the Everybody Eats program, which was originally started by Almeta Crayton, who died Oct. 21, 2013.

Kentrell Minton and his wife, Amber Minton at the Black Men Rock ceremony in 2016.

Kentrell Minton loved his community. He spent his life serving others and could always be found with a smile on his face.

“He ran all day long, every day, to make sure that not only his family was OK, but that everybody was OK — the entire community,” said Nick Raines, vice president of Almeta Crayton’s Community Programs.

Minton was Raines’s best friend for over 15 years. They went to church together, and when Raines wanted to move out of his mother’s house after graduating high school, Minton welcomed him into his own home with open arms.

Minton was born in Memphis and moved to St. Louis in 1989. He moved with his family to Columbia in 2003. Minton died Wednesday, Nov. 11, at age 37, due to health complications and a bad heart.

Minton met Almeta Crayton, a family friend and former First Ward councilwoman, in St. Louis when he was eight years old. Minton was Crayton’s godson and worked closely with her in Columbia.

“He would just make sure at the end of it to say that we have it; we got it,” Lynn said. “There were families depending on us and (we) were going to figure it out.”

Lynn said Minton knew people across the nation, and that his legacy extends much further than just Columbia.

A believer in helping others no matter what, Minton represented the kind of activism that involved working directly with the people he was helping.

Because of Minton’s grassroots activism, Raines said his best friend would have hated being seen as a saint or someone “above” his community. He wants to ensure people remember Minton as the complex person that he was.

“Kentrell was a light and a guide for the future of this community, but he was also a person,” Raines said. “He was a man, and he was human, not without his flaws.”

Ansur Adams, Almeta Crayton’s Community Programs director of community programs, said Minton helped put him through school. Adams recently graduated with a master’s degree and became provisionally licensed as a professional counselor, which he credits in part to Minton’s support.

Minton received the Humanitarian Award from Black Men Rock in 2016.

Adams was at the ceremony and says he will always remember the event.

Minton was passionate about making Columbia safer for everyone, particularly Black youth who are subject to gun violence.

“Kentrell recently had a meeting with Brian Treece, because it seems that the city’s focus is not on the young people, and especially the young black community,” Raines said. “Shootings are still happening, and one of the main things that he was working on, aside from Everybody Eats, was trying to take the guns off the streets.”

After a shooting at Volunteer Drive on the Fourth of July, Minton spoke at a vigil.

Adams said Minton told local teenagers to bring them his guns and talk with him, without repercussions — and one young man did. In the following days, Adams said, Minton got at least 15 other guns out of the hands of youths.

Raines said his friend’s efforts really made a difference.

“For a couple of months, we did see a shooting every weekend (and) we had young people dying,” Raines said. “Kentrell stopped that for a minute by stepping up.”

“This program was slated to grab those disenfranchised youth and employ them in businesses that Kentrell set up, so they can have the opportunity to be habituated to the mainstream,” Adams said. “Because for many of these youth, their demeanor and carriage kind of excludes them early in the interview process.”

A legacy for the ages

Minton knew and loved virtually everyone in Columbia. From top community leaders to everyday citizens, he made it clear that he cared for everyone around him, regardless of who they were.

“He didn’t just know the people in the community that wanted to give; he was the conduit,” Raines said. “Anybody could come to him.”

Minton’s death has left a void in the lives of many people.

“I don’t know what Columbia, Missouri, is going to do in his absence,” Adams said.

Nonetheless, Minton’s friends and family hope to carry on his efforts through Almeta Crayton’s Community Programs.

Everybody Eats — even in a pandemic

Almeta Crayton’s Everybody Eats began in 1997 and occurs annually. Minton’s family considered canceling this year’s event following his death but decided to uphold the program in support of the community.

It will look a little different this year to accommodate for social distancing, but Lynn said it’s important to ensure local families are able to eat on Thanksgiving.

Community members can fill out applications for Thanksgiving baskets Tuesday and Wednesday at Moser’s Foods, located at 705 Business Loop 70 West. The applications can be dropped off between noon and 5 p.m. each day.

Baskets will be available for pickup at Russell Chapel from 11 a.m. to 6 p.m. Nov. 23 and 24. The baskets will include donated turkeys and sides for families to take home and cook.

Lynn said that because of the pandemic, many Columbia residents are isolating and cannot get together with their families. More people are out of work or living in homeless shelters, too, so Lynn said Almeta Crayton’s Community Programs is creating a substantially larger number of baskets than in previous years.

Lynn said a meal will be provided at the Columbia Senior Center on Thanksgiving Day, but people must take their food to go.

Almeta Crayton’s Everybody Eats also includes a fellowship session for conversation with other attendees. This year, the fellowship will be held on Zoom, allowing Almeta Crayton’s Community Programs to “go into different homes,” Lynn said.

“It was going to be talking about Miss Almeta, but now we will be including memories of Kentrell and Miss Almeta,” Lynn said.

Community members are also invited to share talents — anything from piano to poetry — on Zoom between 11 a.m. and 2 p.m. on Thanksgiving.