We need more drinking fountains, hand-washing stations and public toilets in Columbia’s downtown, a large portion of which is called “The District.” The American Rescue Act, of which Columbia will receive $25 million, is specifically targeted to address both public health and water and sewage infrastructure problems. Public hygiene fits in each category. While the mayor’s mention of “public restrooms and showers,” along with several other needs, in a category with a proposed $1 million allocation is promising, I propose that the City Council allocate about $150,000 to specifically improve public hygiene facilities.

The only public drinking fountains in the District are at Douglass Park and Flat Branch Park. The two fountains in Flat Branch do not operate 12 months a year. There are no hand-washing stations downtown. During the pandemic, CDC recommended increased handwashing — but that’s easy to do.

There are no permanent public toilets open seven days a week downtown. There is a rather unsightly port-a-potty on Fourth Street in front of Flat Branch Park. There are also two port-a-potties behind Wabash Station that are locked when buses are not running. I’ve been told this is because Wabash Station is in part funded by a federal grant so it can be used only for “transportation.”

Even before the pandemic disrupted normal business, educational and social activities, public hygiene facilities have long been under-discussed and under-provided in American cities. I became aware of the lack of water and sanitation needs downtown after I retired from MU about seven years ago. Before then, I always had my MU office key when my family needed to use the restroom at a parade, or attending Earth Day, or when I was biking. If you don’t have a key to an office building on a weekend or evening, it can turn into a painful experience.

Over the past decade, I have become more aware of the needs of our homeless and senior citizens. It is estimated that one out of three citizens is hesitant to go out because of bathroom insecurities.

America’s urban development is largely a collection of private merchants interspersed with public buildings that carry out legal and governing activities. Restrooms and drinking fountains are given minimal space back by the kitchen or janitor’s closet. Experienced pedestrians learn how to scout them out and slip in and out without drawing attention. But many Americans have unsatisfactory experiences in navigating the private hygiene system because (1) they face personal health challenges because of age or medical condition, (2) they have children whose hygiene needs often come on in an instant (3) they lack familiarity with the downtown area and (4) they are not seen as socially desirable and can’t quietly slip in and out with drawing attention. 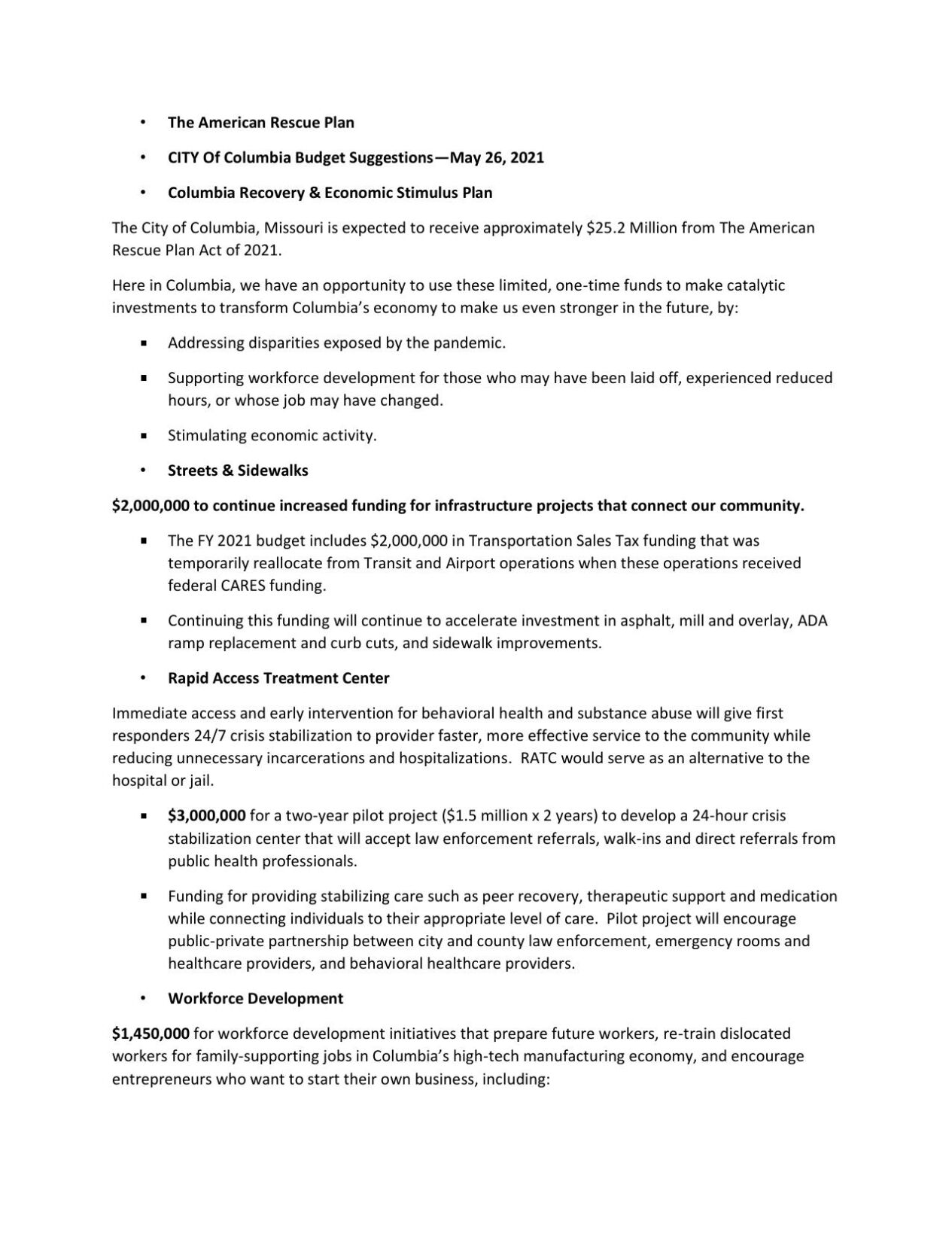 American Rescue Act funds should be allocated to improve the District’s public hygiene services. I propose the following:

1. Provide drinking fountains and hand-washing stations outside public buildings at the Armory, the Parks and Rec building, Wabash Station, the Boone County Courthouse complex and similar sites in the District. The least costly alternative would be to extend water pipes already existing in these buildings. Providing four drinking fountains and two water stations would cost less than $15, 000.

2. An MKT-quality toilet should be installed at the terminus of the city MKT Trail near Flat Branch Park. A similar toilet is being installed in A. Perry Philips Park for $101,900. Such a toilet at Flat Branch Park should be less costly because there is already electricity, water and sewage.

While a more central location, such as the Armory or the police station, would be desirable, the Department of Parks and Recreation is experienced at providing public restrooms. Additionally, the new Gateway Plaza project is certain to increase demand for restrooms.

3. Future city construction, including a homeless shelter, or Opportunity Campus, and other public buildings, should include external public hygiene facilities.

For the long term, I request that the city manager and Department of Public Works do a comprehensive review of public hygiene needs downtown and become aware of the new technologies for addressing such needs.

I am a pragmatic, realistic incrementalist. While I can reimagine urban spaces with pedestrian malls and fountains, quiet streets, mental health clinics and full-time homeless services, they will take time and money to achieve. It is better to light one candle than to curse the darkness. Four drinking fountains, two hand-washing stations and one public restroom will not solve senior citizens’ health challenges and isolation or homelessness, but for less than $150,000 they will address the hygiene needs of many Columbians while they are in The District.

About opinions in the Missourian: The Missourian’s Opinion section is a public forum for the discussion of ideas. The views presented in this piece are those of the author and do not necessarily reflect the views of the Missourian or the University of Missouri. If you would like to contribute to the Opinion page with a response or an original topic of your own, visit our submission form.

About the opinion page

The Missourian’s Opinion section is a public forum for the discussion of ideas. The views presented in this piece are those of the author and do not necessarily reflect the views of the Missourian or the University of Missouri. If you would like to contribute to the Opinion page with a response or an original topic of your own, visit our submission form.

Guest commentaries are longer pieces, up to 700 words, and must be signed by the author.

All submissions must meet the editorial standards of the Columbia Missourian and will be verified for accuracy.

Submit a Letter to the Editor