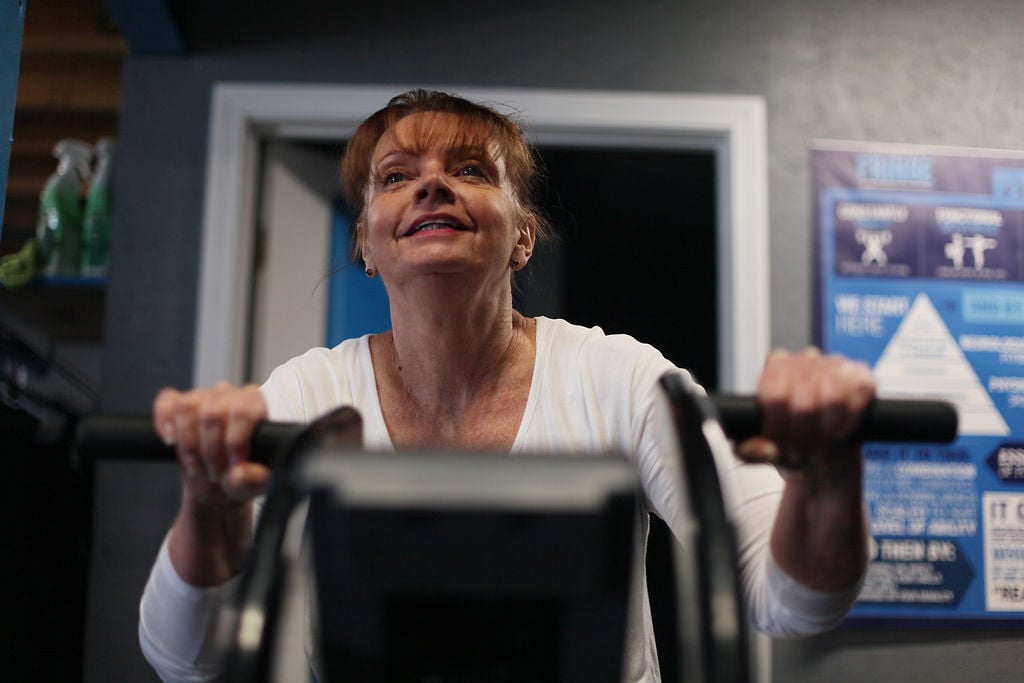 Susan Jones, 59, warms up on a stationary bike in the Vitality class at CrossFit Fringe. Jones was intimidated by CrossFit at first due to her age, but the Vitality class, specifically designed for ages 50 plus, was a perfect fit that made her feel welcome. 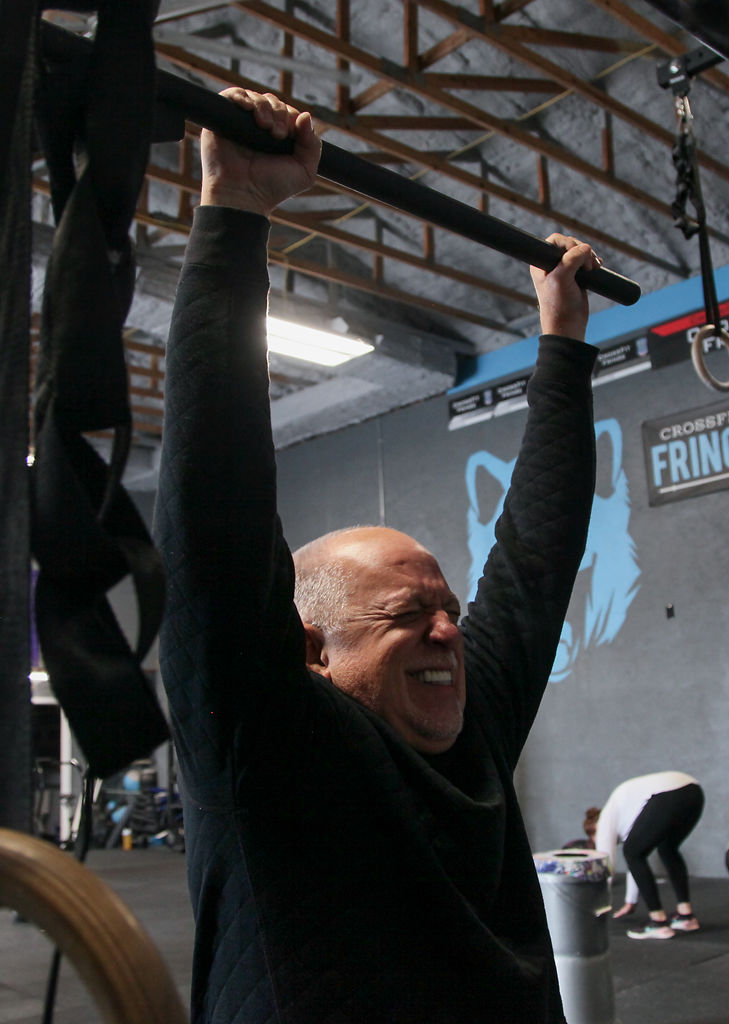 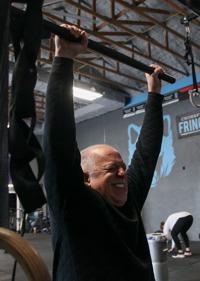 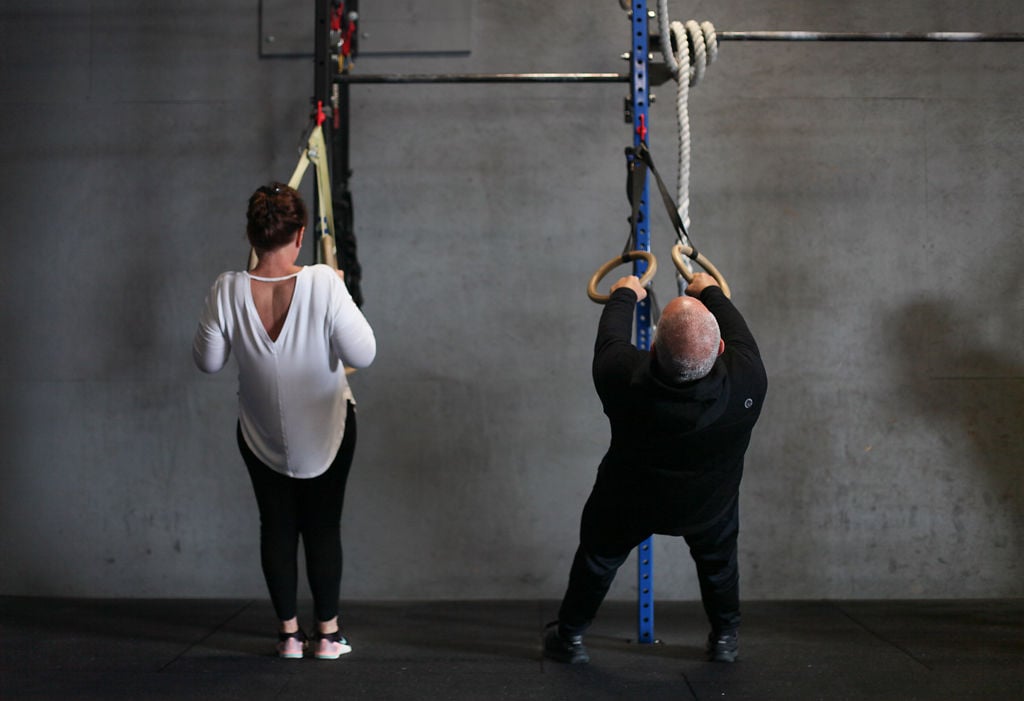 Susan Jones and Lance Winkler use the rings.

Susan Jones, 59, warms up on a stationary bike in the Vitality class at CrossFit Fringe. Jones was intimidated by CrossFit at first due to her age, but the Vitality class, specifically designed for ages 50 plus, was a perfect fit that made her feel welcome.

Susan Jones and Lance Winkler use the rings.

Classic rock blares from the gym as a class of 10 marches through their interval rotations — biking, rowing, dumbbells, burpee pull-ups and weighted squats.

The only thing unusual about this CrossFit gym, called a “box,” are the athletes.

At CrossFit Fringe on Old 63, the Vitality program is geared toward people like Susan Jones and her husband Lance Winkler, both over 50. The grueling Vitality workout is designed to improve mobility, balance, agility, strength and confidence.

“We like to call it the fatality program,” Jones, 59, joked.

Recently, intense workouts like CrossFit have been shown to have significant benefits at the cellular level for older adults.

A study completed by the Mayo Clinic and published in Cell Metabolism in March 2017 shows the benefits of such exercise.

Several studies have shown that a few minutes of strenuous intervals improve aerobic fitness and other aspects of health as much as hours of jogging or moderate bicycle riding, according to the New York Times.

Since beginning CrossFit, Jones said she is able to climb basketball bleachers and football stadium steps without difficulty and carry two arms full of grocery bags up into her home. Tasks that once seemed difficult, or may be difficult for others her age, no longer are.

Jones began CrossFit about 18 months ago. She worked out three days a week, while her husband joined her one day a week and golfed on the other days.

Now, she and Winkler take a CrossFit class for an hour four times a week and walk for an hour, either in the mall or on the trail depending on the weather.

“I couldn’t let her get in shape without me getting in shape,” Winkler, 66, said. “Golfing and drinking beer afterward didn’t have the same effect.”

Jones said the workouts are much more intense than the weight circuit they used to do.

“[I] hadn’t ever done anything that vigorous,” Winkler said.

There is always an opportunity to scale back the exercises. However, the coaches, community and environment help Jones and Winkler keep pushing themselves.

Both say they have seen increases in their flexibility, among other more subtle changes.

For David Henderson, 51, interval training was “a crucial part” of his cycling training for a national championship he won in 2010.

Henderson’s competitive cycling has come in waves. He began riding competitively in 1988 and raced until 2000. He stopped for six years to be a stay-at-home dad, then resumed cycling in order to compete.

His interval regime was conducted on a stationary bike and included about six repetitions of one-minute maximum effort followed by a three-minuterest.

“After that [you’re] pretty much toast,” Henderson said.

Besides an increase in strength, speed and recovery, the structured intervals of high intensity make it possible to increase the maximum amount of oxygen used during the workout by a significant 10 to 15 percent.

Henderson is not doing interval training at the moment because the purpose of that type of training is to compete.

For John H. Schulz, 61, the motivation to take running from recreational to competitive came through a dare.

Back in 1996, after a buddy said he couldn’t run a marathon, Schulz trained and ran the Heart of America Marathon in Columbia.

Though Schulz had run cross country in high school on the junior varsity squad, he started to take it more seriously in 1990 after promising his wife he would stop chewing tobacco. Six years later he ran his first marathon.

Schulz, a doctoral student studying the human dimensions of natural resources at MU, runs 5 to 6 miles five days a week, takes a long run of 10 to 15 miles once a week and rests one day a week, substituting with an activity such as cycling.

“If I can keep a pace of 27-30 miles per week year round, I can bump it up and be ready for a marathon in two or three months,” Schulz said.

He has run 52 marathons since 1996. He’s raced 20 times in the Heart of America Marathon now, but he hasn’t run another marathon since October 2017.

The last one was in Kansas City, four weeks after the 2017 Heart of America Marathon and six months after laser heart surgery.

Now, he just has to fight aches and pains, the “nagging parts of growing old,” he said.

Despite the pain that comes with age, Schulz said he notices a difference in fitness between some of his MU classmates and himself.

In addition to running, Schulz often bikes eight miles on way to school, weather permitting. It’s one reason that climbing three flights of stairs doesn’t faze him. He hopes to continue running into his 70s and 80s. 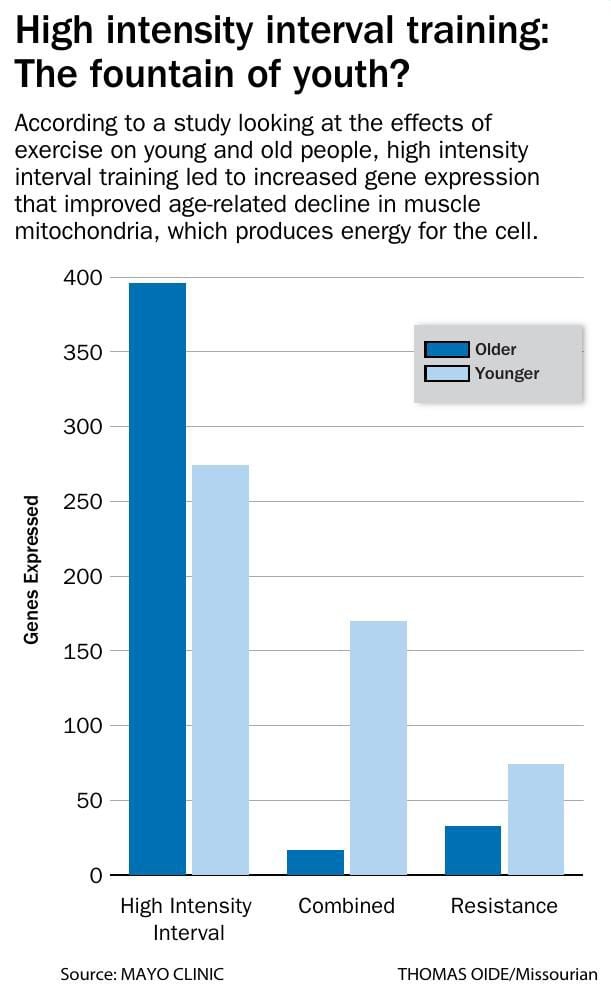