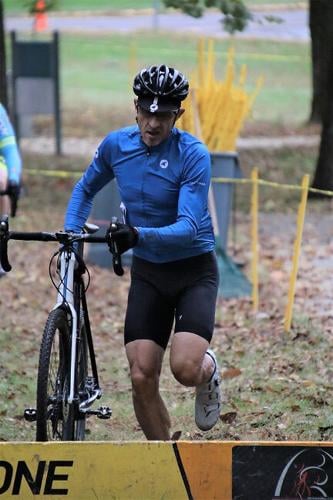 Scott Frey competes in his first cyclocross race last October in St. Louis, where he came in fifth place. 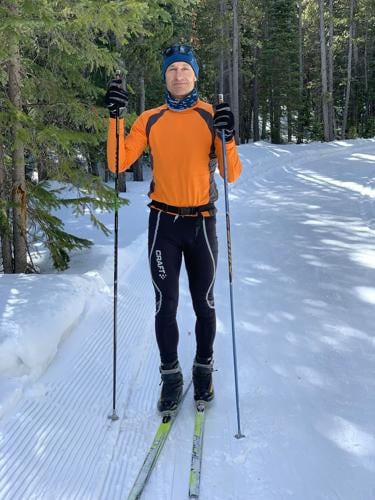 Scott Frey gets ready to ski Nederland, Colorado, in January. After a knee injury limited his activity, he’s returned to skiing.

Scott Frey competes in his first cyclocross race last October in St. Louis, where he came in fifth place.

Scott Frey gets ready to ski Nederland, Colorado, in January. After a knee injury limited his activity, he’s returned to skiing.

A previous version of this story misstated the location of Gettysburg College, which is located in Pennsylvania.

In upstate New York, a 16-year-old Scott Frey dropped out of high school to work long nights in restaurants and other off-hour jobs.

Barely scraping by, Frey and his mother were living on disability and Social Security checks, and he had to continue working to keep them afloat.

His mother had been diagnosed with multiple sclerosis and required his help with daily tasks.

Although he would confront other barriers to his education in money and time commitment, caring for his mother was the first. But it would ultimately lead him to a lifelong study of brain injury and disease.

Frey, 57, is now a professor of cognitive neuroscience at MU, where he also directs the Rehabilitation Neuroscience Laboratory.

Despite unfavorable odds, he achieved two Ivy League degrees along the way — a master’s degree in human development from Harvard and a Ph.D in experimental psychology from Cornell University.

Sensation, movement and the cognitive reorganization of functions are just a few of the subjects he has studied. His most recent work includes analysis of the transplant experience for those who have amputations.

There, he met an influential mentor and friend, John Rybash, who convinced him to study psychology at what is now Utica College in New York.

It was clear that Frey had potential, and he had already fallen in love with studies of the brain. When he was accepted into Harvard’s graduate program in 1987, he left Utica for Cambridge, Massachusetts. There, surrounded by academia and a depth of intellect, he was able to thrive.

“It was mind-blowing” he recalled.

And yet, life had other plans. Frey had to leave Harvard after getting his master’s degree to spend a year with his mother. The pace picked up again in 1989 when he was accepted by Cornell to study experimental psychology.

A few years later, while teaching at Gettysburg College in Pennsylvania, his neurological research on the brain began.

“This was really the turning point in my career,” he said.

While studying stroke patients, he invented tasks to objectively evaluate movement imagination in patients who experienced paralysis. He also became interested in research about brain injury and disease that could improve — and, in some cases recover — movement.

His life’s work has always carried remnants of his mother’s disease, however. In 1998, he received a grant to continue cognitive research and moved to New Hampshire to work with patients at Dartmouth College.

He then encountered one of the first Magnetic Resonance Imaging (MRI) machines and was able to use it to enhance his work. While in New Hampshire, he and his then-wife had two children, Louisa and George.

In 2004, he caught the attention of the University of Oregon and was recruited to work on brain injury patients for seven more years. Then one day he answered a call from MU.

The university was looking for a brain imaging director, so he brought his team and his grant money to central Missouri.

“I think I am most proud of the work I have done at MU,” he said.

Frey came to Missouri in 2011 with a mission in mind, and he has played a key role in fine-tuning its brain imaging program. He and his team helped round out the program with the knowledge and experience he had gained in Oregon and New Hampshire.

His research now includes studying the sensations and experiences of transplant patients and amputees. He has been looking at the regeneration of nerves and how amputees reorganize functions they lost.

However, Frey is looking to redirect his writing beyond academic research so that his work can “have an impact other than just medically.”

Frey said he wants his work and his story to empower, inspire and encourage youth and adults to continue striving for their goals.

His interest in endurance sports began in the 1990s and has paralleled his academic career.

Accomplishments include competing in the 100th Boston Marathon and coming in fifth in cyclocross in Missouri. Cyclocross is a non-Olympic sport that is a cross of road cycling, mountain biking and steeplechase, according to U.S. Cycling’s website.

He won a national age group championship in trail running at 45, but has since suffered from a knee injury that limited his running. He has also taken up endurance cycling.

“I’m looking to get back into cross-country skiing,” said Frey about his goals post-injury and always looking for new challenges.

Linda Lutz: How yoga became her path out of pain and despair

After being diagnosed with lupus, Lutz turned to yoga as a lifelong pursuit.