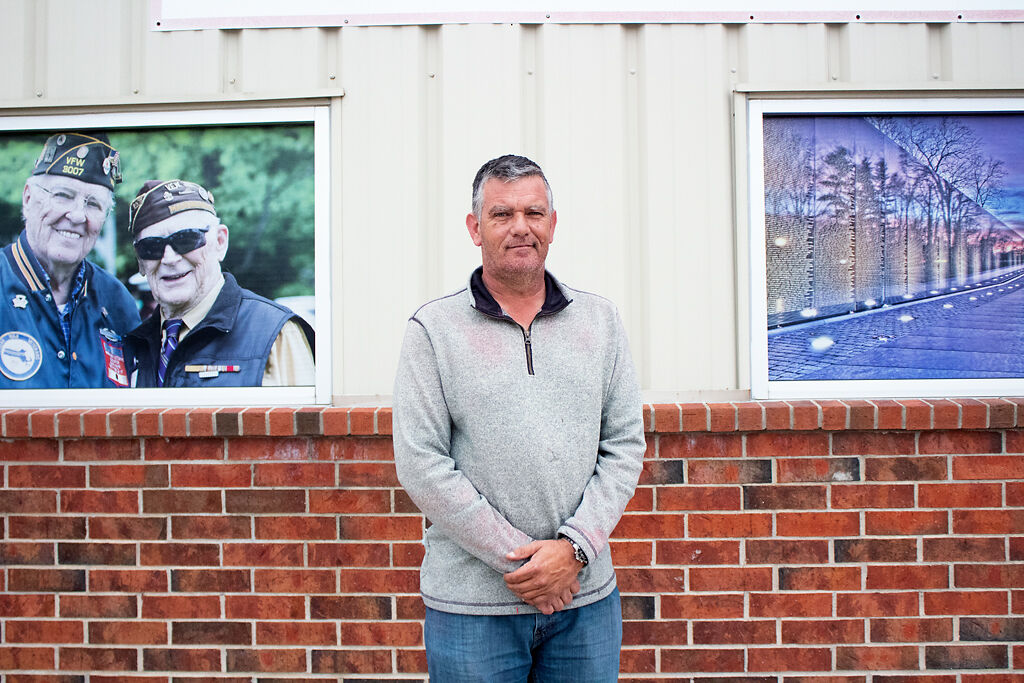 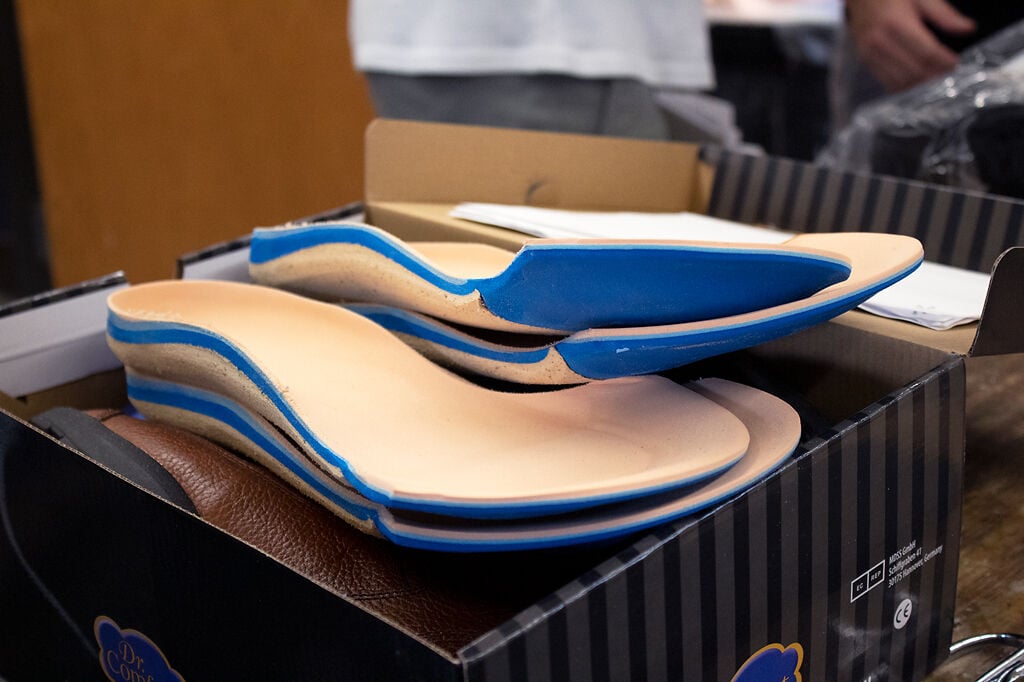 Newly made orthotic soles will be put in a customized shoe for patient use. 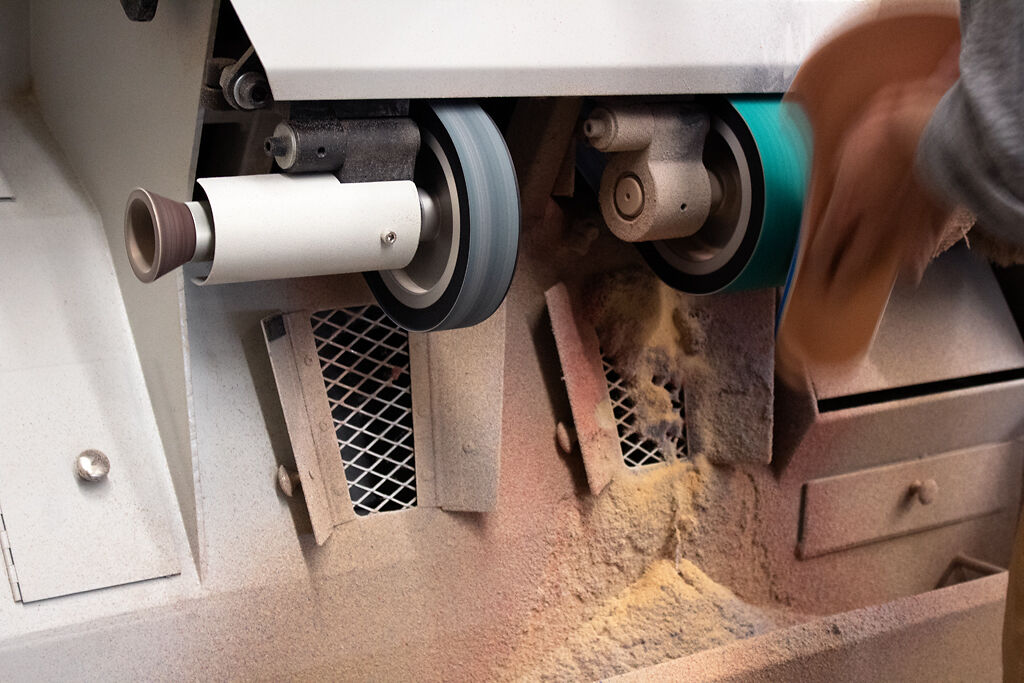 A machine in the back room of Daily Living Medical in Columbia is used to sand orthotic molds for customers.

Newly made orthotic soles will be put in a customized shoe for patient use.

A machine in the back room of Daily Living Medical in Columbia is used to sand orthotic molds for customers.

Kenneth Neighbors had worn orthotic shoe inserts since he was a teenager to treat a condition known as flat feet.

After an orthotic worker made an insert and let Neighbors watch the process, he realized he had the same materials at home. He made his own pair when he was 18 and then started making inserts for other people on the side.

Years later, now a certified orthotist, Neighbors heard that Veterans Affairs was looking for someone to supply bracing and foot care for veterans. The company he worked for was not interested, but Neighbors was.

He called Josh Hill, a colleague in the medical field, and the pair decided to adjust Hill’s existing medical equipment company to fill the VA’s need.

“It just seemed like an opportunity that was just waiting to happen,” Neighbors said.

With Hill’s location and Neighbors’ orthotic experience, Daily Living Medical kicked into gear as a custom foot care company in 2012.

The business supplies orthotics, which include bracing, diabetic shoe inserts and other equipment, to alleviate or treat medical conditions. Most patients are within the VA, but Daily Living Medical occasionally treats other patients as well.

While Daily Living Medical provides an array of pre-made and VA-approved footwear, the company also creates custom products in-house using a cast of a patient’s leg and foot.

Compared to other orthotic businesses, Neighbors believes Daily Living Medical has a faster turnaround for patients who order their products.

“Sometimes we’ll turn around and make (the orthotic) while they wait,” Neighbors said. “It takes about a half an hour or so if you’ve got a couple of people working on it. We’re trying to save the patient time and the VA money.”

If a custom brace is needed, plastic braces are made from plaster models of the patient’s leg. For chronic swelling, for example, a traditional “double upright AFO” works best.

“It’s usually metal and leather, similar to what Forrest Gump might have worn,” Neighbors said with a laugh.

Throughout the week, he travels to Daily Living Medical’s outlets in Columbia, Springfield, Sedalia, Rolla, Kirksville, Mexico, Macon and other Missouri communities.

A typical day entails a combination of making orthotics, matching in-stock products with orders, contacting patients and seeing those who come in with appointments or walk in.

When the orthotic company was launched, Hill’s medical equipment company, also named Daily Living, was at an advantage since it already owned a physical location in Columbia.

Neighbors’ work, on the other hand, had taken place on the road, visiting patients at their home clinics for their convenience. When the two joined forces, they retained the Daily Living Medical name.

Neighbors said his biggest challenge is adapting to the dynamic needs of the community. He strives to better serve his patients by providing new services and expanding to new locations to cut down on travel time for veterans.

A military veteran himself, he entered the Marine Corps in 1990while working toward a bachelor’s degree in mathematics. He completed his degree in 1994 and left the Marine Corps in 2001 to pursue other endeavors. From there, his orthotics experience came full circle when a friend encouraged him to enter the field.

“He got me into it; I got good at it and ended up certifying,” he said.

Once he completed over 3,000 hours of clinical experience, he became certified as an orthotic fitter in 2003 and a certified orthotist in 2005 through the American Board for Certification.

Neighbors lives in Columbia with his wife and two sons, who both do competitive roller skating. His wife is a nurse at University Hospital.

Jennifer Clark, the office manager for Daily Living Medical, said the best part of her job is being able to serve veterans through more than just saying “thank you” for their service.

“It’s taking care of those who have taken care of us,” Clark said. “I get the opportunity to pay it forward.”

Brent Clark, certified pedorthist and Jennifer Clark‘s husband, believes Daily Living Medical’s exceptional customer service sets it apart from other businesses. Most of the staff have a personal connection to the military, which translates to better care for veterans, Brent Clark said.

Ultimately, Neighbors wants to assist veterans throughout the orthotic process with a relentless dedication.

“Dependability is a lot higher probably because of the tools the military gave me,” Neighbors said.

The flights, which have paused because of the COVID-19 pandemic, are scheduled to resume later this year.