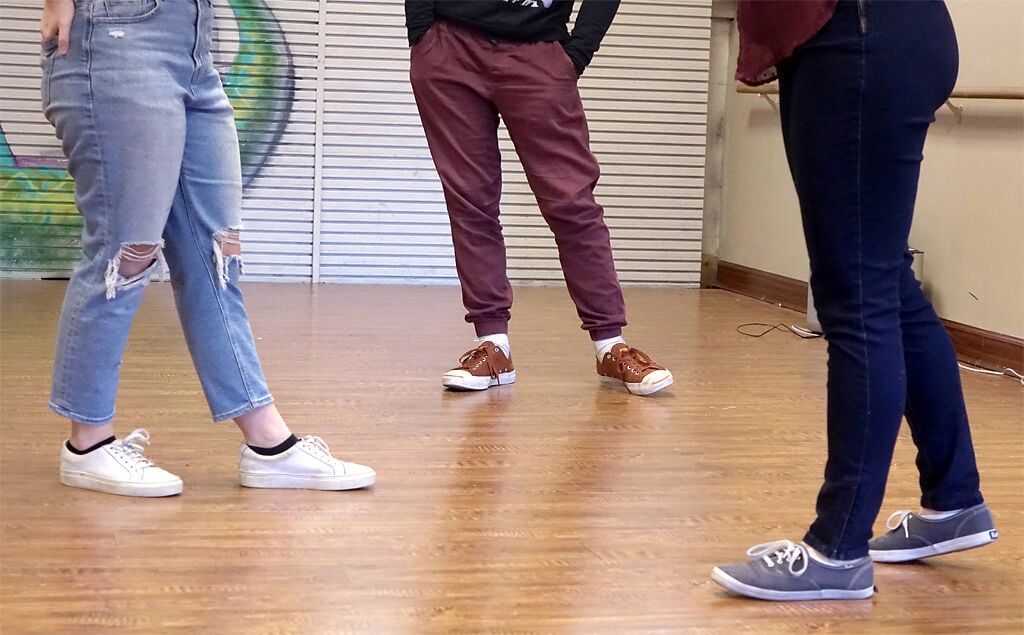 From left, Joni Oswald, Alex Schust and Jeanette Bailey go over basic swing-dance steps with a partner at Jabberwocky Studios. in Columbia. Jabberwocky began instructing students in 2015 and has reached over 2,500 since then. 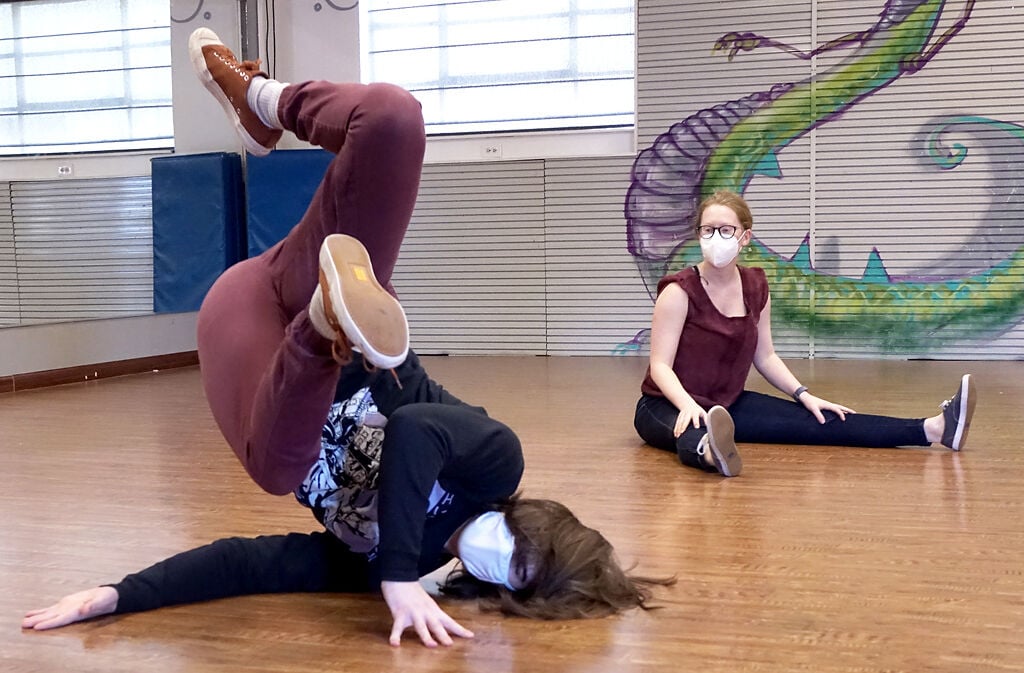 Alex Schust, left, performs breakdancing moves for Jeanette Bailey in Jabberwocky Studios. Schust began as a student in 2014 and is a founding member of Jabberwocky’s performance dance squad. 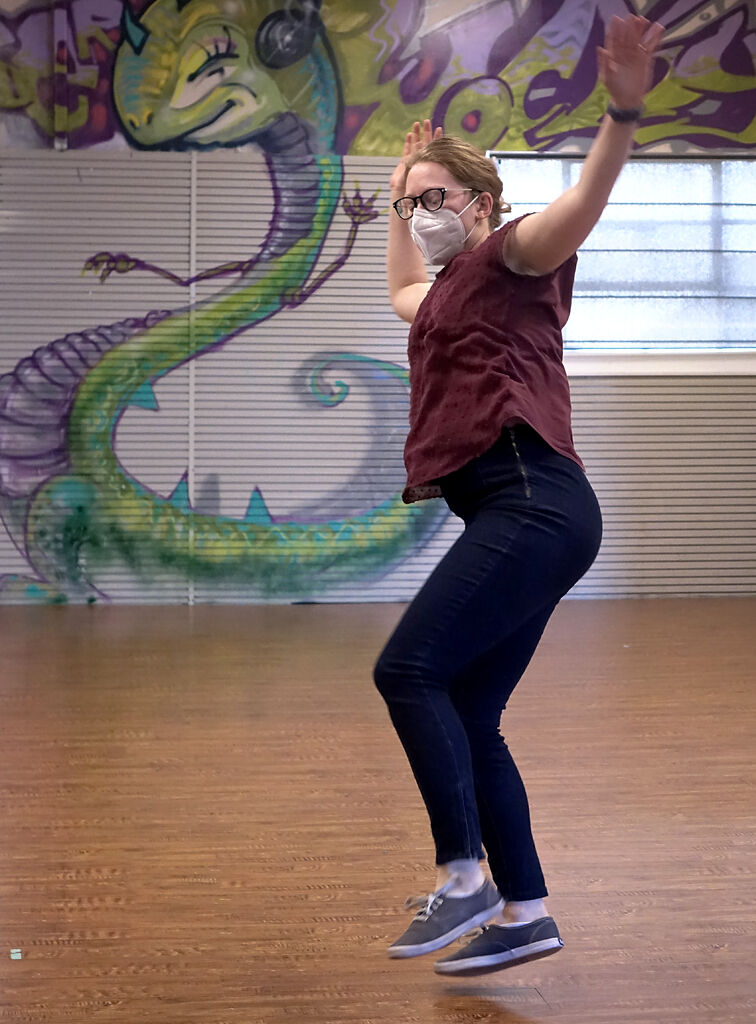 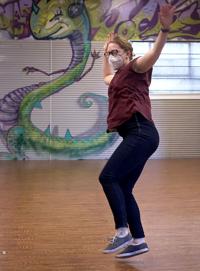 Jeanette Bailey performs a swing dance routine at Jabberwocky Studios in Columbia. Bailey has been studying vernacular jazz dance since 2006 and has been sharing her knowledge of swing dance for nine years.

From left, Joni Oswald, Alex Schust and Jeanette Bailey go over basic swing-dance steps with a partner at Jabberwocky Studios. in Columbia. Jabberwocky began instructing students in 2015 and has reached over 2,500 since then.

Alex Schust, left, performs breakdancing moves for Jeanette Bailey in Jabberwocky Studios. Schust began as a student in 2014 and is a founding member of Jabberwocky’s performance dance squad.

Jeanette Bailey performs a swing dance routine at Jabberwocky Studios in Columbia. Bailey has been studying vernacular jazz dance since 2006 and has been sharing her knowledge of swing dance for nine years.

In a roundabout way, Linda Schust’s background in science led to the dance and fine arts studio she opened five years ago.

Schust taught science at Grant Elementary School and found herself inspired by the richly diverse group of students at the school.

That and a stint on a board of directors for a children’s art organization ushered in Jabberwocky Studios, a place where art and science intersect for students from a wide array of backgrounds.

The studio on Grand Avenue is grounded in theater, art, voice and dance with classes that range from hip hop and breakdancing to slam poetry and mural painting.

“I think the things that set us apart are our hip hop and breakdancing classes because they are kind of our bread and butter,” Schust said.

In addition to contemporary moves, students can learn swing, tap, jazz, ballet and other classical dance styles. Jabberwocky groups paint outdoor murals as a community service, and slam poetry classes give students a chance to participate in Columbia’s “Louder than a Bomb” poetry competition.

The studio has also helped sponsor the annual Africa Fest performances at the Missouri Theatre and an authentic market where members of the African community bring food and handmade goods.

Jabberwocky Studios started with a yard sale and has developed into a full calendar of group and private lessons where experienced instructors have taught more than 2,500 people. The pandemic has put many of the classes on hold, but the purpose and spirit of the studio are still intact.

Jabberwocky was founded with a vision of “a community that supports every individual to reach their full potential in school, work and life,” serving foster kids, immigrants and incarcerated youth, among other students. A tuition waiver program lets those who qualify for free or reduced school lunches take classes for free.

Students say they like meeting new friends at Jabberwocky as much as learning new skills.

“Pretty much everyone here I wouldn’t have met otherwise, but I am pretty close to them all,” said Alex Hiles, who has been taking breakdancing lessons for two years.

Through sponsorship and funding with the Heart of Missouri United Way, a STEAM program schedules 14 four-hour sessions on Saturdays throughout the year. The program combines art with science, technology, engineering and math, mimicking the original concept that motivated Schust to start the studio.

Transportation to and from the STEAM program is included, as well as breakfast and lunch. Students attend a subject-based camp in the morning with a new skill or subject — music, for example — that is explored in depth.

“They learn about music from all aspects of the theme, and hopefully by the end of it they can do something like a drum performance,” Schust said. “They make their own instruments, learn how to change the tone and how to program music.”

When public schools closed at the onset of the pandemic, the STEAM program was postponed, along with dozens of other classes. Schust pivoted the program in August to offer virtual tutoring.

“It’s been a really eye-opening experience,” Schust said. “Even though we have worked with these kids before, we kind of face the hurdles that they face in transitioning to online learning, transitioning from middle school to high school and getting the technology in place that would allow them to access classes.”

Tutoring has yielded rewards for the students, some scoring mostly A’s on their second quarter report card after struggling at the beginning of the school year, Schust said.

Africa Fest will also move online this year, to be staged on a virtual platform in April. The market and the dance classes will not be held, but the performances will be livestreamed.

“People who don’t have access to transportation can access it this year,” Schust said. “As long as you have internet connection, you can access it. It will be a different fest but not necessarily a lesser fest.”

Both of Schust’s children, Alex and Hope, started as students and have now leveled up to become instructors. Alex, who began as a student in the break dancing and hip-hop classes, teaches advanced break dancing.

“There’s like a sense of reward that almost doesn’t exist with achieving a complicated move as a student that does exist with seeing someone who I’m working with achieve those things,” he said.

He and others hope Jabberwocky Studios will soon return to normal programming, with in-person classes and all former activities back in full swing.

“I’d just like to see it get back to normal,” Alex Schust said. “Change is not necessarily a bad thing, but some of the changes made because of the pandemic have felt like it’s really disconnected people.”

Out of the woods