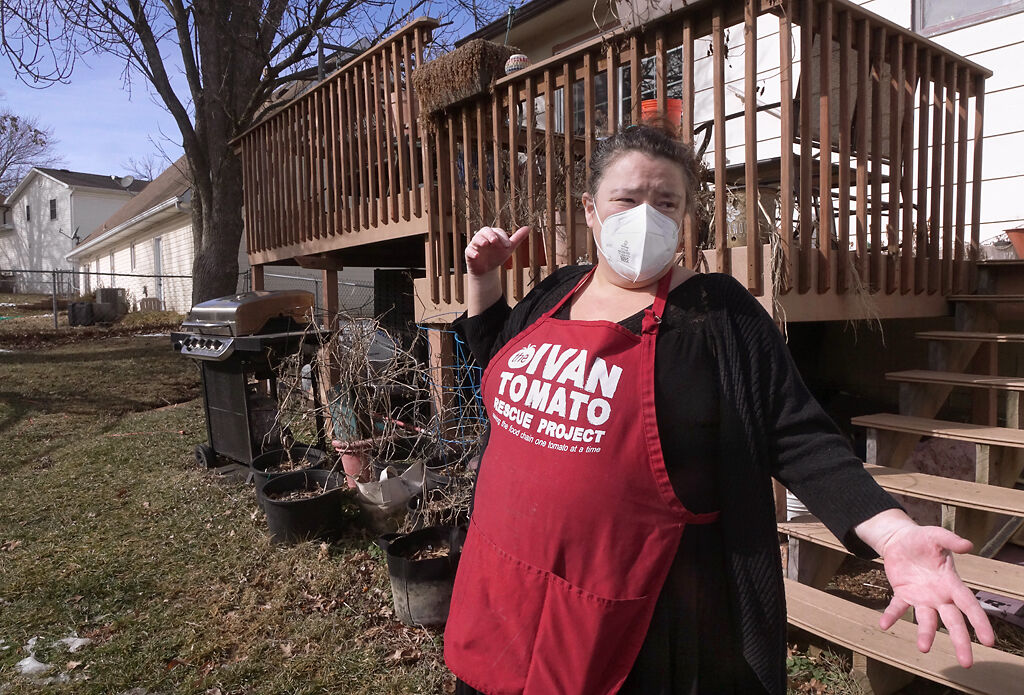 Laura Flacks-Narrol has been in the gardening business for 21 years. 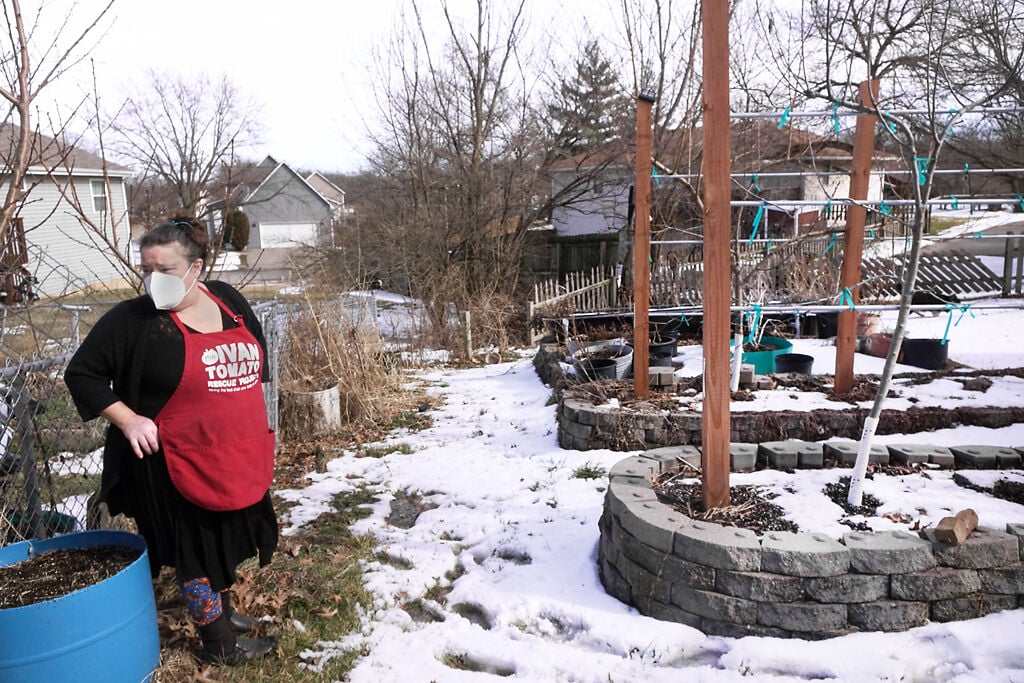 Laura Flacks-Narrol stands before one of her garden beds during a snowy day in February. 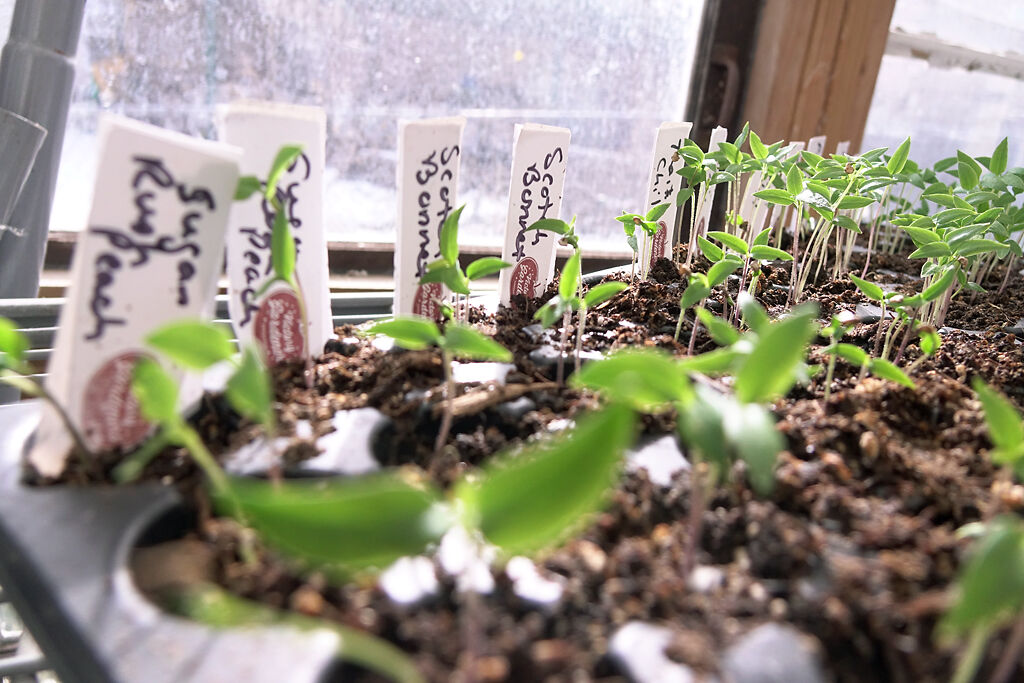 Pepper plants sit on a rack in Laura Flacks-Narrol’s greenhouse in Columbia. Flacks-Narrol began her gardening business as a way to preserve local varieties of tomatoes, but she has since expanded to grow a variety of seeds and plants. She sells them at farmers markets and online.

Laura Flacks-Narrol has been in the gardening business for 21 years.

Laura Flacks-Narrol stands before one of her garden beds during a snowy day in February.

Pepper plants sit on a rack in Laura Flacks-Narrol’s greenhouse in Columbia. Flacks-Narrol began her gardening business as a way to preserve local varieties of tomatoes, but she has since expanded to grow a variety of seeds and plants. She sells them at farmers markets and online.

Laura Flacks-Narrol had no idea what was in store for her when she picked up gardening as a hobby.

Standing in her kitchen today, Flacks-Narrol can see the success in her backyard through the window greenhouse.

Even though she makes a living from plants, she did not discover her passion for a shovel and seeds until she hit her late 20s.

“I was a city chick,” Flacks-Narrol said. “I didn’t even consider growing anything where I grew up in Toronto.”

Now she finds herself surrounded by pots and plants that fill every window sill in her Columbia home. It’s all about her business, Victory Gardeners.

“It’s a passion project,” she said.

Victory Gardeners is an online seed and plant shop that has been based in her home in Columbia since its founding in 2015. From loose leaf teas to bath fizzers to hundreds of plants and seeds, Flacks-Narrol is endlessly creating and selling new plant-based products.

The business is one woman’s dream come true, and Flacks-Narrol heads the operation from planting to packaging — with some help from her family and friends.

“When I first started these businesses, I had this amazing group of women around me,” she said. “They believed in me before I even believed in myself.”

The group was made up of Stephens College women who gathered after Flacks-Narrol lost her job when the college cut strategic leadership and communication positions. That gave her the opportunity to focus on gardening.

It started with a tomato plant called Ivan. She had searched for the perfect tomato and found Ivan at a market in Cooper’s Landing. Ivan did prove to be a magical tomato, but when the market vendor died, Flacks-Narrol became the last gardener to own one.

“I had the last seed to this killer tomato that produces just unbelievable yield,” she said. “And I’m like, What am I going to do?”

She became a vendor at the Columbia Farmers Market. Then when the pandemic hit, Victory Gardeners had to transition overnight from a weekly stand at the market to a virtual operation.

Flacks-Narrol had tried online orders earlier but found that sales were better when people could actually see and touch the plants. In March, knowing that people were looking for quarantine hobbies, she began to advertise on Facebook and the Victory Gardeners website.

“It was like magic,” Flacks-Narrol said. “It was a shot in the dark but an educated shot in the dark because I knew that it could work. I put all my energy into getting the plants online and then launched it with a wing and prayer, hoping people would buy.”

During quarantine, she said more people ordered online than she had ever seen before. And while the transition online could be scary for some business owners, Flacks-Narrol was blessed with marketing experience. She is also the owner of Buzz Well Media, a company that designs websites and helps businesses with marketing strategy.

“It’s been nice to be able to transition with the demand,” she said.

Right now, the demand is online. In January, Flacks-Narrol said she sold five times as many seeds online as she did the year before

Yet, despite the pivot to online, Flacks-Narrol said most sales are still based in Columbia because Victory Gardeners offers free delivery to anyone who spends at least $30 on purchases.

“My husband will bike them their seeds,” Flacks-Narrol said. “But with the plants, we have to drive them, honestly, because he can’t bike that kind of quantity. We would spend two to three days a week just driving around Columbia dropping off bags of plants.”

Even during the off-season earlier this year, Flacks-Narrol said Victory Gardeners has topped the family’s growing capacity. She plans to put a temporary greenhouse in her driveway to make it through 2021 and the foreseeable future.

“Whatever your trauma is, whatever your issues are, I think people should acknowledge that healing happens when you grow,” Flacks-Narrol said.

Others believe in the power of producing and selling produce, including Corrina Smith, executive director of the Farmers Market.

“Saturday mornings are my favorite part about the job, interacting with producers and seeing the community come out,” she said. “And most rewarding is knowing that the work that I do is helping these small farmers and producers, businesses succeed.”

Out of the woods