The sour patches, gummy fruit slices and peanut butter cookies on the corner shelves of the Wild Side Smoke Shop look like normal snacks. But in fact, they are edibles infused with delta-8-THC, a psychoactive substance found in the cannabis plant.

“Take half of it, and you’ll get a nice body high,” shop assistant Ben Stieferman said. “And a full one will put you to sleep.”

Stieferman estimated that cannabis-based edibles account for 15% to 20% of sales at the store that opened on Ninth Street this summer. He thinks edibles are a good starting point for many clients.

“It’s not like smoking because it has an effect rather on the body, not in the mind,” Stieferman said. “And a lot of people just don’t like to smoke.”

Smoked cannabis, such as a joint or pipe, is popular among college students, but the use of edibles has been growing steadily in recent years. 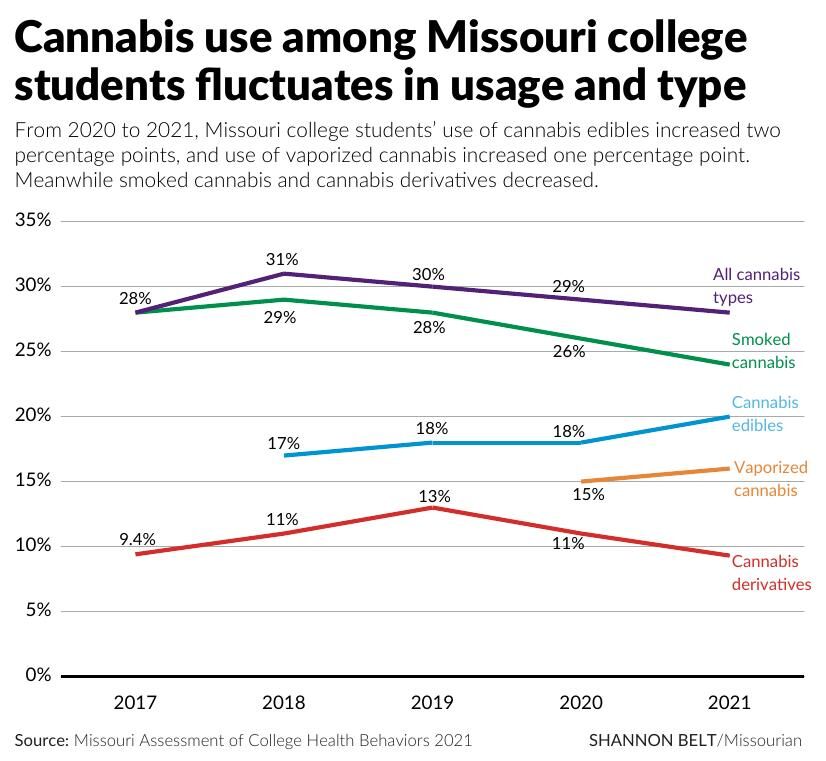 In an online survey conducted at 24 college and universities in Missouri, one in five students indicated they had used edibles in the past year.

Most students who have used cannabis edibles in the past year said they consumed them a maximum of six times per year, with smaller percentages saying they consumed more frequently.

Margo Leitschuh, a spokesperson at Partners in Prevention, the Missouri higher education abuse consortium that conducts the annual survey, explained the rise of edibles as easier access.

“People used to have to make edibles, such as brownies, at home,” Leitschuh said. “As more states, such as Illinois, have legalized marijuana for recreational use, it’s easier to buy edibles. They look like snacks and have gained popularity with college students.”

Edibles are also easier to hide and don’t have a smell, unlike joints or marijuana plants.

Although the rules on delta-8-THC products are unclear in Missouri, MU prohibits the “unlawful possession, use, distribution, and sale” of illicit drugs, including edibles.

“Students shouldn’t use edibles on campus, and shop owners could make students aware of this policy too,” Leitschuh stressed.

The most surprising aspect of edibles is the different intoxicating effect, consumers say.

Whereas smoking marijuana creates a fast peak, edibles take longer to kick in. But the effect of a weed cookie lasts three to five hours longer than smoking or vaping.

Leitschuh warns that the slower edible take-off can lead to a higher risk of overconsumption.

“You take one, and if you don’t feel the effect immediately, you may take another one, leading to a much higher dose,” she said.

“That is especially dangerous with homemade edibles, where no dose is indicated, and people don’t know how much they are taking.”

"I'm four and a half years seizure free now with both of these plants," Heather DeRose said of hemp and marijuana.