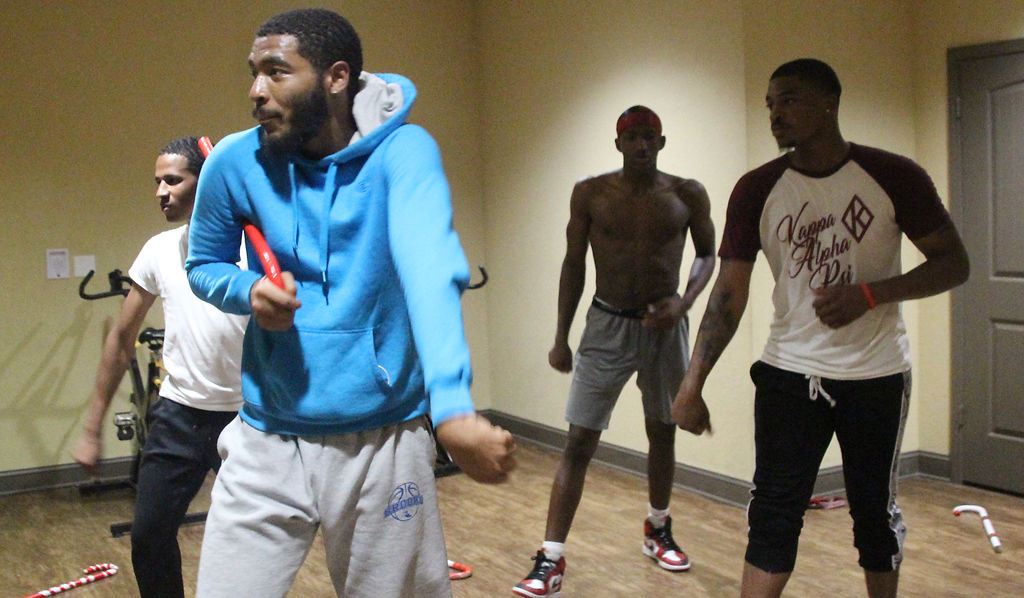 Kyle Hay, far left, Shawn Gowder, Omar Gates and Tree Davis practice for the 2019 Homecoming step show on Sept. 12 at Elevate 231. The men are a part of the Delta Omega chapter of Kappa Alpha Psi Fraternity at MU. 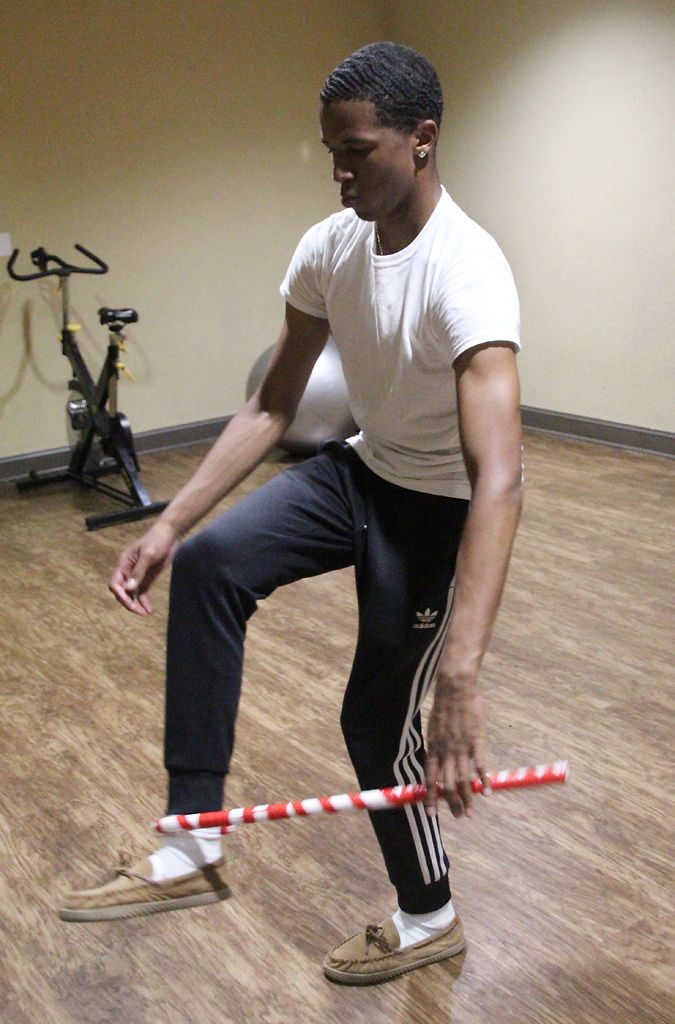 Kyle Hay swings his cane during rehearsal for the 2019 Homecoming Step Show on Sept. 12 at Elevate 231. The canes are a tradition within the Kappa fraternity.

Kyle Hay, far left, Shawn Gowder, Omar Gates and Tree Davis practice for the 2019 Homecoming step show on Sept. 12 at Elevate 231. The men are a part of the Delta Omega chapter of Kappa Alpha Psi Fraternity at MU.

Kyle Hay swings his cane during rehearsal for the 2019 Homecoming Step Show on Sept. 12 at Elevate 231. The canes are a tradition within the Kappa fraternity.

Entering the Elevate231 Clubhouse, the only sound is the “boom boom boom” of steps above.

Suddenly, the vibrations cause a light fixture to fall from the ceiling and glass to shatter everywhere.

That is just a small sacrifice that Kappa Alpha Psi fraternity has accepted as part of its preparation for the 2019 Homecoming Step Show.

For one night only — Oct. 11 — the National Pan-Hellenic Council organizations compete for the best skit, step and stroll routine. Dance teams FYE and Main Attraction will also be performing in Jesse Auditorium on this night.

“This step show is important to the university. It not only represents the organizations and the different fraternities, sororities and dance teams, it provides an outlet to compete with each other and have a good time,” said Lester Anderson of Omega Psi Phi fraternity.

“It also provides representation for the black community of Mizzou. It’s all about us. It’s pretty nice to have that representation. We don’t get that,” he said.

Usually the step show incorporates a theme for each team to follow. This year there is no theme, which allows the performers to get creative.

Omega Psi Phi fraternity is taking advantage of the opportunity and going with the theme “Roll Bounce.”

“We are going to be extra, extra funky,” Anderson said. “We are going to definitely watch the movie and literally use that as influence. Obviously they’re on skates so we can mimic them to a certain extent and add our own little funk to it, but it’s a lot of opportunity for funny scenes so it worked out perfect for us.”

Alpha Phi Alpha fraternity is merging two movies into one with “The Outsiders” and “Grease.”

Sean Clemmons is their step captain, and this will be his third time orchestrating the Alphas routine.

“It’s fun, and it’s super rewarding,” Clemmons said. “I love putting a lot of work into the show, and regardless of what place we get every single year, I’m always so happy to see us have a good show. It’s always a competitive nature in the room when we’re practicing and stuff, but as a coach it’s just rewarding.”

The men of Kappa Alpha Psi are keeping their theme confidential until the night of the show.

What they did say is that it’s going to be nostalgic, seductive and spooky.

This will be their first time competing in the Homecoming Step Show.

They have performed in yard shows and stroll-offs, but nothing of a magnitude that fills Jesse Auditorium.

“I don’t look at it as a disadvantage,” said Kyle Hay, public relations chair. “We are all working hard, and I feel like it’s our first opportunity to show everybody another side of us.”

“Everybody sees us stroll, but nobody has really seen us step,” he added. “I feel like it’s a good opportunity.”

The polemarch for the Kappas, Christian Bell, is confident in his organization’s ability to take home the trophy.