Tony the Landshark, the unconventional mascot for Ole Miss, doesn’t seem to take away from the original pride the school has in being the Rebels.

In 1936, a competition was held to identify a mascot. Ben Guider offered up “The Rebels,” which became the household name for Ole Miss for decades.

A Confederate character was the face of The Rebels, but he wasn’t always considered an official mascot — rather a sideline figure who led the football team to the field.

Colonel Reb came along later, as a white-bearded gentleman with a brimmed hat, a cane and a red coat.

There is a theory that states the mascot was based on a man called James Ivy, better known as “Blind Jim.” According to the University of Mississippi, Blind Jim was well-known at the university when he joined in 1896 for being the mascot of the football team.

Over the years, the Confederate image drew controversy to Ole Miss football. Eventually, the school decided to abandon him.

Another competition was held to identify a mascot. According to The Daily Mississipian, the choice was among a landshark, a black bear or a Hotty Toddy. The black bear won most of the student vote and became the mascot for seven years, but never really caught on.

In 2017, another vote was taken with the same three choices, and the landshark won. 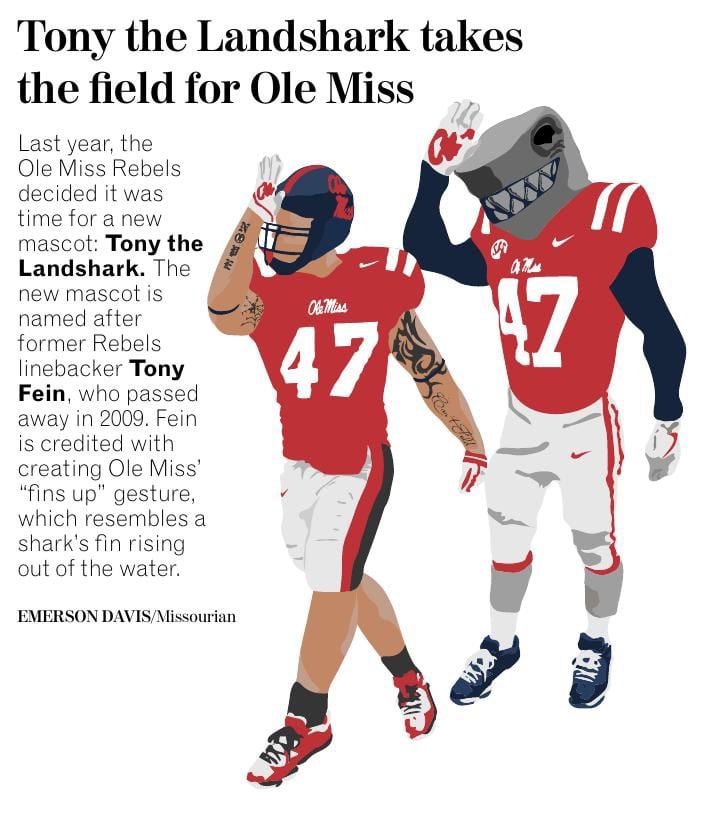 According to the university’s website, members of the football team celebrate exceptional plays by putting a hand to their forehead in the shape of a shark fin.

The tradition began in 2008 after an Ole Miss victory in the Cotton Bowl. A defensive team senior linebacker, Tony Fein, started it all. Fein had joined the U.S. Army right out of high school and was the recipient of the Pat Tillman Award by the Military Order of the Purple Heart.

While serving a one-year tour in the Iraq War, Fein’s unit nickname was “the landsharks,” according to Red Cup Rebellion. His fins-up sign was a gesture of his aggressive plays on the field.

Tony the Landshark bears his name.