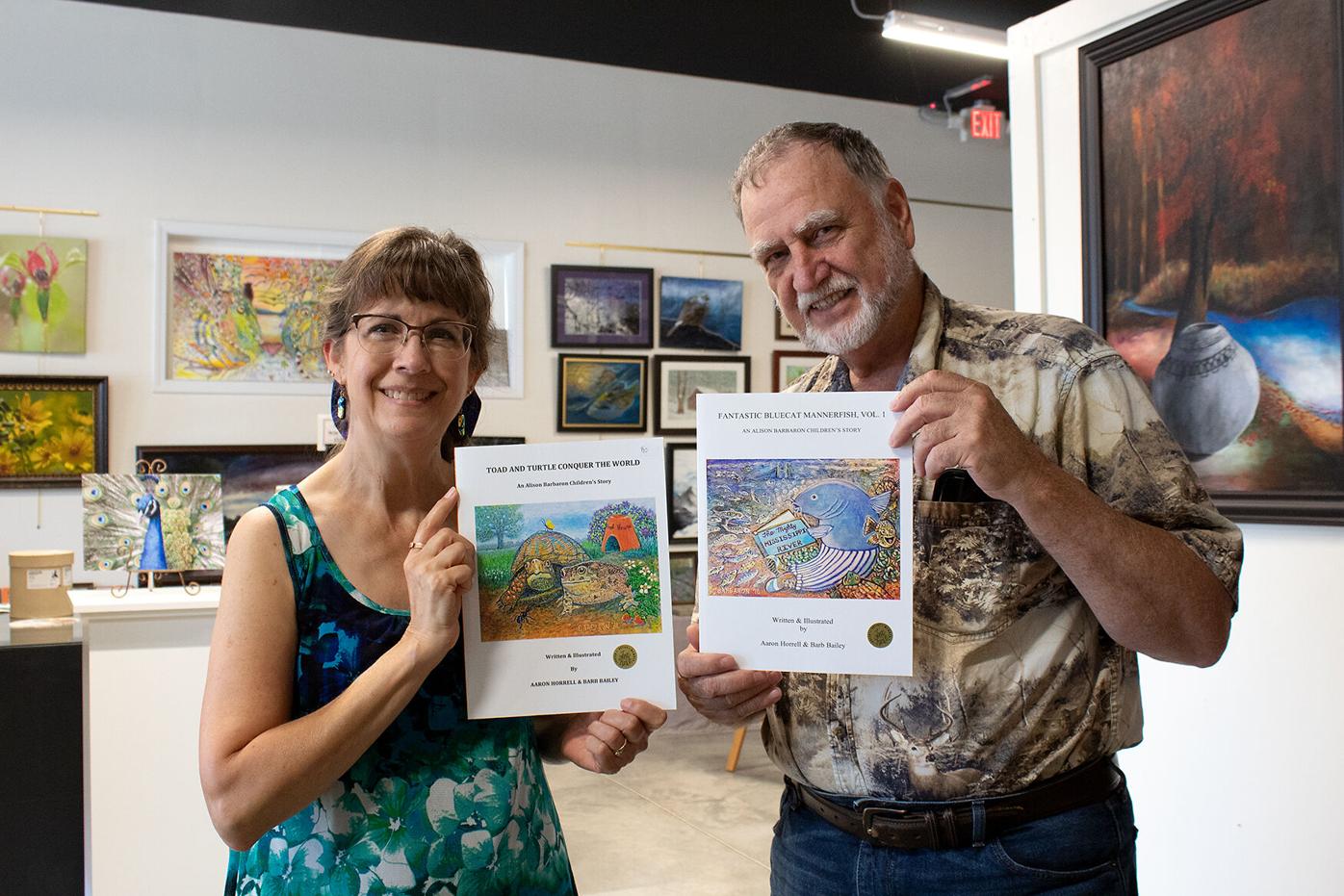 Barb Bailey and Aaron Horrell hold up children’s books they have produced together. Bailey and Horrell are partners at the Painted Wren Art Gallery in Cape Girardeau. 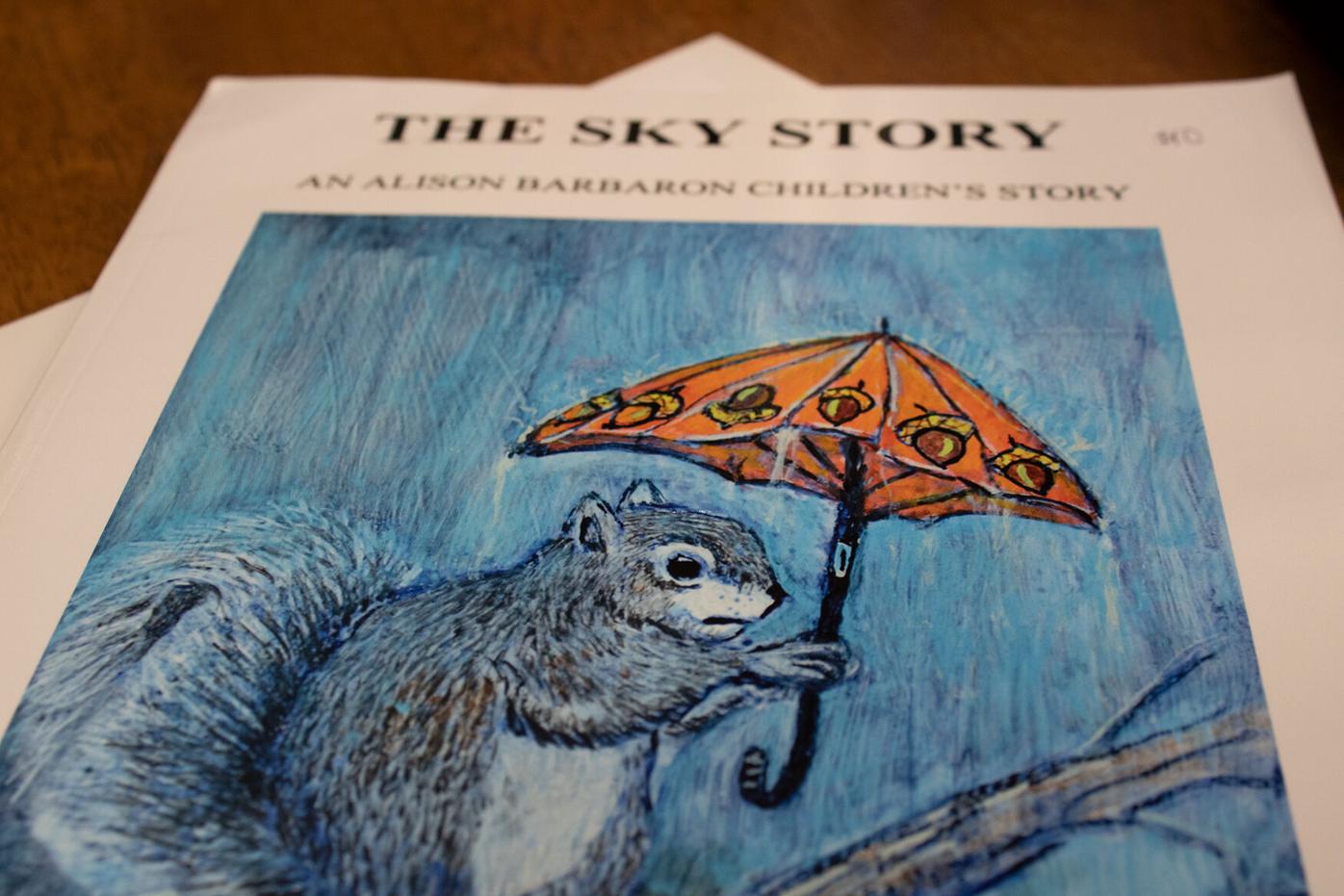 A children’s book called “The Sky Story” lies on a table at the gallery ready to be purchased.

Barb Bailey and Aaron Horrell hold up children’s books they have produced together. Bailey and Horrell are partners at the Painted Wren Art Gallery in Cape Girardeau.

A children’s book called “The Sky Story” lies on a table at the gallery ready to be purchased.

“He asked if I would be interested in painting with him,” Bailey recalled. “He said we could take turns and paint back and forth just to see if it would work.”

Bilderbach’s now sits empty, but the pair has survived the test of time. They now create art together at Painted Wren Art Gallery, Horrell’s downtown art gallery in Cape Girardeau.

Together Bailey and Horrell write and illustrate children’s books. The books sell under the pseudonym, Barbaron, a combination of their first names. The artists classify their paintings as works of surrealism and impressionism.

The books are based on stories Horrell used to tell his children when they were younger. Bailey and Horrell illustrate the books with acrylic paint on masonite or di-bond panels. The 6-by-10-inch illustrations, known as BarbAron minis, often include colorful pictures of animals interacting with each other in nature.

Their latest story, “The Sky Story,” teaches children the colors of the rainbow through the animals depicted in the story. A green frog or a grey squirrel are pictured in the sky.

The story was inspired by Horrell’s grandson, who is now 4 years old. Most of the children’s books cost about $10 each and can be purchased at The Painted Wren or on Amazon.

Bailey also sells soap she makes at Lutheran Heritage Museum in Altenburg and at the Bollinger farmers market in Marble Hill.

“I have Aaron’s artwork on my wall and Barb’s soap in my bathroom,” said customer Darrell Back. “The regular soaps that I use dry out my skin, but her soaps really moisturize.”

“They are very creative together, and they are a great team,” added local artist Jeanie Eddleman.

Bailey and her husband raise goats on their farm in Bollinger County. Bailey started by selling milk, yogurt and cheese. A friend encouraged her to try creating soap with goat’s milk, and she has been making soap since 2005.

“I think it’s fun,” she said. “I like to see how some of the soaps turn out if I try a new fragrance.”

Bailey’s soaps are made with 100% pure goat milk, and she then adds ingredients like oatmeal, olive oil and a variety of clays to the mix.

Some ingredients serve specific purposes, such as the coffee soap that helps neutralize odors. Her soaps ranges from $4 to $5 each, but some of the smaller soaps cost anywhere from 50 cents to $1.25.

Horrell said he has always painted regardless of what job he had. Even on a dairy farm where he worked, he always found time to pursue art.

“I painted when I was in the service,” he said. “I gave paintings away to people, and sometimes somebody would pay me $10 for a painting. I always loved painting, even on the dairy farm.”

Painted by 16,116 Missourians, the 15 individual panels of the mural traveled around the state to be painted. Each person painted a 2-inch triangle on the 12 foot-by-30-foot mural.

“Our youngest painter for this project was a 12-day-old twin baby girl in Ste. Genevieve, and our oldest one was here in Cape in one of the nursing homes, and she is 102,” Bailey said.

The mural is part of a Paint for a Cause project that Horrell created.

Horrell wanted to bring more people into the art gallery and be involved with the art. He came up with the idea of participants paying $1 to paint a small portion of a painting.

All of the money raised, including the finished painting itself, will go to a charitable organization like the Safe House for Women in Cape Girardeau or Watkins Wildlife Rehab in Friedheim.

Looking ahead, the artists hope to get their books into other parts of Missouri for people to enjoy.

“If you really like art and you really want to be an artist, it has to come out of you and come from inside you,” Horrell said.

Who: Barb Bailey and Aaron Horrell

When: 1 p.m. to 6 p.m. Tuesday through Saturday; closed Monday and Sunday