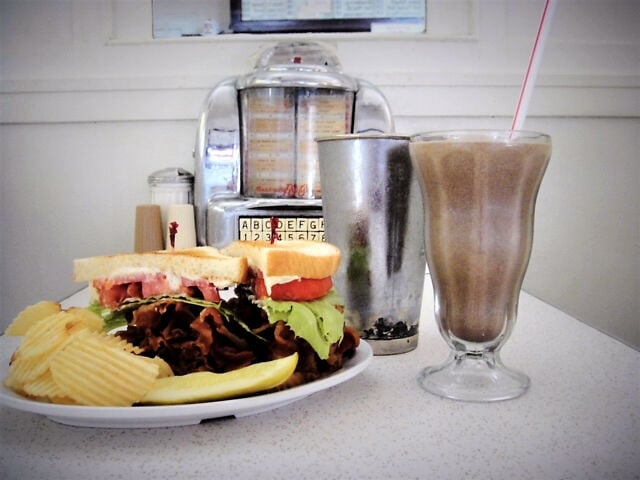 A sandwich and a shake sit on a table at Crown Candy Kitchen in St. Louis. The table also has a vintage jukebox, one of the many artifacts in the restaurant that add to its vintage aesthetic. 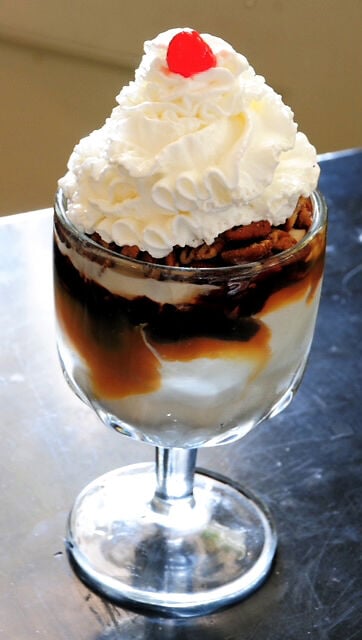 A sundae sits on a table at Crown Candy Kitchen in St. Louis. The confectionary and restaurant offer 14 different types of sundaes.

A sandwich and a shake sit on a table at Crown Candy Kitchen in St. Louis. The table also has a vintage jukebox, one of the many artifacts in the restaurant that add to its vintage aesthetic.

A sundae sits on a table at Crown Candy Kitchen in St. Louis. The confectionary and restaurant offer 14 different types of sundaes.

Stepping into Crown Candy Kitchen is like stepping back into early 1900s St. Louis.

The eatery has the same booths, candy counter and soda fountain it did when Henry Karandzieff opened it in 1913.

His son George Karandzieff took over the early ’50s, when Crown Candy still had the original ceiling and ice cream equipment it did a half-century earlier.

“We’re just this icon,” said Sherri Karandzieff, whose husband, Andy, and his brothers now own the shop.

“My grandma lived in this neighborhood in this area, and she came here when she was a little girl.”

Her grandmother brought her mother, and then Sherri and her siblings, to Crown Candy Kitchen on St. Louis Avenue.

“Generation after generation have been coming here,” she said.

Andy Karandzieff and his brothers bought the restaurant and confectionery from their father in 1991.

The candy counters hold nut clusters, candy bars, caramels and creams. But the signature candy is the heavenly hash, or Crown Candy hash — marshmallow covered in chocolate and pecans.

“I tell myself all the time, ‘I don’t like marshmallow,’” Sherri Karandzieff said. “But then I take a bite of this heavenly hash, and it’s like, ‘Nope, I really do like marshmallow.’”

Over the years, the menu has expanded to include lunch and dinner options, including chili, tamales and soup.

There are also 16 types of sandwiches and melts on the menu, including a Reuben, turkey bacon melt and the Heart Stopping BLT, with 14 pieces of bacon. The sandwich was featured in the Midwest episode of Adam Richman’s “Best Sandwich in America.”

“We came in second on our episode, but we’ll take it,” Karandzieff said.

On arrival, guests have two lines to choose from — a line for sitting in a booth and another to order food to go. People dining in can scout the candy counter for something to munch on while they wait for food.

“I don’t know that there’s one thing that we recommend to all of our guests ... but try a little bit of everything,” Karandzieff said. “You know, sometimes it’s good to get your dessert first.”