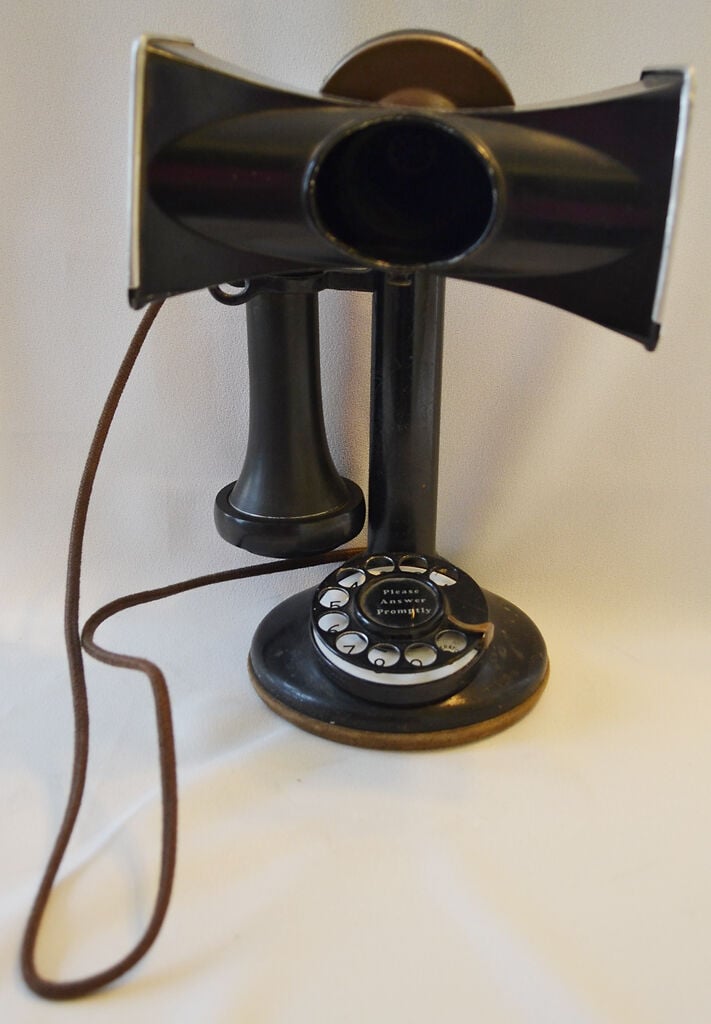 A 1930s American Bell Model 151AL candlestick telephone with a Hush-a-Phone attachment is displayed at the museum. 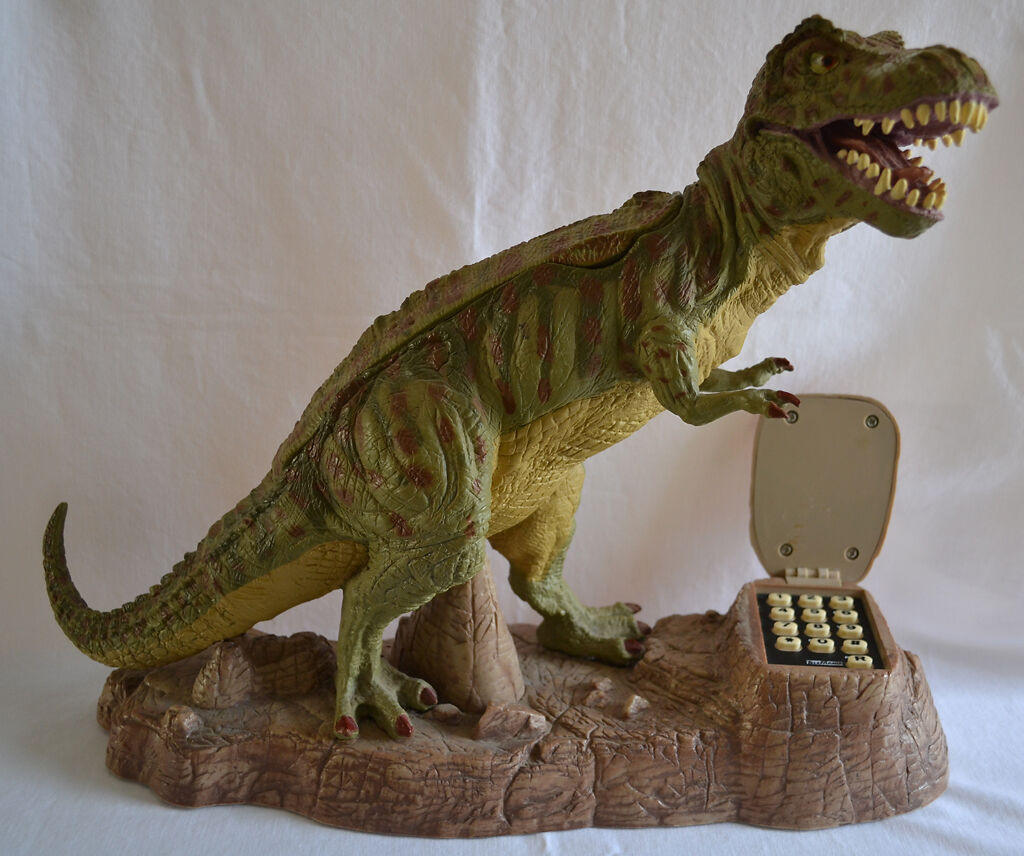 A 1994 Dino Tyrannosaurus Rex Telephone on display at the museum. This is one of many novelty telephones owned by the museum. 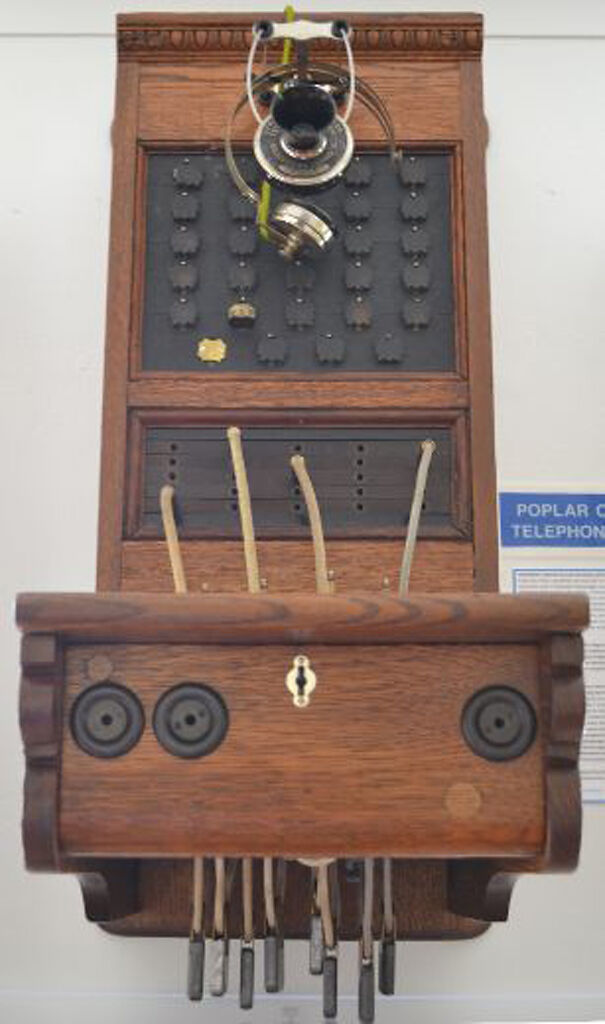 A 1920s Stromberg-Carlson Village Exchange Switchboard mounted to a wall at the museum. In addition to the numerous telephones, the museum also features switchboards, which connected telephone users.

A 1930s American Bell Model 151AL candlestick telephone with a Hush-a-Phone attachment is displayed at the museum.

A 1994 Dino Tyrannosaurus Rex Telephone on display at the museum. This is one of many novelty telephones owned by the museum.

A 1920s Stromberg-Carlson Village Exchange Switchboard mounted to a wall at the museum. In addition to the numerous telephones, the museum also features switchboards, which connected telephone users.

The museum is part of a complex that once housed officers at the Jefferson Barracks Military Post during World War I and World War II. It was built in 1896, and the original architecture is still intact on the outside.

The ground floor of the building houses the Jefferson Barracks Telephone Museum, where 500 telephones have been on display, since May 2016 .

They date from the late 1880s to 2000. Many sit behind display cases, others are interactive displays, and all have informative placards.

The museum displays many antique telephones that have fallen out of use. The oldest telephones on site predate the iconic rotary dial and handset design. These telephones, which were found in 19th century homes, are wooden and wall-mounted, with an attached microphone and a receiver to be picked up and held to the ear.

“You had to go through an operator to complete the call. You couldn’t dial it directly yourself,” said Carol Johannes, executive director of the museum. “That’s interesting to a lot of people.”

The museum also features versions of wall-mounted and desk phones that have dials or touch tone keypads in various shapes and sizes.

Visitors can also see replicas of Alexander Graham Bell’s 1876 Liquid Transmitter and his 1877 First Commercial Telephone, as well as a statue of the man himself.

Those interested in military history can learn about telephone systems used from World War I to the Gulf War.

And if you ever wanted to see a telephone in the shape of a dinosaur, this is the place. A collection of novelty phones shaped like cars, cartoon characters and all sorts of surprising and creative designs are also on display.

In addition to commercial telephones and household devices, the museum has hundreds of pieces of equipment used by technicians and operators, as well as an assortment of memorabilia.

Most of the telephones, equipment and accessories have been donated by collectors and others who wanted to share their heirlooms.

For a guided experience, volunteer telecommunications retirees offer tours of the museum, providing insights on the history of the industry and their own experiences. The museum gives walk-in tours for small groups and reservations for larger groups.

The staff can tell you all about the process of making a phone call on one of these phones, including a look at real operator switchboards from the 1920s and 1960s.

”I just like seeing the expressions on their faces when they see some of this equipment and how some of it works,” Johannes said.

These tours last about an hour, and admission costs $5 for adults with discounts for children and seniors.

Visitors who wish to purchase a souvenir on their way out can select from numerous telephone related books, signs, magnets, prints, belt buckles, trinkets and real telephones.

If you have any questions or wish to make a reservation, the museum can be reached by telephone at 314-416-8004.