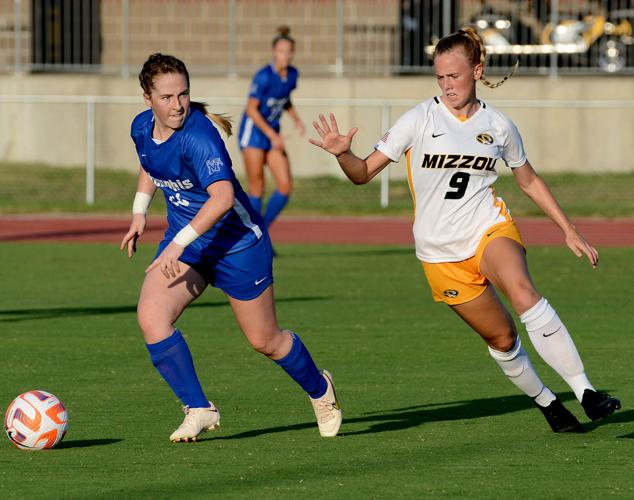 Haylee Spray left, and Milena Fischer chase the ball at Audrey J. Walton Stadium in Columbia. MU Soccer had an exhibition game against Memphis in early August. Fischer is a top recruit from Germany. 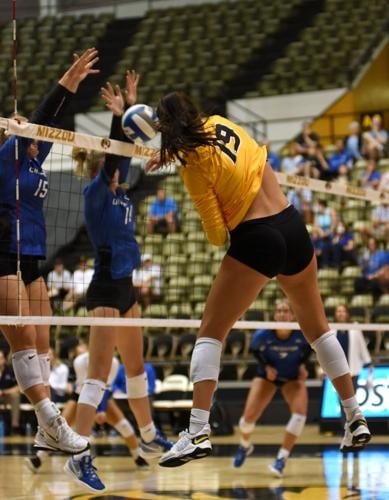 Missouri's Anna Dixon, slams the ball during the game against Creighton on Aug. 28, 2021, at the Hearnes Center in Columbia.

Haylee Spray left, and Milena Fischer chase the ball at Audrey J. Walton Stadium in Columbia. MU Soccer had an exhibition game against Memphis in early August. Fischer is a top recruit from Germany.

Missouri's Anna Dixon, slams the ball during the game against Creighton on Aug. 28, 2021, at the Hearnes Center in Columbia.

There’s much to look forward to as the soccer season approaches. Under the direction of head coach Stefanie Golan, the Missouri Women’s soccer team is looking to make its mark this season ahead of its first game against the University of Memphis at 7 p.m. in Audrey J. Walton Soccer Stadium.

Last season, the Tigers finished with a record of 7 wins, 10 losses and 1 draw.

While the season did not go as planned for the Tigers, there are notable players to look out for this upcoming season that could impact the dynamic of the team’s season.

One of these players is sophomore Milena Fischer, who was recruited last year from Saarbrücken, Germany.

Fischer previously played for the German national team in the European Championships played in Bulgaria in 2019, helping her teammates win gold.

She was also included in the SEC All-Freshman Team last season with 11 starts in 14 appearances for the Tigers. In terms of having an offensive powerhouse that can both score and assist, the midfielder should be an exciting player to watch next season.

Another player to keep an eye on is incoming freshman Elena Zuchowski. She was ranked as the No. 159 recruit in the class of 2022 and No. 57 midfielder, according to Top Drawer Soccer.

Along with these accolades, she is also ambidextrous which is uncommon yet quite a strong quality for soccer players who can shoot and pass with either foot.

Missouri will face off against longtime rival KU on Sept. 4, which will be a must-win game in the eyes of many MU supporters.

After a disappointing end to last season with a 5-26 finish, the Missouri women’s volleyball team is hoping to bounce back this fall.

Anotherr player to watch this season is Anna Dixon. Standing at 6-foot-3, Dixon has established herself as a dominant offensive threat for the Tigers.

Last season, she led the team in kills, with 380 while also averaging a team-high of 3.89 points per set.

Following her eye-catching individual performance last season, Dixon was invited to the Women’s National Team Open in Colorado Springs where she competed with some of the best collegiate volleyball players in the country. Dixon was also selected for the 2022 U.S Women’s Collegiate National Team.

This season will mark head coach Joshua Taylor’s fourth season at MU, and he will be looking to make some waves in the SEC Division this upcoming season.

The Tigers are set to kick off their schedule by playing in the Mizzou Invitational from Aug. 27-28 at Hearnes Center.

Season and single tickets are now on sale at www.MUTigers.com/VBTix.

Missouri’s cross country has its sights on trailblazing a path to a successful new era after new management changes.

The appointment of men and women’s cross country head coach Lindsey Anderson should bring changes in the program as she takes over where Marc Burns left off.

Anderson was National Junior College Athletic Association Division I Coach of the Year in 2021, and she will join the Tigers after previously coaching at the College of Southern Idaho.

The Mizzou XC Opener on Sept. 1 will mark the first cross-country exhibition on the calendar for the Tigers, taking place at Gans Creek Cross Country Course in Columbia.

Head coach Andrew Grevers is set to enter his fourth year in charge of the swimming and diving program. Last year under the direction of Grevers, both the men and women’s team had 25th place finishes at the NCAA championships.

For the men’s team, Jack Dahlgreen, Danny Kovac and Ben Patton helped lead the team in the most recent NCAA championship. The women’s team’s 25th place in the NCAA Championship was facilitated by Megan Keil and Meredith Rees.

The Tigers also managed to secure two podium finishes at the SEC Championships.

In short, the Tigers will be looking to build on last year’s success ahead of the season, and both the men and women’s teams should be entertaining to watch.