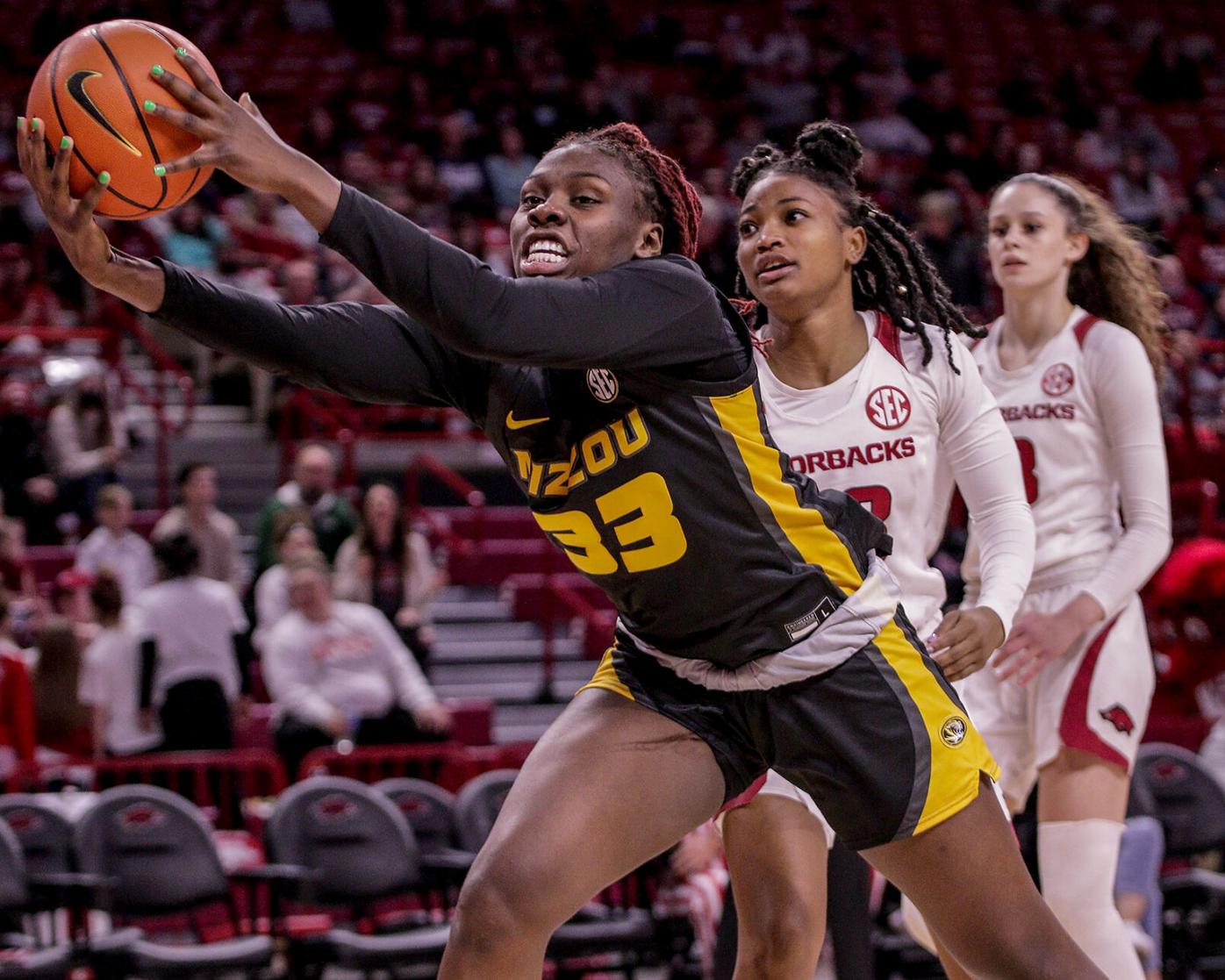 MU guard Aijha Blackwell saves the ball from going out of bounds during Arkansas’ win over MU on Sunday at Bud Walton Arena in Fayetteville, Ark. MU’s next game is against LSU on Thursday. 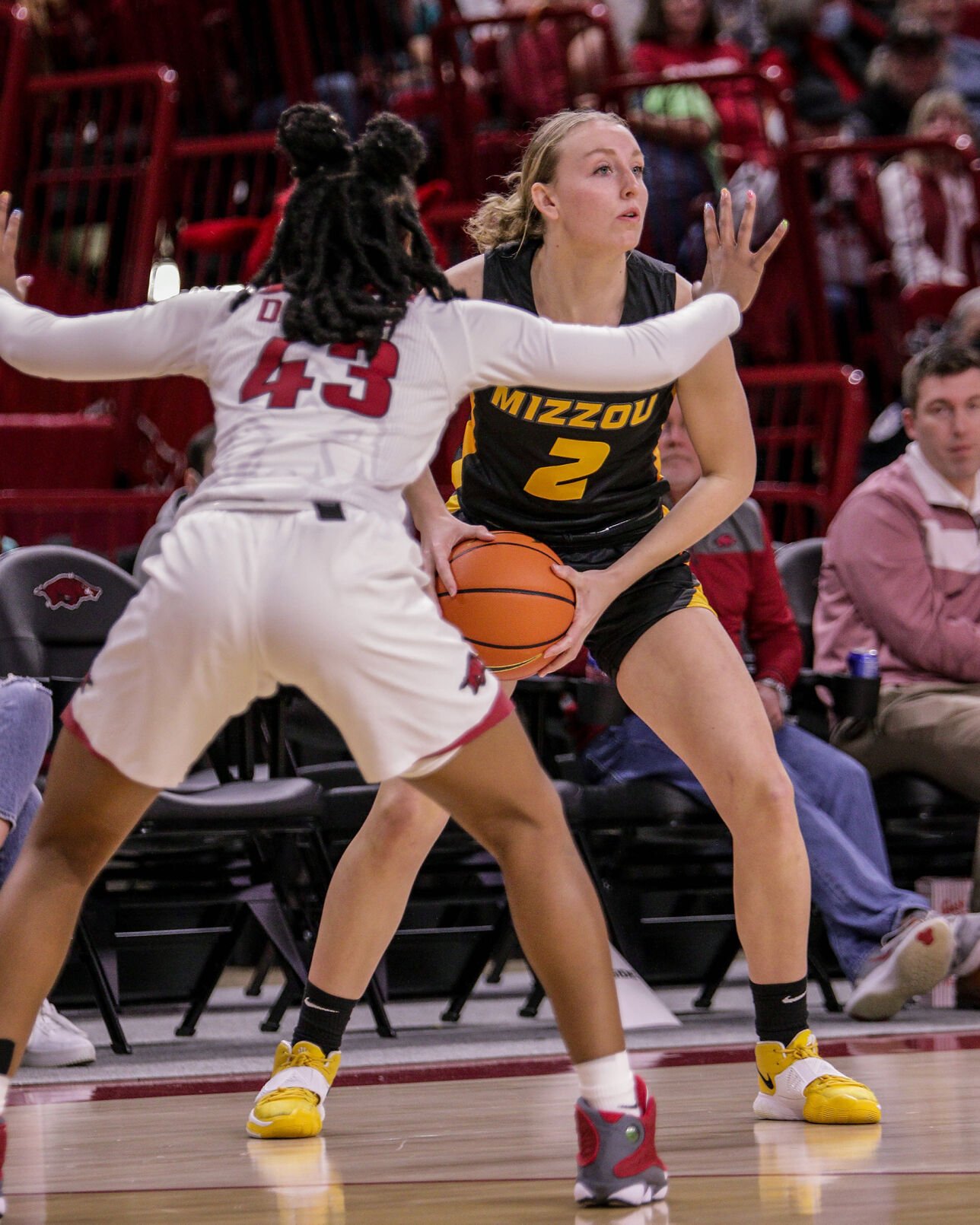 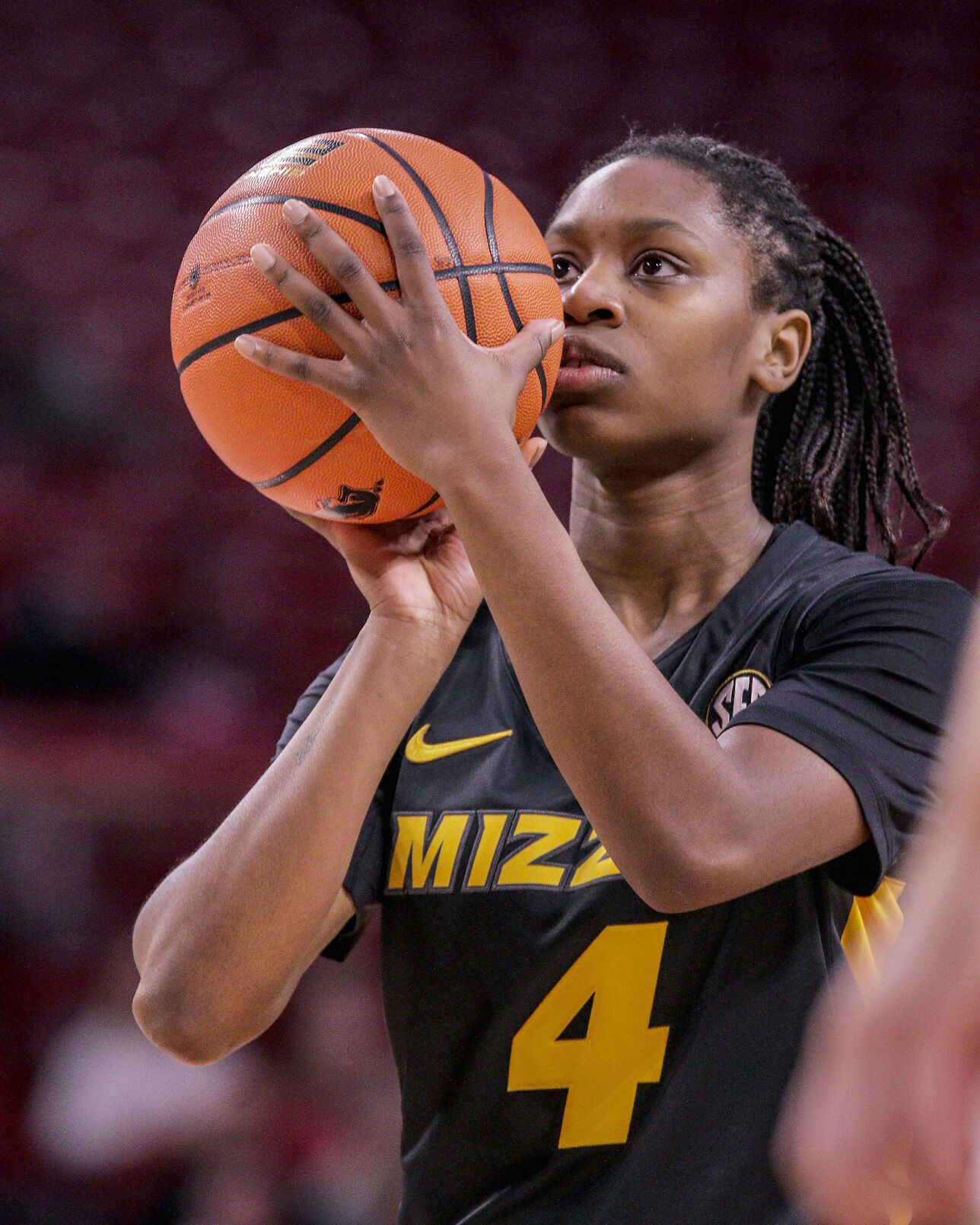 Missouri guard Mama Dembele eyes the basket for a free throw during Arkansas' win over Missouri on Sunday at Bud Walton Arena in Fayetteville, Ark. Dembele had 16 points and shot 3-3 from beyond the arc. 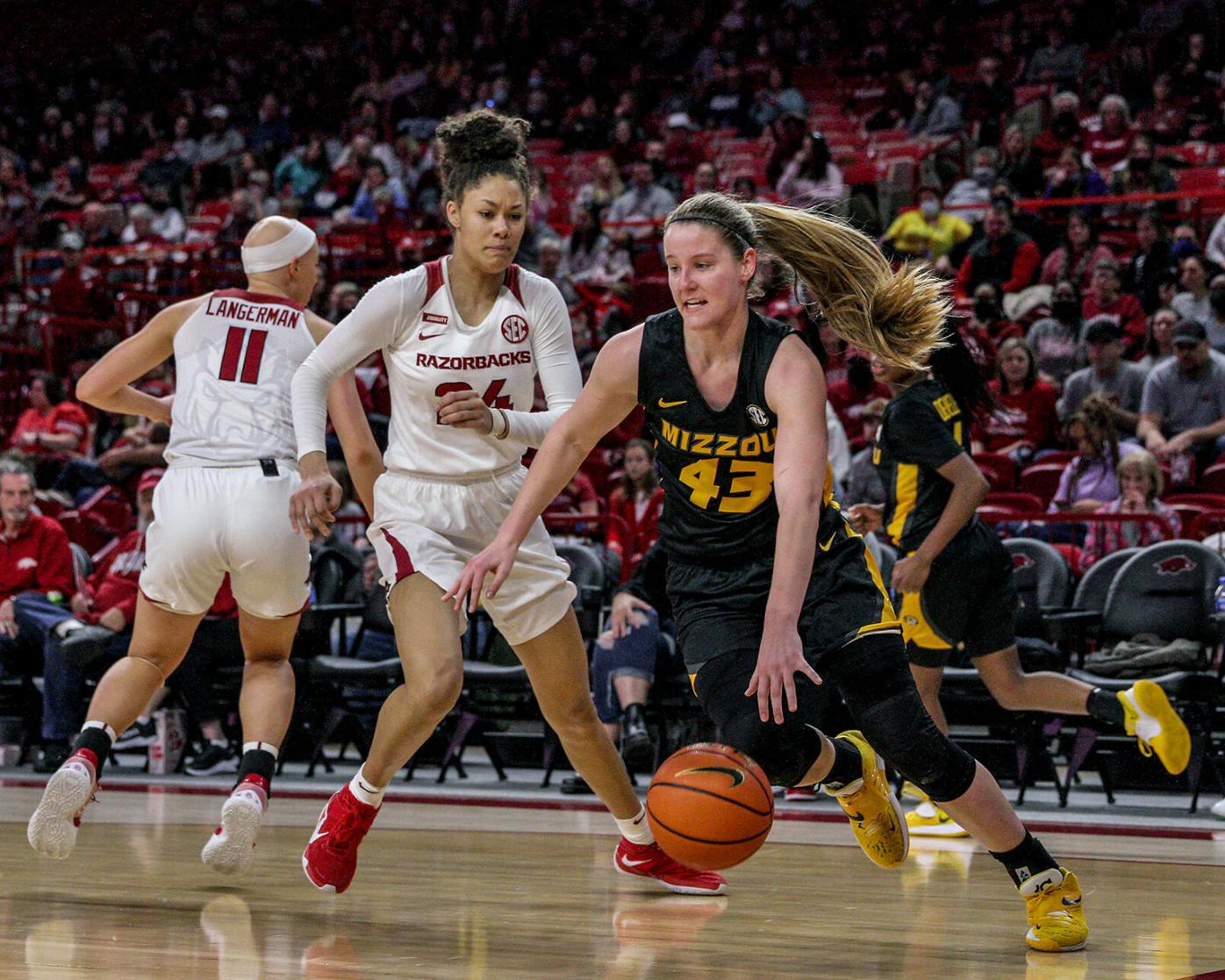 Missouri forward Hayley Frank drives in for a lay-up during Arkansas' win over Missouri on Sunday at Bud Walton Arena in Fayetteville, Ark. Frank led Missouri with 22 points.

MU guard Aijha Blackwell saves the ball from going out of bounds during Arkansas’ win over MU on Sunday at Bud Walton Arena in Fayetteville, Ark. MU’s next game is against LSU on Thursday.

Missouri guard Mama Dembele eyes the basket for a free throw during Arkansas' win over Missouri on Sunday at Bud Walton Arena in Fayetteville, Ark. Dembele had 16 points and shot 3-3 from beyond the arc.

Missouri forward Hayley Frank drives in for a lay-up during Arkansas' win over Missouri on Sunday at Bud Walton Arena in Fayetteville, Ark. Frank led Missouri with 22 points.

In a league as tough as the Southeastern Conference this year, Missouri women’s basketball head coach Robin Pingeton knows winning on the road is going to be tough.

“Every game you play is going to be a battle,” she said. “Anything can happen on any given night.”

The first quarter started at a frantic pace, which wasn’t surprising given the two teams’ love of getting up and down the court. While there were a lot of possessions, both teams struggled to knock down shots early.

That changed for Arkansas in the second half of the period as Sasha Goforth got the Hogs going with five early points. While its opponents found a rhythm, Missouri couldn’t get anything going offensively. The Tigers had problems finishing around the rim with LaDazhia Williams and Aijha Blackwell struggling with the length of the Razorback forwards.

Those difficulties in the paint continue in the second quarter. Missouri shot just 5 of 17 from inside the arc in the first half and compounded that with nine turnovers compared to one for Arkansas.

The Razorbacks offense turned it up a level in the second period. The Hogs got whatever they wanted on the court. They finished the first half shooting 53% from the field and made seven 3s. Guard Makayla Daniels led the way for Arkansas with 11 in the first half as they built up a 17-point lead at the break.

Pingeton was not happy with how comfortable the Razorbacks were on offense in the first half.

In the second half, the Tigers made it a point to get to the basket. Their second half aggressiveness led to better possessions on the offensive end as they tried to chip away at the daunting deficit.

Unfortunately for Missouri, Arkansas guard Rylee Langerman came to play. The sophomore guard came in averaging 2.9 points per game but exploded for 17 Sunday afternoon including some timely second half shots that kept the Tigers from coming back.

Langerman was part of a backcourt that was fantastic for Arkansas along with Daniels and Amber Ramirez who all scored in double figures while helping the Razorbacks turn the ball over only twice.

The Hogs guards weren’t the only ones who had an excellent game, Mama Dembele continued to show her impressive development on the offensive end. She finished with a career high 16 points on just seven shots while providing five assists to her teammates. Her 3 with more than eight minutes cut the lead to nine but the Tigers never got closer than that. Hayley Frank gave Missouri a boost as well. She added a game high 22 points on 13 shots, continuing her excellent form to start SEC play.

It was not enough though as Arkansas iced the game with free throws from Ramirez. She led the Razorbacks with 21 points while contributing six rebounds and four assists.

While Pingeton said it’s not an excuse, the Tigers were short handed once again Sunday. Missouri was without starting guard Haley Troup for a second consecutive game and forward LaDazhia Williams couldn’t play the second half against Arkansas. Missouri missed both on the court for different reasons.

For Williams, who was complaining of pain in her groin according to Pingeton, an injury came at a horrible time as she was coming into form during the start of SEC play.

“She (Williams) has been playing with great pace and rhythm,” Pingeton said. “Her length and size being unavailable at both ends of the floor hurt us for sure.”

MU hits the road for the second consecutive game, taking on No. 12 LSU. It has taken just two months for coaching icon Kim Mulkey to revitalize that program, with the Tigers 15-2, 3-1 after their 76-48 win over Auburn.

Given the tough opponent, Pingeton knows that improvements need to come.

“We’re going to have some painful film to watch but this game is something we’ll learn from and build on,” she said.

How to watch: SEC Network +