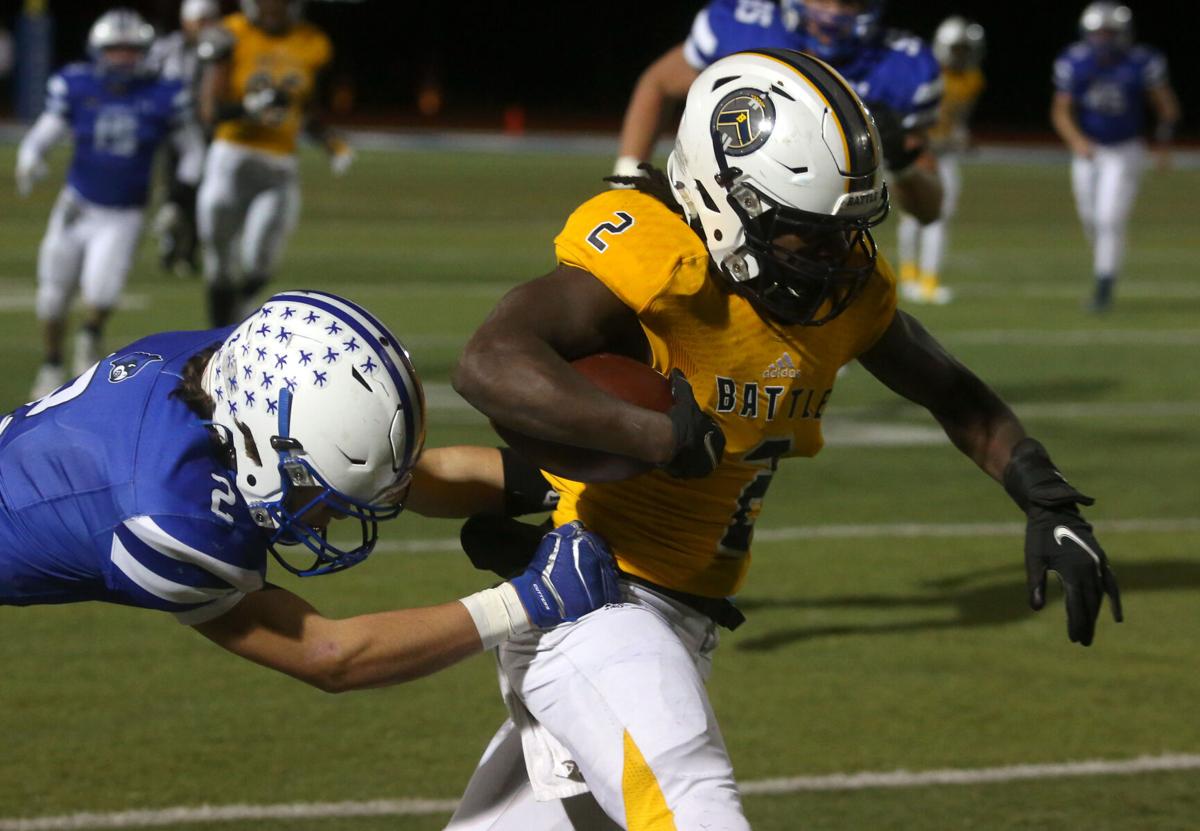 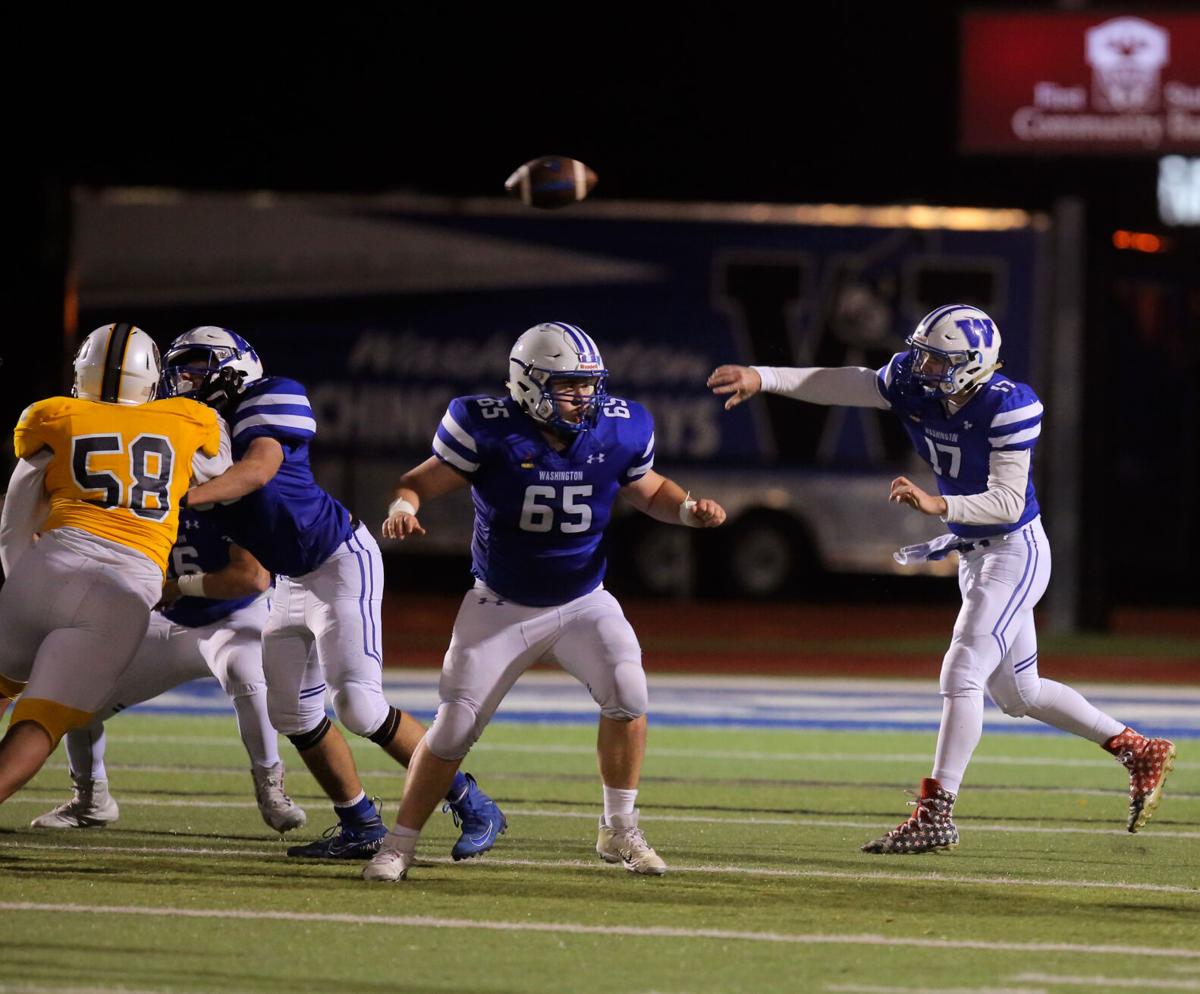 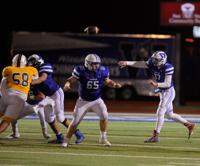 Washington junior Cam Millheiser throws a pass in the third quarter during a game against Battle High School on Friday in Washington, Mo. Washington finished their season with a record of 9-2. 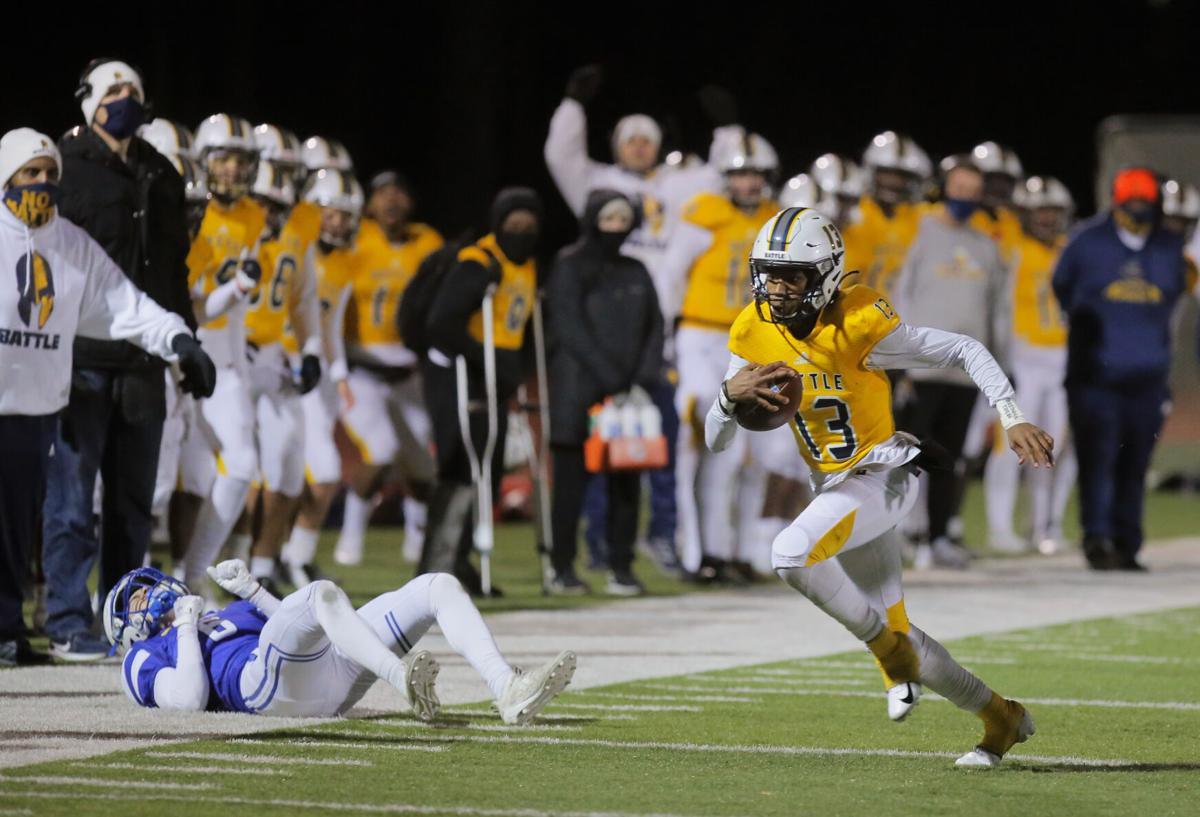 Battle senior Khaleel Dampier, right, runs out of bounds while carrying the ball Friday in Washington, Mo. The Spartans won 27-7 to register their sixth district title in seven years. 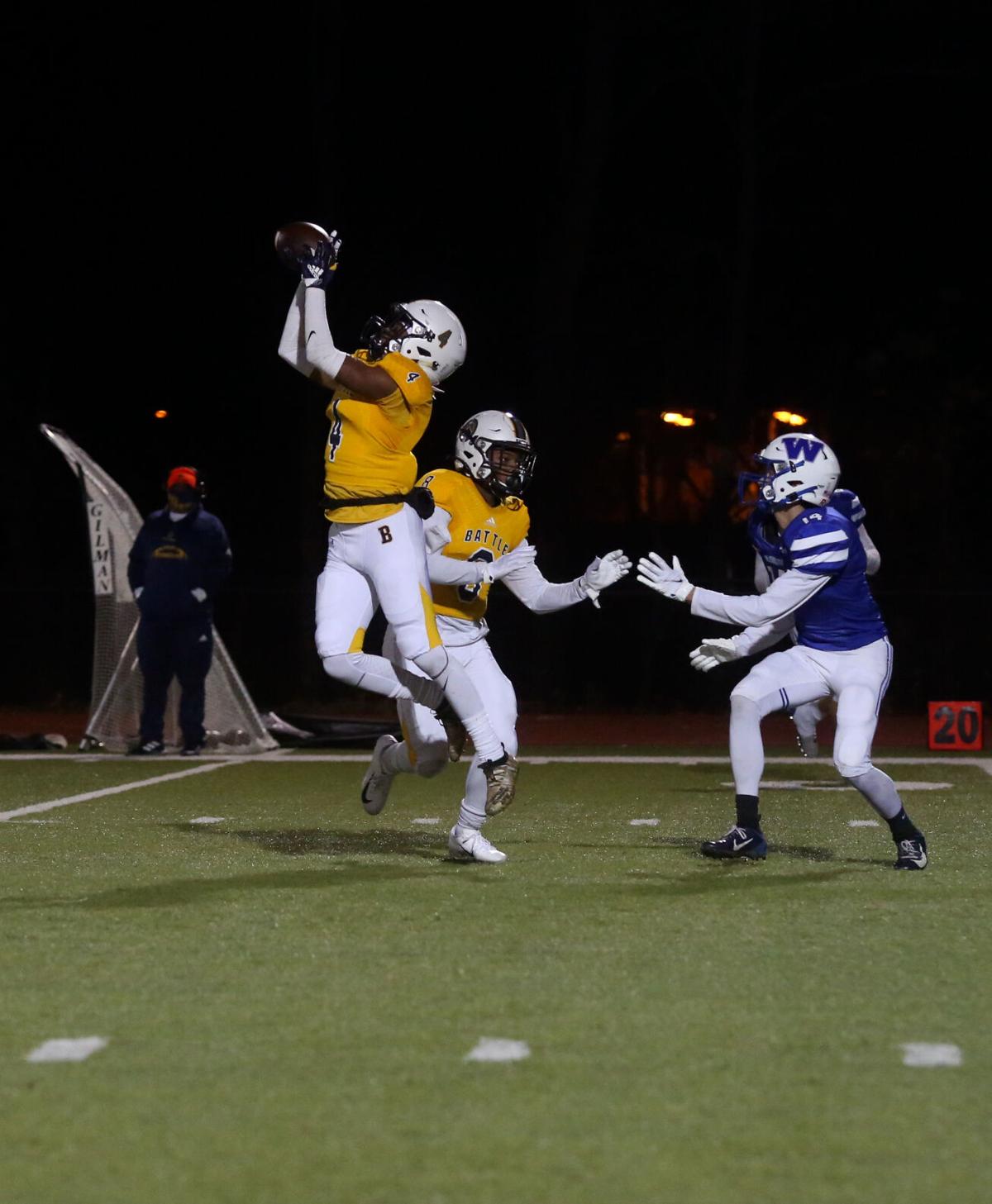 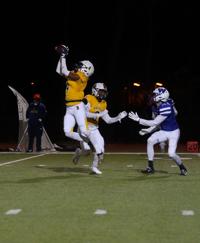 Washington junior Cam Millheiser throws a pass in the third quarter during a game against Battle High School on Friday in Washington, Mo. Washington finished their season with a record of 9-2.

Battle senior Khaleel Dampier, right, runs out of bounds while carrying the ball Friday in Washington, Mo. The Spartans won 27-7 to register their sixth district title in seven years.

With 1:07 left in the Class 5 District 4 championship game, shouts and shrieks arose from the Battle sideline.

Coach Atiyyah Ellison was doing his best not to get drenched as a group of his players, led by backup quarterback Justin Goolsby, attempted to dump buckets of water on him.

“I saw the first guy,” Ellison said, “and then they had like two or three more ready, so they got me. I didn’t want to run on the field.”

Battle beat Washington 27-7 for the Class 5 District 4 title, Ellison’s first as head coach and the school’s sixth since its inception. Half-soaked and in near-freezing weather was how Ellison accepted the district plaque alongside his team.

“Fun” was a word the second-year head coach used to describe the evening several times. Even though the Spartans (8-1) still did their seven pushups for the seven points the Blue Jays (7-2) scored, the mood postgame was overwhelmingly celebratory as players tackled each other playfully on the sidelines and photobombed each other’s pictures.

“It feels great,” senior Kendrick Harris said. “We missed out on the opportunity last year, but we’re here, we’re a new team. I’d say we’re tighter, we’re more of a family, and we knew we had to do it for each other to get this championship.”

Though the Spartans were technically the underdogs in both actual size and district seeding, it didn’t show on the field.

“It’s all that thing that’s beating in your chest,” Ellison said. “That’s all that matters. There’s a lot of big people. That don’t mean necessarily they’re gonna be physical, and it’s harder for a bigger guy to get low and get some push.”

Battle got out to a hot start, with Gerry Marteen Jr. scoring on the first snap from scrimmage with a 71-yard run. After the Spartans defense forced and recovered a Washington fumble on the Blue Jays’ second play, Marteen scored again on a 38-yard run. Two successful extra points by Vojtech Drda put Battle up 14-0 within the first two minutes of the game.

“We faced a tough opponent,” Marteen said. “I feel like getting out the gate early was something that we needed, and (we) played strong throughout the whole game.”

After the initial burst, though, Battle cooled down. The Spartans gave up the ball three times in the first half: once on a muffed punt return, another on a fumble and the third on an interception by Khaleel Dampier.

The blunders caused Battle’s offense to falter, and offensive momentum was virtually nonexistent all the way through the end of the third quarter. It’s a struggle the Spartans have faced several times this season, including in their semifinal win against Rolla.

“I think it was just the intensity dialed down,” Marteen said. “We’d seen that we were up a lot in the first half. I think that we need to do better at coming more intense second half and being able to go out and put points on the board.”

While Battle’s defense didn’t have as headline-worthy of a game as it did against Rolla, it still managed to hold its own, keeping Washington scoreless through the third quarter. The Spartans finally gave up a touchdown on a 54-yard pass at the start of the fourth.

“We were just easing our foot off the gas pedal,” Harris said. “It’s been happening for a while, and we just got to do better keeping our foot on their neck.”

That Blue Jays touchdown seemed to be what the Spartans needed to kick them back into gear, though. Both sides of the ball played strong second halves, with Marteen adding his third touchdown of the night on the drive following Washington’s score. Dampier added the team’s fourth touchdown with a 21-yard run on the following drive.

“He’s come into his own when it counts,” Ellison said. “This is when you want to peak. You want to peak at the end of the season. Hopefully, the rest of guys haven’t played their best football ’cause we’re gonna need more of that going forward.”

Long after Battle received its plaque, Ellison was able to seperate himself to get a head start on gathering the team’s equipment as his assistant coaches and players continued celebrating. For some of them, it was the second or third district championship they’d won as Spartans. For others, it was just their first.

“There’s a lot of men and young men that earned those titles,” Ellison said. “Like I said, I wanted one under my name but I definitely didn’t do it alone. All my assistant coaches are great. We got like two or three guys who could be head coaches on other teams. They make me look a lot better than I am.”

For once, Ellison wasn’t quick to start thinking about what comes next: a Class 5 state quarterfinal game against Fort Zumwalt North, which knocked the Spartans off in last year’s district championship. Instead, he “had to smile a bit and enjoy it,” adding, of course, that the team would be back to business Monday.

“You can’t buy this,” he said. “They fought so hard, and I work ’em hard. It’s not easy playing for me at times. I’m really demanding. So for them to get a taste of this, hopefully that drives them to the last game of the season.”