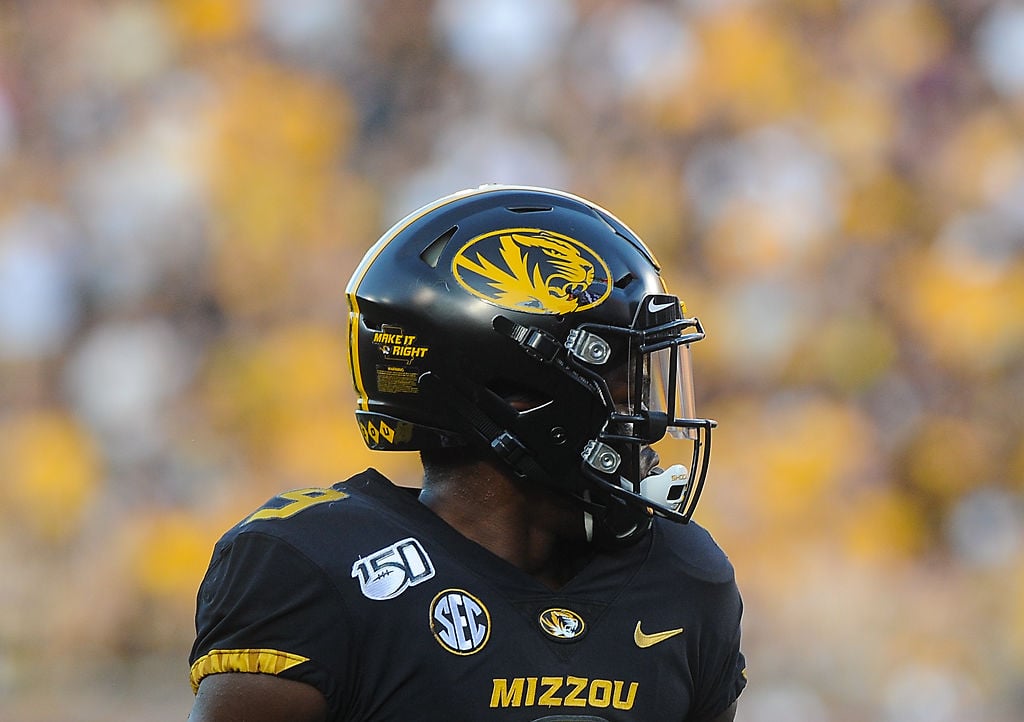 As part of Missouri’s “Make it Right” campaign, athletes wore a sticker for the campaign on the backs of their helmets for the duration of the 2019 football season. Missouri’s appeal of the NCAA sanctions was denied Tuesday, Nov. 26. The sanctions will prevent MU football, baseball and softball teams from competing in postseason play. 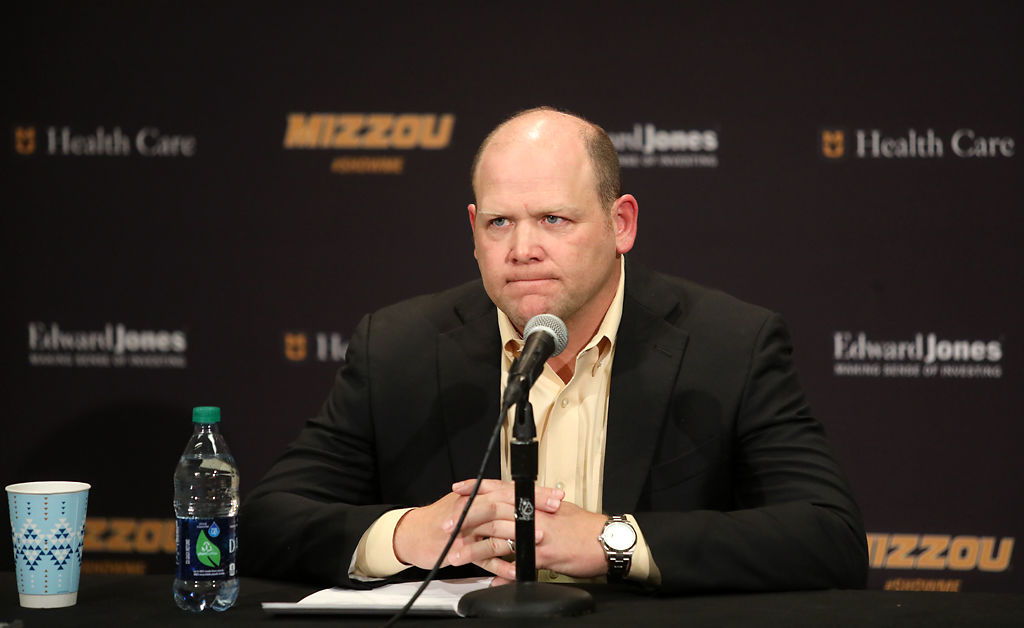 Former Missouri head football coach Barry Odom speaks at a press conference ,Feb. 1, 2019, at Mizzou Arena, the day after the announcement of the NCAA's Committee on Infractions imposed sanctions to the Missouri football, baseball and softball programs due to academic fraud. 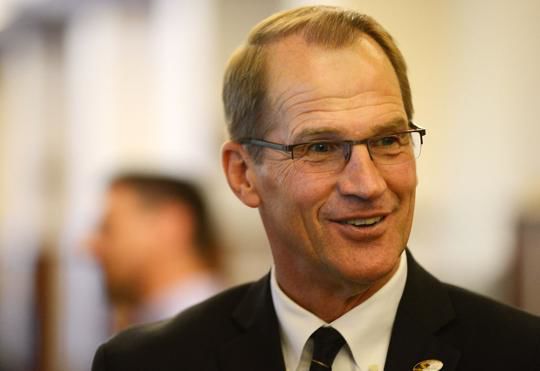 Missouri athletic director Jim Sterk led Missouri's "Make it Right" campaign following NCAA sanctions handed down in 2019. The campaign included a number of formats including billboards along Interstate-70, Missouri apparel and a website.

As part of Missouri’s “Make it Right” campaign, athletes wore a sticker for the campaign on the backs of their helmets for the duration of the 2019 football season. Missouri’s appeal of the NCAA sanctions was denied Tuesday, Nov. 26. The sanctions will prevent MU football, baseball and softball teams from competing in postseason play.

In the days and weeks that followed Jan. 31, 2019, the marketing staff inside Missouri’s athletic department offices went to work. It had to do something.

Already, in the wake of sanctions levied by the NCAA on the school’s football, baseball and softball programs over academic misconduct, the university’s athletic department had offered up a series of public rebukes of the organization that determined its penalties.

Athletic Director Jim Sterk said the school was “shocked and dismayed” and that the NCAA’s Committee on Infractions “abused its discretion.” Head football coach Barry Odom called the penalties “unjust and unfair;” university officials such as Board of Curators member Jon Sundvold and politicians such as Senator Roy Blunt slammed the NCAA ruling, as well. The school immediately announced its plans to appeal what University Chancellor Alexander Cartwright deemed a “harsh and inconsistent” decision.

Yet still, as Missouri grappled with the sanctions, the athletic department put forth a response more direct and more public than any of the others. It wanted to take a hefty swing at the NCAA. It wanted to capitalize on the national fervor that the sanctions had stirred, too, and to maintain the focus on Missouri’s fight during what would become a 10-month appeal process.

And so came “Make it Right,” the aggressive marketing campaign designed to take on the NCAA. In essence, the university declared war.

Soon, the slogan was plastered on billboards along Interstate 70 and on T-shirts, wristbands and all other sorts of apparel inside the university bookstore. The campaign had its own page on the athletic department’s website, with fundraising information prominently placed. When Missouri’s football team took the field this fall, the players wore helmets with “Make it Right” stickers slapped on the back.

The campaign — and the scathing words from university officials such as Sterk, Odom and Cartwright that came with it — formed maybe the most powerful rebuff a member university has ever taken toward its athletic department's governing organization. While plenty of schools have expressed displeasure with the NCAA, increasingly so in recent years, few have  admonished and attacked the association so directly and so consistently.

So did it work?

Did Missouri even think it would work? That short answer is also no.

"Is it going to make a difference?" Joos said in October. "I don’t even know the if the five people deciding the appeal are aware of it."

Inside the MU athletics offices, it was at least as much an effort to galvanize the fanbase as an attempt to lobby the NCAA's Infractions Appeals Committee. In that context MU succeeded; not so much on the appeal.

Last Tuesday, nearly 300 days after the sanctions were first announced, the NCAA denied Missouri's appeal, upholding postseason bans and recruiting and scholarship restrictions for the three teams cited in the investigation. In terms of an impact on the appeals process, “Make it Right” failed.

But the university’s approach in taking on the NCAA — whatever the true intention was — will live on. “Make it Right” didn’t work for Missouri in the end, but it sparked a greater conversation. Its legacy will extend far beyond Columbia.

In fact, it already has.

Missouri’s appeal and the campaign that came with it was not successful, but others around the NCAA landscape took notice of the effort.

In the months since Missouri took its hard line, other schools have followed suit. When Kansas received a notice of allegations in October, men’s basketball coach Bill Self and athletic director Jeff Long said they were prepared for a fight. North Carolina State, which is also under a federal investigation for potential violations in its men’s basketball program, has dug in against the NCAA, as well.

Other universities across the country are becoming emboldened in attacking the NCAA in the face of their own wrongdoing, especially as the court of public opinion increasingly seems to be questioning the association's credibility. From a tactical standpoint, taking on the NCAA has become the chosen strategy, one that has come with few consequences.

“It’s taking control of the narrative,” said Jim Rocco, Director of Marketing and PR for PRCG Sports. “You can try to steer public sentiment your way in the public arena. It’s a safe strategy, really. The only real danger with doing that is you live by the sword and die by the sword. If something else comes out later on that proves that you were in the wrong, then you’ve shot yourself in the foot.”

No school has taken the baton from Missouri quite like Cal Poly-San Luis Obispo did, and maybe there's a reason. Cal Poly athletic director Don Oberhelman has known Sterk for much of his career and worked with him at San Diego State when Sterk served as the Aztecs’ athletic director.

When Missouri received its sanctions and embarked on its appeal, Sterk and Oberhelman spoke regularly, discussing the ins and outs of the process. Then in April, Cal Poly received sanctions of its own for misuse of textbook stipends, and suddenly Oberhelman found himself in Sterk's shoes.

Cal Poly's smaller athletic department had fewer resources for a fight, but Oberhelman still had his words, and like Sterk he went on the offensive ahead of Cal Poly’s October appeal. He called the NCAA’s decision “despicable” in an October interview with the San Luis Obispo Tribune.

While Sterk and Oberhelman and crisis managers such as Rocco see the aggressive approach toward the NCAA as viable, they also see the flaws in the construct.

In going after the NCAA, schools like Missouri and Cal Poly are taking on an organization in which they are members. Further, their attacks are being directed at the organization from which their schools are seeking relief. And while it’s unlikely that Sterk and Oberhelman’s strong rebukes had an adverse effect on their respective appeals, there are risks involved and relationships to consider.

“To make these comments, we’re kind of attacking the structure we exist within,” said Oberhelman, who per NCAA rules declined to discuss the specifics of Cal Poly’s case. “Those are hard things to do. There are friendships, peers, relationships. But when that system fails you, I don’t know what option you have other than to speak the truth.”

The timing of Missouri’s campaign and approach, as well as others like it, is important to the ever-changing conversation surrounding the NCAA, as well.

The months from when Missouri received its sanctions to when its appeal was formally denied were not particularly good ones for the association. The suspension of Memphis basketball star James Wiseman for accepting money in high school and California’s passage of the Fair Pay to Play Act — which will allow student-athletes to collect money from endorsement deals without fear of losing their NCAA eligibility or scholarships — have stoked flames around the biggest issues surrounding college athletics and seem to have the NCAA in something of a scramble mode.

The discourse and shifting public opinion around the NCAA and college sports as a whole has, to some, left the association vulnerable. While attacks such as Missouri’s and Cal Poly’s are not directly related to the issue of compensating athletes, they are each part of a larger conversation being held in the world of college sports as the power dynamics appear to be shifting away from the NCAA.

“People are wondering: Is the NCAA, as a governing body, still in the best position to oversee collegiate athletics?” Eric Rose, a crisis strategist at Englander Knabe and Allen in Los Angeles, said. “There’s a bigger conversation in sports going on about the NCAA’s role in collegiate athletics. What happened to Missouri is symptomatic of what many people feel is wrong about a system that is arbitrary.”

In Columbia, Missouri’s appeal and the “Make it Right” campaign will be remembered for the long wait the school and its fans endured, the perceived injustice of the sanctions themselves, and their ultimate failure. The reality of December 2019 is no different than it was in January 2019, other than the time, money and energy targeted at sanctions that were never overturned.

But nationally, Missouri’s efforts sparked broader discussion and spurred change. The impact can be seen already in the way schools are dealing with the NCAA from North Carolina State to Kansas all the way to Cal Poly. The way schools are taking on the NCAA is shifting and Missouri played a significant role in making that happen.

Missouri’s approach toward the NCAA lends credence to what many have considered the association to be for a long time: a dinosaur. At the very least, the ordeal offers more evidence that major structural change is necessary. At worst, this latest NCAA tribulation calls into question the viability of the association as a judicial body.

How much "Make it Right" truly shifted things isn't clear yet; but even in what ended as a loss, the school might have found itself on the crest of a wave that could shape the future of college sports.

“If the system remains as it is now, I think this will be the new normal,” Oberhelman said. “The more athletic directors lose faith in the system, the more likely it is that we’ll have more responses like these. And the association will have had a heavy hand in its own crumbling.”