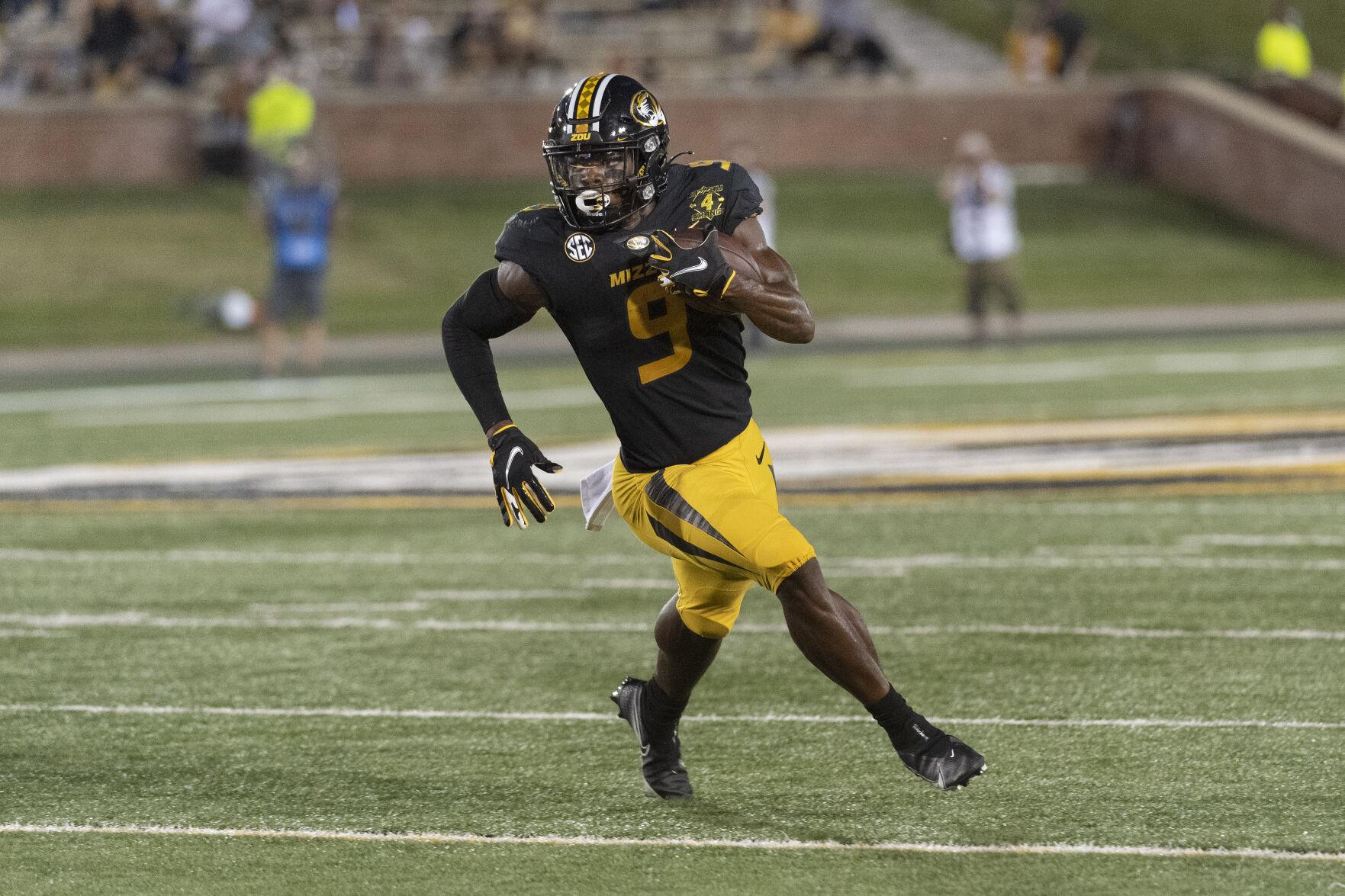 Missouri wide receiver Jalen Knox runs with the ball during the second half of the Tigers’ 38-19 loss to Alabama on Sept. 26 in Columbia. 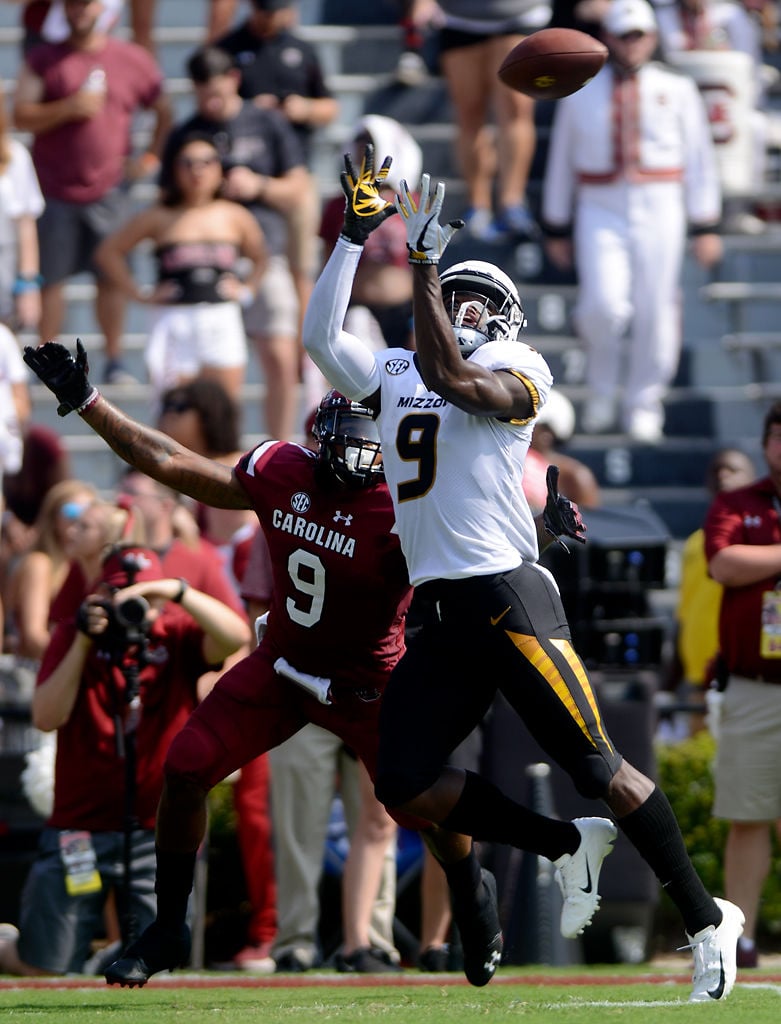 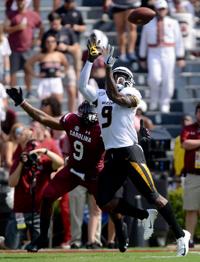 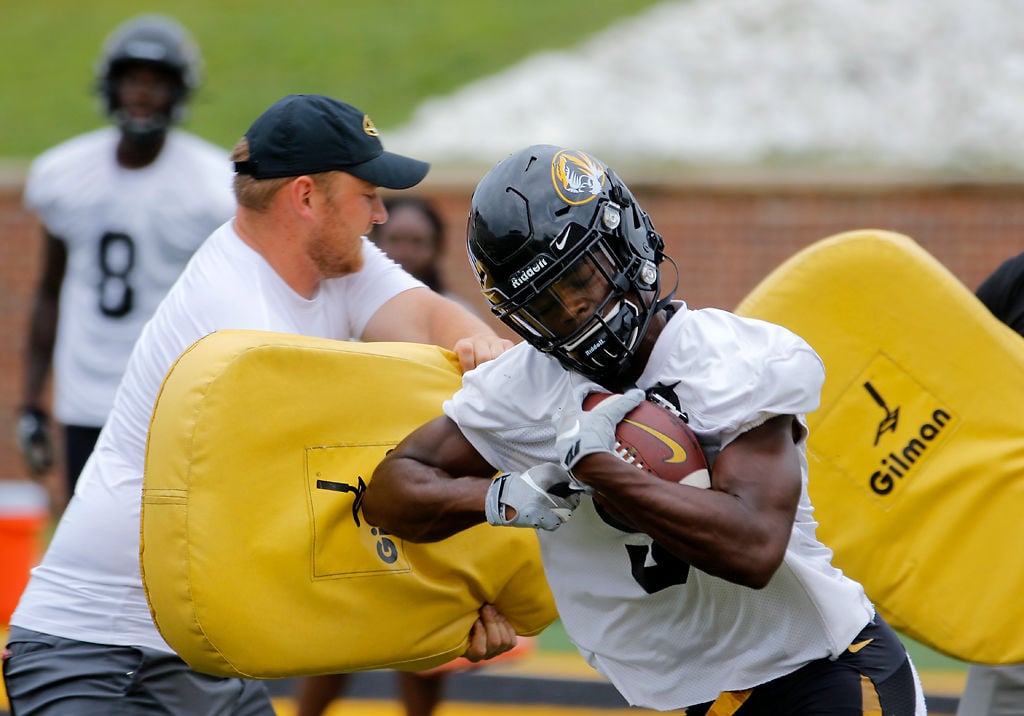 Missouri wide receiver Jalen Knox pushes through a pair of tackle dummies during a catch and run drill at practice Aug. 12, 2019 at Faurot Field in Memorial Stadium. 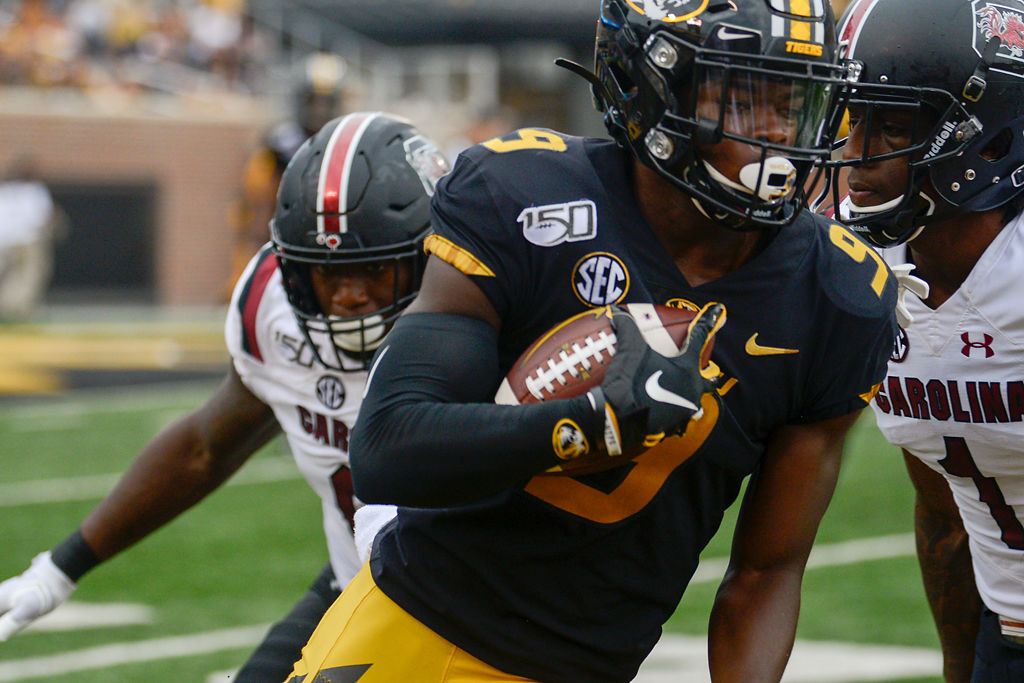 Missouri wide receiver Jalen Knox runs after a catch in the first half of Missouri’s matchup with South Carolina last season on Faurot Field in Columbia. After a breakout freshman campaign, Knox struggled in 2019. He’s back on track this season under new coach Eliah Drinkwitz.

Missouri wide receiver Jalen Knox runs with the ball during the second half of the Tigers’ 38-19 loss to Alabama on Sept. 26 in Columbia.

Missouri wide receiver Jalen Knox pushes through a pair of tackle dummies during a catch and run drill at practice Aug. 12, 2019 at Faurot Field in Memorial Stadium.

Missouri wide receiver Jalen Knox runs after a catch in the first half of Missouri’s matchup with South Carolina last season on Faurot Field in Columbia. After a breakout freshman campaign, Knox struggled in 2019. He’s back on track this season under new coach Eliah Drinkwitz.

When Missouri coach Eliah Drinkwitz was putting together his new offense, a lot of the changes centered around one question.

“How do you utilize your skill players and your schemes in order to get guys in space with the ball in their hands?” Drinkwitz said.

Answering that question meant a position change for Missouri’s most productive returning wide receiver, junior Jalen Knox. Drinkwitz moved Knox into the slot while adding transfer receivers Damon Hazelton and Keke Chism, and Knox has found a comfortable home in his new role.

Knox has become a do-everything player for Missouri. He’s caught screen passes, taken handoffs on jet sweeps and run routes from the slot and occasionally on the outside as the most versatile player on offense. Knox has excelled in that new role, with 324 total yards this season. He’s currently the team’s leader in reception, with 24, and receiving yards, with 243.

Just like the rest of the offense, Knox had an uninspiring performance against South Carolina on Saturday, with 10 yards on three touches, but heading into the game he was the only Missouri player besides Larry Rountree to have 50 yards from scrimmage in each of the team’s first five games. According to Pro Football Focus, Knox is the offense’s second-highest-graded player (77.8), behind tackle Larry Borom, who has missed the last two games with an injury.

Drinkwitz talked with Knox about changing roles to showcase Knox’s speed even before the transfers of Chism and Hazelton. Knox joined the indoor track team as a sprinter last winter. In his first collegiate meet, Knox ran a 21.86-second 200-meter dash, making him the team’s third-fastest runner at that distance before the COVID-19 pandemic cut short the indoor season and canceled the entire outdoor season.

To give Knox the best chance to show off that speed, Drinkwitz moved him to a role closer to what he played in high school. At Mansfield Timberview in Texas, Knox mainly played running back but shifted all over the field to get the ball in unique ways.

Knox had 419 yards and three touchdowns as a freshman, earning SEC Freshman of the Week honors after the team’s early-season win at Purdue.

In his second season, he had only 19 catches for 307 yards in an underwhelming campaign after being one of the team’s top returning receivers. Knox struggled to get open consistently on the outside. He didn’t have many open-field touches because he was mostly used as a downfield passing option for new Missouri quarterback Kelly Bryant. After his move inside this year, that hasn’t been as much of a problem.

“In the slot, it’s more open field,” Knox said. “I can just run around and use my speed to get open.”

Knox has shown that speed on many occasions, including an end-around touchdown in Missouri’s upset win over LSU on Oct. 10. Knox sped by a linebacker in the open field at the line of scrimmage and then beat three other LSU defenders in a footrace to the pylon for a 16-yard score.

“Getting the ball in open space and making stuff happen is second nature for me,” Knox said.

On a personal level, the position change also changed his mindset. After his sophomore slump, Knox said he changed his practice habits and improved in his maturity and work ethic.

Now, Knox has grown into his new role and has increased confidence in the new offense.

“I know (Drinkwitz) has a plan for what we’re going to do,” Knox said. “I trust his plan, so I’m about to go out there and do everything I can to make his plan work. I’m motivated. I enjoy playing football this year.”

Another schedule switch brings in Vandy; Commodores could add a bit of history

COVID-19 prompts another schedule adjustment for MU, as Tigers prepare for Vandy. And the winless Commodores could use a women's soccer goalkeeper as their kicker Saturday.