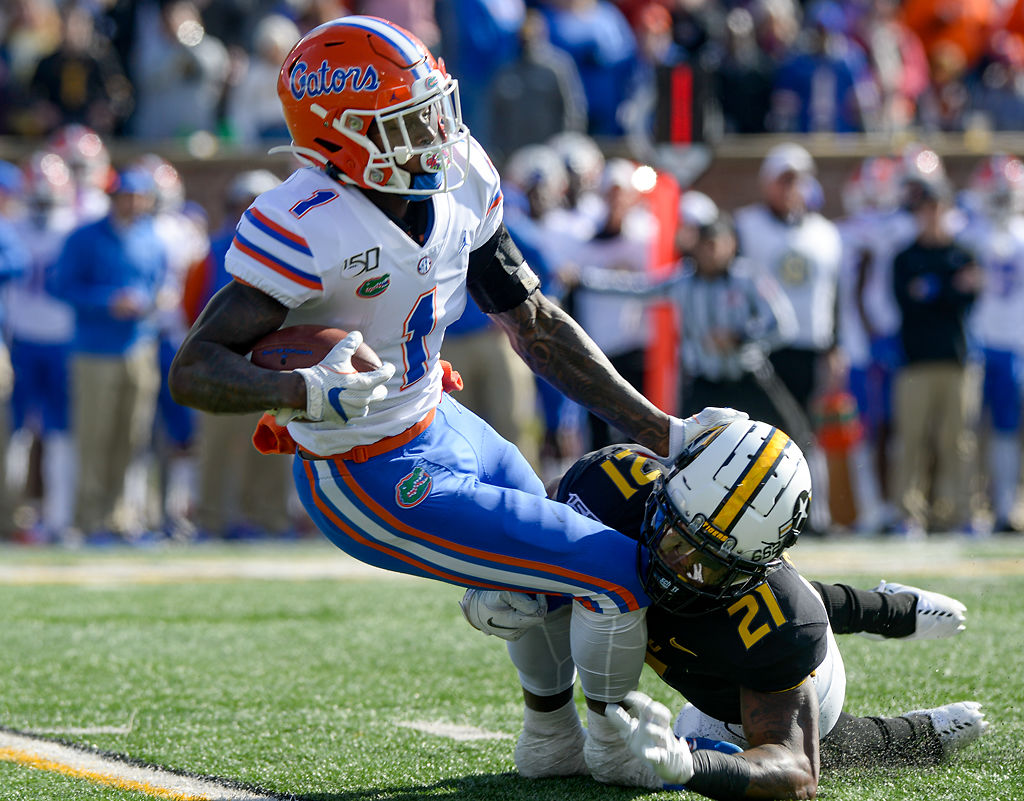 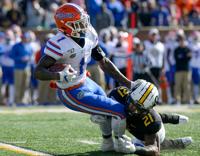 Florida running back Kadarius Toney is brought to the ground by Missouri defensive back Christian Holmes as Missouri takes on Florida on Nov. 16 in Columbia. Florida and Missouri both have two wins so far this season going into their matchup Saturday. 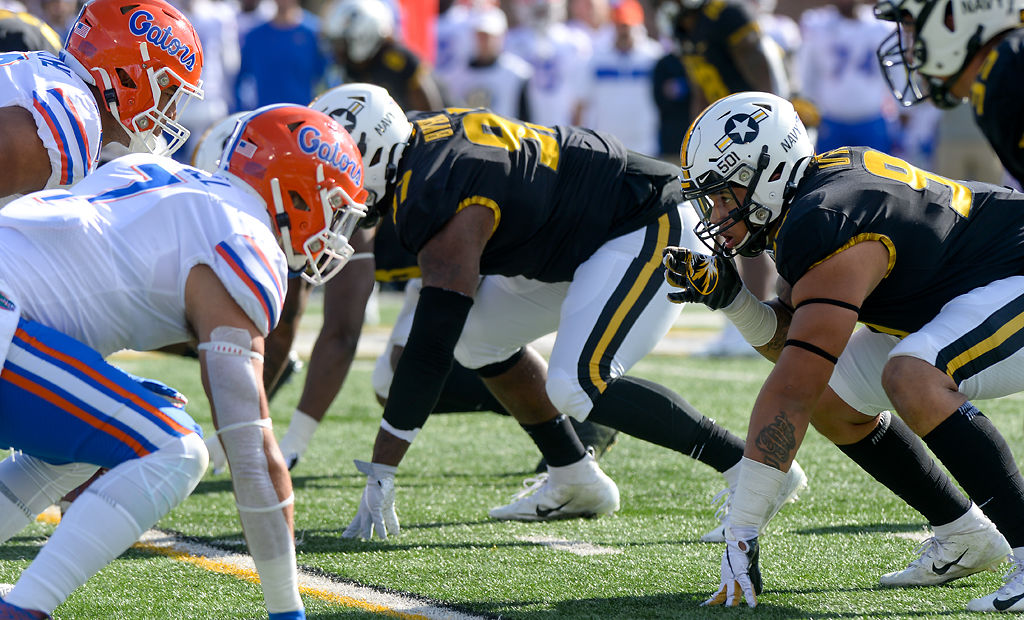 Missouri defensive lineman Markell Utsey (right) anticipates the ball being snapped as Missouri takes on Florida on Nov. 16 in Columbia. Missouri is set to take on a Florida team that is top-five in both yards and points per game in the SEC on Saturday.

Florida running back Kadarius Toney is brought to the ground by Missouri defensive back Christian Holmes as Missouri takes on Florida on Nov. 16 in Columbia. Florida and Missouri both have two wins so far this season going into their matchup Saturday.

Missouri defensive lineman Markell Utsey (right) anticipates the ball being snapped as Missouri takes on Florida on Nov. 16 in Columbia. Missouri is set to take on a Florida team that is top-five in both yards and points per game in the SEC on Saturday.

When Missouri hits Steve Spurrier Field at Ben Hill Griffin Stadium, it will be in the aftermath of an odd few weeks for its opponent.

Back on Oct. 10, fresh off a 41-38 loss to No. 8 Texas A&M, Florida coach Dan Mullen was quick to note the Aggies’ home-field advantage and how much he wanted the same for the Gators’ next matchup against LSU.

The state of Florida recorded 2,908 new cases of COVID-19 and 118 COVID-19-related deaths the day prior. Regardless, Mullen’s point would soon prove moot. Florida athletic director Scott Stricklin annonced three days later that the Gators would suspend all football activities because of an increase in positive COVID-19 tests within the program.

Florida’s student newspaper, The Alligator, reported that day that 19 players tested positive. In the days following, two assistant coaches and Mullen himself would test positive. Florida would postpone its Oct. 17 matchup with LSU and move it to Dec. 12. It also caused a shift in the SEC’s schedule and pushed the Missouri matchup from Oct. 24 to Halloween night.

The Gators resumed team activities Monday. Mullen also disclosed that 37 players have tested positive for the coronavirus in the month of October. The coach would not “confirm or deny anything” when it came to health-related questions in his Monday press conference, but he clarified that Florida would have at least the minimum 53 scholarship players available for this week’s matchup with the Tigers, despite adding six positive cases within the program on the same day.

Missouri coach Eliah Drinkwitz said Tuesday that he’d “just play that game, I guess,” in reference to Mullen’s Monday press conference and that he wouldn’t disclose who was out with injuries for this week’s game.

Although the Tigers will be “a class down of scholarship football players” Drinkwitz said Tuesday, the 64 scholarship players Missouri will have suit up Saturday in Gainesville is only two fewer than the Tigers had against Kentucky a week prior.

Despite Missouri’s opponent this week being its most COVID-impacted yet, Drinkwitz doesn’t do much to anticipate just who will be absent from the matchup.

“I don’t really worry about it,” he said. “There’s no way to know, so you just go in assuming they’ll be at full strength. And we know the challenges we have. We know what kind of schemes they’re going to try to run and we’ll adjust while we’re in the game, but I don’t think we’re going to act like they’re not going to have their best guys.”

If the Tigers are taking on Florida at its best come Saturday, they’ll be tasked with taking down one of the toughest offenses in the country.

Even without games these last two weeks, Trask leads the SEC in passing touchdowns with 14, and he’s No. 7 in the conference in passing yards.

Pitts has been one of Trask’s top targets, hauling in 17 of his quarterback’s 74 completions through three games.

He also leads the Gators in touchdown catches and is averaging 91.33 receiving yards per game.

“(Mullen) utilizes Pitts like they do (San Francisco 49ers tight end George)Kittle and like they do (Kansas City Chiefs tight end) Travis Kelce and some of the other great ones,” Drinkwitz said, noting that Pitts is often lined up in mismatches in one-on-one coverage, whether against opposing linebackers or safeties.

However, Pitts isn’t the only receiving threat in Trask’s arsenal.

Senior receiver Kadarius Toney leads the Gators in receptions so far this season with 18 for 237 yards.

Missouri is coming off a week in which it shut down a one-dimensional Kentucky offense in a 20-10 win, allowing 145 total yards and just 50 through the air. But Florida may be Missouri’s most daunting matchup since Week 1 against Alabama.

And although Missouri is a double-digit underdog against the 2-1 Gators, a win this Saturday could vault the 2-2 Tigers into serious contention for the SEC East. 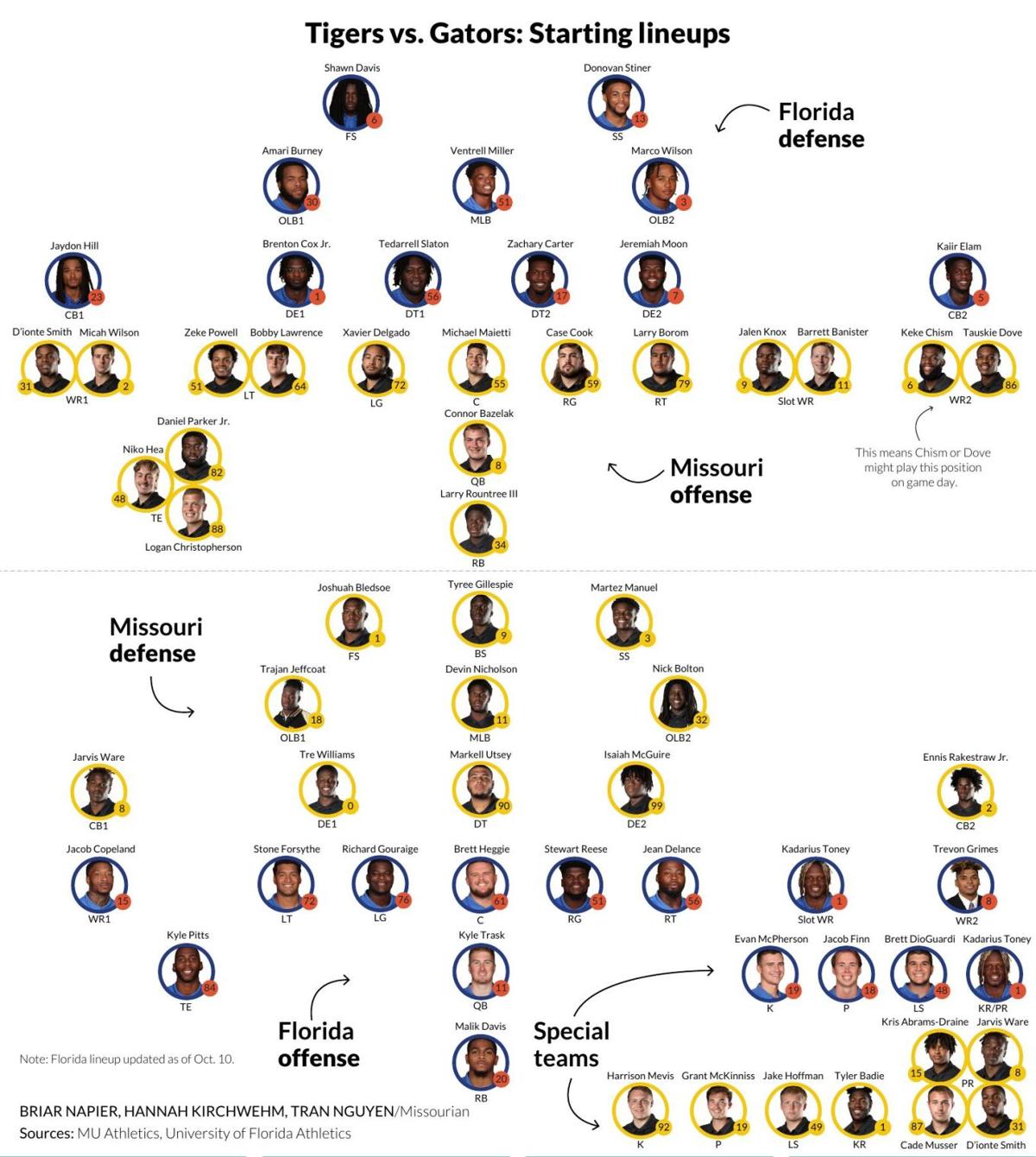 Their son’s decision to play football at MU led to the Nathans moving to Columbia and opening a new barbecue restaurant.

Chiefs' Mahomes takes most of snaps in Thursday practice

All eyes on QBs as Packers host Bucs for NFC championship