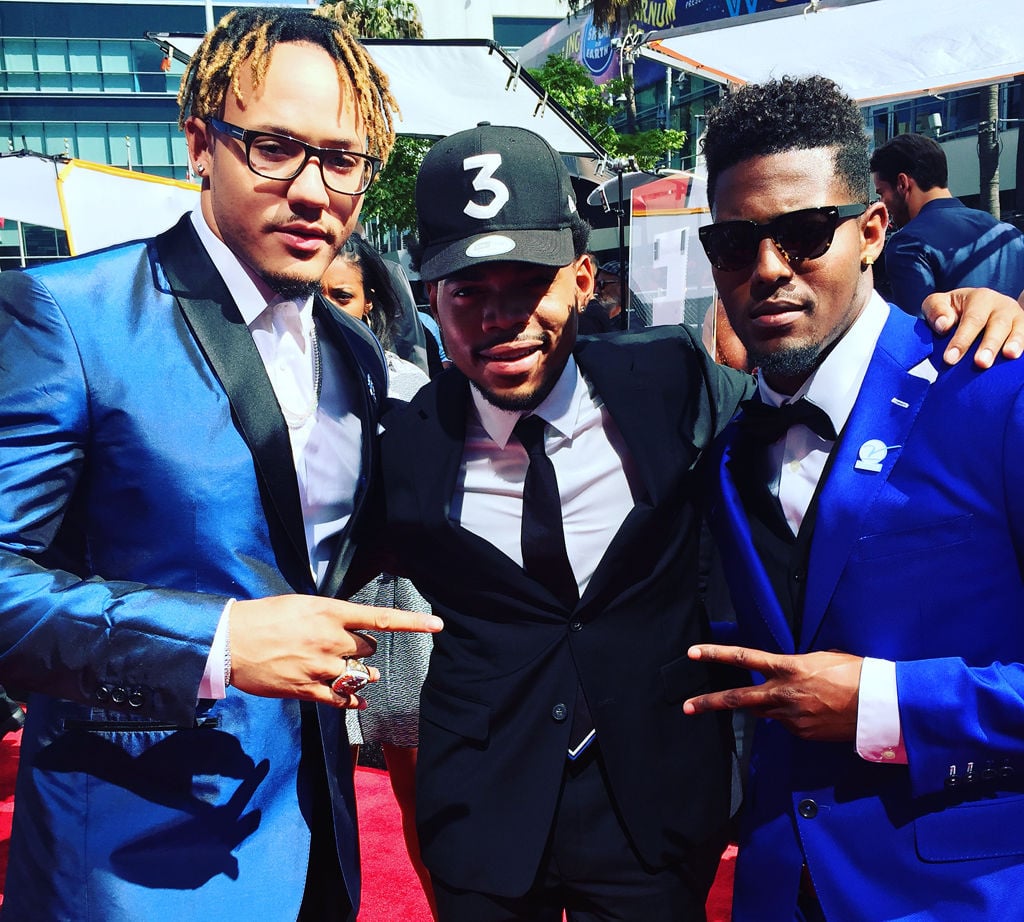 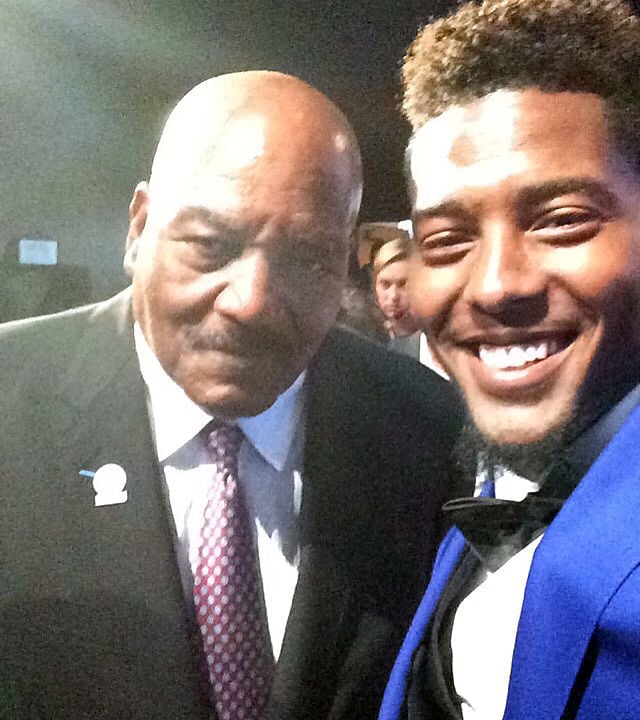 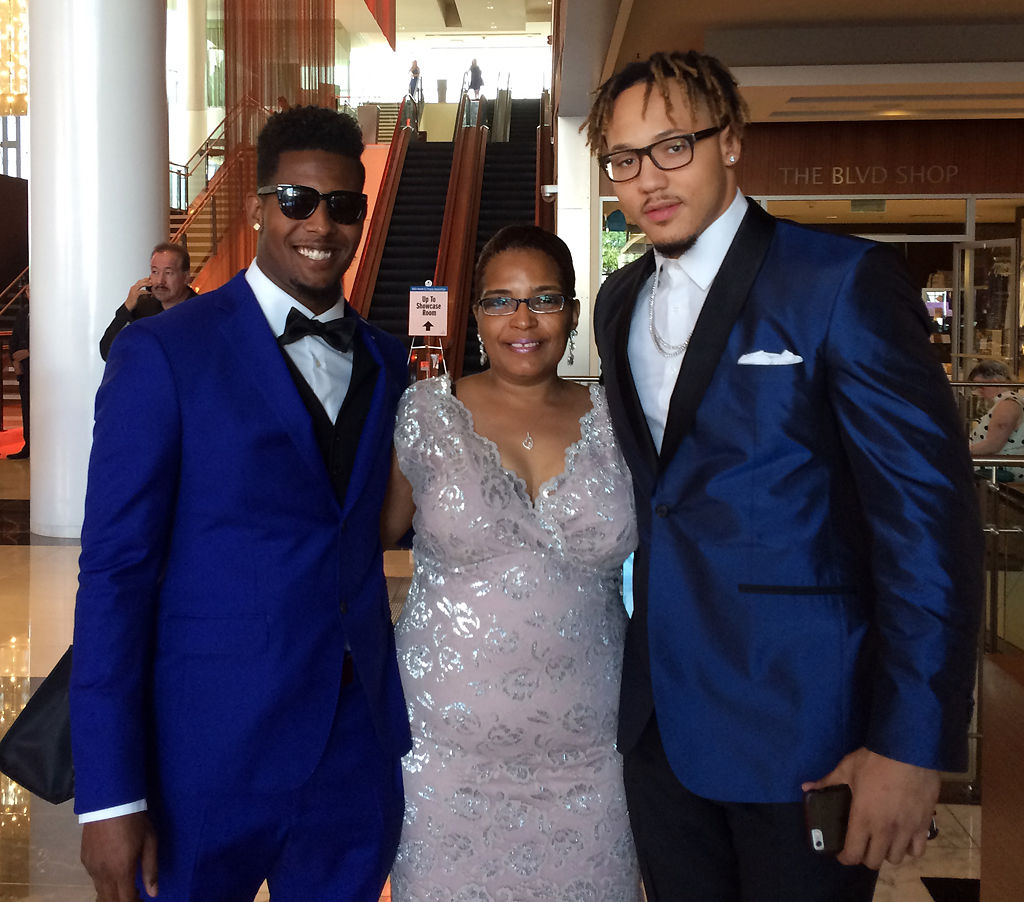 Former Missouri football captain and boycott leader Ian Simon, left, poses with his mother, Daphne Simon (center) and former Missouri defensive end Shane Ray before the ESPY Awards on July 13, 2016 in Los Angeles.  Simon attended the awards as a representative for the Missouri football team, which won an award for its protest of conditions on the MU campus.

Former Missouri football captain and boycott leader Ian Simon, left, poses with his mother, Daphne Simon (center) and former Missouri defensive end Shane Ray before the ESPY Awards on July 13, 2016 in Los Angeles.  Simon attended the awards as a representative for the Missouri football team, which won an award for its protest of conditions on the MU campus.

Safety Anthony Sherrils, receiver J’Mon Moore and defensive end Charles Harris had organized a meeting on Nov. 7, 2015, around noon in the Gaines/Oldham Black Culture Center. About 15 players were there, Simon said, to “gather information.”

Simon learned the people who stood in front of former UM System President Tim Wolfe’s car during the 2015 homecoming parade weren’t just a collection of black students. They were a unit.

After about 40 minutes, Simon said, the players went to quarterback Marvin Zanders’ home. They assembled in the living room and decided they needed to do something. By mid-afternoon, they picked a boycott — in part because they wanted a fast result, but also because they had no other ideas.

The players tasked Simon and Harris with calling coach Gary Pinkel to inform him of their decision, and the two men sat for about 15 minutes, phone in hand, nervous. Are we going to make this call? Simon thought. Who’s going to press the button?

When the men did call, their talk with Pinkel lasted about five minutes. Simon compared it to breaking bad news to a parent — disappointing or upsetting at first, but not catastrophic.

“You could tell he was a bit shocked,” cornerback John Gibson said of Pinkel. Gibson was nearby Simon and Harris during the call. “But at the same time, he understood we were men. We were black men at the time, and it was affecting us, as well as other people on campus.”

Later that day, the players went back to the Black Culture Center. They met, for the first time, with Concerned Student 1950 member Jonathan Butler, who was five days into a hunger strike that would only end when Wolfe stepped down. They grilled Butler on whether he’d exhausted all other avenues of protest, Simon said, and Butler told them he had.

Then about 30 black football players posed for a picture, arm-in-arm with Butler, who stood near the center of the group.

Simon laughed, recalling the memory. The nighttime meeting drew a connection that he admitted was exaggerated — but also important. A fan of historical documentaries, Simon thought that day of black slaves who worked during the day and held private meetings at night.

“Just knowing the history of my people, of black people in America, I saw it as an opportunity to not let this go,” he said. “This was my opportunity to make a difference.”

Hours after Wolfe resigned on Nov. 9, Simon offered a similar sentiment. The fifth-year senior and team captain was the spokesman for one of the most radical recent forms of activism in college athletics.

“We just want to use our platform to take a stand as fellow concerned students on an issue,” he said in front of reporters from around the world.

Simon’s great-grandfather was a railroad brakeman in Eunice, Louisiana, with a noble dream. He wanted to build a home large enough that passing-through ministers could have a place to sleep.

When Simon’s grandmother, Hazel Simon, was growing up, her father would let other black railroad workers eat dinner and sleep at his home. Their lives as rail workers were nomadic, and they often couldn’t find motels that would rent rooms to them. By the time Hazel Simon went to school in the morning, the men were gone.

Hazel Simon’s mother was bold for the time, too. She’d take her daughter with her on train trips to Houston, Galveston and New Orleans. Hazel Simon called her a “standup black woman in the 1950s.”

“Someone should’ve come down to Eunice, Louisiana,” she said. “They would’ve found a Rosa Parks before Rosa Parks.”

Hazel Simon and her husband, Felicien Simon, are in their 70s, which means they entered adulthood in the late 1950s, the middle of the civil rights movement. She attended Grambling State University, a historically black college, for two years before moving to San Diego to be with her husband, who joined the Navy right out of high school. So the two grandparents weren’t in the South during the civil rights movement, but they still make sure to tell their grandchildren about the bravery of the people they knew during the era.

And when ESPN asked Simon — the only graduated leader of the football boycott and thus the only one who controlled his own media access — to partake in a special black history documentary earlier this year, his grandparents pushed him to do it. He was hesitant at first because he wanted his former teammates to be with him. But the grandparents again talked about the civil rights movement, and they told him how now, just like any other time, someone needed to tell this story about black activism.

Today, Ian Simon is a custom suit salesman in Dallas. He works for the same company that made the three-piece electric blue getup he wore to the ESPYs, which he attended with his mother after being honored at ESPN’s Sports Humanitarian of the Year Awards. He was Missouri’s sole representative — and he’s glad his grandparents pushed him to be so.

He can list off all the people he met. Chance The Rapper, Julius Erving, Kareem Abdul-Jabbar and Billie Jean King are among them. Jim Brown was humble and gave an impressive handshake. Not all of them knew his name, but many of them, Simon said, told him how the boycott impressed them.

Being the spokesman for the Missouri football boycott allowed Simon to gain an appreciation for what he and his teammates did. Football doesn’t consume him anymore, and he has discovered “you don’t realize how big something is unless you’re able to take a step back.”

That process started soon after he left Missouri last winter. Simon was wearing a Missouri hoodie while having a beer with his dad at a restaurant, and a black man walked up to them. The man said he was an MU grad. He told them he was proud.

Crockett’s arrest and subsequent suspension, in a vacuum, mean nothing. The game he’ll miss Friday, Missouri-Arkansas, isn’t a rivalry. And Missouri was probably going to lose, even with Crockett playing, to finish a three-win season.

Astros, Red Sox look ahead in wake of sign-stealing scandal

Brignone and Vlhova share GS win, 0.01 ahead of Shiffrin