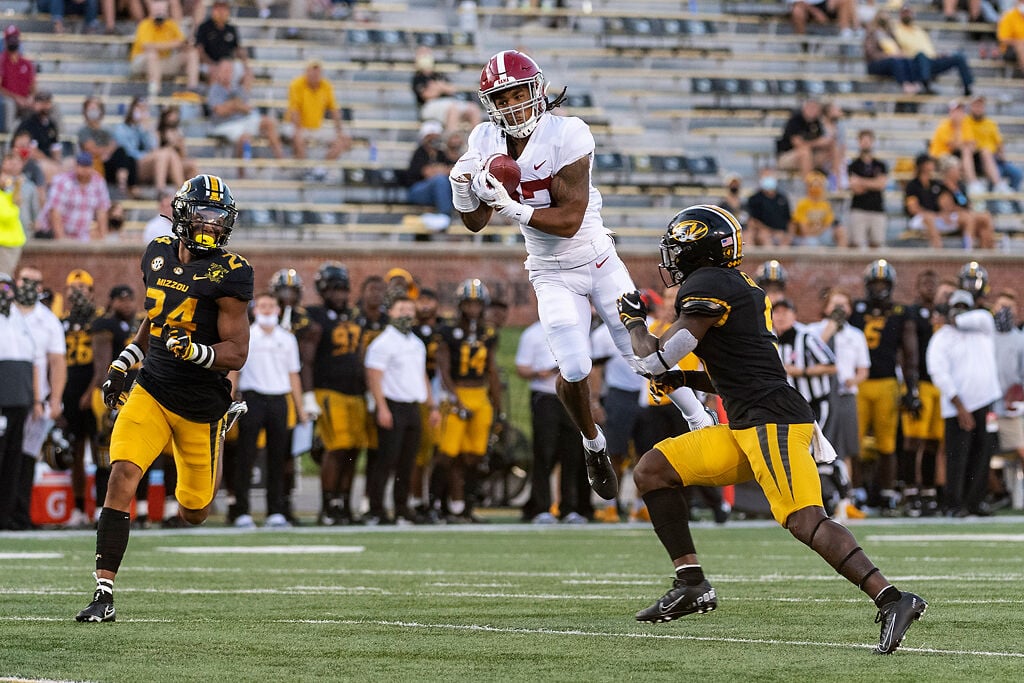 Alabama wide receiver Jaylen Waddle, center, pulls down a reception between Missouri’s Tyree Gillespie, right, and Ishmael Burdine during the first quarter of the second-ranked Crimson Tide’s 38-19 victory over Missouri on Saturday at Memorial Stadium in Columbia. 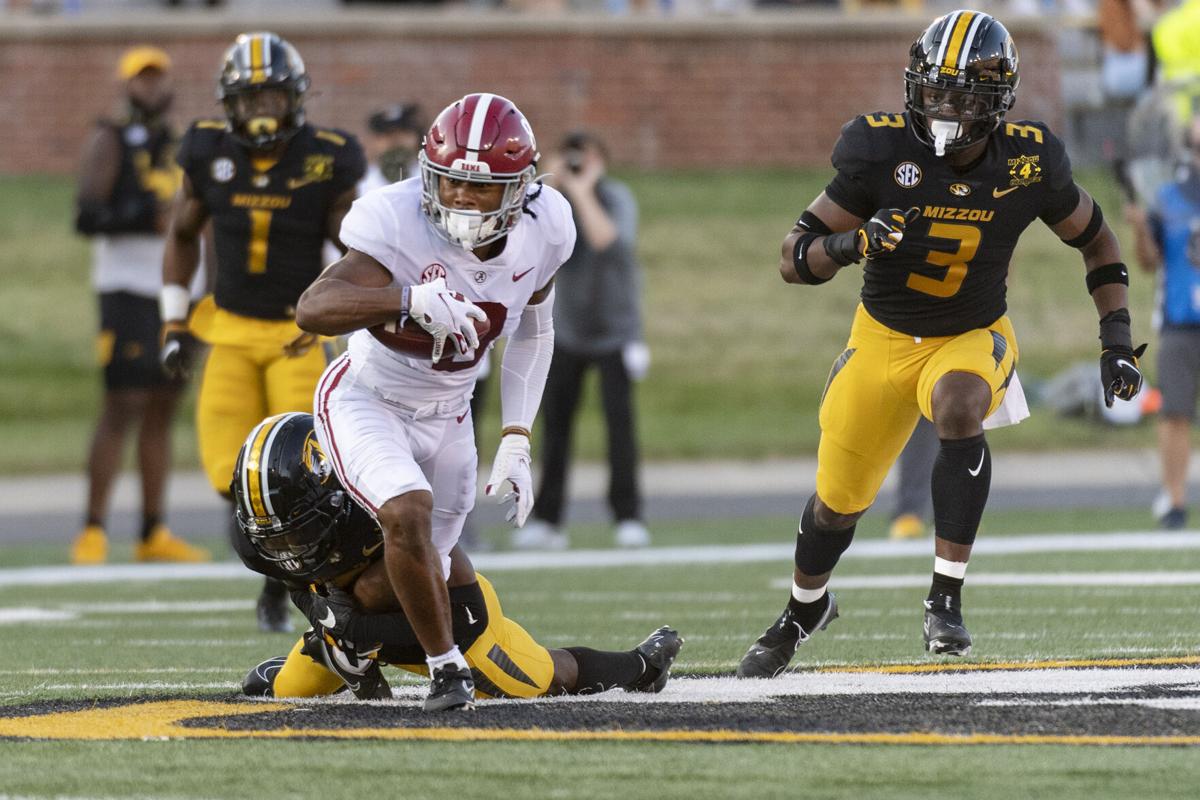 Alabama wide receiver John Metchie III, center, is tackled by Missouri’s Jarvis Ware, left, during the first quarter of the second-ranked Crimson Tide’s 38-19 victory over the Tigers on Saturday at Memorial Stadium.

Alabama wide receiver Jaylen Waddle, center, pulls down a reception between Missouri’s Tyree Gillespie, right, and Ishmael Burdine during the first quarter of the second-ranked Crimson Tide’s 38-19 victory over Missouri on Saturday at Memorial Stadium in Columbia.

Alabama wide receiver John Metchie III, center, is tackled by Missouri’s Jarvis Ware, left, during the first quarter of the second-ranked Crimson Tide’s 38-19 victory over the Tigers on Saturday at Memorial Stadium.

Before he even talked about his first game as a head coach, Eliah Drinkwitz was quick to put the last seven months into perspective.

“To even have a football game tonight,” he said, “was certainly something. ... But, bottom line, we didn’t play well enough on either side of the ball or in special teams to win the game tonight.”

The Drinkwitz debut was quickly spoiled Saturday evening, as his team failed to “eliminate the negative plays,” he said, en route to a 38-19 defeat at the hands of the No. 2 Alabama Crimson Tide.

“We’ve got to execute, and we can’t have self-inflicted wounds,” he said. “And that’s really what happened to us tonight.”

Most notably, Drinkwitz pointed to the Tigers’ two turnovers and an inability to force the Alabama offense off the field (the Tide was 9 for 14 on third down conversions), but he also hit on the fact that his quarterbacks needed to do better.

Oddly enough, the quarterback position still felt like somewhat of a question mark just a few hours earlier, at least for those outside the program. Drinkwitz told reporters this summer that he wouldn’t name his starter ahead of Week 1, and that proved to be the case.

However, as some could only predict, junior transfer Shawn Robinson was the first quarterback to take the field for the Tigers on Saturday. He finished the night 19-of-25 with 185 yards passing and one touchdown. He also found 10 different players for receptions — including himself. However, he wasn’t the only MU quarterback to see the field against Alabama.

Redshirt freshman Connor Bazelak also helmed the offense for a couple of drives Saturday, leading the Tigers to their final touchdown, with a 7-yard scramble, as the clock expired. He finished the night 7-of-14 with 68 yards passing, 12 yards on the ground and the rushing TD.

Drinkwitz said both Robinson and Bazelak had “flash points” in the loss, but he noted that a lot of the negative plays came from his two QBs. Specifically, getting rid of the ball quicker and not taking “disappointing” sacks.

“That’s really the thing that we’ve been preaching all fall camp, is we’ve got to stay away from the negative plays,” Drinkwitz said. “And both quarterbacks did some really good things, but they’ve got to eliminate the negative plays in order for us to be successful offensively.”

Robinson said better decisions need to be made at quarterback, specifically eliminating “bonehead plays” by taking care of the ball and knowing when to throw it away.

While the mistakes under center largely showed themselves in flashes, the mistakes on defensive seemed more blatant.

The Crimson Tide’s wave of offense finished the evening with 414 yards and five touchdowns. They averaged 6.1 yards a play and 13.2 yards a completion — largely thanks to a man named Jaylen Waddle.

“Crud, that guy’s a heck of a player,” Drinkwitz said of Waddle.

The Missouri defense tried double-teaming and mixing in zone coverage as well to trip up the Alabama junior, Drinkwitz said, but the efforts were fruitless. Waddle had the third-most yards of any offensive player Saturday, finishing the night with 134 yards receiving and two touchdowns on eight catches.

Drinkwitz also said the defense tried to “heat up the quarterback” in an effort to slow down Waddle, but not only did the pass rush fail to hinder him, it failed to put pressure on Alabama quarterback Mac Jones. The redshirt junior finished 18-of-24 with 249 yards passing and two touchdowns.

However, while this Missouri team found a lot of “negative plays” to fix Saturday, its first-year head coach wasn’t completely discouraged by his team’s loss.

Perhaps most surprisingly, Drinkwitz was impressed by the play of his offensive line, which he said at one point had five different left guards in five days during the offseason. In total, the Alabama defense had two sacks and nine tackles for loss against the Tigers, which led to 56 yards lost.

He also noted someone he needs to feed the ball to more: Larry Rountree III. The senior finished the night with 67 yards rushing on 14 attempts.

Rountree said that — between the fumbles and finishing drives — the Tigers know they have a lot to improve on.

“We know it’s not good enough,” he said of Saturday’s performance. “But it’s a start.”

The Tigers head to Knoxville, Tennessee, next week for a matchup with No. 16 Tennessee, a 31-27 winner Saturday at South Carolina. Kickoff is set for 11 a.m. Saturday.

Dream close to being sold, taking Loeffler out of WNBA