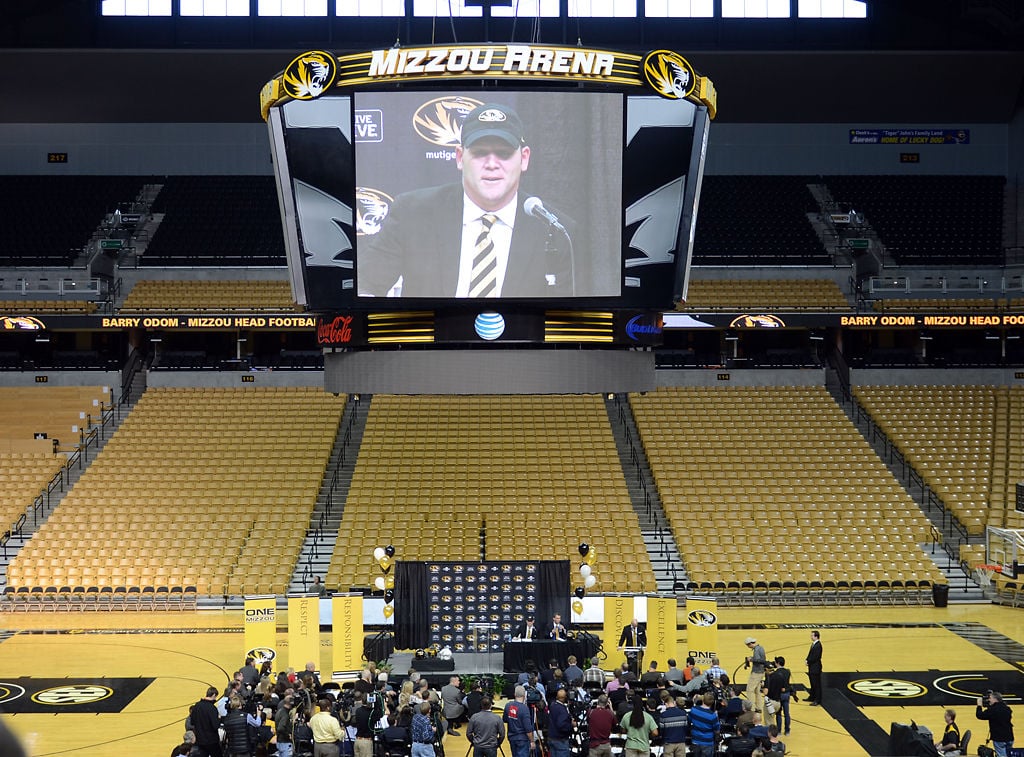 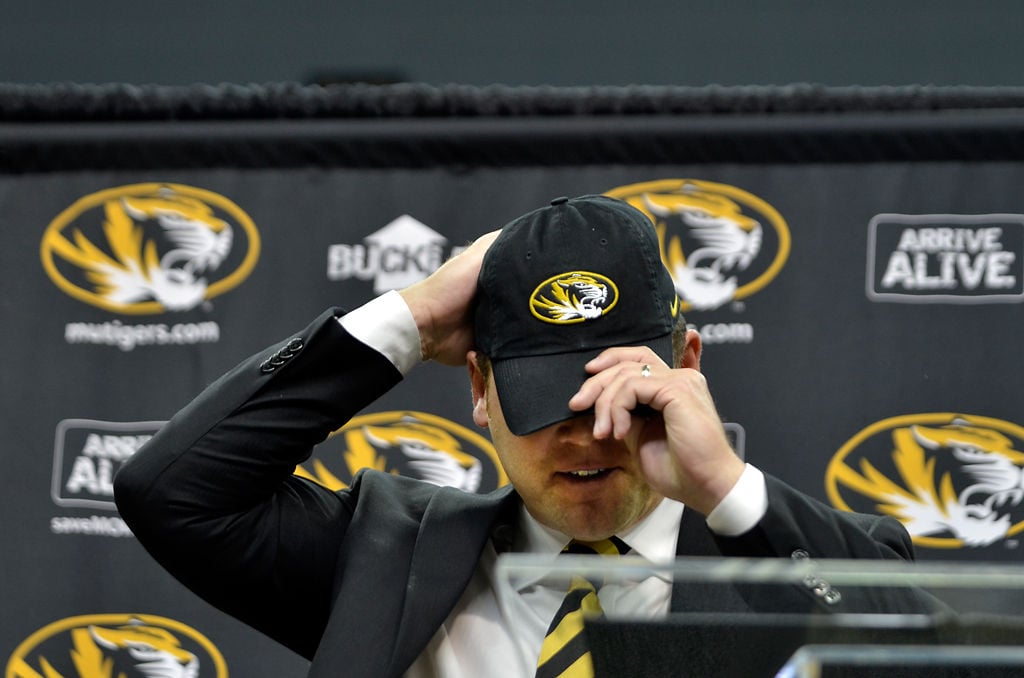 Barry Odom adjusts the hat that Missouri Athletics Director Mack Rhoades gave him during the press conference. The conference was held after Odom was announced as head football coach. 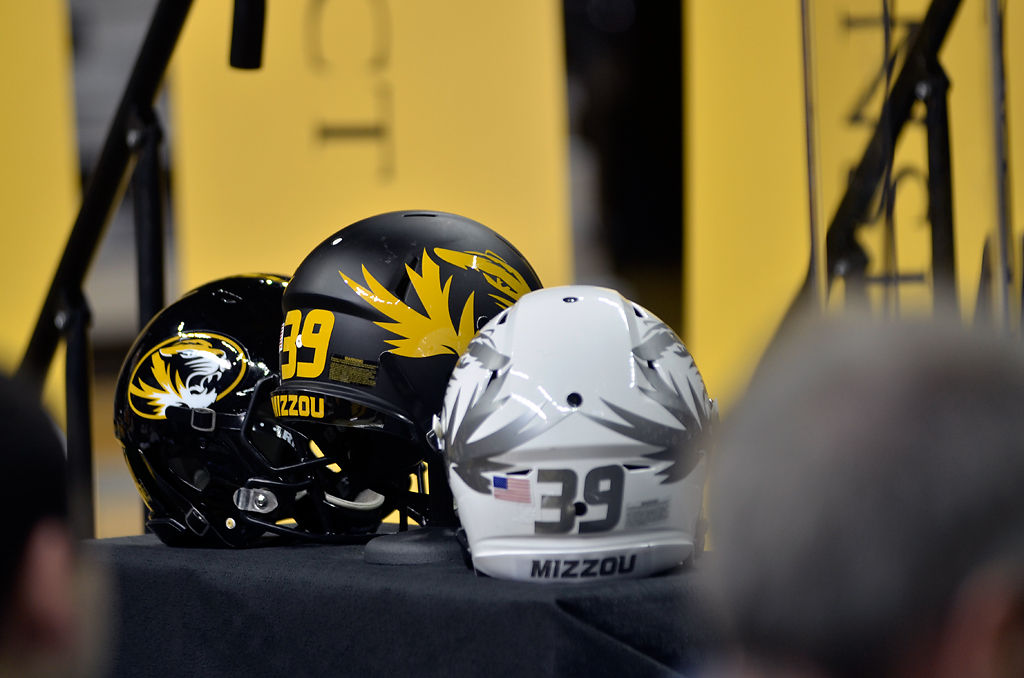 Missouri football helmets with the number 39 line the stage during Barry Odom's press conference on Dec. 4, 2015. Odom played for Missouri as a linebacker during the 1996-1999 seasons. 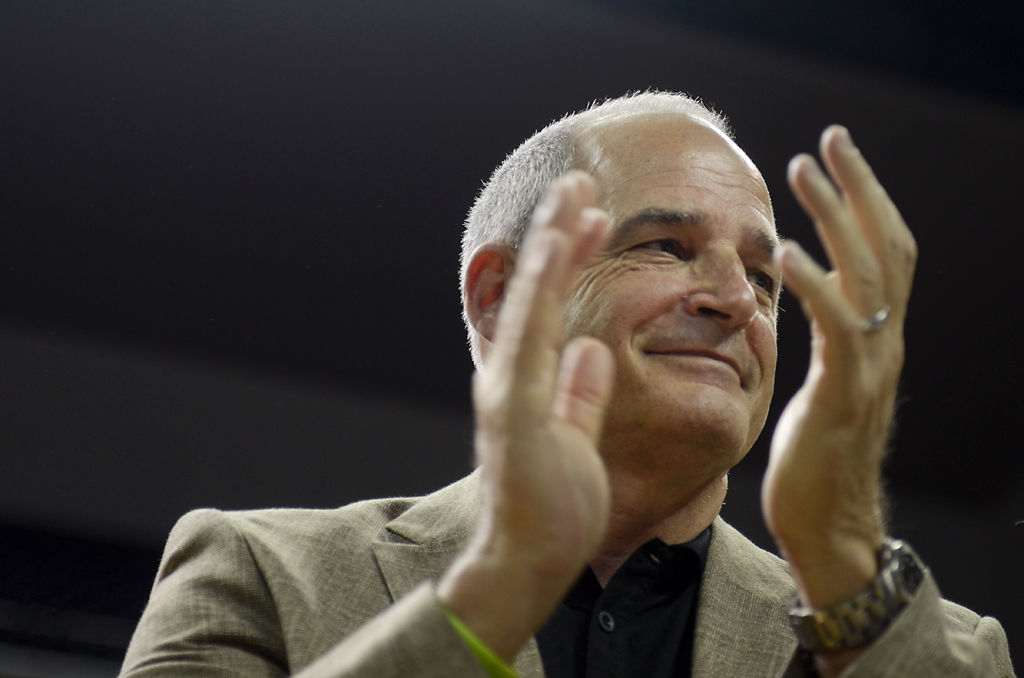 Barry Odom adjusts the hat that Missouri Athletics Director Mack Rhoades gave him during the press conference. The conference was held after Odom was announced as head football coach.

Missouri football helmets with the number 39 line the stage during Barry Odom's press conference on Dec. 4, 2015. Odom played for Missouri as a linebacker during the 1996-1999 seasons.

When Missouri’s new head football coach grows tired from talking a lot, a crease shows in his upper lip. His voice lowers an octave. And his wife knows what’s up.

“You’ve been talking a lot,” Tritia Odom playfully recalled telling him earlier this week, after one of two long interviews with Missouri athletics director Mack Rhoades. And there’d been others interviews, too, with Memphis — the school at which he spent three years as a defensive coordinator. Those Tigers, too, considered Odom as their next head coach.

So it was a tiresome week, the kind that gives deep voices and lip creases. The kind that was so exhaustive, Tritia Odom couldn’t even remember when her husband first interviewed with Rhoades to replace Gary Pinkel as Missouri’s head football coach.

By Friday, though, the usual tells were gone. Barry Odom, a stout man with broad shoulders who stands just about 5-foot-9 — the build of a football lifer who succeeds by grinding, playing three seasons of high school football with a torn ACL, saving a man’s life in a wild fire, making up a half-lap in the final leg of a track and field relay … and then going to prom — offered only a slight smile as he sat with his family at his introductory press conference at Mizzou Arena.

“It didn’t hurt that this was his dream job,” Rhoades said.

The only negative vibes at Mizzou Arena on Friday came from one of his two preteen sons, who said toward the end of a television interview his defensive-minded father would maybe “have some trouble offensively.” He promised he was joking.

It would seem likely that Missouri picked a man who, as long as he’s wanted, will remain in Columbia. At 39 years old, he’s the ninth youngest head coach in the Football Bowl Subdivision. Though he’s always wanted to be a head coach — and Missouri, he and his wife both said, always seemed like the ultimate destination — this job is coming perhaps sooner than he and his family would’ve anticipated.

Barry Odom said Friday he didn’t leave Memphis after the 2014 season to become Missouri’s defensive coordinator with the absolute belief he’d succeed Pinkel. And few predicted the Tigers would need a successor just a season later. Odom said he had no timeline for when he hoped to be a head coach.

His wife said she and her husband figured he would need to be the head coach at another school first and then try to come back to Missouri — eventually. But they were wrong. Odom, Rhoades believes, is the right choice now.

“Did I ever (think) that he might be the guy down the road?” Pinkel asked. “To be honest with you, yeah, because he’s got it.”

That “it” for Rhoades, was a “gut feeling,” one he said was put to the test in marathon meetings with Odom. Though Rhoades said last month he’d be mostly looking at people with prior head coaching experience, Odom showed enough mettle in the grilling sessions. The former Missouri linebacker showed frustration at times, which is something Rhoades wanted to see.

Odom told his father, Bob Odom, the news around 4:30 p.m. Thursday. The elder Odom drove from Oklahoma to Columbia.

Missouri, Bob Odom said Friday, was the ultimate job for his son, who told fans and press that he believes “we’re all brought here for some reason together.” The younger Odom had originally committed to Oklahoma State out of high school, until a coaching change caused him to look elsewhere, to Missouri. And ultimately, Missouri ended up being where he mostly stayed. He was the head coach for two seasons at Rock Bridge High School. He went back to the Missouri football program as graduate assistant. He’s been involved with Missouri football, in some fashion, for 14 seasons.

“He knew,” said Tritia Odom, “of any candidate, he would know the most about this place.”

She and her sons sat on a media room stage in Mizzou Arena after Barry Odom’s press conference. They were all smiles while they answered questions.

“I’m not used to interviews,” Tritia Odom said as she stepped off the stage.

Soldier Field showdown is another Chicago chapter for Irish

Rodgers preps for 49ers, who asked about him before draft

Gator Chomp: Ledecky heads to Florida to work with Nesty