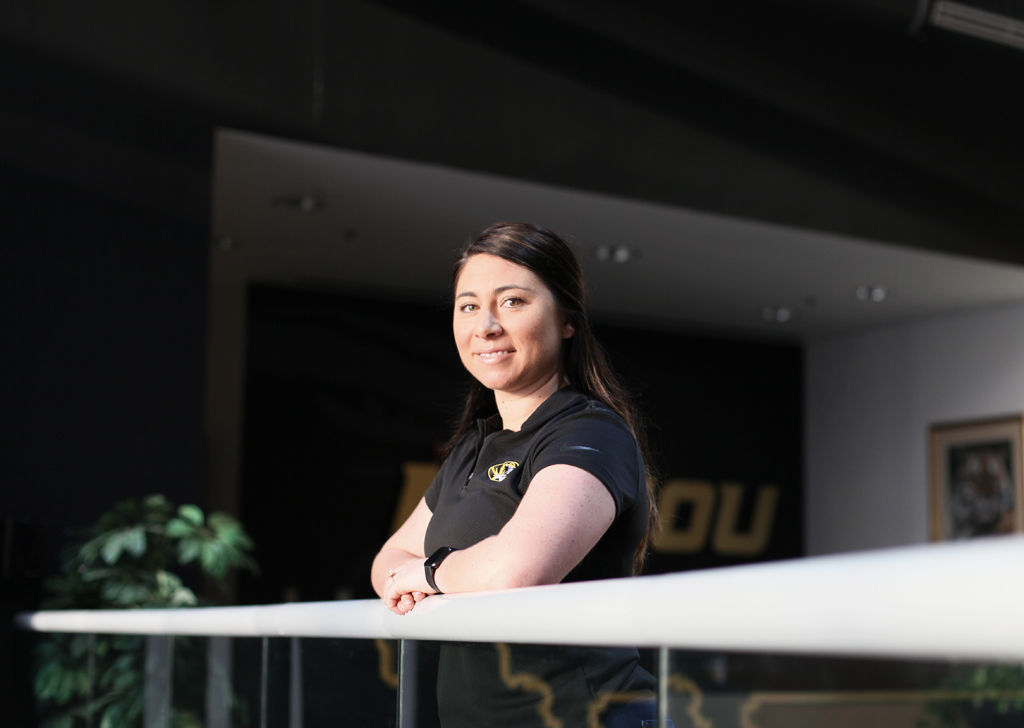 Brittany Boehm, Missouri football’s director of operations, goes about her morning routine at the Mizzou Athletics Training Complex on Monday. She oversees the coordination of team travel, the football program’s budget and facility scheduling and planning. 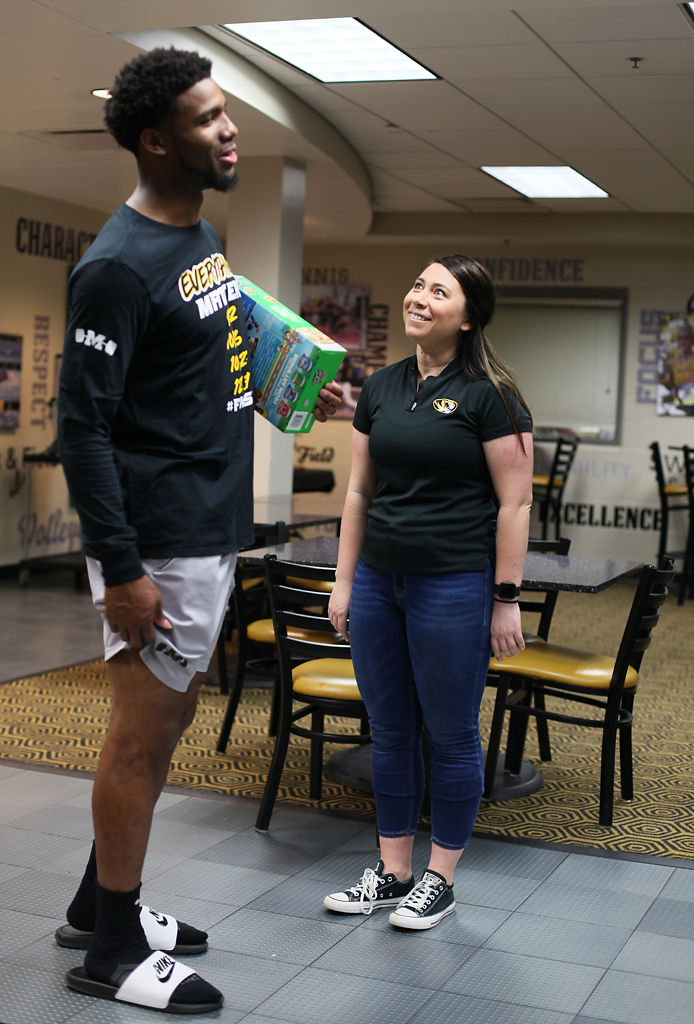 Brittney Boehm chats with recent transfer Kelly Bryant at the Mizzou Athletics Training Complex on Monday. Boehm came to Missouri from her home state of California, where she played soccer for San Jose State during her undergraduate years.

Brittany Boehm, Missouri football’s director of operations, goes about her morning routine at the Mizzou Athletics Training Complex on Monday. She oversees the coordination of team travel, the football program’s budget and facility scheduling and planning.

Brittney Boehm chats with recent transfer Kelly Bryant at the Mizzou Athletics Training Complex on Monday. Boehm came to Missouri from her home state of California, where she played soccer for San Jose State during her undergraduate years.

Brittany Boehm acknowledged every smiling face she saw and every “Good morning, Brittany” she heard as she strolled through the Mizzou Athletics Training Complex on Friday. She made pit stops in the weight room, the indoor football practice field and the dining hall. In her office, athletes, faculty and staff members popped their heads through the door to ask a question or to simply check in. It was just a normal day at work as Missouri’s director of football operations.

Boehm came to Columbia in 2015 and served as the director of soccer operations at MU for two years while working toward her master’s degree. She received her bachelor’s degree from San Jose State University in California. During her years there, she was part of the Student Athlete Advisory Committee (SAAC) and worked up the ranks to president by her senior year, an experience that introduced her to the idea of working in athletics administration. After college, she spent almost a year and a half as an administrative assistant and then a soccer coach back at San Jose State.

Although she played college and semi-pro soccer after graduating, Boehm says there are few opportunities in sports for women to build a career. This led her to pursue a career in sports administration, and ultimately, brought her to the University of Missouri to continue her education in that field. 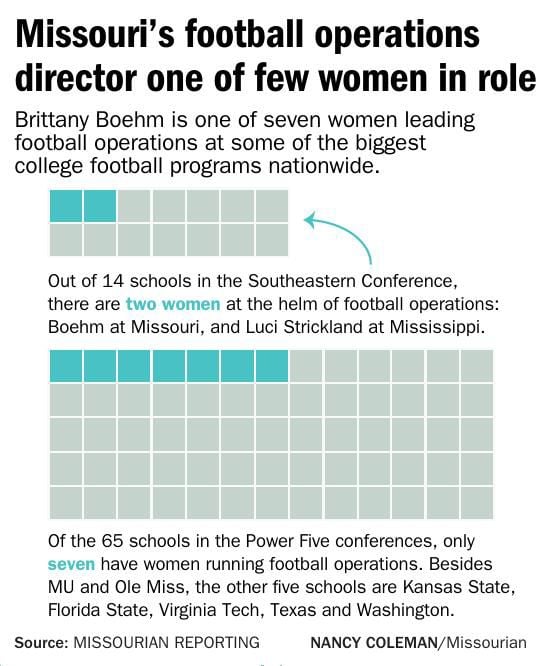 This interview has been edited for length and clarity.

When did your love for sports begin?

“My family is a huge sports family on both sides so, it’s always been there. I’ve played soccer since I was 5, competitive since I think I was 11. So, I just played soccer all my life. I’ve played on different teams overseas, professionally — semipro. Soccer was a chance for me to get an education. I know that sounds really bad, but I didn’t have to pay for it — I was really blessed to have that opportunity.”

Have you always seen yourself taking a leadership role?

“No, that’s just me naturally. I was captain in club soccer, president of the SAAC, captain in college, captain on my semipro team. I’ve always told myself, ‘Don’t be average.’ My dad was like that. Whenever we brought C’s home from school, he’d say, ‘I didn’t raise any average kids!’ So, C’s were not acceptable in our household. B’s were better. A’s are great — they were expected. So yeah, when I got done, I realized I should probably do something job-wise, so I went back to my alma mater and, since I had developed relationships there, they accepted me with open arms.”

“Whew! Luckily, being at a mid-major D-I — that’s what San Jose State is — everyone on staff has to have a role, on game day, with football. I did a lot of external operations — stewardships, things of that nature. I kind of saw the maximum ‘Hey, you-have-to-be-all-in’ kind of thing. It’s a lot of high-paced stuff, decision-making pressure. So, it was a lot in the sense that the transition was, ‘OK, I’m under a microscope. What I do is being watched, and what I do means a lot.’ So, that expectation for me was, like, I don’t want to disappoint the players, the staff or coach Odom. It was a lot of self-evaluation on what I thought was my maximum effort to what, really, my maximum effort has to be now.”

So, essentially, the stakes are higher?

“Yeah, I mean, just watching our players and being pulled in a million different directions. There’s so many resources I have to oversee, and it’s overwhelming at times. It’s like you think you’re checking all the boxes, and then you didn’t realize that a box in the bottom right hand corner was missed. You’re like, ‘Dang it! I forgot about that box!’”

Is there more internal pressure, or would you say there’s more public scrutiny, as well?

“Well, I’m a control freak, so I place a lot of blame on myself. But there’s so many moving parts within football that you have to be really ‘Type A’ and you have to be organized. I think that because I put so much pressure on myself, outsiders encourage me to ease up on myself. I mean, I broke through the glass ceiling. ... So, for me, if I mess up — and this is me internally — then, well, ‘She just doesn’t get football.’ No one says that, but that’s what I think if I mess up.”

Would you say there’s any other challenges you face as a woman in this arena, so to speak?

“Well, I will say this: Coach Odom is amazing. I guess he doesn’t see me as, ‘Hey, you’re a female.’ He never treats me like that or anything. It’s like, the outside world. I was at the AFCA (American Football Coaches Association) convention and I had my Mizzou logo on and this guy asked, ‘Does your husband work for Mizzou?’ I was like, ‘No,’ and then he asked if I was an athletic trainer. I told him I’m the director of football operations and he goes, ‘Oh, but you’re a girl.’ I said, ‘Yep, I’ve got female parts.’ It’s challenging to not take it personal because if I did, I’d make myself upset on a frequent basis.

“But, it gets a little frustrating at times. I’m always the one who has to assert myself in conversations. In society if you’re assertive as a female then you’re kind of — I don’t know how to describe it — if I’m assertive, I’m rude. And, I’m a very blunt individual. Sometimes on the outside world, I’m kind of seen as that ‘angry female.’ When I’m assertive, I’m a ‘B.’ If a guy’s assertive, he’s just doing his job. It’s frustrating at times; but again, I can’t dwell on it. I just have to do my job and let my work be my foundation.”

What does your day-to-day look like? What is work?

“Well, I’m usually up at four in the morning. I have to have at least an hour to myself, so I try to work out and then I’m usually sitting at my desk at 6 a.m. getting caught up on emails, looking at events that I have — I have an eight-week projection for all the events I have to plan. For example, I just did a two-month project of getting all of (the players) custom suits. That’s been a challenge, but it’s been great. It’s rewarding to have the guys put them on and be like, ‘Do I drip too hard?’ and I’m like, ‘OK, then.’

“(My day includes) a lot of players coming up and asking for help and telling me about things going on. At first I was a little annoyed when I got on the job and they said, ‘Oh, you’re like our football mom.’ And I was like, ‘No, I’m not. I’m a professional!’ But then, taking a step back and seeing a lot of players that come on our recruiting trips, a lot of the guardians or the parents are their moms, their grandmas, their aunts. A lot of our players have had a female who has kind of been the center of their world. When I was around recruiting, I realized, ‘Man, it’s really all about their mama.’ That’s when I really embraced it. I have a couple of players who call me Mama B., and I love it. It’s so heart-warming.”

It’s so interesting how, on the one hand, the connotation of the way someone says something can be so insulting, but in another way it can be so empowering.

“Oh yeah, absolutely. And, people are like, ‘Wow, you’re really passionate about your guys.’ Yeah, because I care for them, I adore them, I respect immensely what they do. Being a soccer player, I thought I did so much. But they have photo shoots. They have appearances. They have to do weights and practice on the same day. Then they have to do meetings, and then it’s encouraged that they break down their practice films and their game day films. It’s just crazy. I have a blanket over there because sometimes players will come in and take naps on the couch. I just have so much respect for them.”

What would you say is the most rewarding part of your job?

“Them. I’m going to be married in July and — to share something really personal — my fiance and I don’t plan on having kids. So whenever someone goes, ‘Oh, so you’re going to get married and have kids?’ I’m like, ‘Yep, I’ve already got 117 of them.’ It’s just rewarding. I am doing something that not a lot of people can say they do from a female’s perspective.

“Other females will come up and say, ‘I want to do what you do someday, but I have this challenge and that challenge.’ So, all the times I get mad or get a little sensitive to things, I have to remind myself, ‘You’re pushing through for others.’ So that’s the other rewarding thing is that I know I’m setting a path for other females that want to do this.

Breaking the Boys Club highlights the impact that women and girls in Columbia have had on local athletics through playing, coaching and leading.

Woods in a better place heading into this PGA Championship

Defending champ Rafael Nadal to miss US Open amid pandemic